Stevie May scored his 50th goal for Saints this afternoon as Callum Davidson’s side defeated Aberdeen 1-0 in the Granite City.

Saints best chance of the first half fell to Callum Booth but he saw his low curling effort go wide.

Glenn Middleton thought he had given Saints the lead on 66 minutes however, his close-range finish was chalked off for offside.

The only goal of the game came with 6 minutes remaining as May’s low strike from 18 yards squeezed past Dons keeper Joe Lewis to secure Saints first cinch Premiership win of the season.

Next up for Saints is a trip to Dens Park on Wednesday evening for a Premier Sports Cup Quarter-final match against Dundee, kick off 7:45pm.

It was the first of three away games in a week for Saints today as they made the trip up the east coast to Aberdeen. Callum Davidson made four changes to the team which started against Rangers last Saturday as Hayden Muller, Reece Devine, Ali Crawford and Liam Craig all dropped to the bench. They were replaced by Efe Ambrose, who was making his debut after signing for the club last week, Callum Booth, Murray Davidson and Glenn Middleton. Aberdeen lost 2-0 at Motherwell last weekend and manager Stephen Glass made three changes to his starting eleven. David Bates, Austin Samuels and Jay Emmanuel-Thomas came in to replace Declan Gallagher, Matty Longstaff and Marley Watkins.

Christian Ramirez got the match underway for the hosts and they started the game strongly and were awarded a free kick out wide on the left following a foul on Ramirez by Shaun Rooney. Jack MacKenzie took the free kick and his delivery into the box was met by David Bates but his header was cleared by the Saints defence. Then shortly after The Dons created another chance as Jay Emmanuel-Thomas was inches away from connecting with Lewis Ferguson cross into the box from the left at the back post.

After weathering the early pressure from the hosts Saints were starting to come into the game as they passed the ball about well and on 18 minutes Rooney almost got on the end of a cross into the box but Dons keeper Joe Lewis came out well to gather.

Aberdeen were looking dangerous down the left and on 27 minutes Austin Samuels broke to the by-line before sending over an inviting delivery into the Saints box but luckily for Saints no one in an Aberdeen shirt was able to get on the end of it. Then 3 minutes later a Calvin Ramsay corner from the left was met by Ramirez but the American forward put his header wide.

Saints were awarded a free kick on 32 minutes after Murray Davidson was stopped in his tracks by Emmanuel-Thomas and the former Livingston man was booked for the foul. Middleton took the free kick and he played it short to Jamie McCart and the defender unleashed a long-range effort at goal which went high into the Richard Donald Stand. 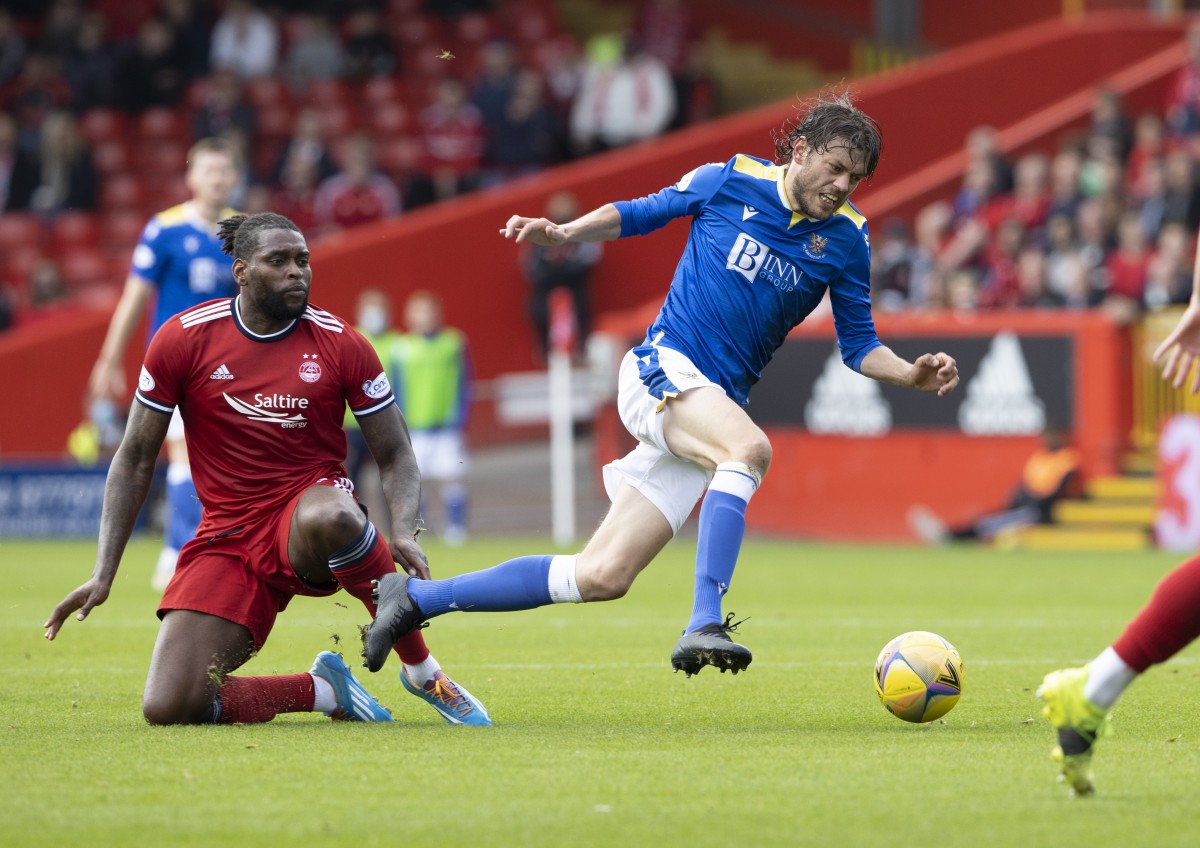 PHOTO: Murray Davidson is brought down by Jay Emmanuel-Thomas

With 9 minutes of the first half Samuels got a sight of goal as he unleashed a shot from about 25 yards which took a slight touch off Davidson but Clark comfortably gathered the ball.

On 41 minutes David Wotherspoon setup Callum Booth but he curled his strike wide of Lewis’s left-hand post. Then deep into the 2 minutes of stoppage time Booth got another sight of goal but his effort didn’t trouble Lewis. 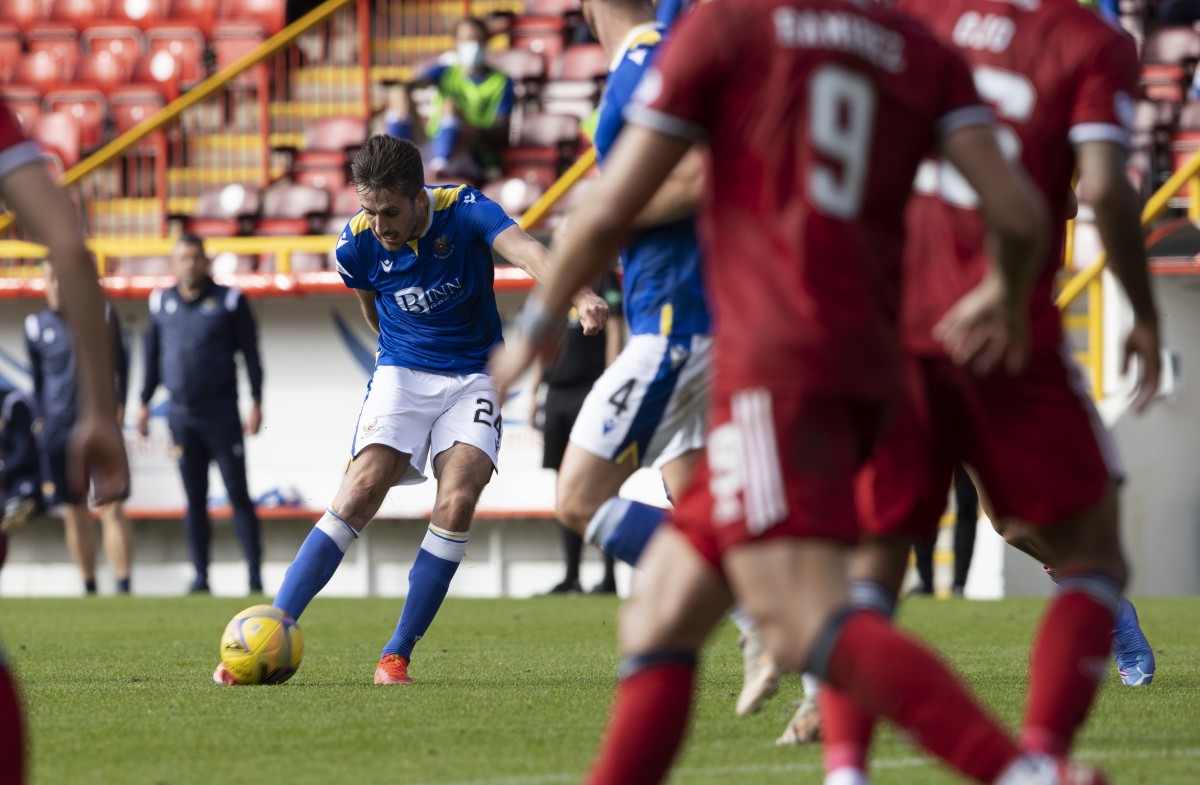 Aberdeen started the second half on the front foot and on 53 minutes Samuels saw his effort saved by Clark. Then shortly after The Dons got a big chance to break the deadlock as MacKenzie sent an inviting ball across the face of the Saints goal which Ramirez was inches away from making a connection with.

Another MacKenzie cross on 55 minutes picked out Emmanuel-Thomas but his looping header was well held by Clark.

Aberdeen continued to create opportunities and a Ramsay corner on the hour mark was met by Ross McCrorie however, the header from the defender went wide.

Saints then made their first change of the game as Ali Crawford replaced Michael O’Halloran.

On 64 minutes, good play by Saints saw James Brown’s header forward brought down well by Chris Kane who then slipped the ball into the path off Glenn Middleton but his effort was turned behind for a corner by Lewis. 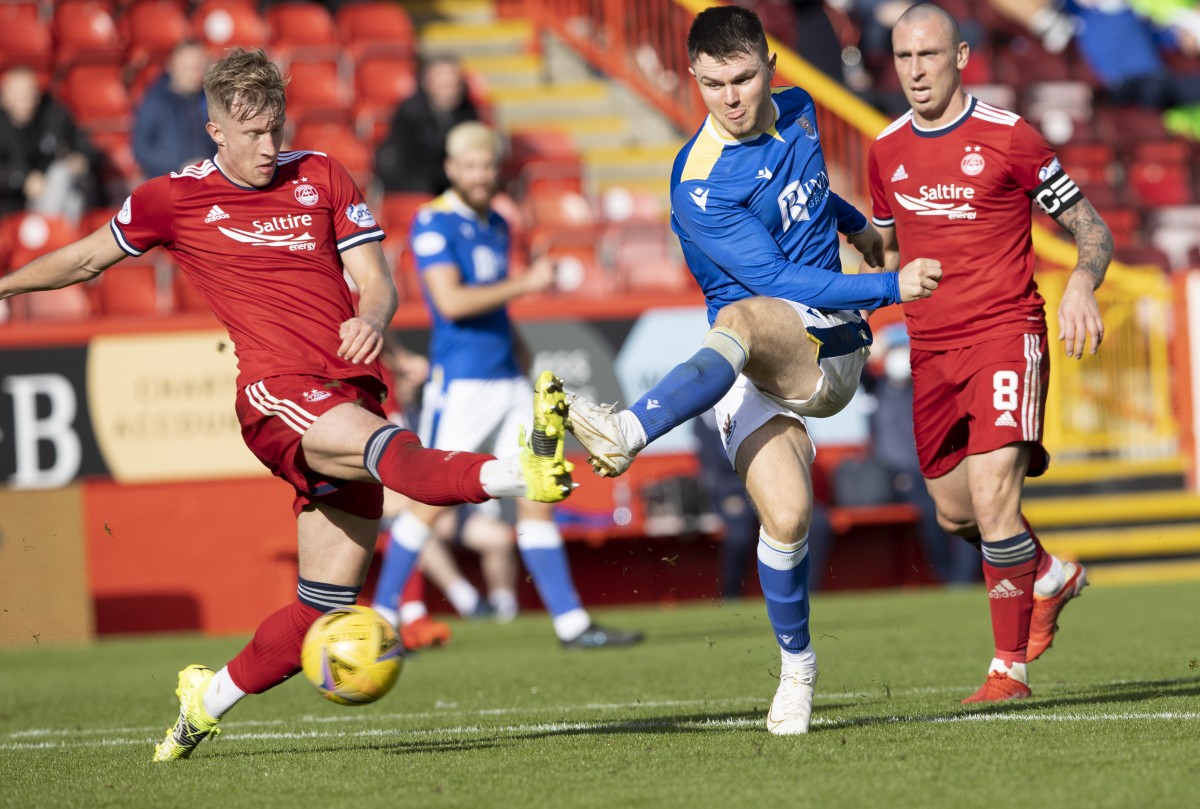 PHOTO: Glenn Middleton's shot is pushed behind for a corner by Joe Lewis

Then 2 minutes later Saints thought they had taken the lead as Crawford broke free down the left and his cross was flicked on by Kane to Middleton who knocked the ball home from close range however, the goal was ruled out as the on-loan winger was deemed to have been in an offside position.

Saints made another change on 69 minutes as Stevie May came on to replace Glenn Middleton.

Saints were now looking more of a threat going forward and a minute later Wotherspoon found himself in space on the edge of the box however, his strike went inches wide.

With 9 minutes remaining Saints were forced into a change as Eetu Vertainen came on to replace Chris Kane who had picked up a knock.

The breakthrough for Saints finally came on 84 minutes. May gathered a loose ball and he cut inside from the left before unleashing a low right footed effort from 18 yards which squeezed past Lewis and into the bottom left-hand corner of the net. 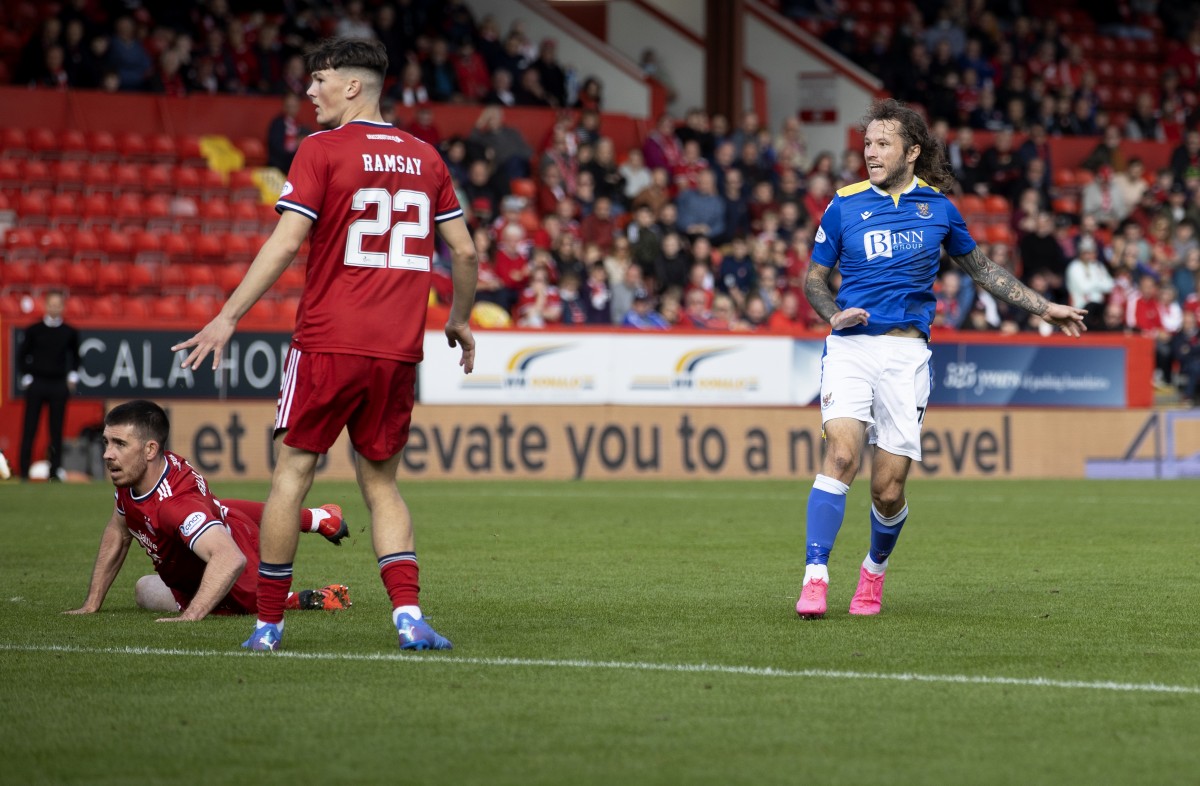 PHOTO: Stevie May scores the only goal of the game

Having used all of their substitutes Saints had to play the closing stages with 10 men after Murray Davidson had to hobble off as Aberdeen pushed for a leveller. The closest The Dons came to equalising was a Jonny Hayes header deep into the 5 minutes of stoppage time however, the Irish winger flashed his header over the bar as Saints saw the game out to leave Pittodrie with the 3 points.

Picture: Stevie May celebrates at full time with Glenn Middleton