David Wotherspoon scored twice and also got an assist as Saints defeated Arbroath 4-1 at Gayfield this evening.

Saints first goal of the evening came on the stroke of half time as David Wotherspoon tapped home from close range.

Arbroath started the second half brightly but once Saints made some changes they took control of the game. Jamie McCart scored Saints second goal as he planted a powerful downward header beyond Callum Antell. Wotherspoon then got his second of the game before Cammy Ballantyne made it four as he tapped the ball home after Antell couldn’t hold a Chris Kane effort.

Harrison Clarke pulled a goal back for Arbroath with 3 minutes remaining with a fine strike from 25 yards.

Saints are back in action on Saturday afternoon as they welcome Fleetwood Town to McDiarmid Park for their final pre-season friendly, kick off 1pm.

Saints continued their preparations for the new season as they made the trip to Angus this evening to take on Championship side Arbroath at Gayfield in a pre-season friendly. Saints drew 1-1 with Preston North End in their first public pre-season outing last Tuesday evening and manager Callum Davidson made six changes for this evening’s friendly. Elliott Parish, Hayden Muller, Reece Devin, Liam Craig, Craig Bryson and Callum Hendry came in to replace Zander Clark, Jason Kerr, Liam Gordon, Jamie McCart, Ali McCann and Stevie May.

It was a lovely sunny evening as Callum Hendry got the match underway for Saints. The Perth side started on the front foot but despite their early pressure they couldn’t trouble Callum Antell in the Red Lichties goal.

Elliott Parish was called into action on 10 minutes as he made an excellent save to deny Michael McKenna. Then less than 60 seconds later McKenna got another sight of goal but Parish made another fantastic save tipping the midfielder’s effort over for a corner.

It was an eventual couple of minutes for McKenna as he also ended up in referee Scott Lambie’s book for a foul on Michael O’Halloran.

On 20 minutes O’Halloran did well to beat his man out wide on the right before cutting inside. Murray Davidson then made a good run into the box, latching onto the ball but Antell was out quick to block the midfielder as Dick Campbell’s men cleared their lines.

Saints were finding the hosts hard to breakdown and on 29 minutes Colin Hamilton won Arbroath a corner but Liam Craig did well to head clear the delivery from former Saints player Gavin Swankie. Whilst up the other end Saints were awarded a free kick after Craig Bryson had been fouled and it was taken by Callum Hendry but his effort didn’t trouble Antell as he dragged it wide.

Then on the stroke of half time Saints took the lead. A long throw-in from Shaun Rooney broke to David Wotherspoon who slotted the ball beyond Antell from 6 yards.

Arbroath started the second half brightly and on 50 minutes Dylan Paterson cut inside before having a strike but his effort went over. Then 2 minutes later the hosts created another chance as Chris Hamilton cut the ball back to David Gold but the midfielder saw his effort go behind for a corner.

Arbroath were dominating the early exchanges of the half and Dale Hilson did well to beat the offside trap and he raced in on goal but his effort was turned away by Parish. The pressure on the Saints goal continued and next up McKenna sent over an inviting ball into the Saints box but luckily for Saints no one in an Arbroath shirt was able to get on the end of the midfielder’s delivery.

Saints were struggling to get out of their half and a poor pass by Callum Booth on 57 minutes was played straight to Chris Hamilton and he broke into the Saints box but his strike was turned behind for a corner by Parish.

3 minutes later Parish made yet another fine save this time to deny Tone Glenn Kusel Gabriel. From the result corner Parish couldn’t hold onto Paterson’s delivery from the right but Hendry made an acrobatic clearance to clear the ball off the line.

Good play by Hendry on 68 minutes saw the forward setup Rooney whose powerful strike at goal was turned behind for a corner. Wotherspoon took the corner from the left and he floated the ball into the box and McCart got up well to head the ball down into the ground before it bounced high into the roof of the net to double Saints lead.

Callum Davidson then made a couple more changes as Craig Bryson and Callum Hendry were replaced by Cammy Ballantyne and Chris Kane.

On 77 minutes Saints got their third goal of the evening. Substitute Chris Kane did well to hold the ball up on the edge of the box before laying it off to Wotherspoon who drilled a fine low strike into the bottom right corner of the net for his second of the evening.

Then 2 minutes later Saints made it four as Antell could not hold a Kane strike and Ballantyne reacted quickest to the loose ball as he tucked it beyond the Arbroath keeper. 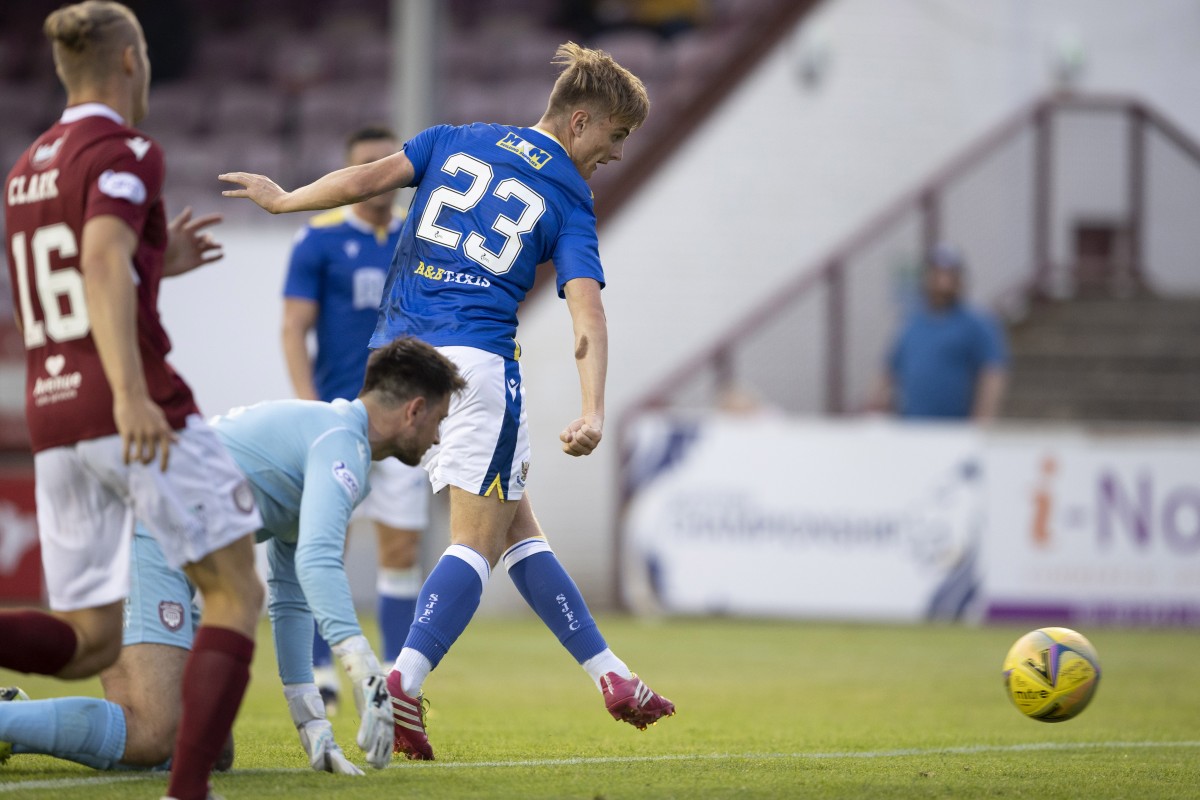 Saints made some more changes as Jordan Northcott, Sam Denham and John Spencer were all given some game time as they came on to replace Michael O’Halloran, Shaun Rooney and David Wotherspoon.

Arbroath though pulled a goal back late on as on-loan Livingston midfielder Harrison Clarke curled a great 25 yard effort beyond Parish.