Saints progressed to the quarter-finals of the Premier Sports Cup this afternoon as they defeated Arbroath 3-2 on penalties after the match had finished 2-2 after extra time.

Arbroath took the lead just after the half an hour mark as Joel Nouble tapped home a Nicky Low corner. Saints though were back on level terms on 59 minutes as Glenn Middleton reacted quickest to the loose ball after Jason Kerr’s penalty had been saved by Arbroath keeper Derek Gaston to send the match to extra time.

The hosts regained the lead in extra time when captain Thomas O’Brien volleyed high into the net. However, Saints came back again as Jamie McCart got on the end of a Liam Craig corner to plant a fine header past Gaston to take the match to penalties.

Zander Clark was brought on for the penalties and Saints would go on to win with Ali McCann netting the decisive penalty to book Saints spot in the quarter-finals.

Next up for Saints is a trip to Austria to take on LASK in the first leg of their UEFA Conference League play-off match on Thursday evening, kick off 6pm.

Saints started the defence of the League Cup this afternoon as they made the trip up the coast to take on Championship side Arbroath at Gayfield. Saints put in a battling performance on Thursday evening before eventually going down to Galatasaray in the UEFA Europa League Third Qualifying Round and Callum Davidson made six changes to his starting eleven for this afternoon’s Premier Sports Second round match. Elliott Parish, Shaun Rooney, Reece Devine, Glenn Middleton, Stevie May and Callum Hendry came in to replace Zander Clark, Liam Gordon, Callum Booth, Murray Davidson, Michael O’Halloran and Chris Kane. Arbroath drew 2-2 at Ayr United last weekend and manager Dick Campbell made one change to his team for today’s match as Liam Henderson dropped to the bench and he was replaced by James Craigen.

It was a pleasant afternoon on the Angus coast as Liam Craig got the match underway for Saints.

The first chance of the match was created by the hosts on 6 minutes as Scott Stewart saw his effort at goal deflected for a corner by Jamie McCart.

Then 3 minutes later Saints created their first chance of the match as Ali McCann sent a good ball down the right channel, playing in Glenn Middleton who then cut inside and weaved his way into the box before having a shot at goal which was turned behind for a corner.

Saints were attacking the Pleasureland end during the first half and on 20 minutes McCann saw his powerful 25 yard effort tipped over for a corner. Saints created another opportunity a couple of minutes later as McCart played in Reece Devine down the left and his cross into the box picked out Middleton whose effort at goal was blocked. Saints continued the pressure and the ball eventually broke to Craig who curled over.

The breakthrough came on 31 minutes and it came for the hosts. Nicky Low swung in a corner from the right which wasn’t dealt with by the Saints defence as Ricky little flicked the ball on and Joel Nouble tapped home at the back post to give the Championship side the lead.

Saints created a good opportunity to get back into the match on 38 minutes as James Brown’s cross from the right broke to Devine but the shot from the on-loan Manchester United defender was saved by Derek Gaston. Then a minute later Saints got another sight of goal however, Callum Hendry’s half volley was straight at Gaston.

Saints continued the pressure and with the match approaching half time Rooney sent a good ball forward, playing in Middleton down the right who then picked out Stevie May but the header from the forward didn’t trouble Gaston.

Saints finished the first half the stronger of the two sides and Rooney was next to try and get Saints back on level terms but he was unable to get his effort on target on 41 minutes. Then 2 minutes later McCann linked up well with Middleton who unleashed a strike at goal but Gaston was equal to his effort.

PHOTO: Ali McCann's shot is tipped over the bar by Derek Gaston

Before the second half got underway Arbroath made a change as David Gold replaced Harrison Clark.

Arbroath started the second half strongly and on 53 minutes Elliott Parish was called into action, saving a Colin Hamilton’s half volley from 20 yards. Then 2 minutes later Low saw his strike turned behind for a corner by Brown.

Dick Campbell’s side were looking the likelier to extend their lead however on 58 minutes Saints were given an opportunity to get back into the match after they were awarded a penalty after Devine was hauled down by Gaston. Jason Kerr stepped up to take the penalty but his spot kick was saved by Gaston’s trailing leg. However, Middleton reacted quickest to the loose ball as he slid in to knock the ball home to level the match for Saints. 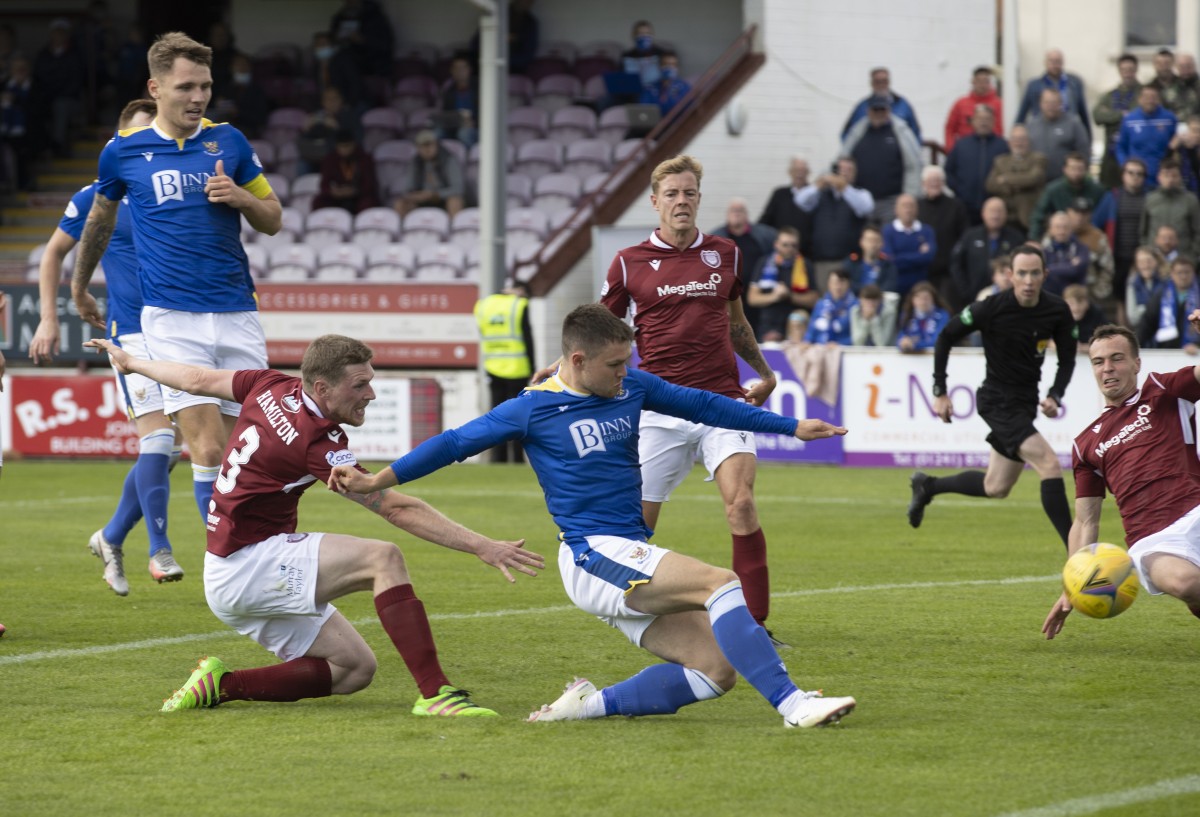 That goal sparked Saints into life and on 63 minutes a good move by the cup holders saw Brown play a neat one-two with McCann but the defender was blocked off just as he about to pull the trigger. The ball then broke to Craig but his effort from distance went high over the bar.

Saints then made their first change of the game as Cammy Ballantyne replaced Stevie May. That was followed by another change shortly after as Reece Devine made way for Callum Booth.

Middleton came agonisingly close to giving Saints the lead on 83 minutes as he latched onto a Rooney through ball before unleashing a strike that hit the underside of the crossbar and bounced down before being gathered by Gaston. Saints were claiming the ball had crossed the line but referee Colin Steven waved away the appeals. That proved to be Middleton’s last involvement in the match as he was then replaced by Michael O’Halloran.

With 4 minutes of the ninety remaining Nouble headed the ball down to Michael McKenna however, the midfielder was unable to test Parish as he fired over. The hosts just about won it deep into the 5 minutes of stoppage time but Thomas O’Brien was denied by an excellent McCart block.

With both sides level at full time the match went to extra time. Arbroath started the first half of extra time brightly and in the first minute a long ball forward bounced over the Saints defence and played in Luke Donnelly but Parish made a good save palming away the substitutes effort from 15 yards.

Then 2 minutes later the hosts regained the lead as a Bobby Linn corner from the left was knocked back across goal by Little and The Red Lichties captain O’Brien got on the end of it to volley the ball high into the net from six yards.

Saints though were back on level terms on 105 minutes as a Craig corner from the left was met by McCart who got up well to plant a fine header past Gaston and into the net. 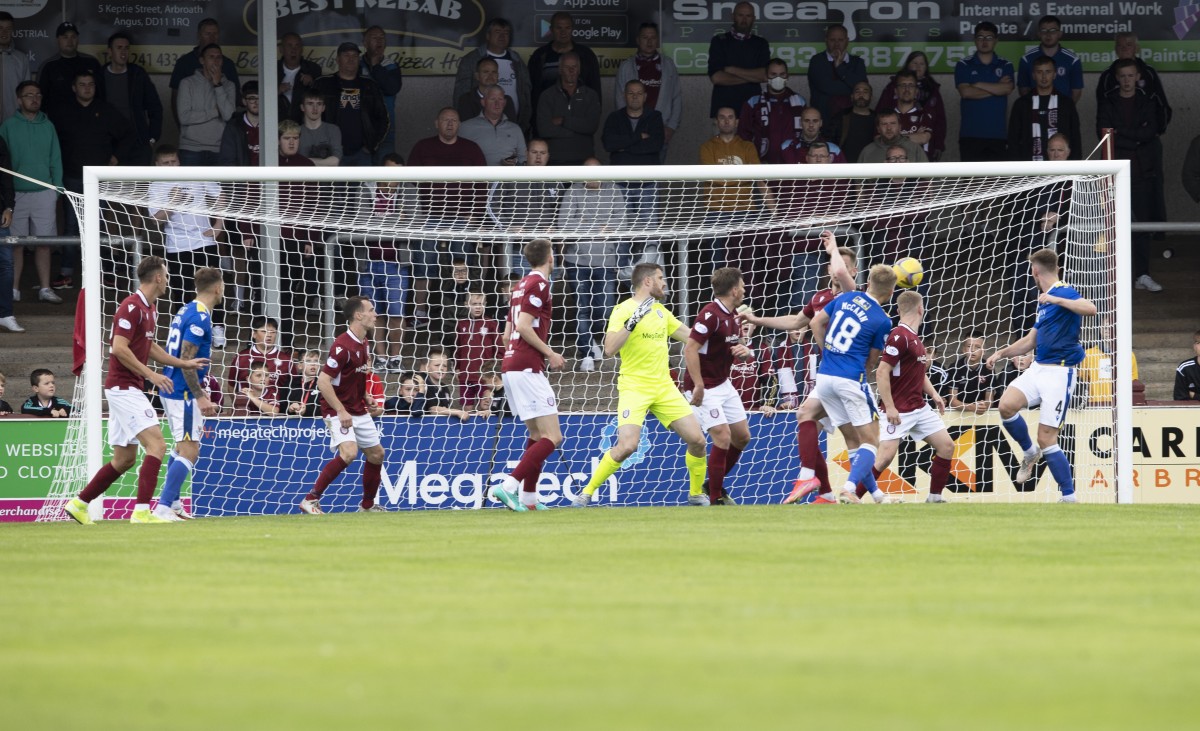 PHOTO: Jamie McCart heads the ball into the net to make it 2-2

Saints made a change before the second period of extra time could start as Murray Davidson replaced James Brown.

Saints were now pressing for a winner and on 112 minutes a good move by Saints saw Ballantyne break down the left before sending over a cross that was deflected behind for a corner. Then 4 minutes later the visiting support thought Ballantyne had completed a good comeback from Saints however, the midfielder’s strike from 30 yards went inches wide of Gaston’s left hand post.

With the match heading towards penalties Saints made another change as Zander Clark came on to replace Elliott Parish.

The penalties were taken in front of the Arbroath fans at the Pleasureland end of Gayfield and after Ricky Little hit the bar for the hosts first penalty, Saints took an early lead as Liam Craig calmly despatched his spot kick low to the left. Liam Henderson and Callum Hendry both scored their penalties and then Dale Hilson blasted his over. Callum Booth was up next for Saints however, his penalty was saved as Gaston got down well to his right to get a strong hand to it and then Nicky Low levelled the shootout despite Clark getting a hand to the midfielder’s penalty. Saints fourth penalty was taken by Jason Kerr but the Saints captain put his effort wide of Gaston’s right-hand post. The shootout was now tied at 2-2 and Arbroath’s final penalty was taken by Bobby Linn but his spot kick crashed off Clark’s left-hand post and Ali McCann stepped up knowing he could win it for Saints and he despatched the ball past Gaston to book Saints spot in the quarter-final draw. 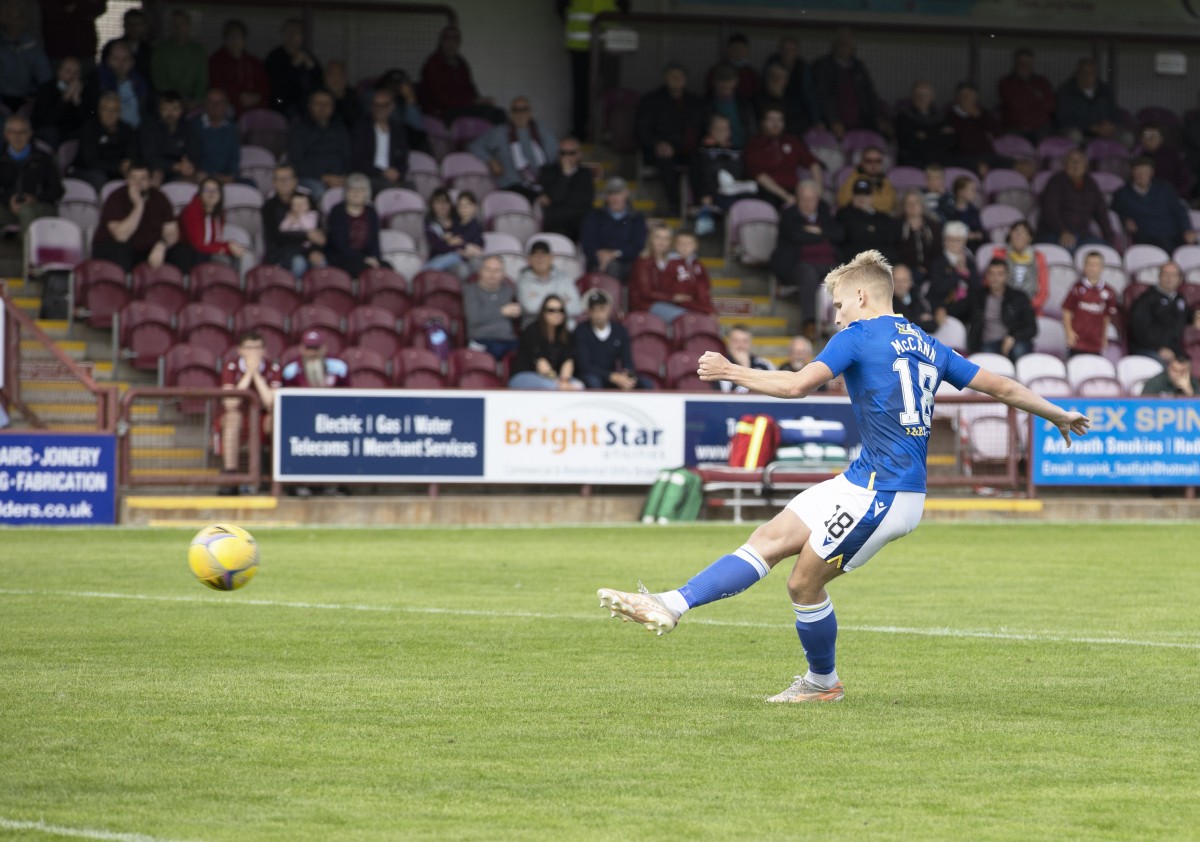