Saints put in a battling performance this evening as their defence of the Premier Sports Cup came to an end at Hampden Park as they narrowly lost to Celtic.

The match was a tight affair and the only goal of the game came on 73 minutes. Celtic substitute James Forrest got on the end of a loose ball in the box to guide it home from close range after Jota’s cross had been cut out by Jamie McCart.

Saints battled right to the end however, Celtic were able to see the game out to secure their passage to the Premier Sports Cup Final.

Next up for Saints is a home game against Hibs next Saturday, kick off 3pm.

With the international break over Saints returned to action this evening as they took on Celtic in the semi-finals of the Premier Sports Cup. Before the international break Saints drew 0-0 with St Mirren at McDiarmid Park and Callum Davidson made three changes to his starting eleven for this evening’s semi-final. Hayden Muller, Ali Crawford and Glenn Middleton dropped out to be replaced by James Brown, Shaun Rooney and David Wotherspoon. Celtic won 4-2 at Dundee a fortnight ago and manager Ange Postecoglou decide to go with the same team which started in the City of Discovery for this evening’s cup match.

Before the match got underway there was a minute’s applause for Bertie Auld who sadly passed away last weekend.

Murray Davidson got the match underway for Saints but it was Celtic who created the first chance of the match after 2 minutes as Jota cut inside from the left before curling an effort wide. Then a couple of minutes later a quick Celtic break saw Jota advance down the left before picking out David Turnbull in the centre but the midfielder put his effort over from 12 yards.

The first booking of the game came on 14 minutes as Nir Bitton found his way into referee Nick Walsh’s book for a foul on Chris Kane.

Saints came within inches to taking the lead on 19 minutes as Stephen Welsh played a pass back to Joe Hart but Michael O’Halloran showed great determination to close down Hart as his deflected block went narrowly wide of the keeper’s right hand post.

3 minutes later a Turnbull corner from the right was met by Cameron Carter-Vickers but the on-loan Tottenham Hotspur defender put his header wide of the target.

Just before the half an hour mark Saints got another sight of goal as David Wotherspoon setup Craig Bryson however, the effort from the Saints midfielder didn’t trouble Hart. Then on 33 minutes Hart was called into action as Rooney played the ball back to Bryson and the midfielder hit a low effort from 25 yards which the Celtic keeper gathered at the second attempt.

On 37 minutes Kyogo Furuhashi’s delivery from the right picked out Liel Abada however, the strike from the Israeli forward was blocked by Bryson as he turned it behind for a corner.

Both sides continued to create chances and on 42 minutes Wotherspoon again turned provider, this time setting up Chris Kane whose snap shot went wide with Hart at full stretch.

Then just before half time Liam Gordon made a fine block to deny Callum MacGregor as the first half finished goalless.

On 52 minutes Saints were forced into a change as Ali Crawford came on to replace David Wotherspoon, who injured his knee in a challenge with Anthony Ralston.

Celtic were dominating possession during the second half however, they struggled to find a way past a well organised Saints defence.

Celtic made their first change of the game on 69 minutes as James Forrest was introduced in to the action, replacing Liel Abada and it didn’t take the Scotland Internationalist long to make an impact on the match.

On 73 minutes Bryson played a neat ball to Crawford and the on-loan Bolton Wanderers midfielder decide to try and lob Hart from 40 yards however, his attempt drifted wide of the target. 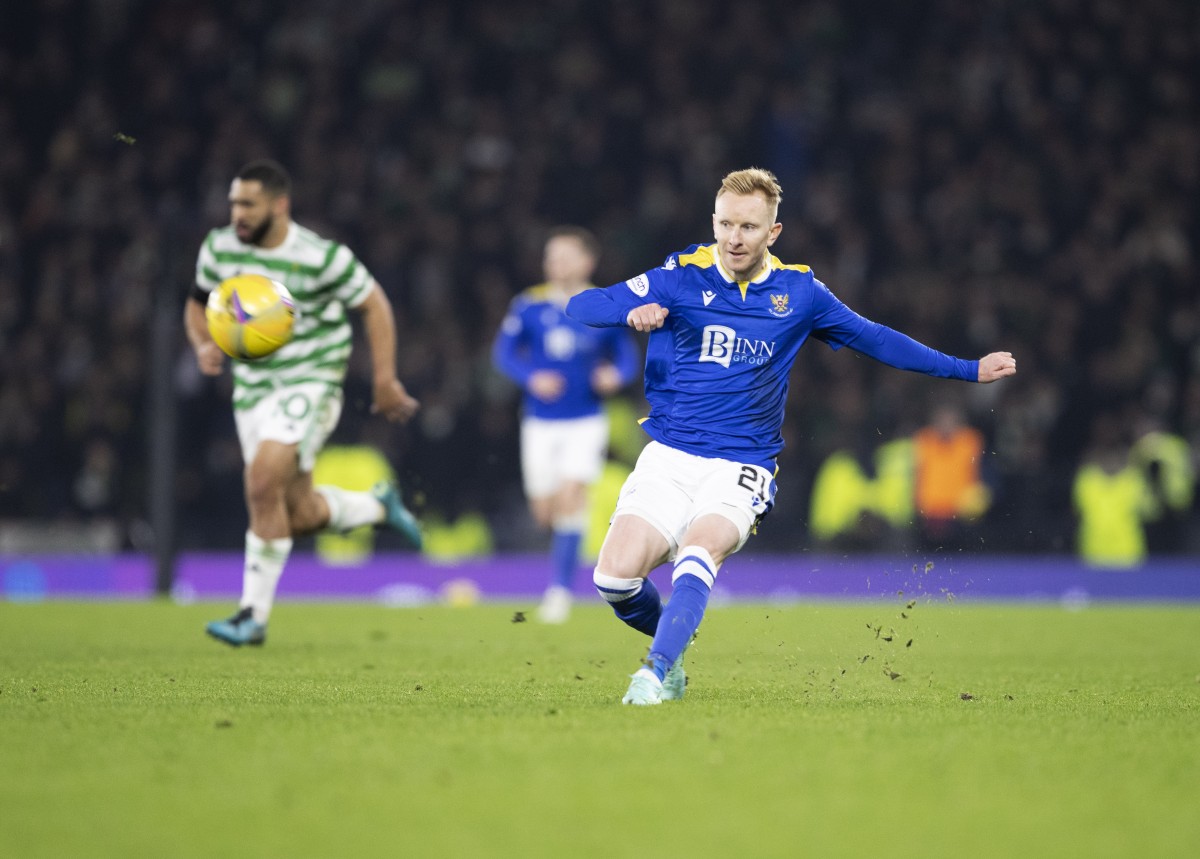 Play then quickly switched to the other end as Celtic took the lead. Jota’s cross into the box to Furuhashi was cut out by Jamie McCart however, the loose ball broke to Forrest and the substitute fired home from close range.

Saints responded well to going a goal down and on 86 minutes substitute Eetu Vertainen saw his shot on the turn from 18 yards saved by Hart.

With Saints pushing forward for an equaliser it opened up space for Celtic at the back and 3 minutes later Jota got another sight of goal as the Portuguese midfielder saw his strike turned behind for a corner by Liam Gordon. Then in stoppage time a strike from substitute Mikey Johnston was saved by Clark. 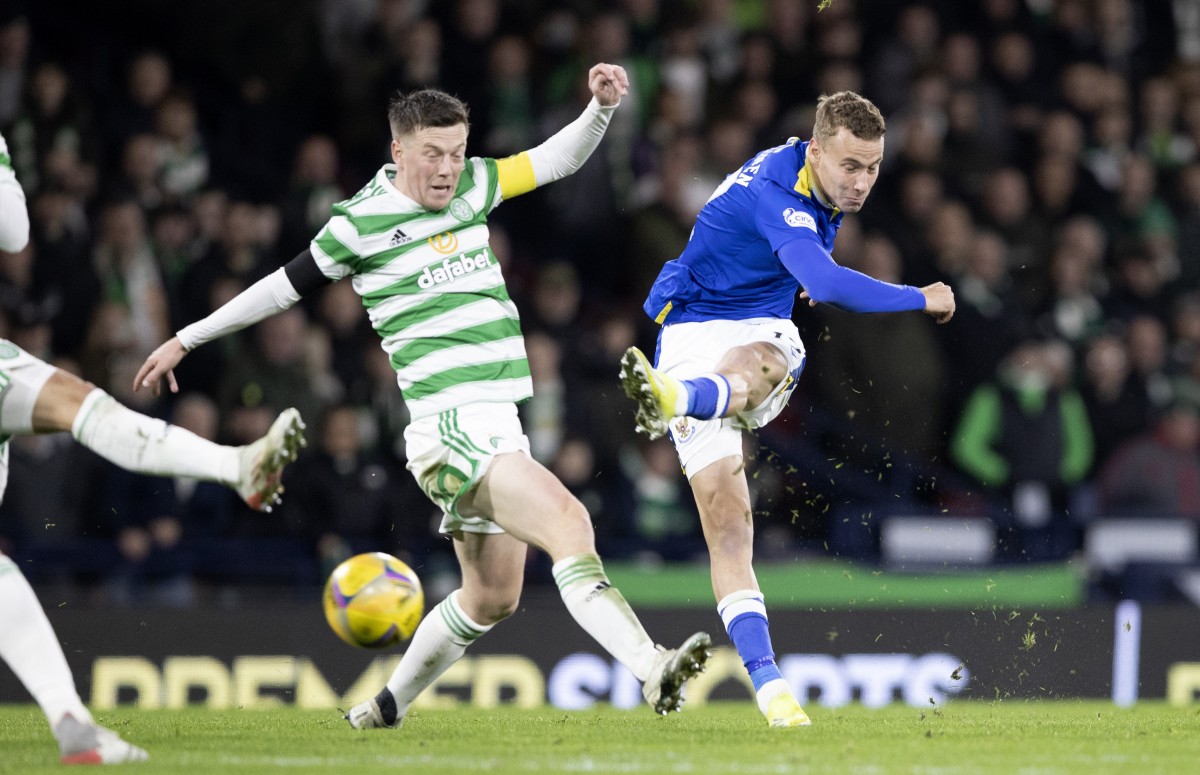 Saints pressed right to the death and O’Halloran almost rob Hart again with his quick closing down but Celtic were able to repel the late pressure from Saints to secure their spot in the final of the Premier Sports Cup.