Despite an improved performance Saints were defeated 2-0 by Celtic in Glasgow this afternoon.

Saints made a positive start to the match however, the hosts took the lead on 34 minutes as Giorgos Giakoumakis volleyed home an Anthony Ralston cross after Callum Booth had misjudged the flight of a deflected Josip Juranović ball.

Saints continued to battle away but Celtic secure the points in the second half after they were awarded a penalty after Liam Gordon brought down Kyogo Furuhashi just inside the box. Josip Juranović made no mistake from the spot as he sent Zander Clark the wrong way.

Saints are back in action on Wednesday evening as they welcome Hearts to McDiarmid Park, kick off 7:45pm.

The east end of Glasgow was the destination for Saints this afternoon as they looked to bounce back from last Saturday’s 3-0 defeat at home to Livingston. There were four changes to the Saints starting eleven this afternoon as James Brown, Liam Gordon, Craig Bryson and Glenn Middleton came in to replace Michael O’Halloran, Shaun Rooney, Liam Craig and Stevie May. Celtic defeated Ferencváros 2-0 in the UEFA Europa League on Tuesday afternoon and manager Ange Postecoglou made two changes to his team for this afternoon’s league game as Adam Montgomery and Liel Abada both dropped to the bench and they were replaced by Giorgos Giakoumakis and Josip Juranović.

Before Tom Rogic got the match underway both sides showed their support for the Show Racism the Red Card Campaign. Saints made a positive start to the match as on 4 minutes they were awarded a free kick out wide on the right after James Brown had been fouled by Joao Neves Filipe Jota. Cammy MacPherson took the free kick and his right footed delivery broke to Callum Booth who setup up David Wotherspoon but the strike from the Canadian internationalist was deflected behind for a corner.

Celtic got their first clear sight of goal after 11 minutes as Jota played a short corner to David Turnbull and the midfielder carried the ball to the edge of the Saints box before setting up Callum McGregor but Zander Clark made a good save with this right foot to deny the Celtic captain.

After an end to end start to the match Celtic started to control possession and on 24 minutes Jota unleashed a dipping strike from distance which didn’t trouble Clark. 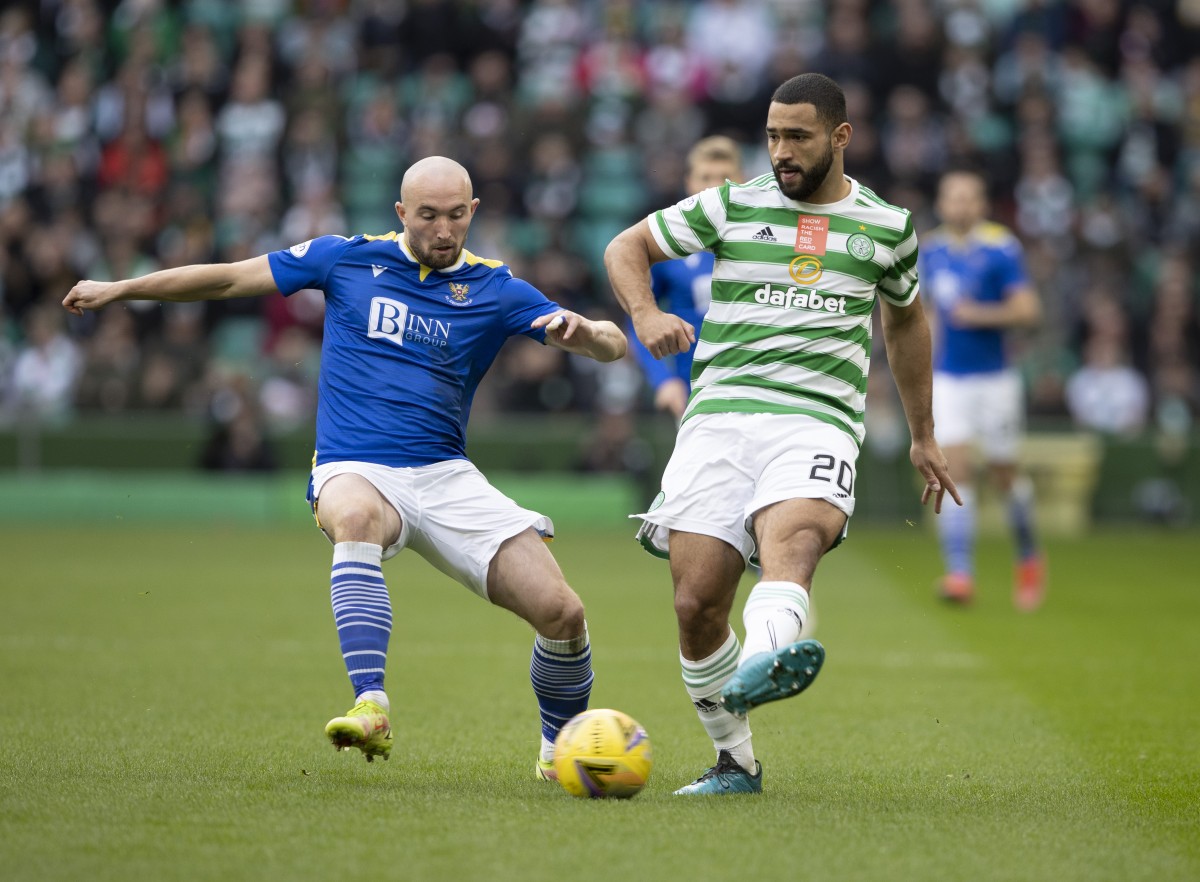 Then shortly after a good move by Saints saw Booth and Wotherspoon link up well as the latter broke into the Celtic box however, he was crowded out by the home defence before he could get his strike away.

The first booking of the game came just before the half an hour mark as MacPherson was booked for a halting Jota in his tracks as The Bhoys tried to hit Saints on the break.

The breakthrough for the hosts came with 11 minutes of the first half remaining. Persistent play by Anthony Ralston saw the defender chase down a deflected looping ball from Josip Juranović, which Callum Booth misjudged, and the former Saints player gathered the ball at the byline before sending over a good cross into the centre of the box and Giorgos Giakoumakis volleyed home from close range. 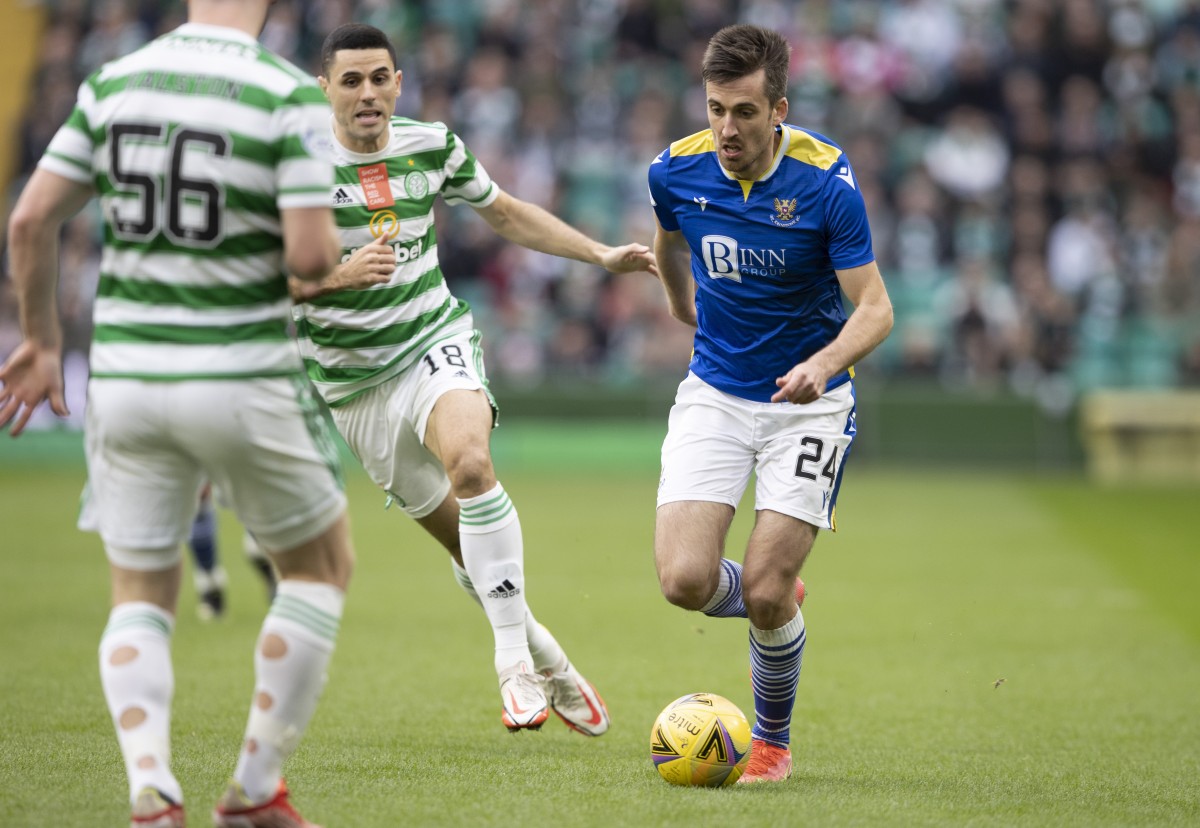 PHOTO: Callum Booth is closed down by Anthony Ralston and Tom Rogic

2 minutes into the second half a MacPherson corner from the right was met by Jamie McCart at the back post however, the defender couldn’t direct his header on target. Then shortly after MacPherson got a sight of goal however, his effort from the edge of the box didn’t trouble Joe Hart.

Celtic quickly reasserted their dominance and they created their first chance of the half on 57 minutes as McGregor’s’ deflected effort had Clark scrambling across his goal as it went inches wide.

Saints then made their first change on 63 minutes as Ali Crawford came on to replace Glenn Middleton.

However, a minute later a quick Celtic break saw Turnbull play in Rogic but the Australian midfielder wasn’t able to direct his strike on target.

A second change for Saints then followed on 70 minutes as Stevie May came on to replace David Wotherspoon as Callum Davidson changed the formation to 4-4-2 for the last 20 minutes.

Celtic continued to press for a second and 5 minutes later Crawford made a great sliding lock to deny Jota.

The match then started to get a bit heated with some hefty challenges going in which had referee Nick Walsh busy with several players going into his book. 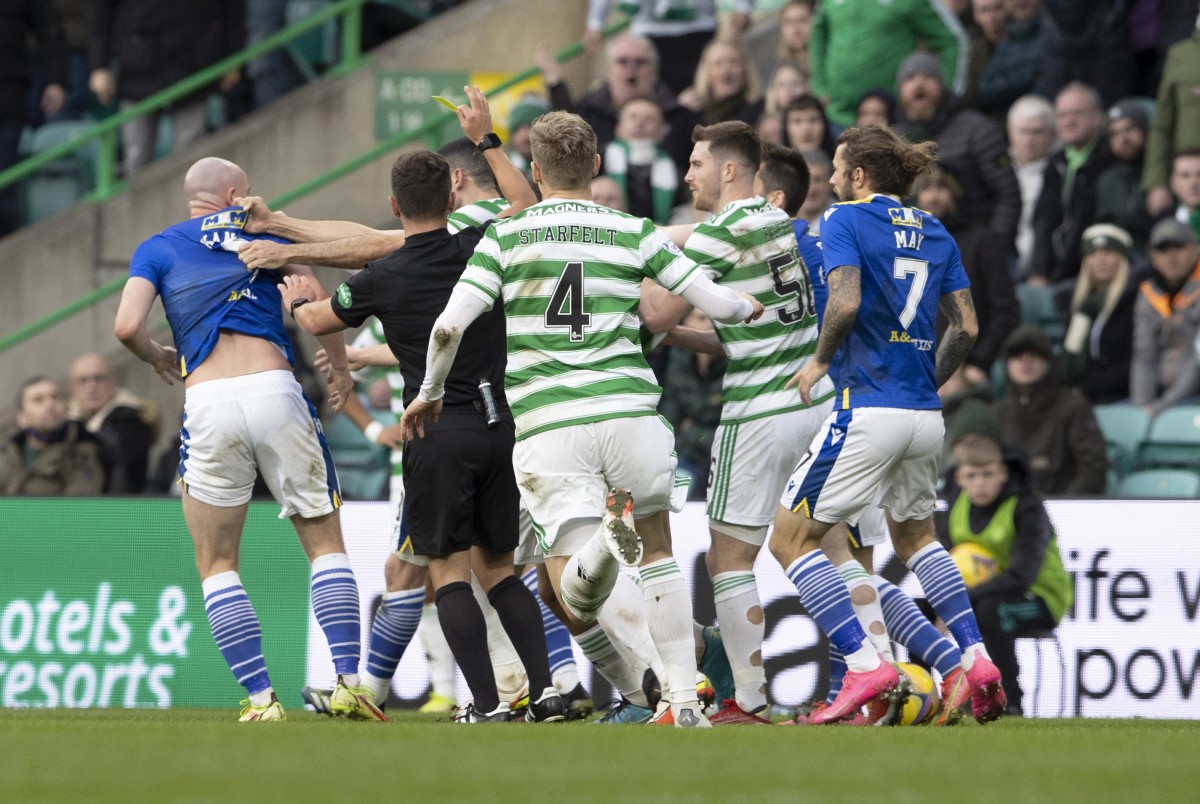 PHOTO: Chris Kane gets into a tussle with Cameron Carter-Vickers

With 10 minutes remaining the hosts were awarded a penalty after Liam Gordon was deemed to have brought down Kyogo Furuhashi just inside the box after the Japanese midfielder had linked up well with Jota in a swift Celtic attack. Juranović stepped up to take the penalty and the Croatian coolly sent Clark the wrong way as he slotted the ball in the bottom right corner of the net.

The Bhoys continued to create chances in the closing stages and Clark made a great save on 82 minutes to deny Celtic substitute Michael Johnston and then 3 minutes later a Turnbull corner from the left was met by Cameron Carter-Vickers but the on-loan Tottenham Hotspur defender put his header wide.

On 85 minutes Saints made another change as Chris Kane was replaced by Eetu Vertainen.

The Parkhead side continued to push to further extend their lead and on 88 minutes Johnston’s curling effort hit the post with Clark rooted to the spot. Then deep into the 4 minutes of additional time McGregor saw his powerful effort palmed away by Clark.

Picture: David Wotherspoon gets away from Kyogo Furuhashi