Celtic scored a quick-fire double as they defeated Saints 4-0 at Celtic Park this evening.

The Hoops opened the scoring on 23 minutes as Ryan Christie played an indirect free kick to David Turnbull who sent a low shot past Zdeněk Zlámal. Odsonne Édouard then doubled Celtic’s advantage a minute later.

Craig Conway came close to pulling a goal back for Saints in the second half however, his effort was cleared off the line by Adam Montgomery.

Celtic continued to have the lion’s share of the possession and they got a third goal with 11 minutes remaining courtesy of a deflected Kristoffer Ajer strike. Karamoko Dembélé then scored Celtic’s fourth goal on 86 minutes with a neat finish from a tight angle.

Despite tonight’s result, Saints will go into their final league game of the season with Livingston on Saturday knowing that if they avoid defeat to the West Lothian side that they will finish fifth in the Scottish Premiership and qualify for Europe. Kick off for Saturday’s game at McDiarmid Park is 12:30pm.

For their penultimate league game of the season Saints made the trip to Celtic Park this evening to take on Celtic. Following Sunday’s 2-1 win against St Mirren which saw Saints progress to the Scottish Cup final manager Callum Davidson made five changes to his starting line-up for this evening’s game. Zdeněk Zlámal, James Brown, Charlie Gilmour, Craig Conway and Glenn Middleton came into replace Zander Clark, Liam Gordon, Ali McCann, David Wotherspoon and Guy Melamed. Celtic lost 4-1 at Rangers in their last game ten days ago and caretaker manager John Kennedy made three changes to his starting eleven this evening. Scott Bain, Greg Taylor and Callum McGregor dropped out to be replaced by Vasilis Barkas, Ryan Christie and Adam Montgomery.

It was a sunny evening in the east end of Glasgow as Craig Bryson got the match underway for Saints. It was a positive start by the Perth side and on 6 minutes Glenn Middleton saw his effort at goal blocked by a Celtic defender and then shortly after Middleton sent an inviting cross into the box from the right which was met by James Brown but he glanced his header wide.

Despite the positive start to the match Saints would find themselves behind as Celtic netted twice within a minute. Firstly, on 22 minutes the Hoops were awarded an indirect free kick just inside the box after Zdeněk Zlámal was deemed to have picked up a pass back. Ryan Christie played the free kick short to David Turnbull who sent a low ball past Zlámal to give the hosts the lead. Then barely a minute later Celtic doubled their lead as captain Scott Brown, who was playing his final home game for Celtic this evening, played a long ball forward to Odsonne Édouard who took one touch to take the ball around Shaun Rooney before slotting it into the net.

Despite that double whammy Saints almost pulled a goal back on 29 minutes as a misguided header from Stephen Welsh was straight to Chris Kane who tried chip the ball over Vasilis Barkas but the Greek keeper was able to get a touch to the ball before gathering it at the second attempt. 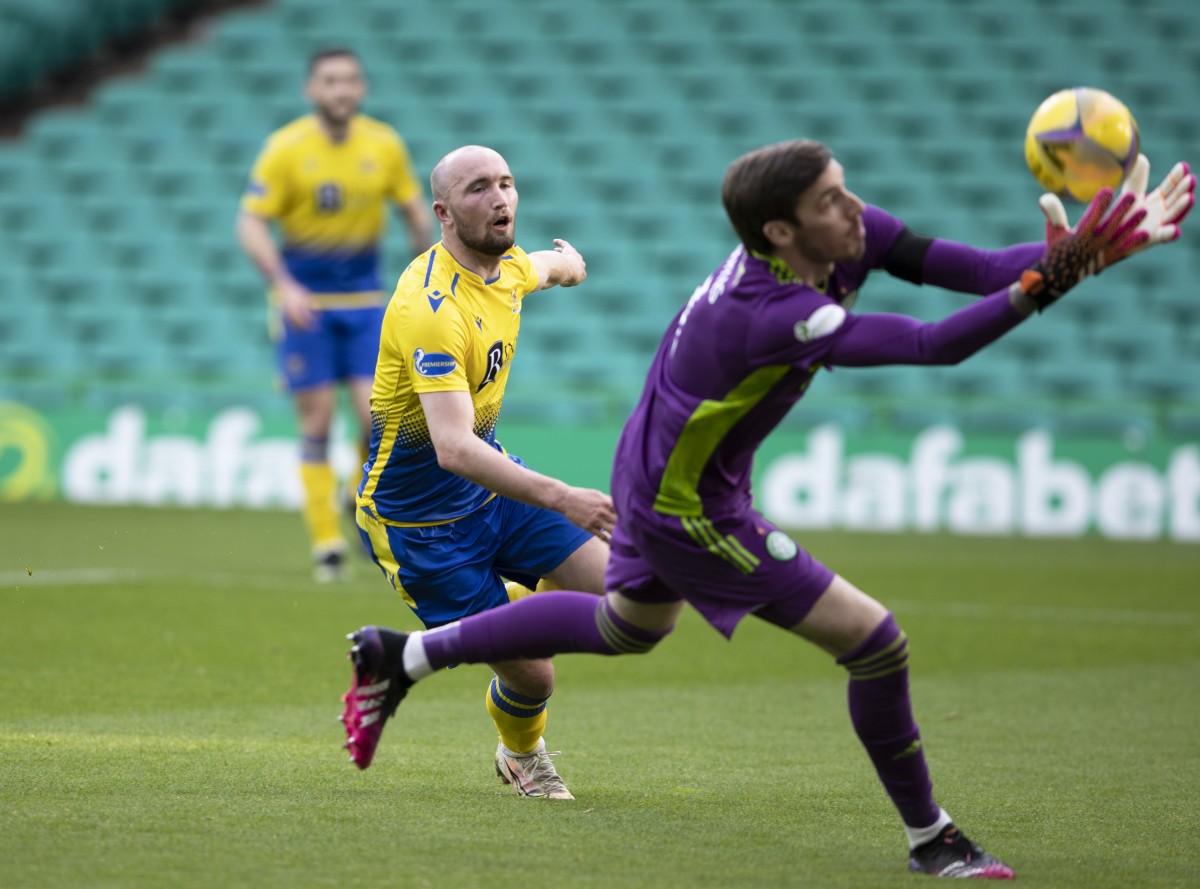 With 5 minutes of the first half remaining Celtic came close to a third goal. Christie broke into the Saints box but Rooney made an excellent last ditch block to deny the midfielder.

Celtic were out the traps early in the second half as they created opportunities to extend their lead. On 47 minutes Forrest sent an inviting ball into the Saints box which was cut out for a corner. Then shortly after Christie fed the ball to Jonjoe Kenny but the on-loan Everton defender couldn’t get his effort on target.

The early pressure on the Saints goal continued and on 51 minutes Brown played a neat pass to Christie but Zlámal made a great save with his feet to block the strike from the Scotland internationalist. Play continued as Celtic quickly regained possession with Édouard having a shot at goal saved by Zlámal.

Saints thought started to come back into the match and on 57 minutes Craig Conway almost pulled a goal back for Saints however, his strike was cleared off the line by Adam Montgomery.

Then a minute later Kane won Saints a free kick after he had been fouled by Christie. Middleton stood over the free kick however, he couldn’t replicate his fine strike from Sunday as he sent his effort high into the stand behind the goal.

On 64 minutes Zlámal made a great double save to first deny Édouard and then the ball broke to Mohamed Elyounoussi but the on-loan Hearts keeper made another fine save.

Celtic continued to create opportunities and on 72 minutes substitute Greg Taylor played a good pass to Forrest but he put his effort over. Then 2 minutes later Zlámal was called into action again, this time tipping over a Taylor strike.

Saints made their first change of the game on 75 minutes as David Wotherspoon replaced Craig Conway.

The flow towards the Saints goal continued and on 78 minutes substitute Leigh Griffiths saw his header turned behind for a corner by Zlámal. The Celtic pressure eventually told a minute later as a deflected strike from Kristoffer Ajer looped over Zlámal and into the net for Celtic’s third of the evening.

A double change was then made by Saints as Alex Ferguson and Guy Melamed came onto replace Charlie Gilmour and Glenn Middleton. 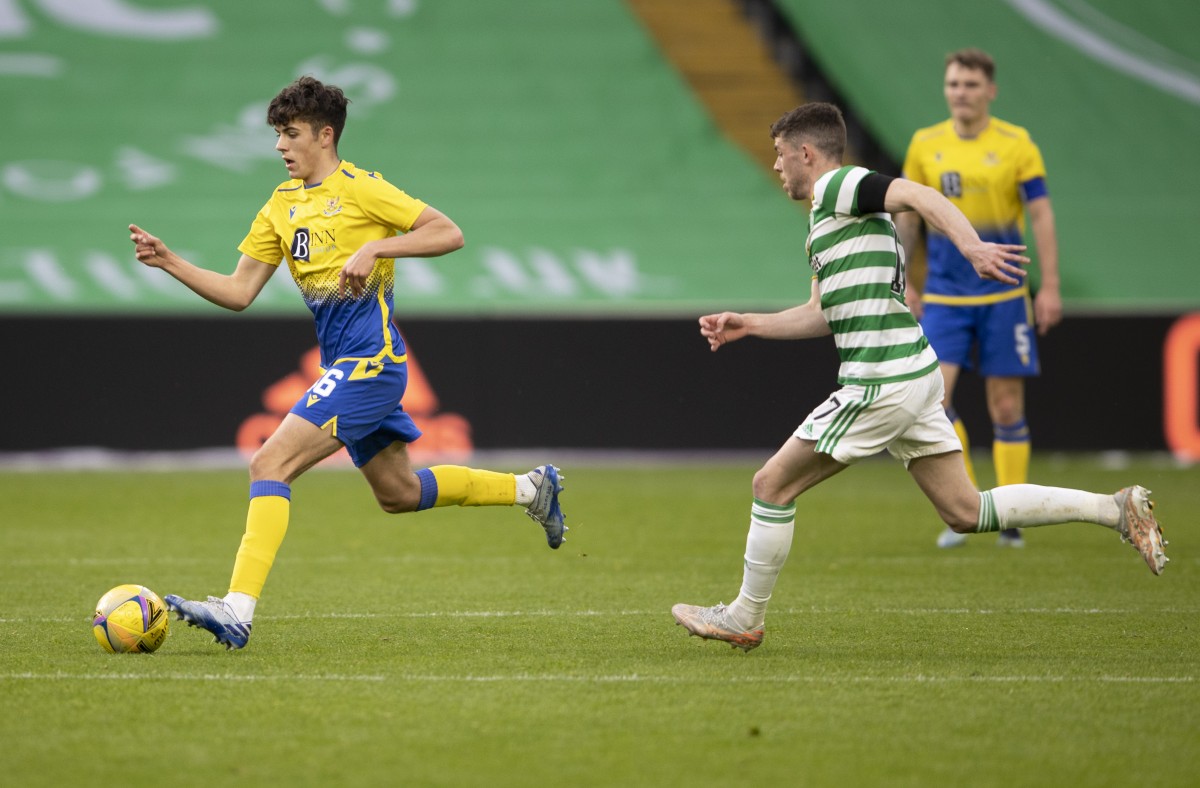 PHOTO: Substitute Alex Ferguson is closed down by Ryan Christie

However, with 4 minutes remaining Celtic got a fourth goal. Turnbull sent Karamoko Dembélé free down the right and he broke into the Saints box before slotting the ball low past Zlámal and into the far corner of the net.

Picture: Charlie Gilmour in action, the young midfielder made his first start for Saints this evening