It was an afternoon to forget for Saints today as they suffered a 7-0 defeat to league leaders Celtic in the east end of Glasgow.

Giorgos Giakoumakis then got Celtic’s second goal after he had intercepted a slack back pass by Callum Booth before Daizen Maeda headed home to give the hosts a 3-0 half time lead.

The Hoops continued the one-way traffic on the Saints goal in the second half and Josip Juranović scored from the penalty spot on 51 minutes after Hatate had been fouled by Tom Sang.

Substitute Matt O’Riley then scored twice in three minutes to make it 6-0 to Celtic before fellow substitute Liel Abada rounded off the scoring as he got the host’s seventh goal of the afternoon with 12 minutes remaining.

Saints headed to Glasgow today to take on Celtic for their final league game before the split. An early Callum Hendry penalty saw Saints defeat Livingston 1-0 last weekend and Callum Davidson made three changes to his starting line-up for this afternoon’s match. James Brown, Callum Booth and Glenn Middleton came in to replace Dan Cleary, Tony Gallacher and Nadir Çiftçi. Celtic came from behind to defeat Rangers 2-1 last Sunday and manager Ange Postecoglou decided to go with the same team which started at Ibrox.

It was a sunny afternoon in the east end of Glasgow as Melker Hallberg got the match underway. Despite being under early pressure from the hosts Saints created a chance on 4 minutes as Shaun Rooney picked out Hallberg who created space for himself on the edge of the box but his left footed strike didn’t trouble Joe Hart.

Play then quickly switched to the other end as on 7 minutes Josip Juranović played in Reo Hatate but Zander Clark made a great save to deny the Japanese midfielder. Hatate though wasn’t to be denied a minute later as he gave the hosts the lead. James Brown failed to clear the ball and Hatate latched onto it as he lashed a low strike from 18 yards across Clark and into the bottom corner. 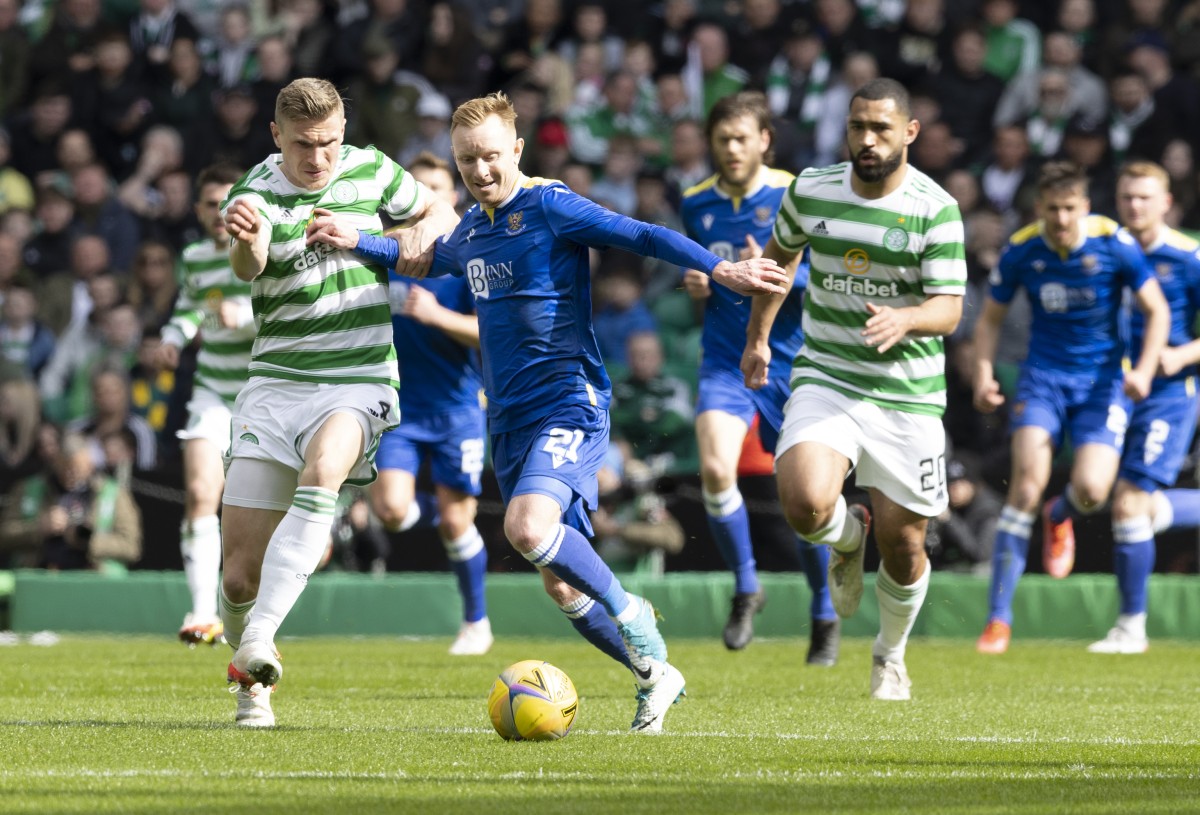 The Japanese midfielder then almost got his and Celtic’s second of the game on 10 minutes but Clark made another great save as he turned the ball behind for a corner. Jota took the corner from the left and his delivery picked out Giorgos Giakoumakis but the header from the Greek forward didn’t trouble Clark.

The Hoops were dominating the possession and on 13 minutes Tom Rogic danced his way through the Saints defence but Clark made a good save with his feet to deny the midfielder. Play continued and Jota picked up the loose ball before curling a shot wide of the top left corner.

After weathering the pressure from the hosts Saints looked to hit the league leaders on the break on 21 minutes as Ali Crawford played in Middleton but his cross into the box was cut out by Carl Starfelt. 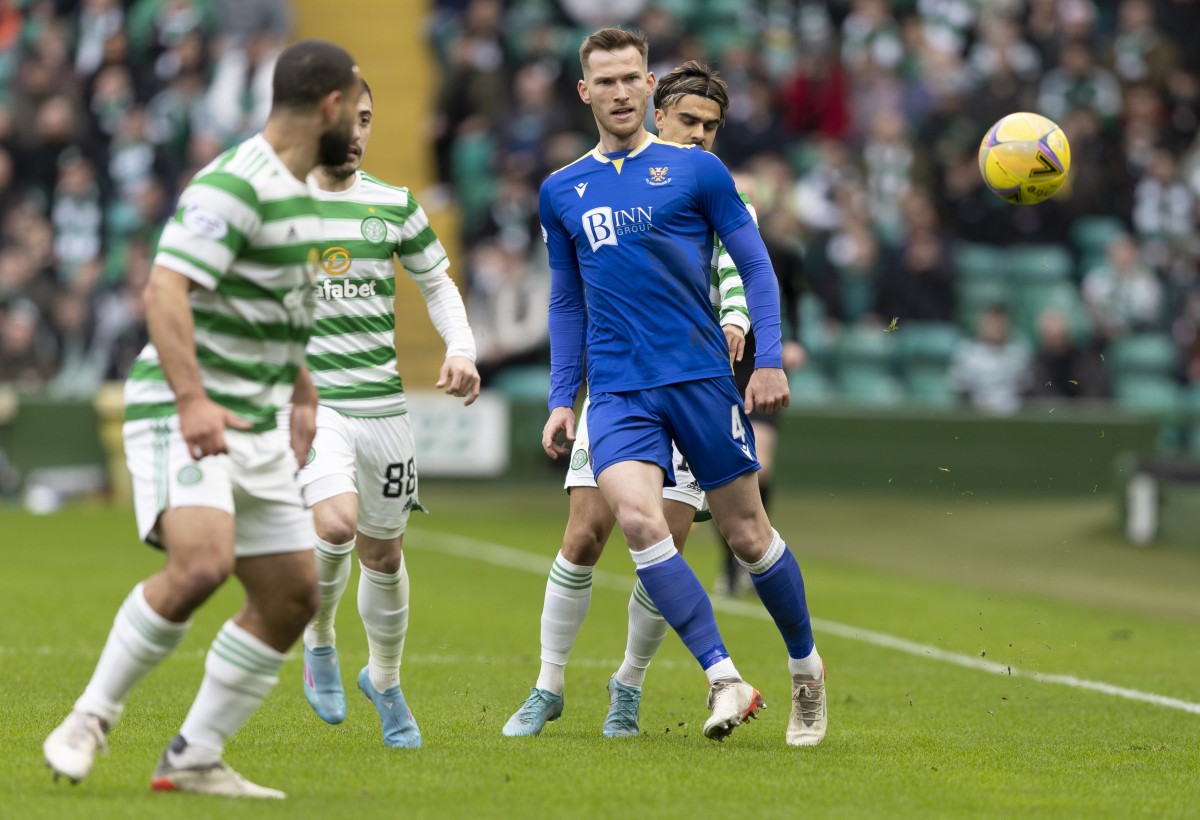 PHOTO: Jamie McCart is closed down

Celtic’s domination was reward a minute later as they doubled their lead. Under pressure from Daizen Maeda Callum Booth played the ball back to Clark however, his back pass was short as it was intercepted by Giakoumakis who rounded Clark and knocked the ball home from a tight angle.

The one-way traffic towards the Saints goal continued as Jota fired narrowly wide just after the half an hour mark. Then with 9 minutes of the first half remaining Celtic got a third as Jota’s cross was perfect for Maeda who headed home from close range.

Both sides made changes at half time as Saints made a double change with Cammy MacPherson and Tom Sang coming on to replace Murray Davidson and Shaun Rooney. Whilst Celtic brought on Matt O’Riley to replace Tom Rogic.

6 minutes into the second half The Bhoys were given the chance to make it 4-0 after they were awarded a penalty following a foul on Hatate by Sang just inside the box. Juranović stepped up to take the penalty and despite guessing the correct way Clark was unable to keep it out the Croatian’s effort as he tucked it into the bottom left hand corner of the net. 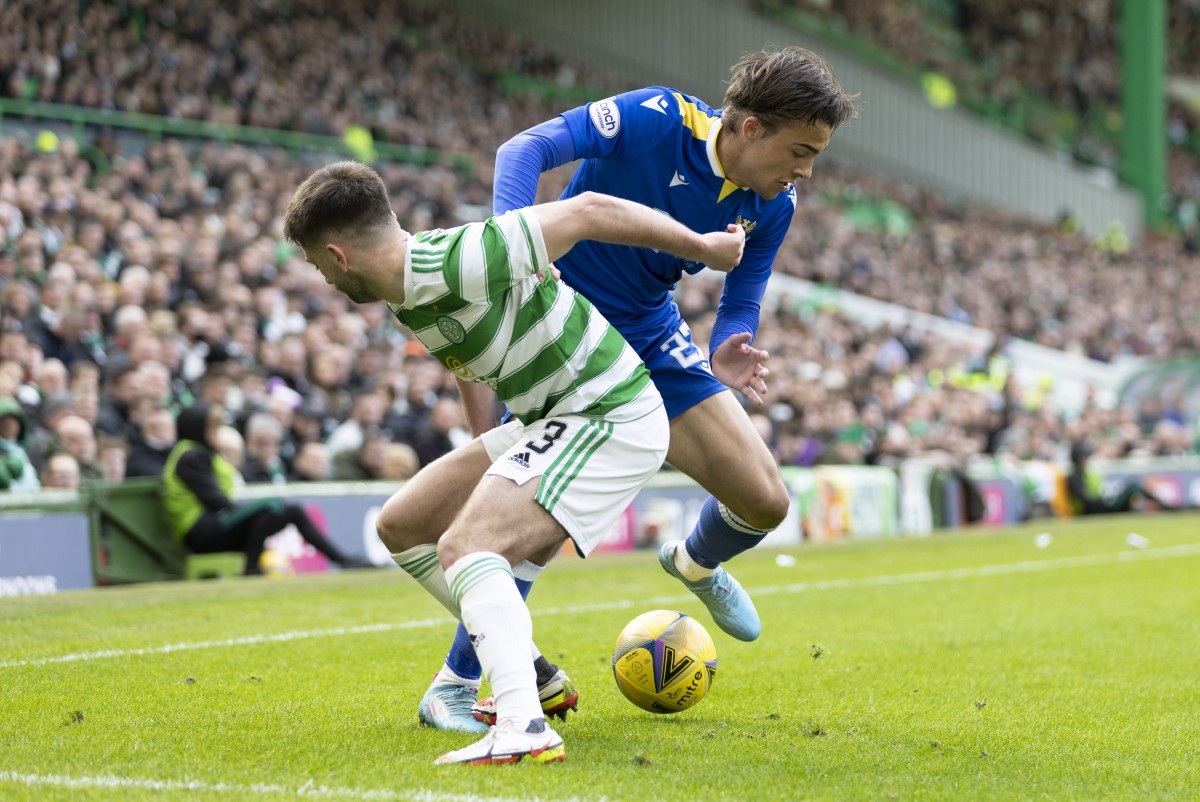 PHOTO: Tom Sang and Greg Taylor battle for the ball

On 58 minutes a ball which was played deep into the Saints box was cut back by Greg Taylor to Liel Abada but he couldn’t direct his effort on target.

The home support then thought Juranović had got a fifth for the Parkhead side as his free kick a couple of minutes later went inches wide of Clark’s left hand post.

On 64 minutes Saints made a double change as Theo Bair and Stevie May came on to replace Callum Hendry and Glenn Middleton.

The pressure on the Saints goal continued and on 68 minutes O’Riley saw his strike hit the side netting. However, the Danish under 21 internationalist wasn’t to be denied with 20 minutes remaining as he got on the end of a David Turnbull cross to plant a powerful header beyond Clark.

The midfielder then got his second and Celtic’s sixth of the game 3 minutes later as he curled a strike into the top corner from the edge of the box. 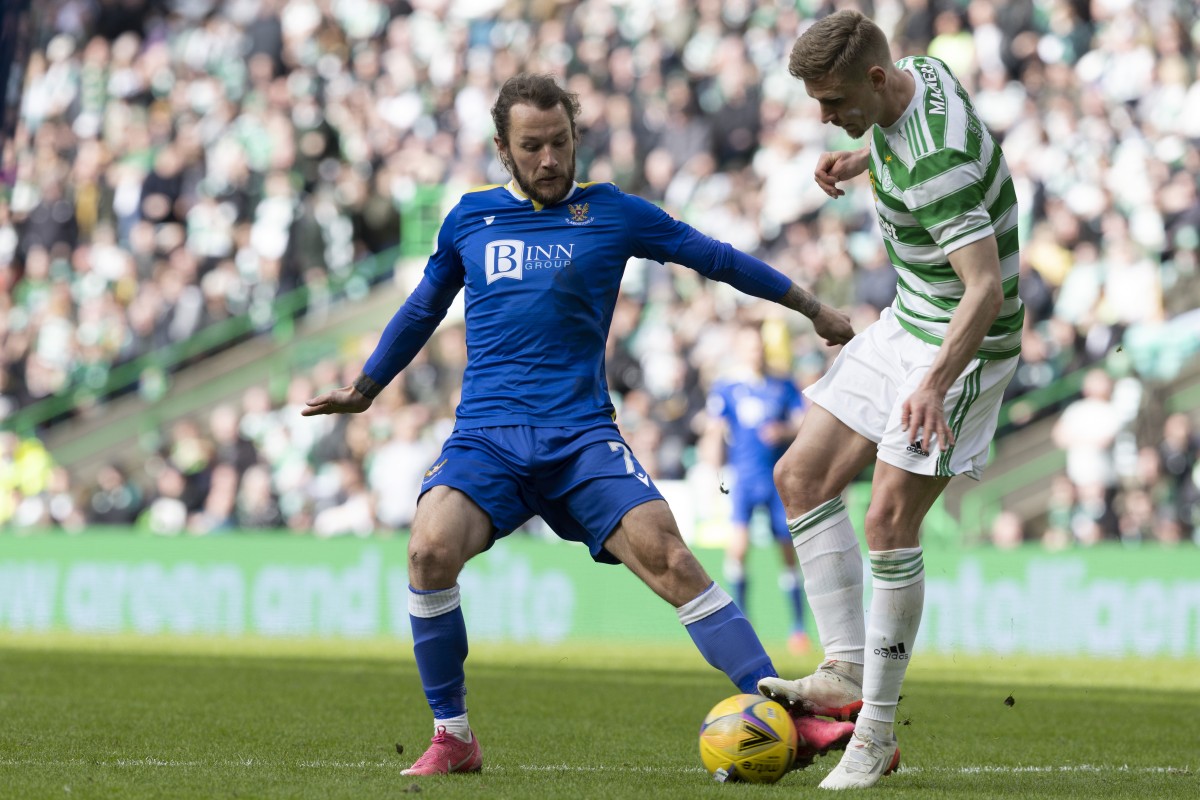 PHOTO: Stevie May nicks the ball off Carl Starfelt

Saints made another change on 77 minutes as Melker Hallberg was replaced by Jacob Butterfield.

It was turning into an afternoon to forgot for Callum Davidson’s men and a minute later Celtic made it seven. Substitute Kyogo Furuhashi showed neat footwork on the halfway line and he then played a long ball forward which Maeda chested down into the path of Abada who rifled a shot into the net.

It was a dominating performance from the hosts and they came narrowly close to getting an eighth goal with 11 minutes remaining as Maeda was inches away from connection with Furuhashi’s low cross from the right across the face of the Saints goal.

It was wave after wave of attack on the Saints goal and Furuhashi was next to have a go but he put his effort wide on 79 minutes. Abada then saw his right footed strike go wide of the mark on 81 minutes before O’Riley, who was looking to complete his hat-trick, fired wide shortly after.

A swift attack by The Hoops in the first minute of added on time saw O’Riley play in Abada but the Israeli forward couldn’t direct his effort on target to pile more misery onto Callum Davidson’s men.