Guy Melamed’s first half strike was enough for Saints as they saw off Dundee at the Kilmac Stadium at Dens Park this afternoon to progress to the last sixteen of the Scottish Cup.

The only goal of the game came on 20 minutes as Melamed produced a neat finish to tuck the ball beyond Dees keeper Adam Legzdins and into the left corner of the net, having been setup by Stevie May.

Dundee came close to an equaliser on 35 minutes as a Paul McMullan long range effort smashed off the crossbar.

In the second half Danny Mullen had a goal disallowed and then captain Charlie Adam saw his penalty brilliantly saved by Zander Clark.

Saints though held out and they are now in the hat for tomorrow’s Fourth and Fifth round draws which will take place at 2pm.

Saints return to Premiership action next Saturday when they welcome Aberdeen to Perth, kick off 3pm.

Saints got their Scottish Cup campaign underway this afternoon as they made the short trip along the A90 to take on Championship side Dundee at the Kilmac Stadium at Dens Park. Saints were last in action a fortnight ago as they defeated Ross County 1-0 at McDiarmid Park to secure a place in the top six. For today’s game Callum Davidson made one change to the side that started against the Staggies as Stevie May came in to replace Chris Kane who dropped to the bench. Dundee defeated Dunfermline Athletic 3-2 at the Kilmac Stadium at Dens Park last weekend to move up to third place in the Scottish Championship and manager James McPake made four changes to his team for this afternoon’s cup match. Cammy Kerr, Shaun Byrne, Charlie Adam and Danny Mullen came in to replace Christie Elliott, Paul McGowan, Osman Sow and Jason Cummings.

It was a glorious sunny spring afternoon in Dundee as David Wotherspoon got the match underway for Saints. It was an even opening to the match and the first chance of the game came on 11 minutes for the hosts as Charlie Adam’s corner from the left broke to Declan McDaid on the edge of the box and the midfielder unleashed a strike at goal which went wide.

Then shortly after Saints were awarded a free kick after Ali McCann was fouled by Charlie Adam. Liam Craig took the free kick however, his ball into the Dundee box was comfortably gathered by Adam Legzdins.

Saints record against Dundee in the Scottish Cup at Dens Park is not a good one as in the previous four meetings Saints have lost them all. However, on 20 minutes the Perth side took a step closer to changing that as they took the lead. A good long ball out of the defence by Jason Kerr played in Stevie May down the right wing and the Saints forward gathered the ball before cutting it back to Guy Melamed who side footed the ball into the bottom left corner of the net. 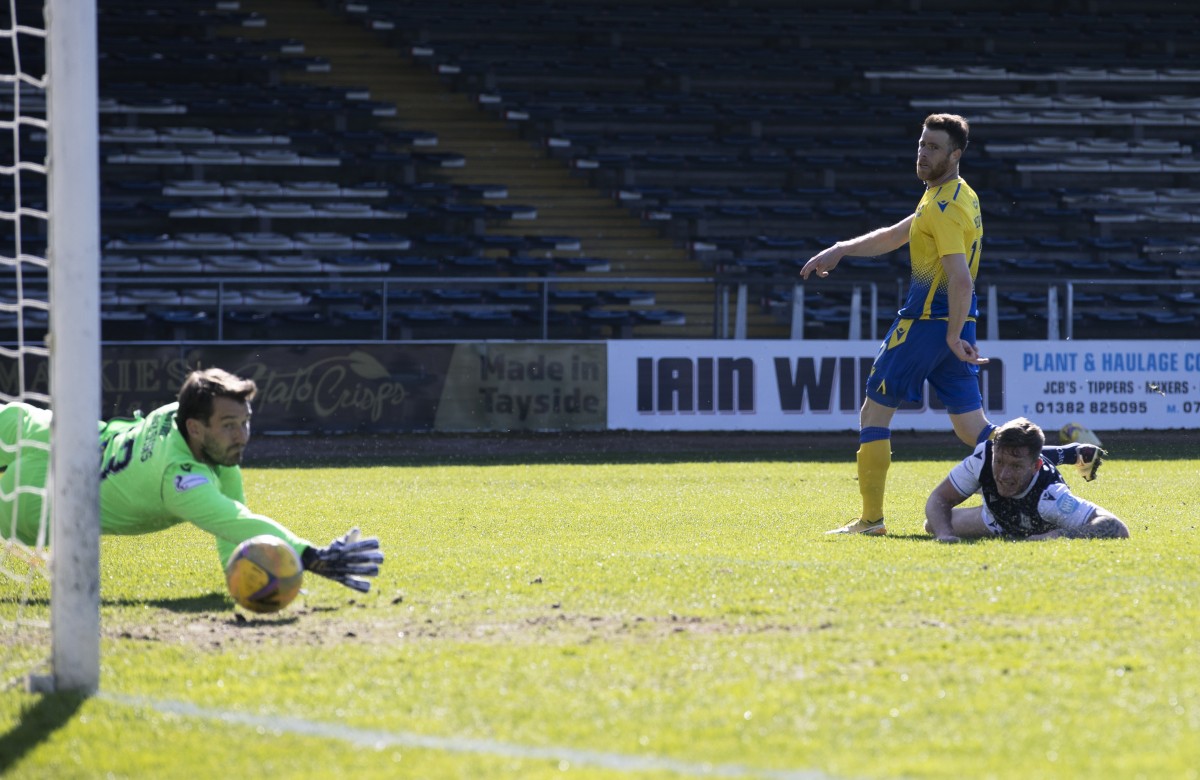 PHOTO: Guy Melamed scores the only goal of the game

Dundee tried to get a quick response to going behind as captain Charlie Adam had a go from 30 yards but his effort went inches over. Then on 27 minutes Dundee created another chance as McDaid fired an effort wide.

A minute later Saints were claiming for a penalty as May went down in the box after clashing with Lee Ashcroft however, referee Craig Napier waved away the appeals.

Saints were limiting the Dees to long-range efforts and with 10 minutes of the first half remaining Dundee had another shot from just outside the box. Paul McMullan picked the ball up and advanced forward before seeing his 25-yard effort hit the crossbar and go behind for a goal kick.

Just before half time Melamed got a couple of chances to extend Saints lead. On 42 minutes Saints hit the hosts on the break as Wotherspoon played in Melamed but Legzdins was out quick to block the ball. Then a minute later Callum Booth’s low ball from the left picked out Melamed but the Israeli forward couldn’t get his effort on target as it went over the bar.

Dundee thought they had equalised 6 minutes into the second half as Danny Mullen knocked the ball home from close range after Zander Clark was unable to hold onto a cross into the Saints box. However, the far side assistant had his flag up and a free kick was awarded to Saints although it was not clear if the decision to award the free kick was for offside or for a foul on Clark.

Dundee had started the second half well as they played a good pressing game and on 54 minutes they were awarded a free kick after a foul by Ali McCann on Paul McMullan. The free kick was taken by Mullen as he tried to play in Ashcroft at the back post however, play was pulled back following a foul by the defender.

On 64 minutes Saints made a double change as Chris Kane and Craig Bryson came on to replace Guy Melamed and Liam Craig. That was shortly followed by a couple of changes for the hosts as they introduced Paul McGowan and Jason Cummings into the action, replacing Lee Ashcroft and Max Anderson respectively.

Saints were awarded a free kick on 69 minutes after Bryson was fouled by Adam. Wotherspoon took the free kick and his ball into the box was headed back across the box by Liam Gordon but Legzdins came out well to gather the looping header from the Saints defender.

A good flowing passing move on 73 minutes involving Bryson and McCann saw Saints break forward before Bryson played the ball into the path of the advancing Booth however, he put his effort over.

Then 2 minutes later Dundee were awarded a penalty after Clark took out Mullen as both players chased down a long ball into the Saints box. Charlie Adam stepped up to take the penalty but Clark redeemed himself as he got down low to his left to tip the ball onto the post before gathering it at the second attempt. 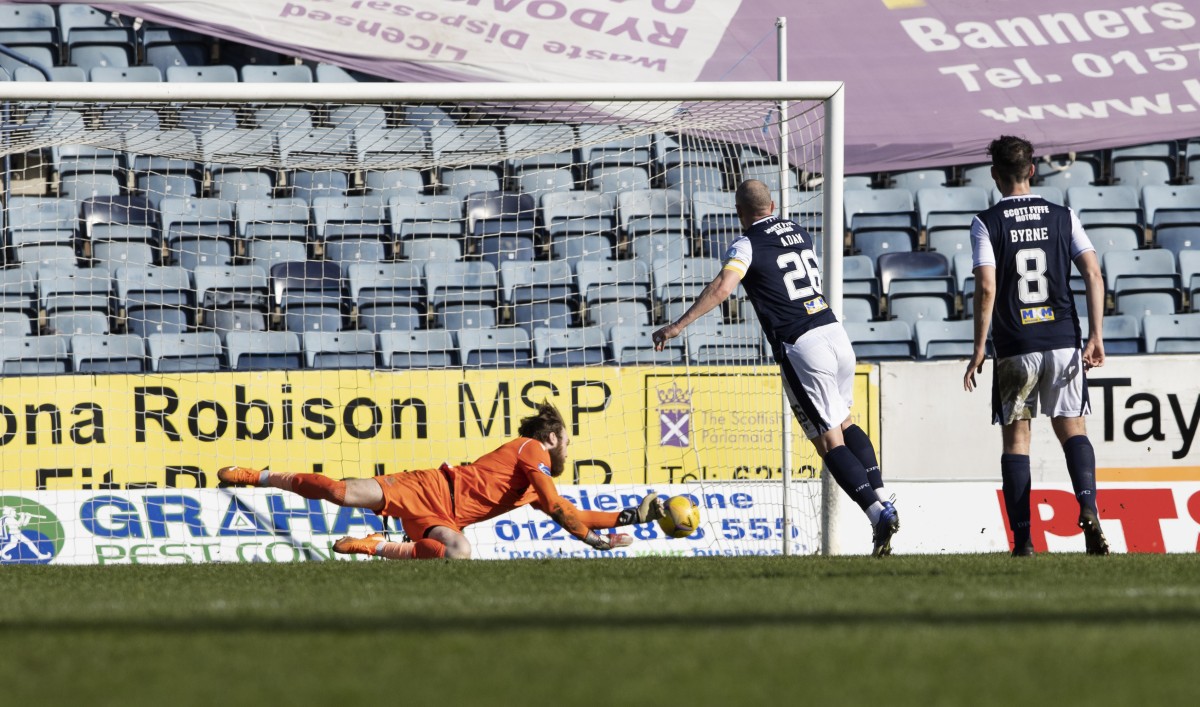 Saints then made their third change of the game as Glenn Middleton came on to replace Stevie May.

Saints got a great chance to double their advantage with 6 minutes remaining as Bryson played in Middleton and with the goal at his mercy he dragged his effort wide.

Saints though held out to win the game and they can now look forward to see who they will get in the next round in tomorrow’s draw.

Picture: Guy Melamed celebrates his goal with Stevie May