Second half goals from Shaun Rooney and Ali Crawford saw Saints progress to the semi-finals of the Premier Sports Cup this evening.

Dundee created several good chances to take the lead but they found Zander Clark in top form in the Saints goal.

Rooney gave Saints the lead with 20 minutes remaining as he got on the end of a low Liam Craig corner before slotting it past Adam Legzdins. Crawford then got his first goal for the club on 84 minutes as he sealed Saints progression to the semi-finals with a fine finish.

The draw for the semi-finals will take place tomorrow evening at Celtic Park following Celtic’s quarter-final tie with Raith Rovers.

Next up for Saints is a trip to Easter Road on Sunday to take on Hibernian in a cinch Premiership match, kick off 3pm.

Saints continued their defence of the League Cup this evening as they made the trip along the A90 to take on Dundee at the Kilmac Stadium at Dens Park. Saints defeated Aberdeen 1-0 at Pittodrie on Saturday and Callum Davidson made two changes to his starting eleven for tonight’s Premier Sports Cup game. Murray Davidson and Michael O’Halloran dropped out and they were replaced by Liam Craig and Ali Crawford. Dundee lost 1-0 to city rivals Dundee United at Tannadice on Sunday and manager James McPake made one change to his starting eleven as Liam Fontaine came in to replace Ryan Sweeney.

Liam Craig got the match underway for Saints and they created the first chance of the match on 2 minutes however, Chris Kane’s deflected strike was well held by Adam Legzdins.

The hosts created a chance 2 minutes later as they came close to taking the lead. Paul McGowan sent  a dangerous corner into the Saints box however, Zander Clark was alert to the danger as he brilliantly pushed the ball away after it had taken a touch off Jamie McCart.

It was a lively start to the match and play very quickly switched to the other end as Callum Booth curled an effort wide.

On 11 minutes good play by Saints saw space open up for David Wotherspoon on the edge of the area who unleashed a strike at goal which was tipped over for a corner by Legzdins. Craig took the corner from the left and he played it to Ali Crawford at the edge of the box and the on-loan Bolton midfielder had a shot at goal however, his effort was blocked by the Dee defence as they cleared the danger.

Then 3 minutes later Dundee came close to taking the lead as Leigh Griffiths picked out Jordan McGhee but Clark pulled off a fantastic point blank save to keep the tie level. 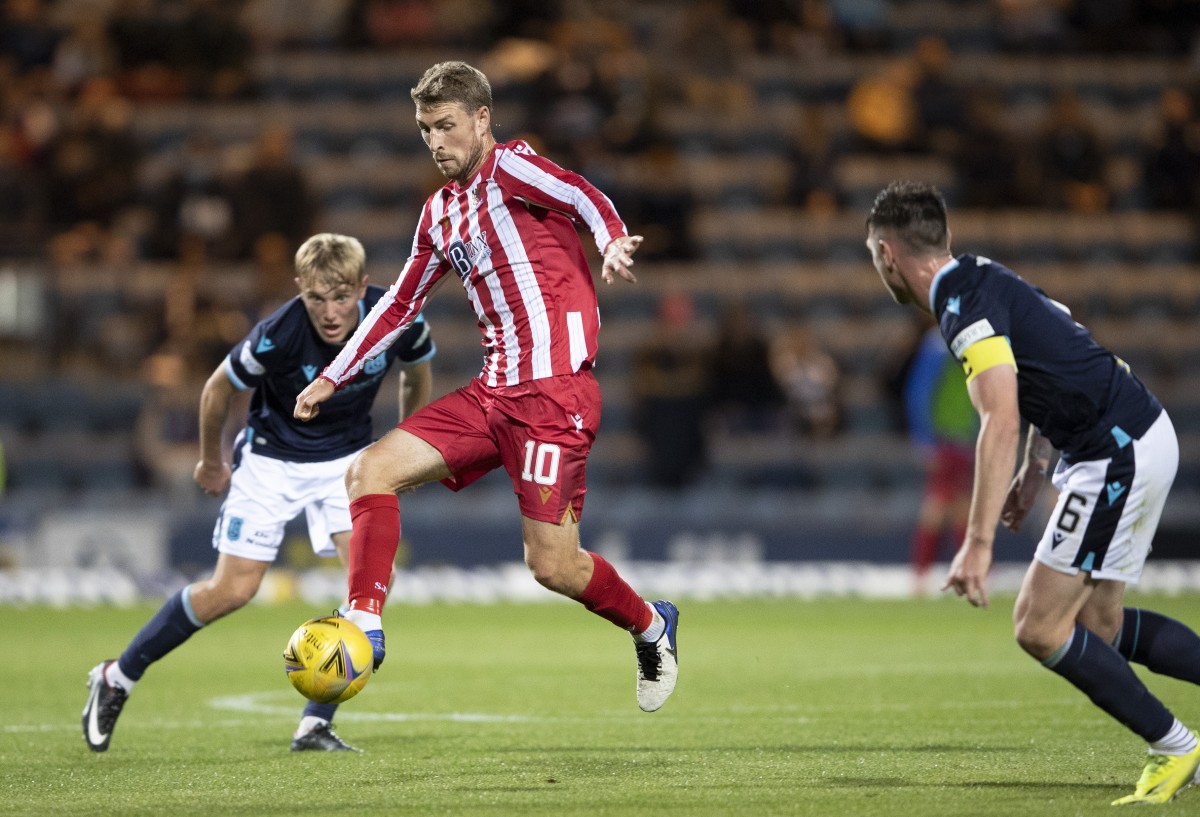 PHOTO: David Wotherspoon gets the ball ahead of Max Anderson

It was a great atmosphere in Dens with the Saints fans in good voice. On 15 minutes a long ball forward was headed down by Kane to Glenn Middleton however, he couldn’t direct his effort on target.

On 21 minutes the ball broke to Griffiths and the on-loan Celtic forward tried to catch out Clark but he put his effort inches wide.

Just after the half an hour mark Max Anderson sent over an inviting cross from the left which was met by Cammy Kerr however, Clark produced another great save as he got down low to the header to turn it behind for a corner.

The tempo of the game had decreased as the first half progressed and with 4 minutes of the half remaining a good long ball forward by James Brown caused all sorts of problems in the Dee defence as it eventually broke to Middleton who curled his effort wide from a tight angle.

Then just before half time Saints were forced to make a change as Michael O’Halloran came in to replace the injured James Brown.

Dundee were out the traps quickly in the second half and they were awarded free kick following a foul on Max Anderson by Ali Crawford, who was booked by referee Steven McLean. The free kick was taken by Griffiths and his 30-yard effort was well saved by Clark and the Saints number one got up quick to deny McMullan who was first to react to the loose ball.

Saints weathered the fast start by the hosts and the game soon settled down. On 64 minutes Saints made a change as Stevie May came on to replace Glenn Middleton.

A good move by Saints on 68 minutes saw O’Halloran break down the right before seeing his shot was turned behind for a corner by Lee Ashcroft. Saints continued to the pressure on the Dundee goal and shortly after they won another corner which was taken Craig and his low delivery was met by Shaun Rooney who did well to hold off the challenge from Lee Ashcroft before turning to knock the ball home from close range to give Saints the lead. 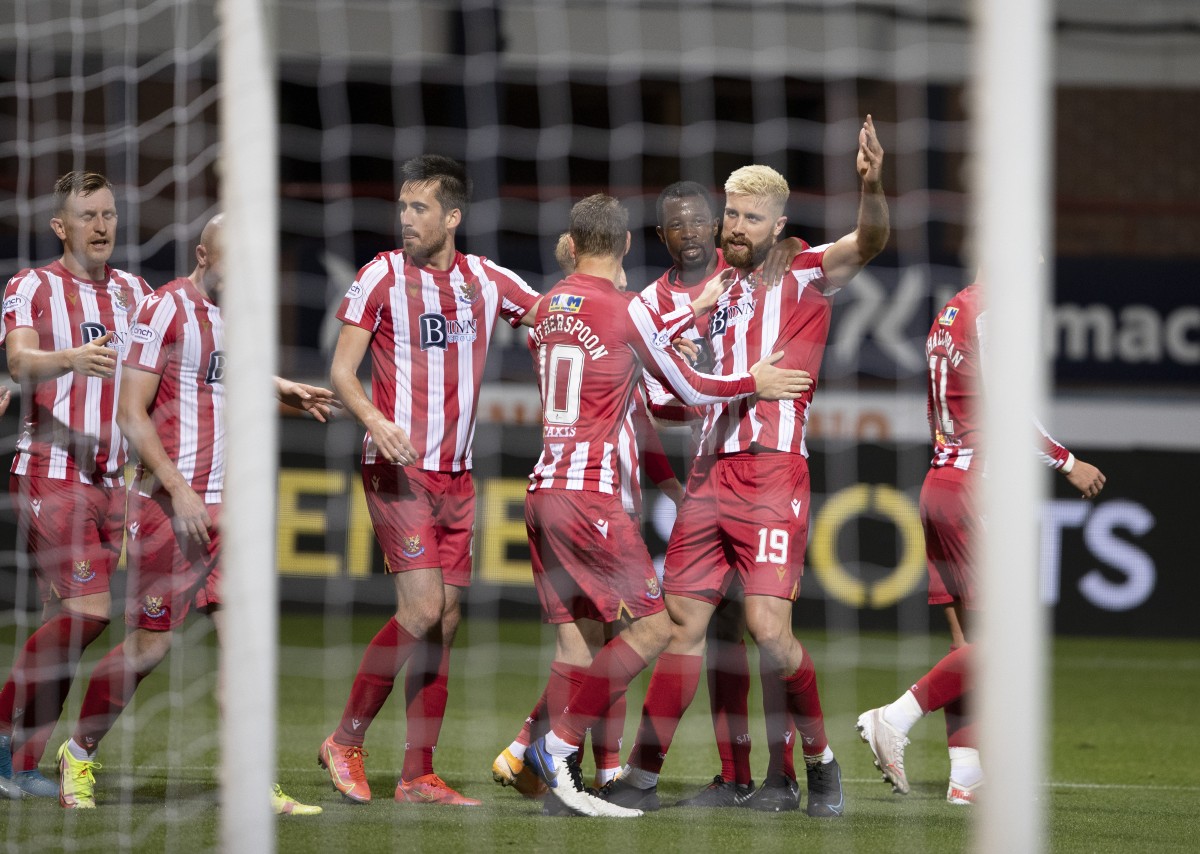 Dundee then made a couple of changes as Cillian Sheridan and Luke McCowan were introduced into the action as they looked to get an equaliser.

However, Saints secured their progression to the semi-finals with 6 minutes remaining. Booth and Wotherspoon linked up well down the left and the former did well to slid in and win the ball from Kerr before advancing into the Dundee box and picked out Ali Crawford who guided the ball home with a tidy low finish to book another visit to Hampden for Saints. 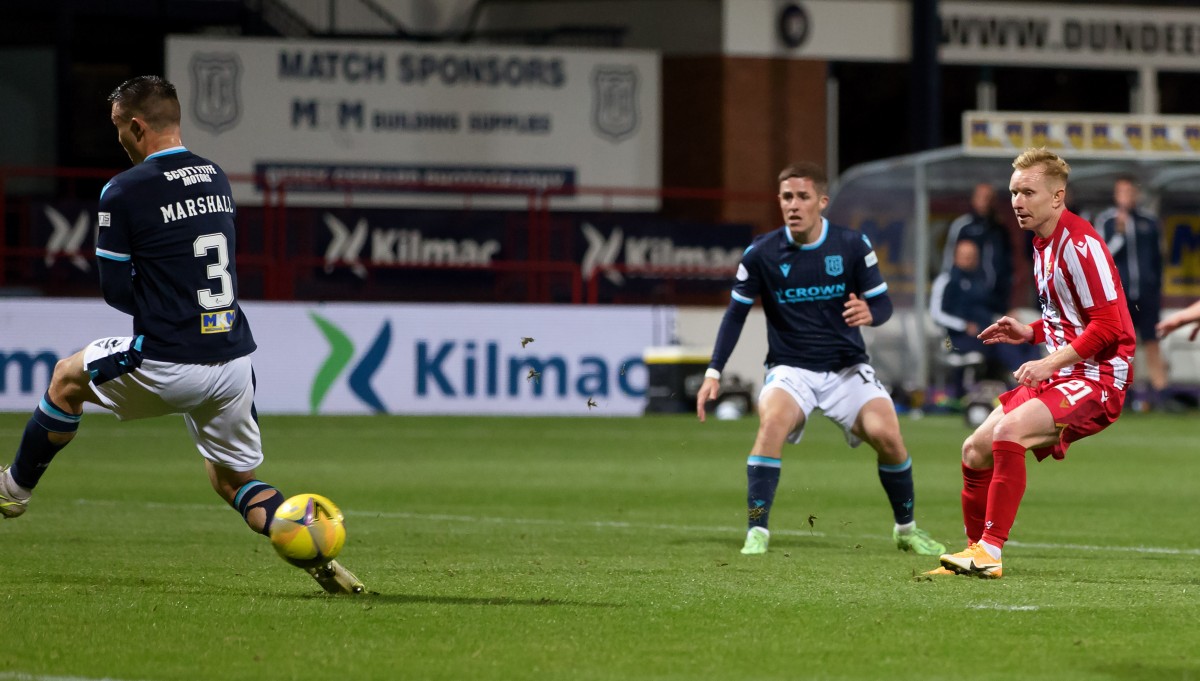