Saints slipped to defeat at the Kilmac Stadium at Dens Park this evening as Dundee brought an end to Saints seven game unbeaten run against their Tayside rivals.

The only goal of the game came 6 minutes before half time as Danny Mullen despatched a low strike on the turn beyond Zander Clark.

Saints will look to bounce back on Saturday when they welcome Ross County to McDiarmid Park, kick off 3pm.

The Kilmac Stadium at Dens Park was the destination for Saints this evening as they looked to bounce back from Saturday’s 2-1 defeat to Hibs in Perth. Callum Davidson made two changes to his starting eleven for this evening’s match against Dundee as Cammy MacPherson and Chris Kane came in to replace Lars Dendoncker, who dropped to the bench, and the suspended Craig Bryson. Dundee defeated Motherwell 3-0 at the Kilmac Stadium at Dens Park at the weekend and there was one change to their starting eleven this evening as Liam Fontaine came in and he replaced Lee Ashcroft who picked up an injury during Saturday’s 3-0 win.

Paul McGowan got the match underway for Dundee and the hosts started on the front foot as they created the first opportunity of the match after 3 minutes. A McGowan corner from the right was met by Charlie Adam who headed the ball goal wards but Zander Clark was alert to the danger as he comfortably gathered the ball.

It was a lively opening to the game and on 8 minutes Luke McCowan broke into the Saints box before seeing his strike blocked by Shaun Rooney. Then a couple of minutes later Rooney went on a mazy run forward before feeding the ball to Eetu Vertainen but the danger was dealt with by the home defence. Play continued and Adam played a crossfield pass to Paul McMullan who broke into the Saints box before putting his effort wide.

On 21 minutes a good Saints move saw Chris Kane play in Ali Crawford who dragged his effort wide however, play was pulled back as midfielder was deemed to have been in an offside position.

Saints were coming into the game more and 7 minutes later space opened up for Callum Booth down the left as he advanced forward before seeing his strike deflected behind for a corner. 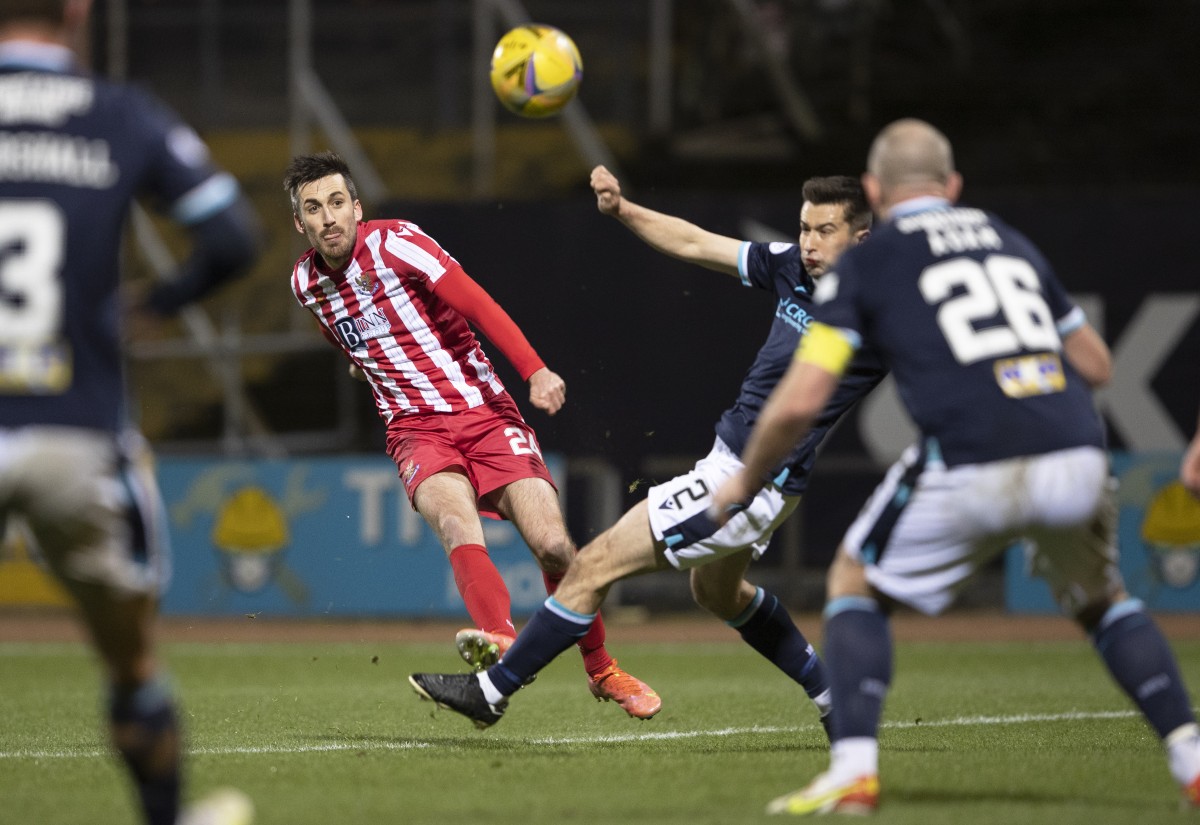 Dundee were looking dangerous going forward and they came within inches of taking the lead on 36 minutes as McCowan saw his driving effort crash off the post. The pressure from the hosts eventually told 3 minutes later as Dundee broke the deadlock. McGowan played a neat ball into Danny Mullen and the forward turned before despatching his strike into the far corner of the net.

Saints tried to get a quick response as on 41 minutes Booth slipped the ball into the path of Vertainen whose shot on the turn was comfortably gathered by Adam Legzdins.

Then just before half time Adam got a sight of goal as the Dee captain saw his strike from 25 yards go narrowly wide of Clark’s left hand post.

PHOTO: Chris Kane is closed down by Liam Fontaine

Before the second half could get underway Saints made a change in midfield as Liam Craig came on to replace Murray Davidson.

Saints started the second half brightly and a good early move saw Vertainen head the ball down to Booth who carried it forward before passing to Crawford whose cross was turned behind for a corner. Crawford took the corner from the left and his delivery was met by Kane but the Saints number nine couldn’t direct his header on target.

Dundee almost doubled their lead shortly after but Clark made excellent save to keep Saints in the game as he turned Mullen’s header from a Jordan Marshall cross over for a corner.

McCowan was a threat all evening for the hosts and on 65 minutes the winger got another sight of goal however, he put his effort over.

Play then quickly switched to the other end as Rooney’s cross from the right was met by Vertainen but Legzdins made a good save as he pushed away the header from the Finnish forward.

That provide to be Vertainen’s last involvement of the game as just after this he was replaced by Viv Solomon-Otabor. 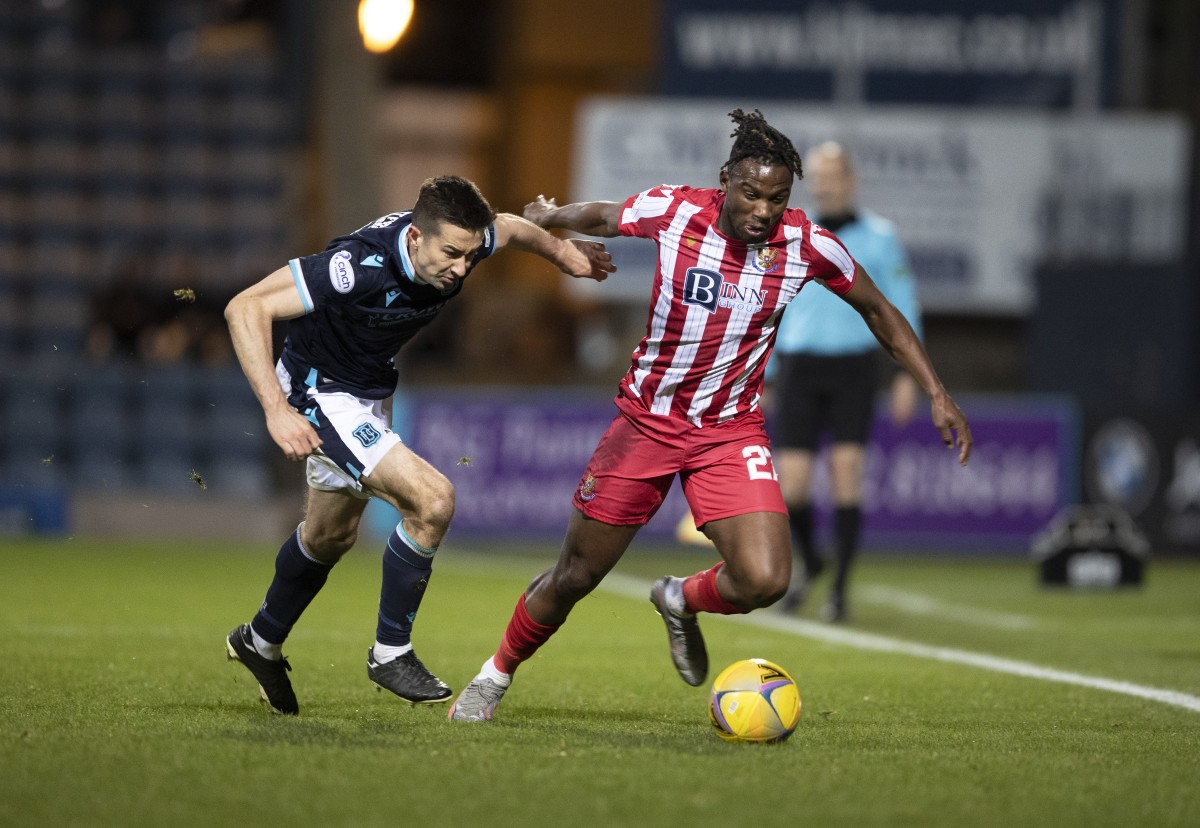 PHOTO: Viv Solomon-Otabor gets away from Luke McCowan

The hosts continued to press for a second goal and on 71 minutes a headed clearance from Rooney was gathered by Max Anderson but the midfielder’s strike didn’t trouble Clark. Dundee got another opportunity to double their advantage on 77 minutes as Mullen gathered the ball from McCowan but Clark was more than equal to the strike from the in-form forward.

James McPake’s side really should have wrapped up the points with 8 minutes remaining as following a good passage of play the ball broke to the unmarked Paul McMullan at the back post however, he blazed the ball over with the goal at his mercy.

Saints continued to battle away in the closing stages but Dundee were able to see the game out as Saints couldn’t find a way back into the game.

Picture: Eetu Vertainen gets between Charlie Adam and Luke McCowan