Saints took the lead on 17 minutes as Cammy MacPherson capitalised on a mistake by Jeando Fuchs and the on-loan St Mirren midfielder setup Ali Crawford who curled a fine effort home from 20 yards.

United pressed in the second half to get back into the game but they found Clark in top form in the Saints goal as he pulled off a string of wonderful saves to seal the win.

Next up for Saints is a home game against St Mirren next Saturday, kick off 3pm.

The City of Discovery was the destination for Saints this afternoon as they looked to build on their 1-1 draw with Hearts in midweek as they took on Dundee United at Tannadice. There were four changes to the team which started on Wednesday evening as Callum Davidson brought in Hayden Muller, Craig Bryson, Michael O’Halloran and Glenn Middleton and they replaced Lars Dendoncker, Murray Davidson, James Brown and Stevie May. A Peter Pawlett equaliser just before half time saw Dundee United comeback to earn a 1-1 draw at Livingston in midweek and Head Coach Thomas Courts also made four changes to his starting eleven. Kieran Freeman, Peter Pawlett, Declan Glass and Ilmari Niskanen all dropped to the bench and they were replaced by Kerr Smith, Louis Appéré, Jeando Fuchs and Logan Chalmers.

Before the match kicked off there was a minute’s applause for Walter Smith who sadly passed away earlier this week.

Nicky Clark got the match underway for the hosts but it was Saints who created the first chance of the match after 45 seconds as good pressing by Chris Kane saw Charlie Mulgrew turn the ball behind for a corner. It was taken by Cammy MacPherson and he tried to pick out Glenn Middleton in the box but he couldn’t make a clean connection with the ball which was then played back into the centre of the box as Liam Gordon got up to make a connection with the delivery however, the header from the new Saints captain was comfortably gathered by Benjamin Siegrist.

It was a good start to the match by Saints and on 4 minutes Hayden Muller’s long ball forward was misjudged by Kerr Smith as Middleton got in behind the defender before sending over a cross which was turned behind for another corner by Ryan Edwards. MacPherson again sent in the delivery from the left which picked put Chris Kane however, his flicked effort at the near post hit the side netting. 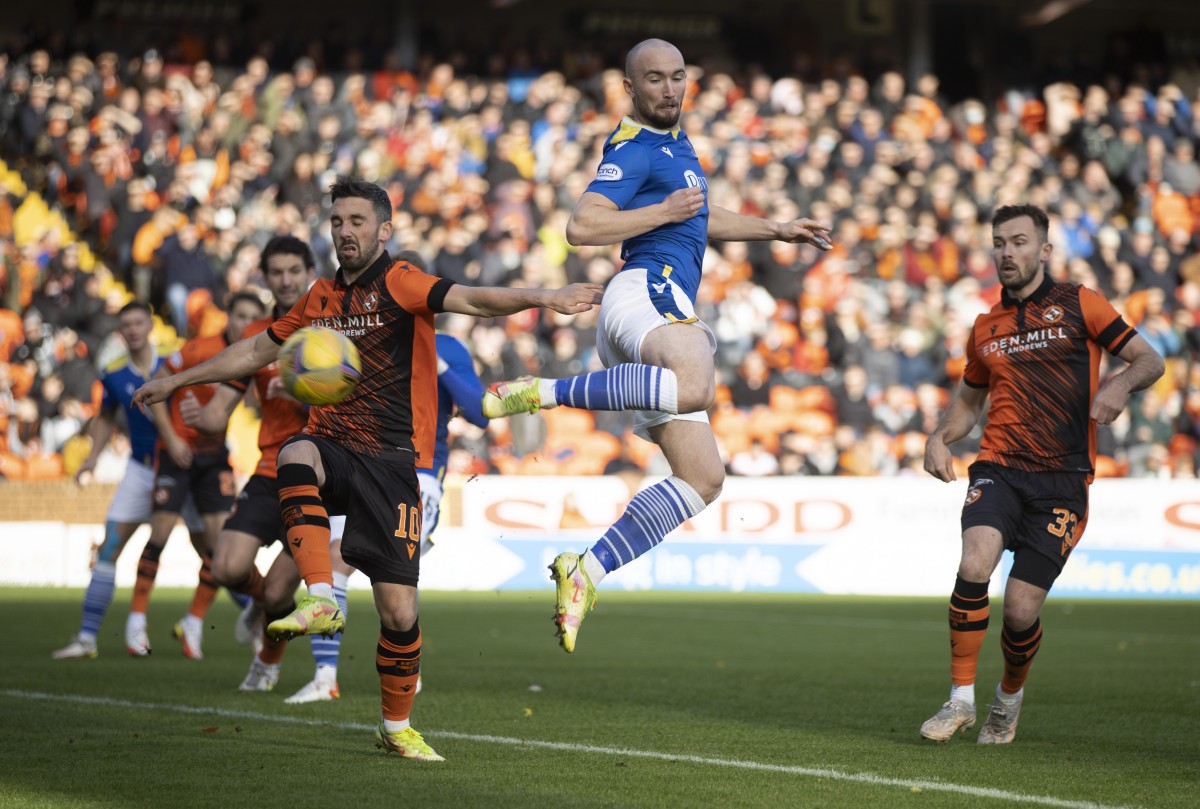 United created their first opportunity of the match on 9 minutes as a quick counter attack saw Dylan Levitt played in however, the shot from the on-loan Manchester United midfielder was tame as Zander Clark comfortably gathered.

Saints good start to the match was rewarded on 17 minutes as they took the lead. Good pressing by MacPherson saw him win the ball from Jeando Fuchs and play in Ali Crawford who broke forward before firing a beautiful curling effort beyond Siegrist from 20 yards into the bottom corner.

On 27 minutes, good pressing by Louis Appéré saw him win the ball from Michael O’Halloran and the forward then broke towards the edge of the box before seeing his strike turned behind for a corner by Muller. Levitt whipped the ball in from the right and Edwards bulleted a header towards goal but Clark made a brilliant one-hand save to turn the ball behind for another corner. 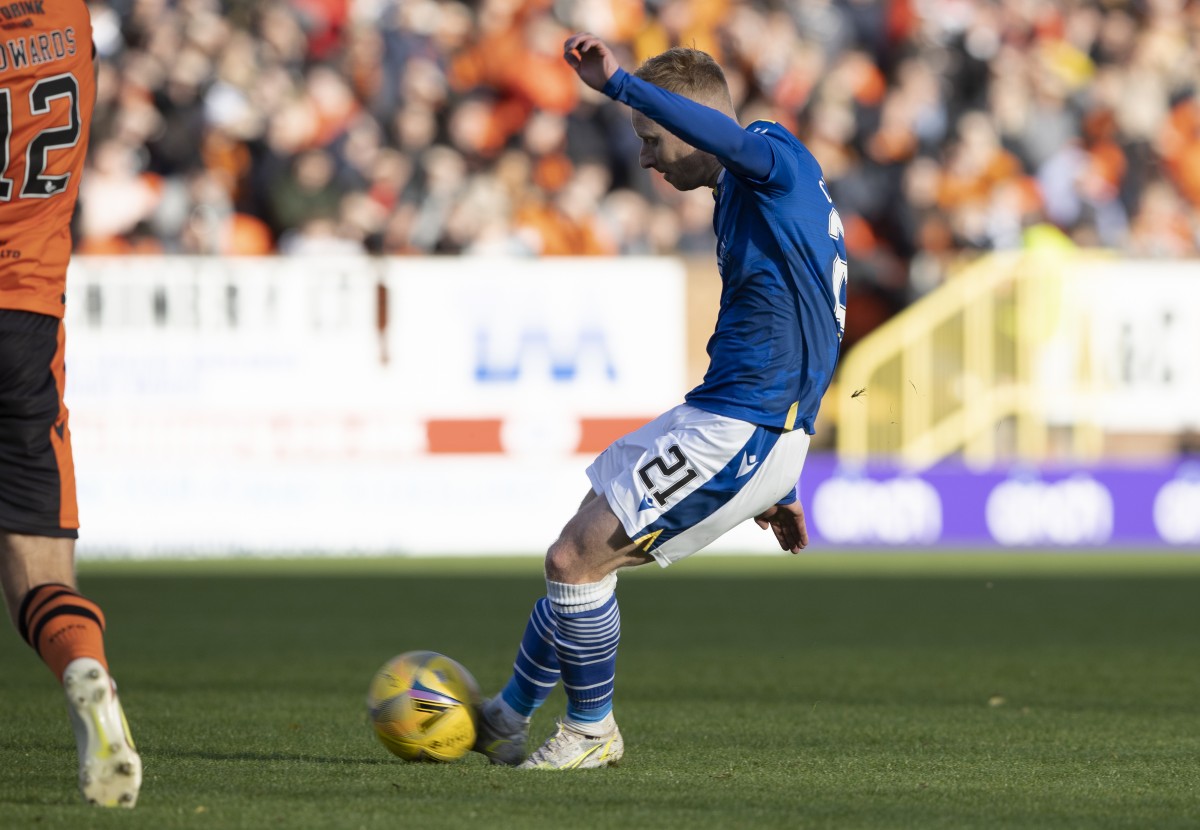 United made a double change before the second half could get underway as Peter Pawlett and Ilmari Niskanen came on to replace Logan Chalmers and Louis Appéré.

2 minutes into the second half O’Halloran did well to get past Scott McMann and he then broke towards the United box before unleashing a strike at goal however his effort lacked composure as it went high into the Eddie Thompson Stand.

United were awarded a free kick out wide on the right on 59 minutes after Muller fouled McMann. Levitt sent the free kick into the box and it was met by Edwards but Clark again made a fine stop as he turned the defender’s header over for a corner.

The hosts were having a good spell in the match and shortly after a United corner broke to Ian Harkes but his effort was blocked by the Saints rearguard. Play continued and the ball was then crossed back into the Saints box by Fuchs which Nicky Clark got on the end of however, his header didn’t trouble Clark. 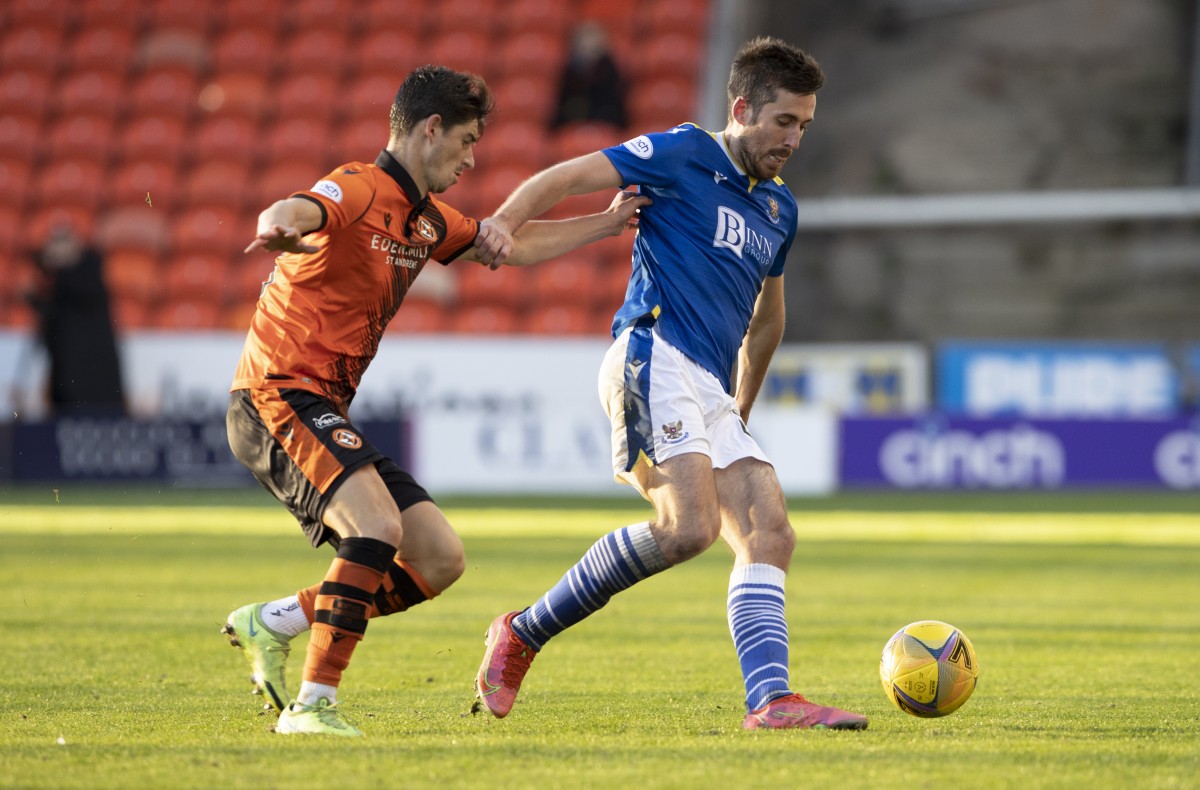 United continued to apply the pressure and Clark produced more heroics on 71 minutes as the Saints number one made a fantastic double save to deny Pawlett from close range.

Saints then made their first change of the game on 76 minutes as Reece Devine came on to replace Michael O’Halloran. That was followed by a double change shortly after as Glenn Middleton and Hayden Muller were replaced by Stevie May and Efe Ambrose.

Dundee United continued to press for an equaliser but they couldn’t find a way past a formidable Clark. With 6 minutes remaining the Saints number one made another incredible double save. Harkes went on a driving run to the by-line before sending over the ball to Nicky Clark who knocked the ball back to Pawlett but Clark made a brilliant save to deny the former Aberdeen midfielder. Clark then reacted quickly to the headed rebound effort from Nicky Clark as he turned it behind for a corner.

It was back to the walls stuff for Saints and right at the death Clark again came up with the goods as he denied Nicky Clark from close range to ensure that Saints went back down the road to Perth with the three points. 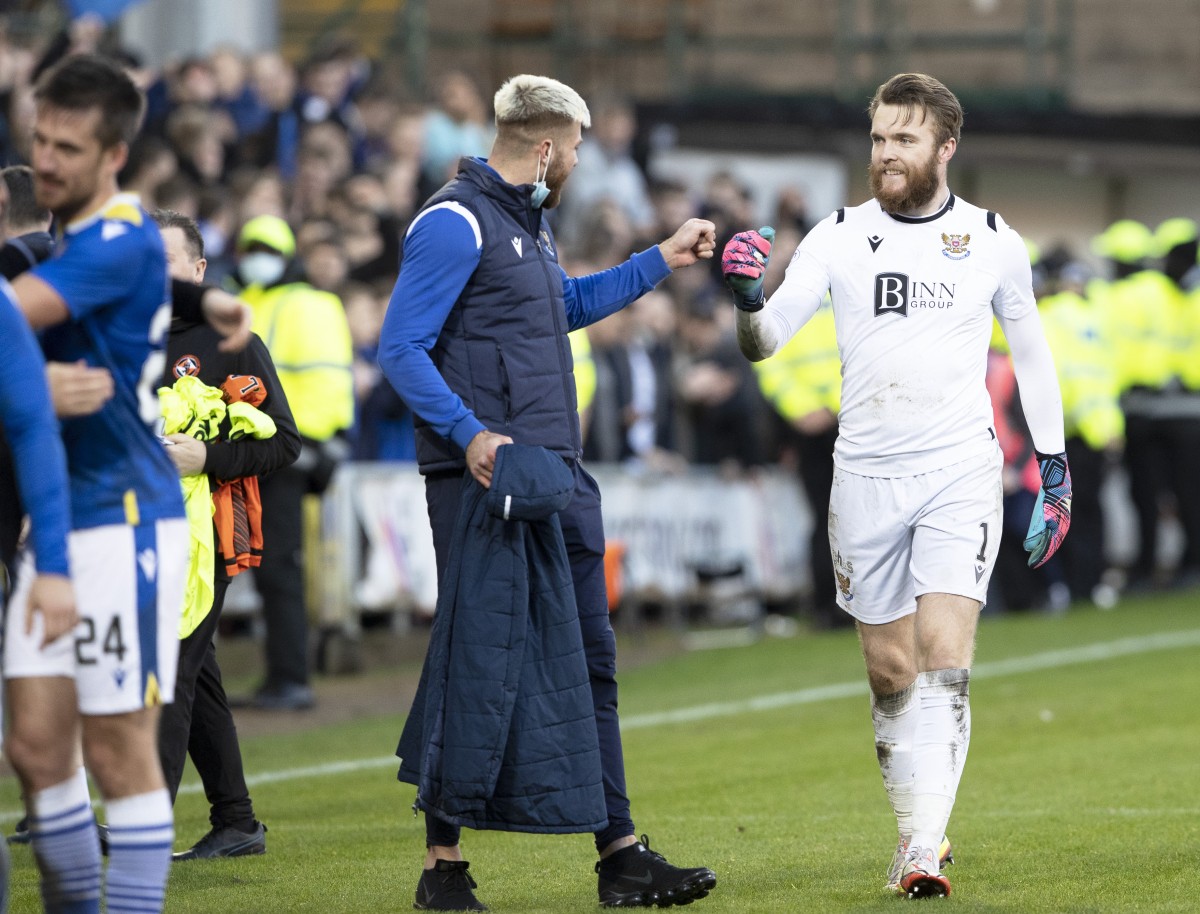 Picture: The Saints players gather around man of the match Zander Clark at the end of the game