Saints got 2022 off to a disappointing start as they went down 2-0 to Hearts at Tynecastle Park this evening.

Despite putting in promising showing during the first half Saints would find themselves a goal down within 20 seconds of the start of the second half after Josh Ginnelly latched onto Barrie McKay’s long ball before slotting it past Zander Clark.

Ginnelly then sealed the points for the hosts on 75 minutes as he got his second of the game. McKay was again the provider and his delivery from the left was met by the Englishman who slammed the ball into the net.

Saints are back in action on Saturday as they get their defence of the Scottish Cup underway with a trip to League 2 side Kelty Hearts, kick off 3pm.

With the winter break over Saints returned to action this evening as they made the trip to Edinburgh to take on Hearts at Tynecastle Park. Saints last game was a 3-1 Boxing Day defeat to Celtic and since then Callum Davidson has been busy in the transfer market as he has brought in Nadir Çiftçi, Tony Gallacher and Daniel Cleary as well as securing Ali Crawford on a permanent contract. Whilst Charlie Gilmour has returned from his loan spell at Alloa Athletic. There have also been some departures as well with the loan deals for Lars Dendoncker, Reece Devin and Hayden Muller all coming to an end whilst Viv Solomon-Otabor has also departed the club. That meant there was six changes to Saints starting eleven this evening as Zander Clark, Daniel Cleary, Murray Davidson, Michael O’Halloran, Cammy MacPherson and Nadir Çiftçi all came in to replace Elliott Parish, Lars Dendoncker, James Brown, Craig Bryson, Ali Crawford and Viv Solomon-Otabor. Prior to the winter break Hearts defeated Ross County 2-1 at Tynecastle Park and Head Coach Robbie Neilson made four changes to his starting eleven this evening. Taylor Moore, Andy Halliday, Aaron McEneff and Ben Woodburn all dropped out and they were replaced by Stephen Kingsley, Gary Mackay-Steven, Cameron Devlin and Josh Ginnelly.

Cameron Devlin got the match underway for the hosts and after an even opening to the match Hearts created a chance on 10 minutes. Barrie McKay sent a deep ball into the box which Alex Cochrane headed back across goal, picking out Michael Smith however, the defender couldn’t direct his effort on target as his volley went high into the stand. Then a minute later Hearts were appealing for a penalty after Josh Ginnelly went down in the box under the challenge from Liam Gordon but referee Nick Walsh dismissed the appeals after looking to the Main Stand assistant for guidance.

The home support thought they had taken the lead on 24 minutes as McKay unleashed a strike from just inside the box which went inches wide as it was turned behind for a corner by Zander Clark.

It wasn’t all one-way traffic as a minute later play quickly switched to the other end. A long ball deep into the Jambos half by Daniel Cleary, who was making his Saints debut, played in fellow debutant Nadir Çiftçi however, the strike from the Turkish forward was straight at Craig Gordon.

Çiftçi was having a good game up top for Saints and on 37 minutes the forward got another sight of the Hearts goal however, his effort was well saved by Gordon. 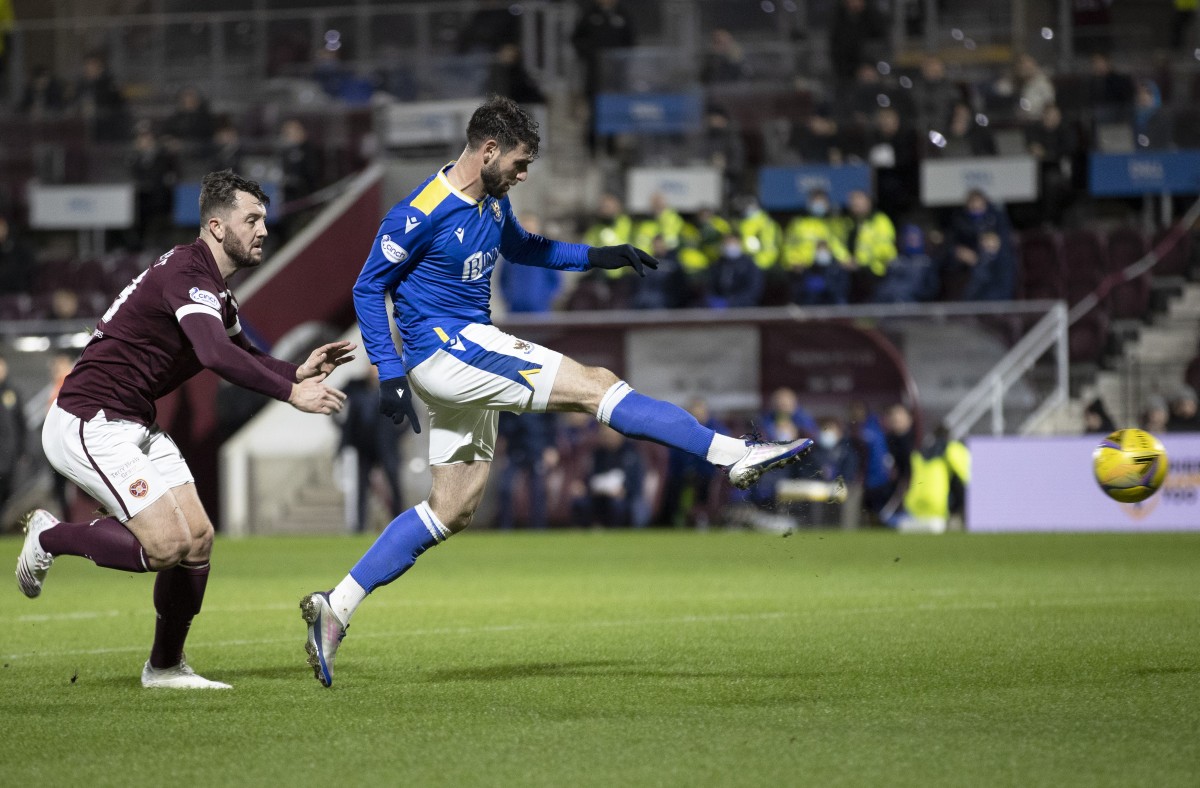 The Jambos then quickly switched play to the other end as shortly after as Stephen Kingsley had a go from distance but Zander Clark was equal to the effort as he comfortably gathered the ball.

Despite a promising performance from Saints during the first half the good work was undone 20 second into the second half as Hearts took the lead. A MacKay through ball down the right played in Ginnelly who raced into the box before calmly despatched the ball beyond Clark. 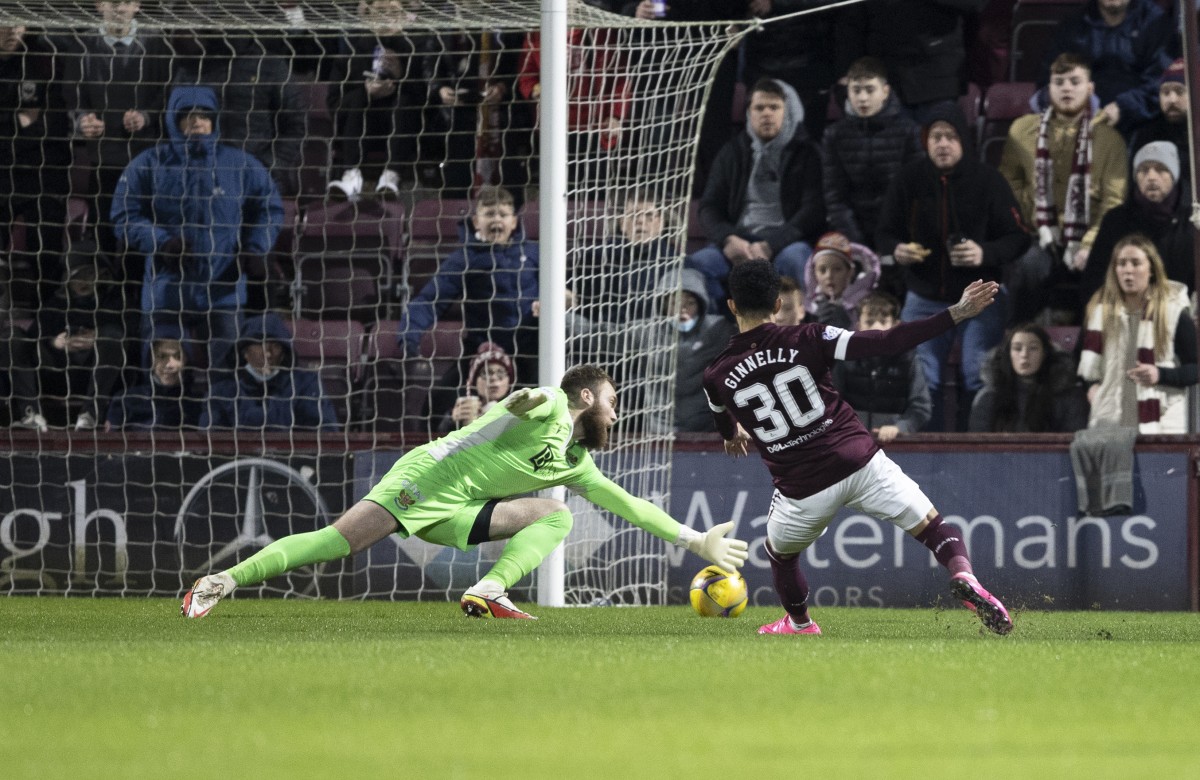 PHOTO: Josh Ginnelly puts the ball past Zander Clark to give Hearts the lead

The first booking of the game came on the hour mark as Daniel Cleary was shown a yellow card for a foul on Devlin as Hearts were awarded a free kick in a promising position. Both Barrie McKay and Stephen Kingsley stood over the free kick and it was taken by the latter however, the strike from the defender hit the wall as Saints then cleared their lines.

Hearts continued to look for a second and on 63 minutes a McKay corner from the left was headed on to Peter Haring who couldn’t direct his effort on target.

Then a minute later Michael O’Halloran went on a good run down the right before picking out Stevie May in the box however, the effort from the Saints number 7 lacked power as Gordon gathered. That proved to be May’s last involvement in the match as he was then replaced by Chris Kane as Callum Davidson made a double change with Charlie Gilmour also coming on, replacing Jacob Butterfield.

Saints continued to look for a way back into the game and on 66 minutes Çiftçi saw his strike on the turn saved by Gordon.

However, Hearts doubled their lead with 15 minutes remaining. Saints lost possession on the halfway line as Çiftçi was unable to hold the ball up. McKay then broke down the left, away from O’Halloran and Çiftçi who tripped over each other, before picking out Ginnelly in the box who smashed the ball past Clark for his and Hearts second of the evening.

On 79 minutes Saints were awarded a free kick in an inviting positon after Kane had been fouled by John Souttar. MacPherson took the free kick however, he was inches away from getting it on target.

Saints then made a couple more changes as Murray Davidson and Nadir Çiftçi were replaced by Ali Crawford and Glenn Middleton. 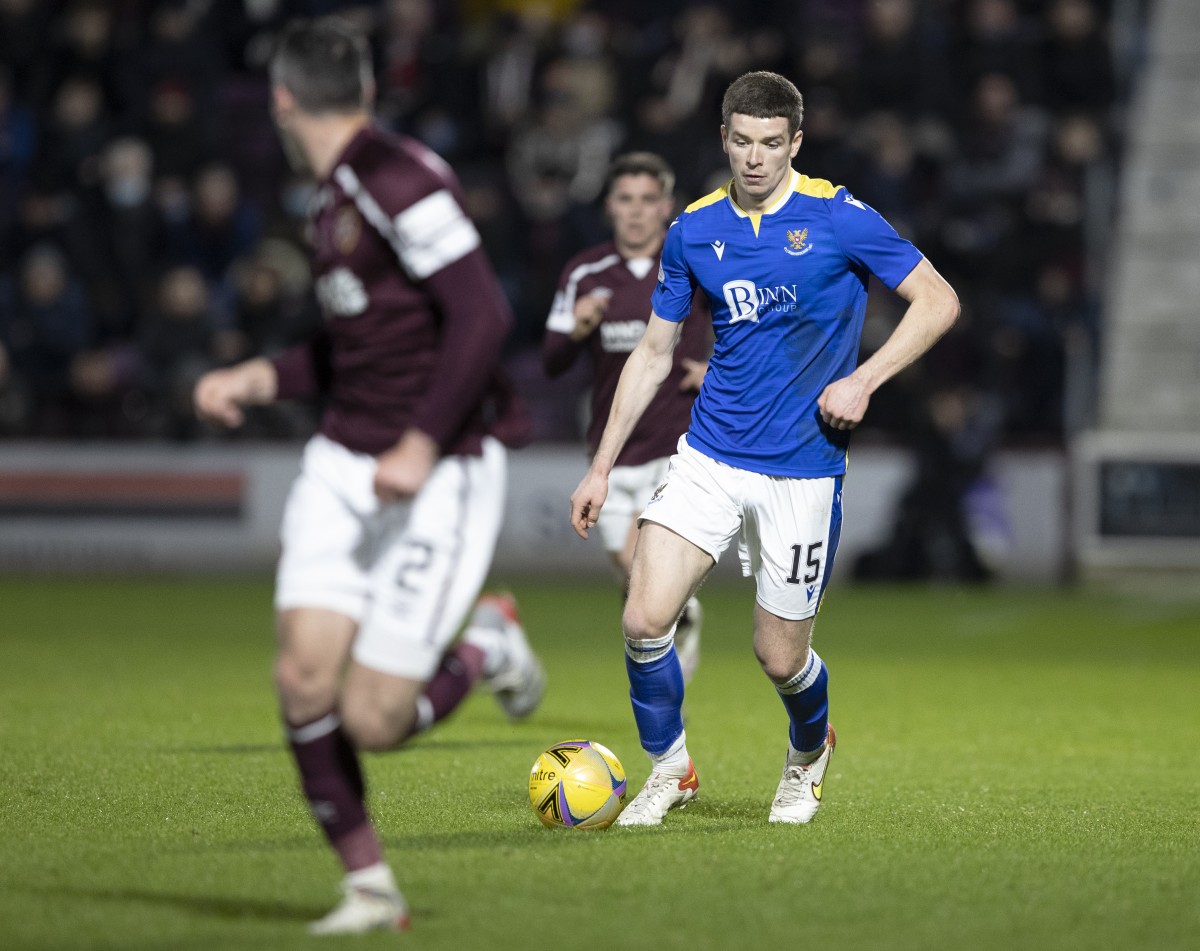 The Jambos came close to a third with 8 minutes remaining but Clark produced a good save to keep out a strike from Cameron Devlin.

Saints were awarded a free kick in the closing stages of the match after Callum Booth was fouled on the edge of the area by Smith. Crawford took the free kick but the wicked delivery into the box by the substitute was turned behind for a corner by Alex Cochrane as Hearts comfortably saw the game out.