Glenn Middleton’s first half strike secured the 3 points for Saints against Hibs at Easter Road this afternoon.

The only goal of the game came on 22 minutes as Middleton capitalised on a Ryan Porteous mistake. The clearance from the Hibs defender was played straight to Middleton who took a touch before slamming the ball beyond Ofir Marciano.

Martin Boyle thought he had equalised for Hibs in the second half but was flagged offside.

Saints came close to a second goal in stoppage time as substitute David Wotherspoon almost made a connection with Shaun Rooney’s cross into the box.

Today’s result sees Saints move up above Livingston and into fifth place in the Scottish Premiership on goal difference.

Next up for Saints is the Scottish Cup semi-final tie against St Mirren at Hampden Park next Sunday, kick off 2:15pm.

After Sunday’s historic Scottish Cup win at Rangers which saw Saints progress to the Scottish Cup semi-finals, Saints returned to league action this afternoon as they took on Hibs at Easter Road. Callum Davidson made seven changes to the starting eleven for this afternoon’s match as Elliott Parish, James Brown, Callum Booth, Craig Bryson, Glenn Middleton, Michael O’Halloran and Chris Kane came into the team to replace Zander Clark, Shaun Rooney, Scott Tanser, Liam Craig, David Wotherspoon, Stevie May and Guy Melamed. Hibs also progressed to the semi-finals of the Scottish Cup last weekend as they defeated Motherwell 4-2 on penalties after the match at Easter Road had finished 2-2 after extra time. Head Coach Jack Ross made two changes to his team for this afternoon’s Scottish Premiership match as Ofir Marciano and Drey Wright came into the starting eleven to replace Matt Macey and Kevin Nisbet.

Craig Bryson got the match underway but it was the home side who got the first sight of goal on 4 minutes after they were awarded a free kick following a foul on former Saints player Drey Wright by Bryson. Joe Newell took the free kick and his delivery into the box was met by Christian Doidge but the header from the Hibs forward was tame as Elliott Parish gathered the ball.

Hibs started the match the brighter of the two sides but Saints did well to soak up the early pressure and on 20 minutes they created their first chance of the match. A good long ball forward by Jamie McCart was picked up Michael O’Halloran, who used his pace to get away from his man and gather the ball on the byline. O’Halloran then cut the ball back to Chris Kane but the strike from the Saints forward was blocked by Paul Hanlon as it went behind for a corner. Glenn Middleton took the corner from the left but his low delivery was cleared by Alex Gogic.

Good pressing play by Saints was causing the hosts problems and 2 minutes later Saints took the lead. A Bryson pass down the right played in O’Halloran and it looked like Ryan Porteous had dealt with the danger for Hibs however, excellent pressing play by O’Halloran saw the clearance from the defender played straight to Middleton who took a touch before despatching the ball past Ofir Marciano. 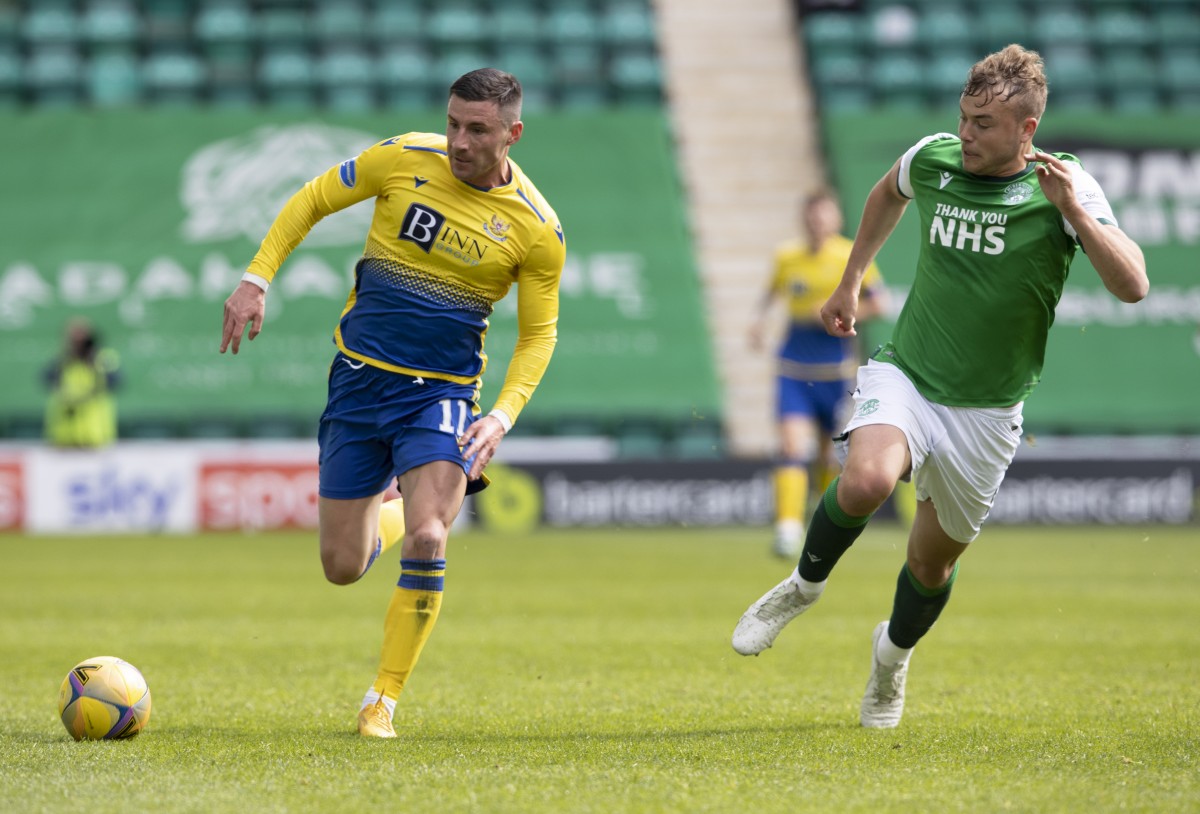 PHOTO: Michael O’Halloran breaks away from Ryan Porteous in the build-up to the goal

Hibs were struggling to deal with the pace of O’Halloran and Middleton. On 33 minutes O’Halloran won possession in midfield from Newell before sending the ball forward to Kane who played in Middleton but his strike took a deflection off Porteous as Marciano gathered.

With 10 minutes of the first half remaining Jackson Irvine crossed the ball into the Saints box from the right which picked out Martin Boyle at the back post but Parish made an excellent reaction save to save the midfielder’s volley.

Then just before half time Hibs were awarded a free kick in a promising position after Callum Booth had fouled Paul McGinn. Newell took the free kick but his delivery was poor as Ali McCann cleared the danger. 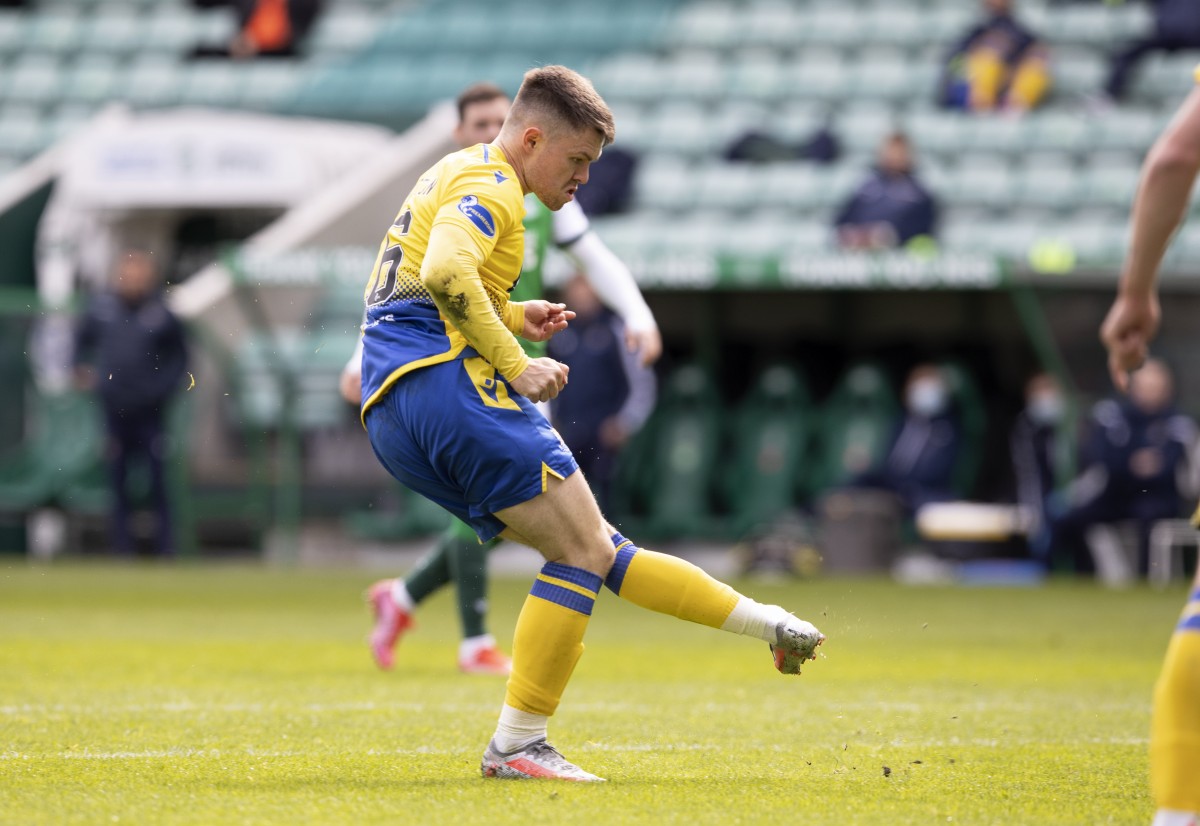 PHOTO: Glenn Middleton scores the only goal of the game

On 48 minutes Newell played in Boyle as he broke into the Saints box but his strike was blocked by Liam Gordon as the ball went behind for a corner.

Hibs were out the traps early in the second half and on 53 minutes a Boyle corner from the left was headed down by Paul Hanlon to Gogic but the overhead kick from the former Hamilton Accies midfielder didn’t trouble Parish as it went over.

A slack ball by Newell on 70 minutes was picked up by O’Halloran who then used his pace to break forward before being stopped in his tracks by Paul McGinn, as Saints were awarded a free kick. Middleton stood over the free kick however, his powerful effort didn’t trouble Marciano as it went high into the stand. Then shortly after Saints made their first change of the game as Middleton was replaced by Craig Conway.

The Easter Road side thought they had levelled the match on 72 minutes as Jackson Irvine played a defence-splitting pass to Boyle who slid the ball under Parish and into the net. However, play was pulled back as the Hibs midfielder was deemed to have been in an offside position when the ball was played through to him.

The hosts had now upped the pressure and with 15 minutes remaining Doidge put his header over.

That prompted some movement on the Saints bench as Callum Davidson introduced Stevie May, David Wotherspoon, Shaun Rooney and Murray Davidson, who was making his return from injury, into the action. 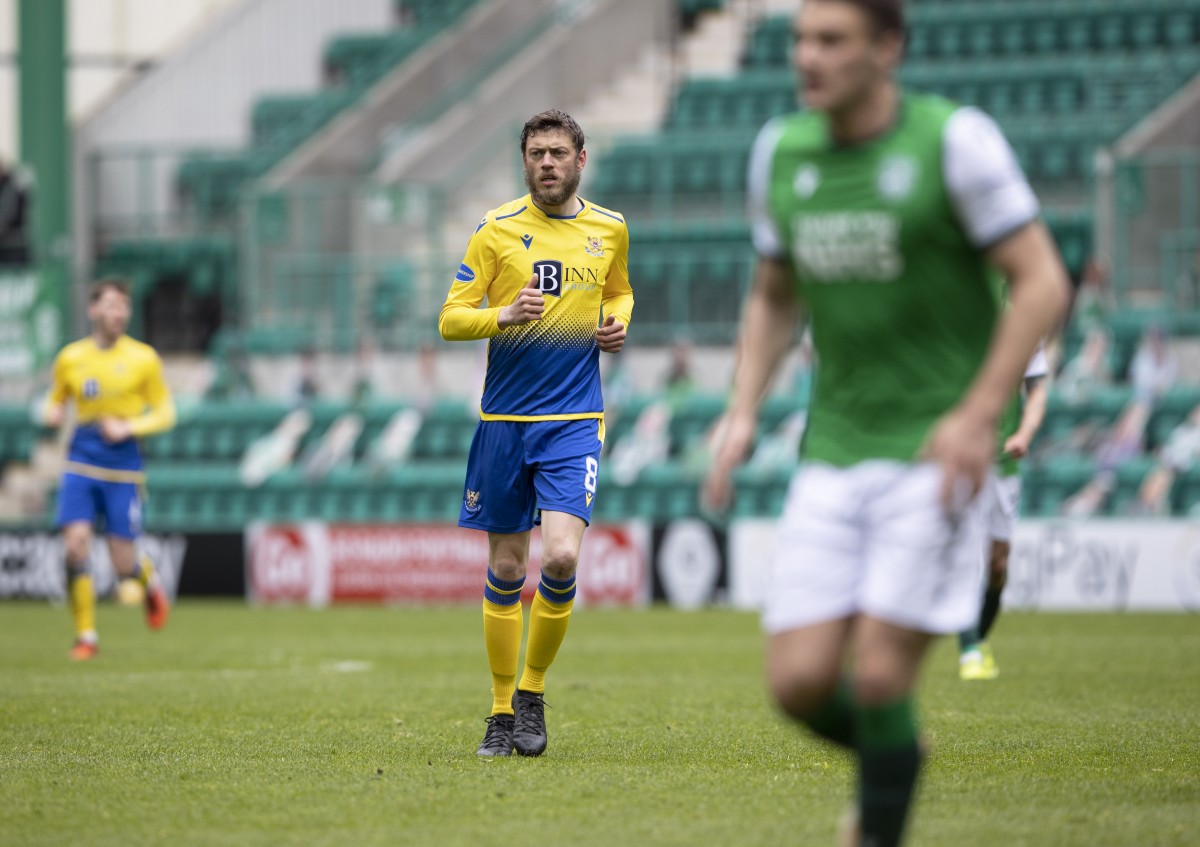 PHOTO: Murray Davidson made a welcome return from injury this afternoon as a second half substitute

On 88 minutes Boyle went on another good run down the left before sending an inviting ball across the Saints box however, there was no takers. Paul McGinn then picked up the loose ball out wide on the right and sent another ball into the box but it was headed clear by Gordon before McCann broke play up by winning Saints a free kick.

Despite being much-changed Saints were looking well prepared as they looked to see the game out and they almost got a second goal deep into stoppage time. Rooney broke down the right before whipping a cross into the Hibs box which Wotherspoon was inches away from making a connection with.