After a goalless first half Hibs were handed a chance to break the deadlock just after the hour mark when they were awarded a penalty after Martin Boyle’s strike had hit Jamie McCart from close range and the Saints defender was judged to have handled in the ball by referee John Beaton. It looked a harsh decision however, McCart was booked for the incident and Boyle convert from the spot despite Zander Clark getting a hand to the effort.

Saints were then reduced to ten men with 15 minutes remaining as McCart was shown a second yellow card for sarcastic clap towards the East Stand assistant.

Saints pushed late on for an equaliser however, Hibs saw the game out to ensure that the points stayed in Leith.

Next up for Saints is a home game against Dundee next Saturday, kick off 3pm.

After progressing to the semi-finals of the Premier Sports Cup on Wednesday evening thanks to a 2-0 win at Dundee, Saints returned to league action this afternoon as they took on Hibernian at Easter Road. This afternoon’s game was Saints third away game in a week and Callum Davidson made two changes from the team which started in midweek as Michael O’Halloran and Hayden Muller came in to replace Glenn Middleton, who dropped to the bench, and James Brown who missed out after picking up an injury against Dundee. Today’s game was also special for captain Liam Craig as he equalled Steven Anderson’s all-time appearance record of 441 appearances. Hibs also progressed to the Premier Sports Cup semi-finals in midweek as they defeated Dundee United 3-1 at Tannadice and Head Coach Jack Ross also made two changes to his starting eleven. Jake Doyle-Hayes and Lewis Stevenson both dropped to the bench and they were replaced by Josh Doig and Chris Cadden.

Liam Craig got the match underway for Saints but it was the hosts who created the first chance of the match after 5 minutes. The Leith side were awarded a free kick after Scott Allan was fouled by Craig. The free kick was taken by Joe Newell and his delivery from the left was headed down by Paul Hanlon to Josh Doig but Zander Clark made a good save to deny the Hibs defender as he turned the ball behind for a corner.

Hibs were then claiming for a penalty on 12 minutes as Kevin Nisbet went down in the box under the challenge from Clark but John Beaton waved play on, satisfied that Clark had got a touch to the ball.

It was a strong start by the hosts and on 16 minutes space opened up for Kyle Magennis as he broke forward and the midfielder unleashed a strike at goal which took a deflection on its way but Clark was alert to the danger.

After weathering the early pressure Saints started to grow into the game and on 18 minutes they were awarded a free kick following a foul on Hayden Muller by Nisbet. Craig played the free kick low to Chris Kane and the Saints number nine saw his effort from a tight angle turned behind for a corner by Matt Macey. Then shortly after a deflected Shaun Rooney cross from the right looked like it was going to catch out the Hibs keeper at his near post however, it struck the outside of the post before going behind for a corner.

It was proving to be a good spell for Saints and on 23 minutes good play by Kane forced Ryan Porteous to concede another corner however, Craig’s delivery from the right was well gathered by Macey.

The home fans were starting to get a bit restless and 2 minutes later Paul McGinn’s foul on Kane saw Saints awarded a free kick in a promising position. Craig delivered the free kick into the box and it broke to Jamie McCart who headed the ball back to Rooney but the volley from the wing-back was too high. Then shortly after Michael O’Halloran broke forward before unleashing an effort from about 20 yards which was saved by Macey. 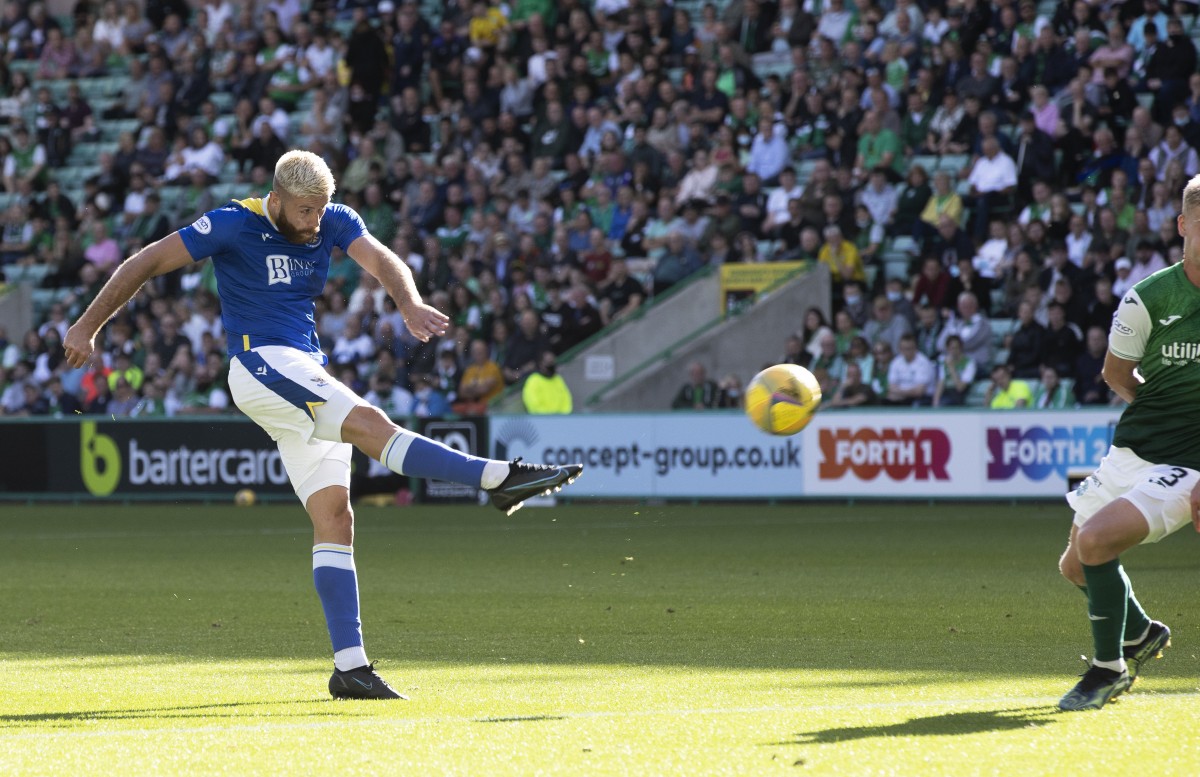 Despite Saints enjoying a good spell, the Easter Road side were still a threat and just after the half an hour mark good play by Martin Boyle saw him beat Efe Ambrose to the ball however, his shot on the turn was comfortably gathered by Clark.

The first booking of the game came with four minutes of the first half remaining as Ryan Porteous was shown a yellow card for dragging back Kane.

The final chance of the half fell to the home side as an Allan corner from the right was met by Hanlon but the Hibs captain couldn’t direct his header on target.

Before the second half could get underway Hibs made a change as Jake Doyle-Hayes came on to replace Kyle Magennis.

On 56 minutes a good move by Saints saw Ali Crawford slip in Rooney and the wing-back broke forward and into the box however, he was unable to get his effort on target.

Then as the game approached the hour mark Hibs were awarded a penalty. Newell cut the ball back from the by-line to Boyle and the forward saw his first time shot hit McCart from close range and Beaton pointed to the spot. The decision looked a harsh one. Boyle took the penalty and despite Clark getting a hand to the effort he slotted the ball into the bottom left corner to give Hibs the lead. 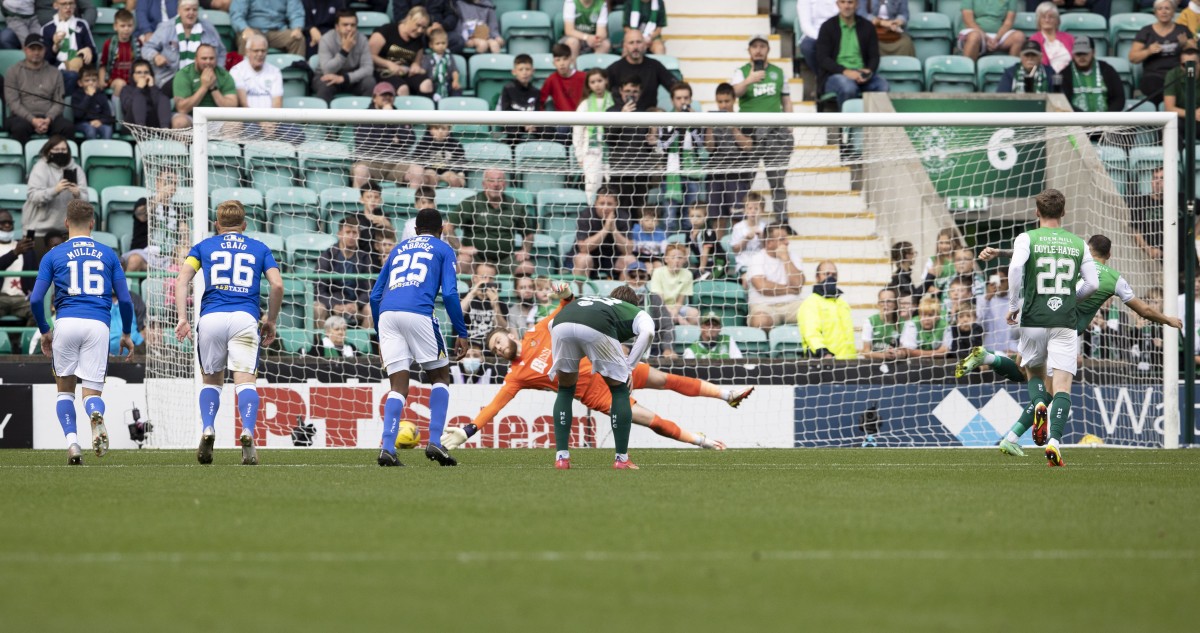 Saints made their first change of the game on 68 minutes as Glenn Middleton came on to replace Hayden Muller.

Hibs though now had their tails up and on 70 minutes Boyle got a sight of goal however, his effort from outside the box went wide. Then shortly after Nisbet put a header wide.

Saints afternoon got even worse with 15 minutes remaining as they were reduced to ten men as Jamie McCart was shown a second yellow card after sarcastically applauding the East Stand assistant referee. 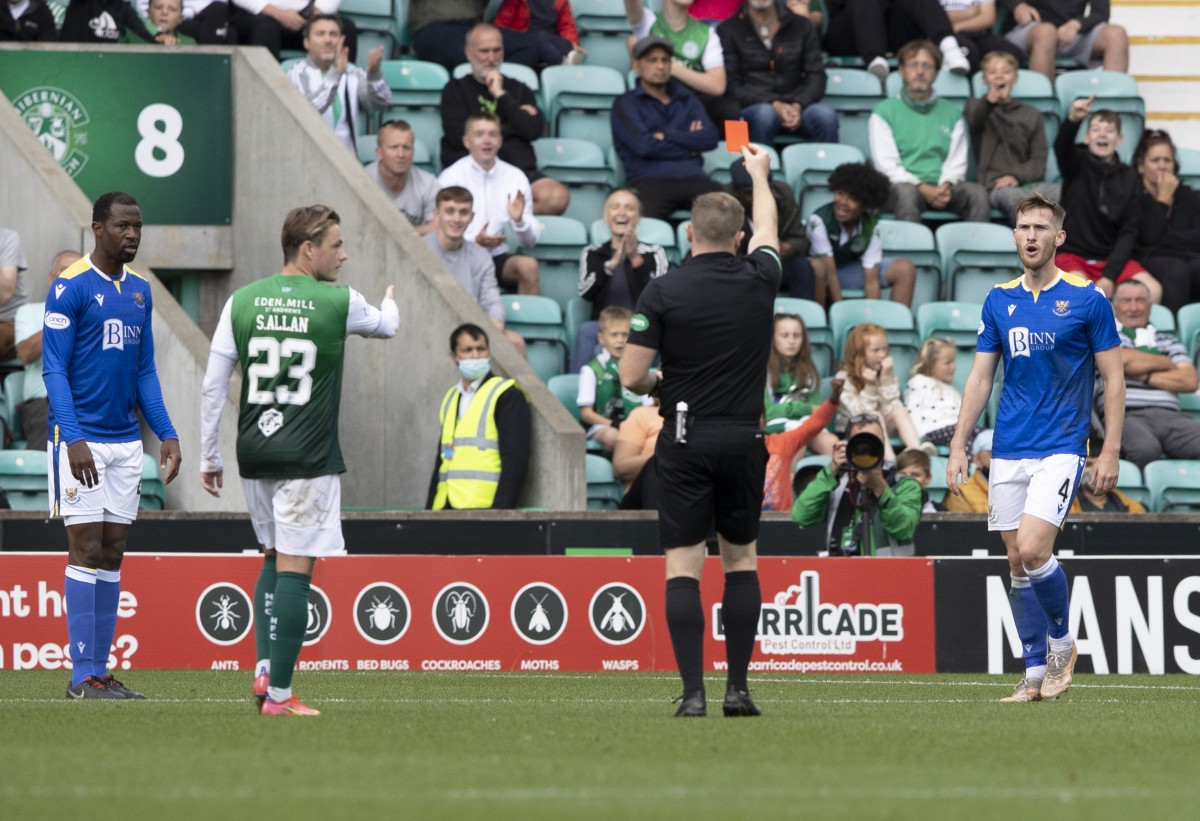 PHOTO: Jamie McCart is sent off by referee John Beaton

Hibs continued to create chances and on 77 minutes Paul Hanlon saw his header saved by Clark.

Then a minute later play switched to the other as Middleton had a strike at goal but Macey was equal to the effort.

Saints made a double change with 10 minutes remaining as Charlie Gilmour and Stevie May came on to replace Liam Craig and Chris Kane as they looked to try and get something out of the game.

Hibs came close to a second goal on 83 minutes but Clark ensured Saints remained in the game as he tipped over a lobbed effort from Allan.

Despite having a mountain to climb Saints continued to push for an equaliser in the closing stages however, they couldn’t create any clear-cut chances to test Macey as Hibs saw the game out to secure their first home win against Saints since 2012.