Saints ended their league campaign this lunchtime with a 4-0 defeat to Hibs at Easter Road.

The hosts took the lead just before half time when Paul McGinn got on the end of Elias Melkersen’s ball into the box.

Then in the second half James Scott netted a hat-trick to ensure that the points remained in Leith. The forward scored his first goal 3 minutes in the second half as he got on the end of a McGinn cross. Scott’s second goal arrived on 61 minutes as he converted a Joe Newell cross before the on-loan Hull City man completed his hat-trick 2 minutes from the end as he headed past Elliott Parish.

Saints end their league campaign in eleventh place in the cinch Premiership with 35 points. Their attention will now turn to Friday’s cinch Premiership play-off first leg match against Inverness CT at the Caledonian Stadium, kick off 7:45pm.

For their final league game of the season Saints made the trip to the capital to take on Hibs at Easter Road this lunchtime. Following Wednesday’s 1-0 win against Aberdeen which confirmed that Saints avoided automatic relegation and will now face Inverness CT in the play-offs, Callum Davidson made six changes to his starting eleven today. Elliott Parish, Charlie Gilmour, John Mahon, who was making his first start for the club, Cammy MacPherson, Nadir Çiftçi and Tom Sang came in to replace Zander Clark, Murray Davidson, Liam Gordon, Melker Hallberg, Callum Hendry and James Brown. Hibs lost 3-1 at Dundee on Tuesday evening and Caretaker Manager David Gray made two changes to the side which started in The City of Discovery as Darren McGregor and Elias Melkersen came in to replace Rocky Bushiri and Josh Campbell who both dropped to the bench.

Ewan Henderson got the match underway for the hosts and 2 minutes into the match Saints were awarded a free kick just outside the box following a foul on Glenn Middleton by Lewis Stevenson. Cammy MacPherson took the free kick but his effort hit the Hibs wall as the Easter Road side cleared the danger.

Saints got another sight off goal on 7 minutes as Ryan Porteous tried to play the ball out wide to the right but it was intercepted by Nadir Çiftçi who drove forward before seeing his right-footed strike deflected behind for a corner. It was a positive start by Saints and a minute later Jacob Butterfield had a go from distance but it was a comfortable save for Matt Macey. 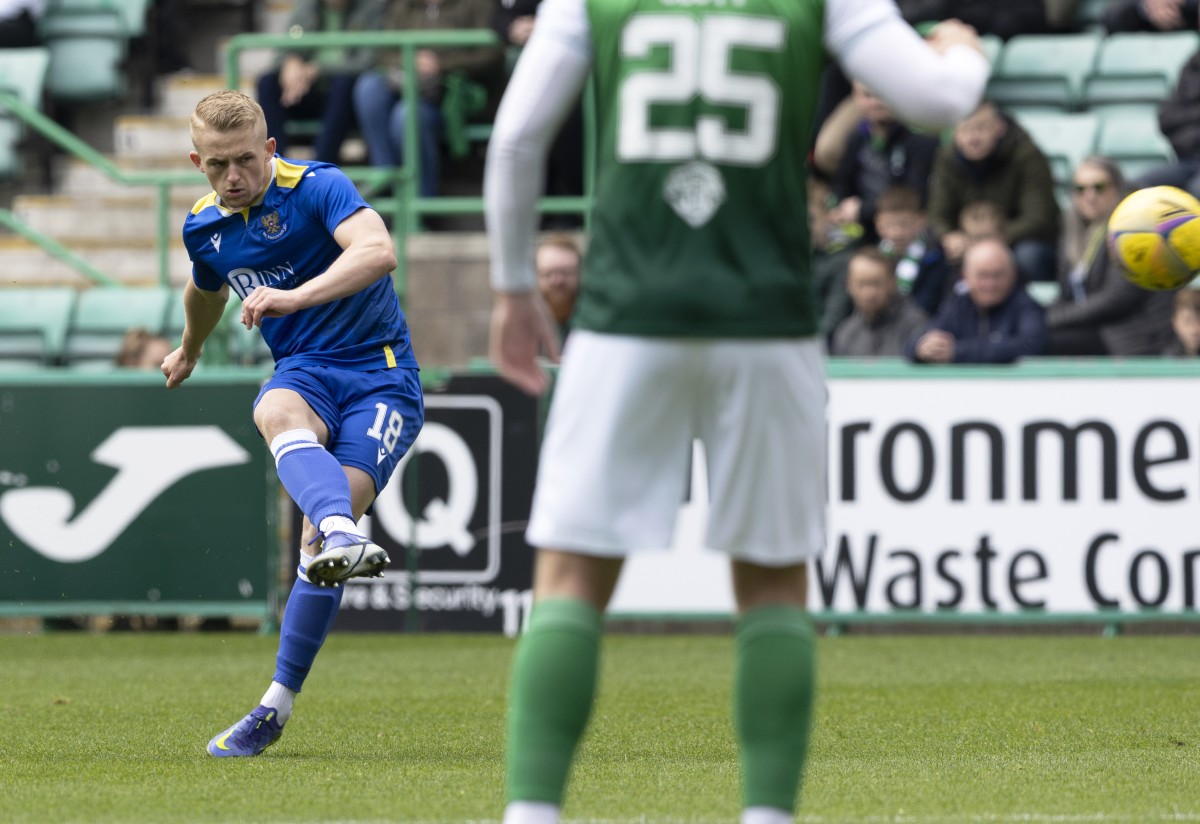 Hibs got their first corner of the game on 10 minutes as Henderson delivered a deep ball in from the right, picking out Darren McGregor but Elliott Parish comfortably gathered the looping header from the defender.

Saints continued to apply pressure on the Hibs goal and on 16 minutes Macey was called into action again this time saving a Middleton shot from distance. Then 3 minutes later from a short corner MacPherson played a neat one-two with Butterfield as MacPherson carried the ball across the edge of the area before seeing his strike turned behind for another corner by McGregor.

Hibs almost broke the deadlock on 26 minutes as Joe Newell’s cross from the right was met by Josh Doig but his header went narrowly wide of Parish’s left-hand post.

With 4 minutes of the first half remaining Saints hit Hibs on the counter attack from a corner as Shaun Rooney charged forward however, he was stopped in his tracks on the edge of the box by Lewis Stevenson.

The breakthrough came in the final minute of the first half as Hibs took the lead. Saints couldn’t clear a Newell corner and Elias Melkersen sent the ball back into the danger area and Paul McGinn got on the end of it as he turned and hooked the ball over his shoulder and into the net. The Saints players were not happy that the goal stood as they felt play should have been stopped as Jamie McCart was down with a head knock. 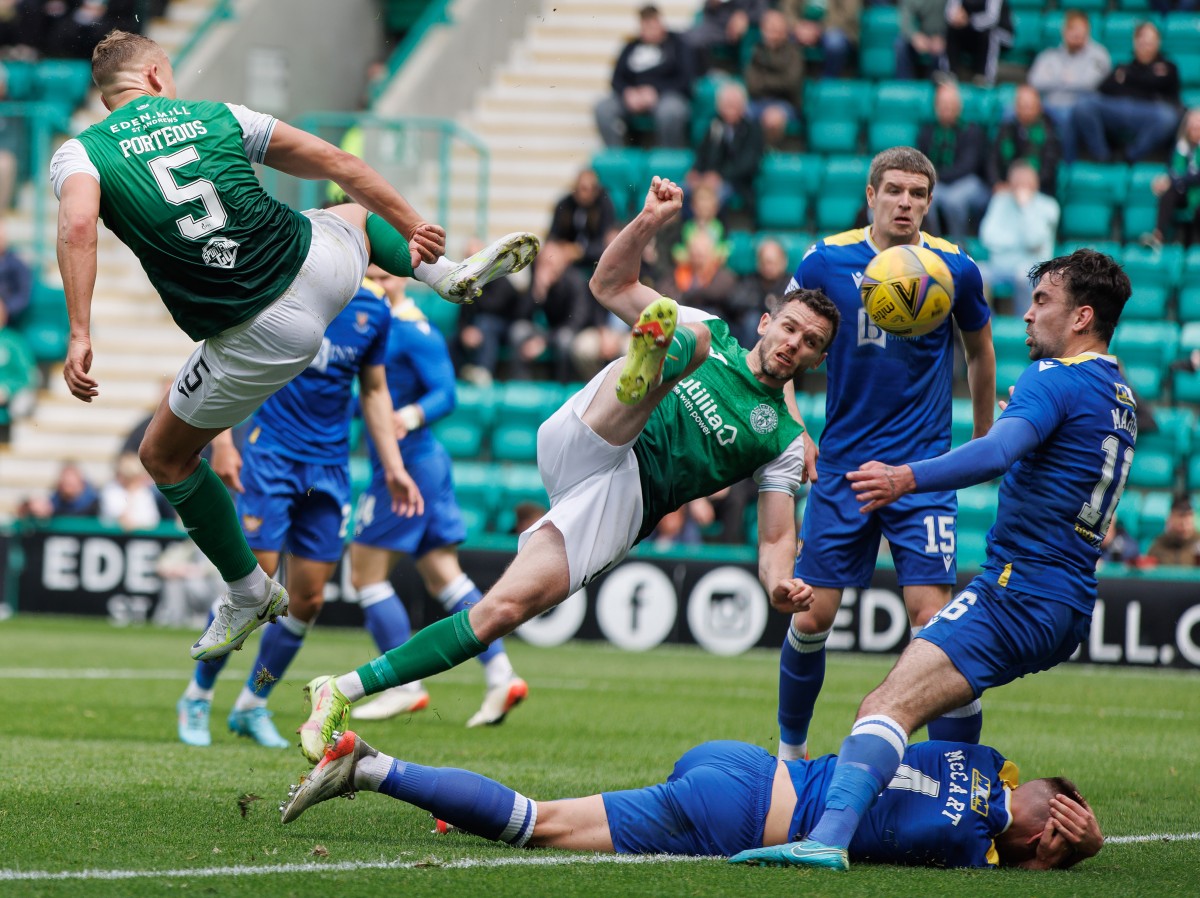 PHOTO: Paul McGinn gives Hibs the lead as Jamie McCart is on the ground with head knock

Hibs doubled their lead 3 minutes into the second half as McGinn’s cross into the box from right hit off James Scott to take the ball past Parish.

The first booking of the game came on 54 minutes as McGregor ended up in the referee’s book for a foul on Çiftçi. Middleton took the free kick but his effort didn’t trouble Macey.

Rooney was then booked for a foul on Porteous before on 57 minutes Scott played the ball into the path of Doig but he curled his effort narrowly wide.

Saints then made their first change of the game as Michael O’Halloran came on to replace John Mahon. 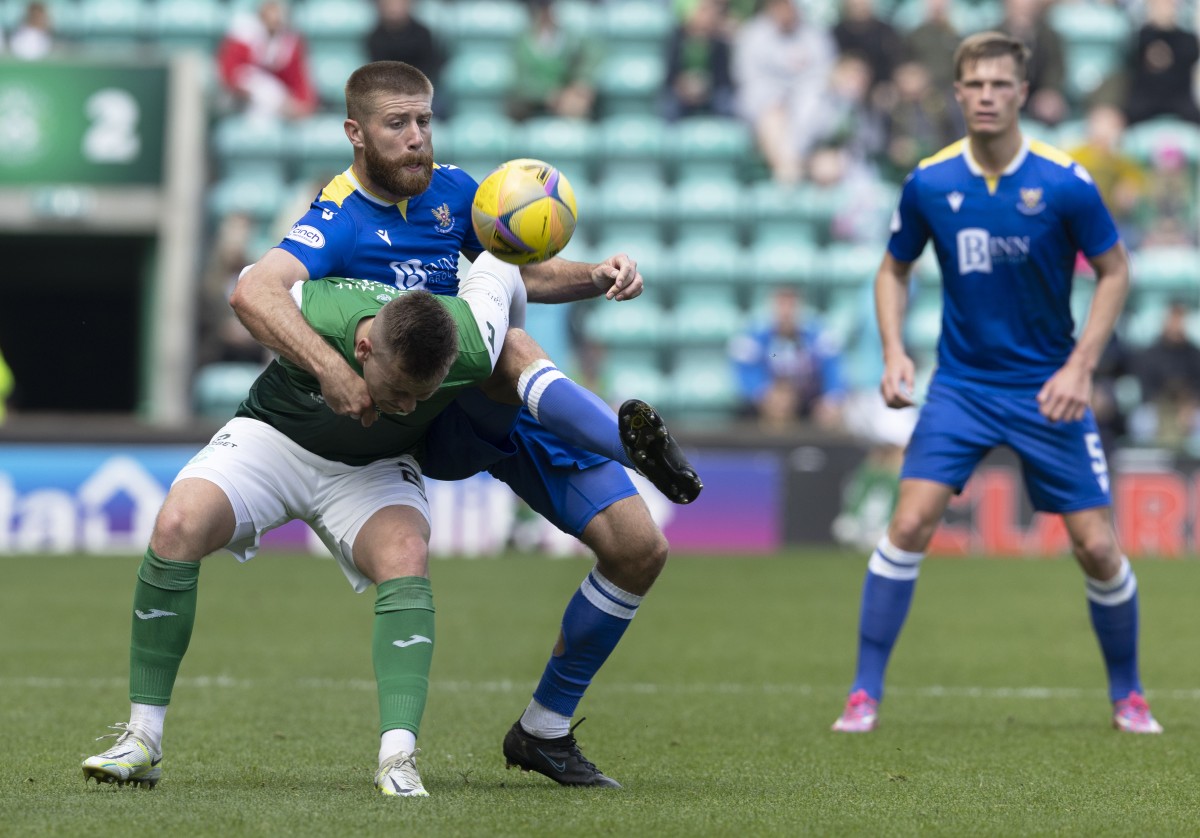 Charlie Gilmour was next in the book for bringing down Stevenson before Hibs got a third goal just after the hour mark. Newell’s low delivery from the right fell nicely to Scott who slotted home in the six yard box for his second goal of the afternoon.

On 68 minutes Butterfield saw his long-range effort turned behind for a corner by McGregor. Then play switched to the other end as Hibs were presented with a great chance to extend their lead. Scott saw his effort saved by Parish and the loose ball broke to Elias Melkersen who somehow put his effort wide with the goal at his mercy.

Callum Davidson made a double change on 76 minutes as Liam Gordon and Liam Craig came on to replace Shaun Rooney and Jacob Butterfield.

Great play 2 minutes later great play by Middleton saw him play a neat one-two with MacPherson as he broke into the box but Macey did well to save at the feet of the attacker. Then shortly after Gilmour had a go from distance but he slipped as he unleashed his effort which took the power out of the strike as Macey comfortably gathered. 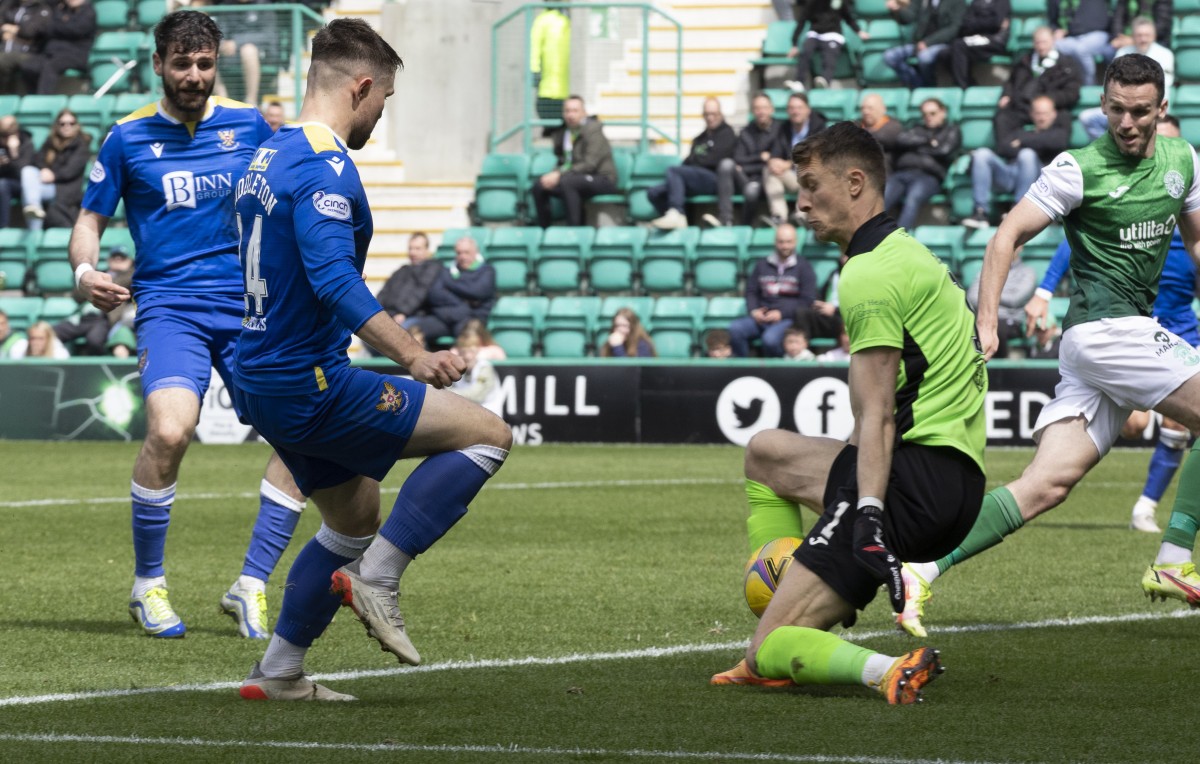 With 2 minutes of the ninety remaining Scott completed his hat-trick as he got on the end of a Doig cross to head the ball back across goal and into the far corner of the net.