Inverness CT came from behind to hold Saints to a 2-2 draw at the Caledonian Stadium in the first leg of the cinch Premiership Play-Off Final this evening.

The first half was a one-sided affair as Saints dominated proceedings and they were two goals up by half time. Shaun Rooney bulleted home a Melker Hallberg cross on 18 minutes and then shortly after Hallberg scrambled the ball over the line from close range following a stramash in the Inverness box.

However, Caley Thistle pulled it back in the second half courtesy of a double from Reece McAlear. The on-loan Norwich City midfielder got on the end of an Austin Samuels cross on 73 minutes and he then lashed home a stunning 25-yard free kick into the top corner with 10 minutes remaining to setup an interesting second leg.

All roads headed to Inverness this evening as Saints took on Inverness Caledonian Thistle in the first leg of the cinch Premiership Play-Off Final at the Caledonian Stadium to decide who would play in next seasons cinch Premiership. Callum Davidson made six changes to the team which started the 4-0 defeat at Hibs on Sunday. Zander Clark, James Brown, Liam Gordon, Murray Davidson, Callum Hendry and Melker Hallberg came in to replace Elliott Parish, Tom Sang, John Mahon, Charlie Gilmour, Jacob Butterfield and Nadir Çiftçi. Inverness CT progressed to the final last Friday evening after they defeated Arbroath 5-3 on penalties following a 0-0 draw at Gayfield. Going into tonight’s game Head Coach Billy Dodds made four changes to his starting eleven as Cameron Harper, Billy Mckay, Joe Hardy and Lewis Hyde came in to replace Shane Sutherland, Logan Chalmers, Austin Samuels and Danny Devine, who was suspended after getting sent off at Gayfield last Friday evening.

The hosts got the match underway and it was Saints who created the first chance of the match on 5 minutes. Shaun Rooney played the ball into the feet of Glenn Middleton who dribbled along the edge of the box before unleashing a fine left footed strike but Mark Ridgers was able to get across his goal and tip the ball over for a corner. Melker Hallberg took the corner from the left and he played it short to Cammy MacPherson who returned it to the big Swedish midfielder but his strike was comfortably gathered by Ridgers.

It was a good start by Saints and 5 minutes later the ball broke to Murray Davidson on the edge of the area but he dragged his effort wide. The pressure on the Caley Thistle goal continued and on 16 minutes Cammy MacPherson played in Shaun Rooney but his low effort was gathered by Ridgers.

The Saints pressure eventually told as they took the lead on 18 minutes. Good play down the left saw Hallberg cross the ball from the byline as Rooney rose above Cameron Harper like a salmon out of the River Tay to nod home at the back post. 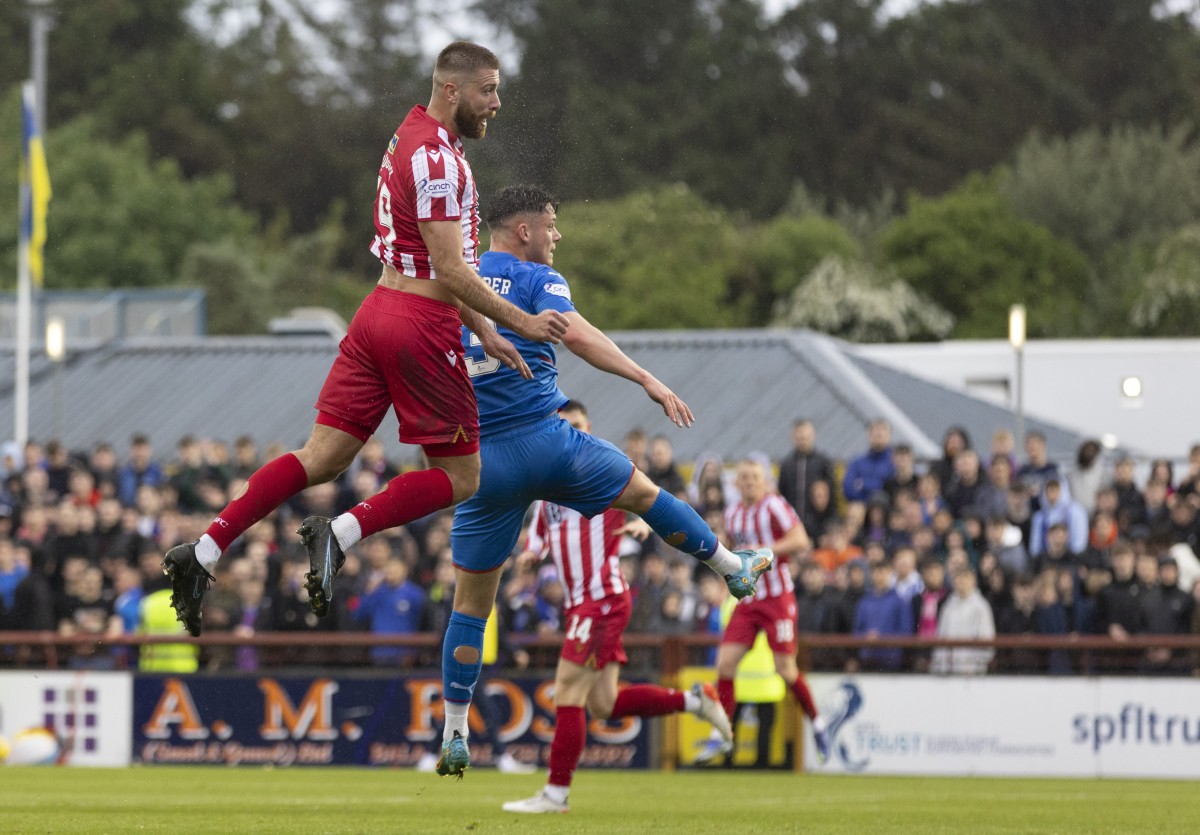 Then 2 minutes later Saints almost doubled their lead as the ball broke to Middleton but his strike went narrowly over.

Saints though did get a second goal their play deserved on 24 minutes. Callum Hendry broke into the Caley Thistle box and switched the ball onto his left foot before seeing his strike saved by Ridgers. There was then a scramble in the box before Hallberg squeezed the ball over the line from close range at the second attempt.

Saints were firmly in control of proceedings and just after the half an hour mark they created another chance as Davidson hooked a first-time attempt narrowly wide. 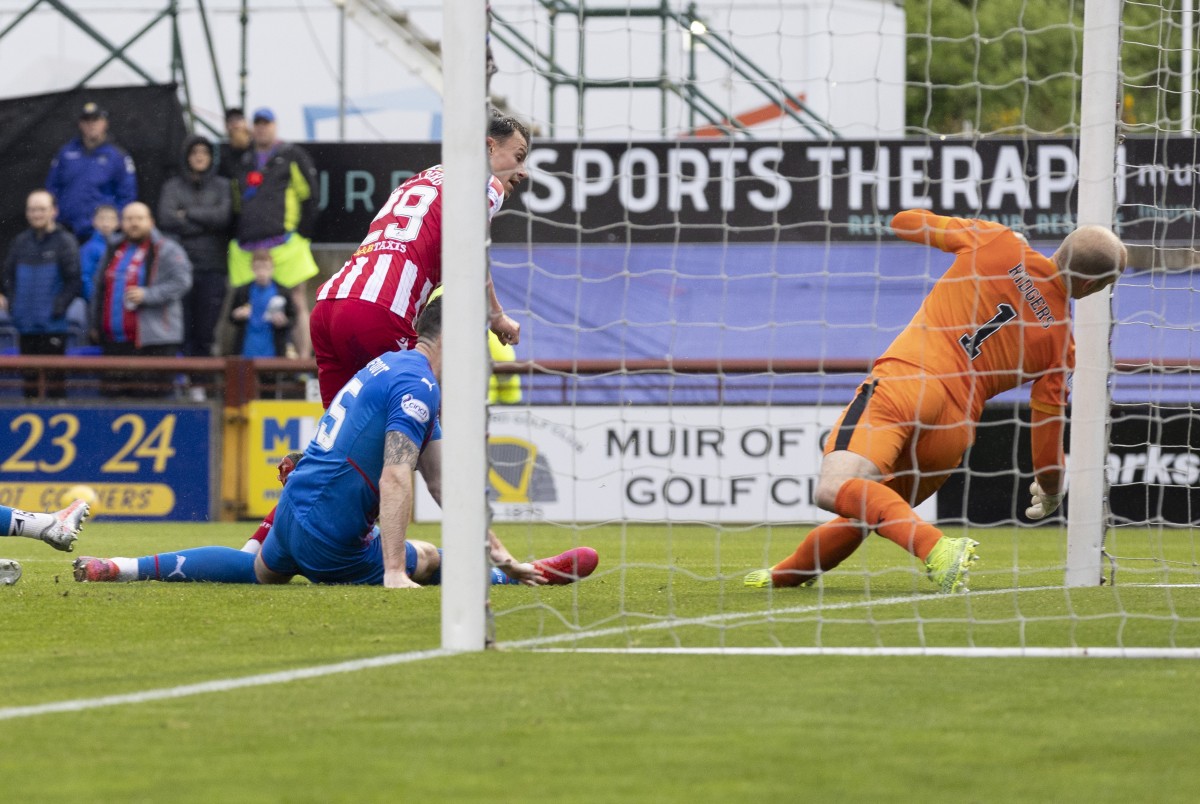 PHOTO: Melker Hallberg scrambles the ball over the line to double Saints lead

Caley Thistle made a double change at half time as Aaron Doran and Joe Hardy remained in the changing room and they were replaced by Logan Chalmers and Austin Samuels.

Saints were out of the traps quickly at the start of the second half as they got an early corner which was taken by Hallberg from the right and his delivery was met by Dan Cleary but he couldn’t direct his header on target.

Another good Saints move on 48 minutes saw James Brown play in Hendry who saw his strike saved by Ridgers at his near post as the Caley Thistle number one tipped the ball over for a corner at the second attempt after he had fumbled his first save. Saints were creating all the chances in the opening exchanges of the second half and on 53 minutes Brown’s cross from the left was met by Cleary but his downward header went the wrong side of the post.

The hosts then made another change on 56 minutes as Scott Allardice came on to replace Lewis Hyde. 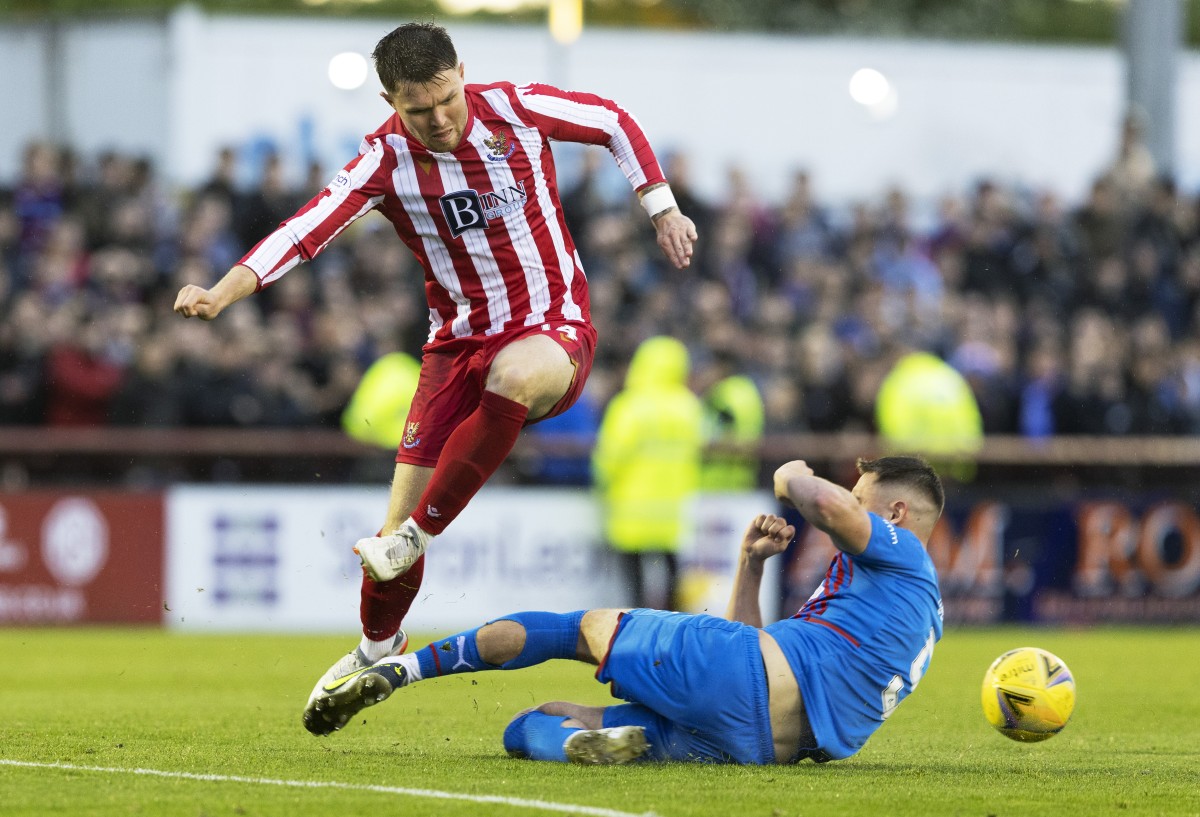 Saints continued to look dangerous going forward and on 64 minutes Middleton cut in from the right but his low strike went wide of Ridgers’ right hand post.

A rare foray into the Saints box by Inverness CT on 67 minutes saw a Reece McAlear corner from the right break to Sean Welsh but the Caley Thistle captain hooked his effort over.

Callum Davidson then made a double change for Saints on 69 minutes as Glenn Middleton and Melker Hallberg were taken off and they were replaced by Stevie May and Jacob Butterfield.

4 minutes after that change the Caley Jags pulled a goal back as McAlear sent his strike high into the net after he had got on the end of a Samuels cross from the right. Saints were not happy about the goal as they felt play should have been stopped in the build-up as Jamie McCart was down with a head knock and it looked like Samuels was in an offside position when he received the ball out on the right.

The hosts now had their tails up and they levelled the match with 10 minutes remaining. The Highlanders were awarded a free kick after Davidson had fouled McAlear. The on-loan Norwich City midfielder took the free kick himself and he curled a brilliant 25-yard strike into the top corner of the net to spark wild celebrations amongst the home support. 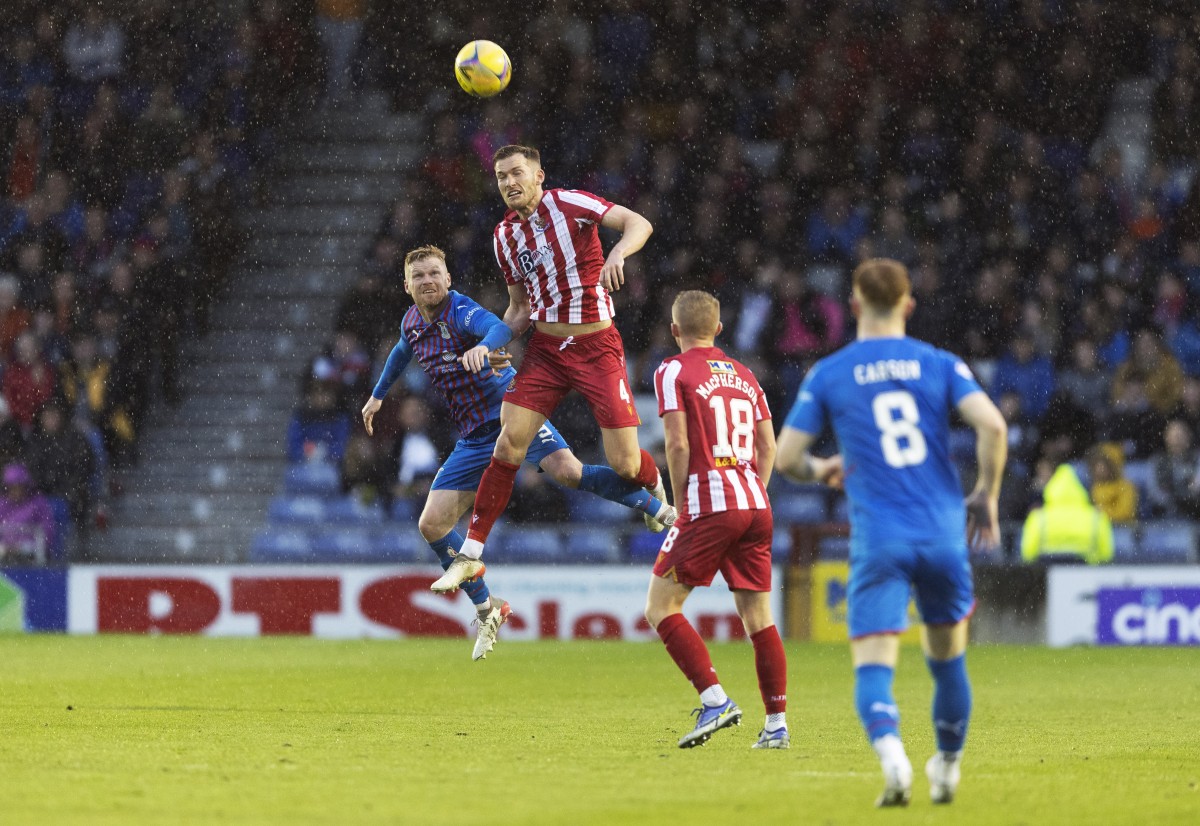 Saints had dominated the majority of the match and had looked like going into the second leg with the lead but then out of nowhere Cally almost won it on 86 minutes. Samuels used his pace to cut in from the right and he picked out Billy Mckay in the box but Saints captain Liam Gordon made a crucial block as he turned the ball behind for a corner to ensure the match finished level.

Attention now turns to Monday’s crucial second leg in Perth as Saints will be hoping they can get the win to retain their cinch Premiership status.

Picture: Dan Cleary gets away from Cameron Harper