A last minute equaliser from Jack Fitzwater meant that Saints had to settle for a point at Livingston this afternoon.

Saints took the lead on 76 minutes when Glenn Middleton headed home a deep cross from James Brown. However, it was cancelled out in the final minute of the match as Fitzwater converted at the back post after Scott Pittman had been denied by a fantastic fingertip save from Zander Clark.

Saints could have won it during the 5 minutes of additional time as Hendry broke clear but his strike was straight at Ivan Konovalov in the Livi goal.

Saints are now six points clear of bottom club Dundee, who lost 2-0 at St Mirren today, and have a seven-goal advantage with two league games remaining.

Next up for Saints is their final home league game of the season when they welcome Aberdeen to Perth on Wednesday evening, kick off 7:45pm.

West Lothian was the destination for Saints this afternoon as they headed to the Tony Macaroni Arena for a cinch Premiership match against Livingston. Saints lost 1-0 to St Mirren last weekend and Callum Davidson made three changes to his starting eleven this afternoon. Tom Sang, Nadir Çiftçi and Ali Crawford all dropped to the bench and they were replaced by Dan Cleary, Stevie May and Cammy MacPherson. Livingston defeated Hibs 1-0 last Saturday thanks to a second half Scott Pittman strike and manager David Martindale decided to go with the same team which started at the Tony Macaroni Arena a week ago.

Murray Davidson got the match underway for Saints and it was the Perth side who created the first chance of the match after 20 seconds. Stevie May played the ball out wide to Melker Hallberg and the cross from the Swedish midfielder was met by Callum Hendry but his first time right footed effort from 8 yards went narrowly over.

It was a quick start to the match and a minute later Livi got their first sight of goal as Andrew Shinnie played the ball into the feet of Joel Nouble but the forward dragged his effort wide.

Then on 4 minutes Scott Pittman saw his strike blocked and May picked up the ball in his own half and broke forward as Saints hit the hosts on the counter attack. The Saints forward got to the edge of the Livi box and moved the ball onto this right foot but Ivan Konovalov comfortably saved the low strike. 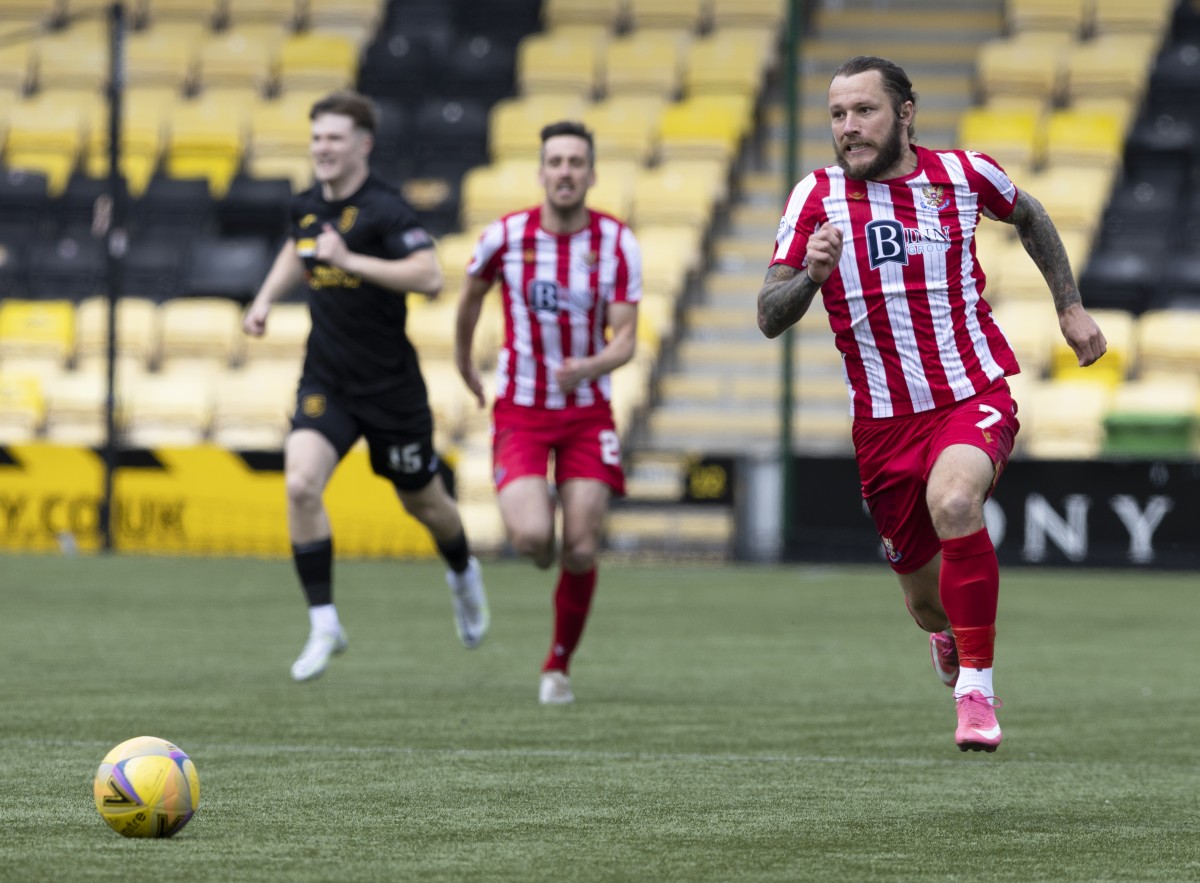 PHOTO: Stevie May hits Livingston on the break only to see his shot saved by Ivan Konovalov

The first booking of the game came on 14 minutes as Andrew Shinnie was shown a yellow card for a foul on Dan Cleary.

Just after the half an hour mark a long throw into the box by Shaun Rooney was flicked on by Cleary which caused panic for the Livi defence as Konovalov couldn’t make a clean connection to punch the ball away but the danger was eventually cleared by a Livi defender.

The pace of the game increased again as play switched to the other end as Nouble switched the ball to Nicky Devlin on the right and he picked out Odin Bailey in the box but his strike was deflected behind for a corner by Jamie McCart. Sean Kelly took the corner from the right but Zander Clark punched the ball clear.

On 35 minutes May, whose darting runs across the backline during the first half was causing problems for the Livingston defence, was claiming for a penalty as he went down in the box after he clashed with Ayo Obileye as both players chased down a ball into the box but the appeals were dismissed by William Collum.

Then a minute later Nouble went on a powerful run as he carried the ball 50 yards up the park before squaring it to Shinnie but his strike didn’t trouble Clark.

Saints would end the half the stronger of the two sides and on 37 minutes May fired wide after he had been setup by Callum Booth. Then 4 minutes later the forward won Saints a free kick in a promising position after he had been fouled by Morgan Boyes. Hallberg took the free kick but his effort hit the Livi wall. 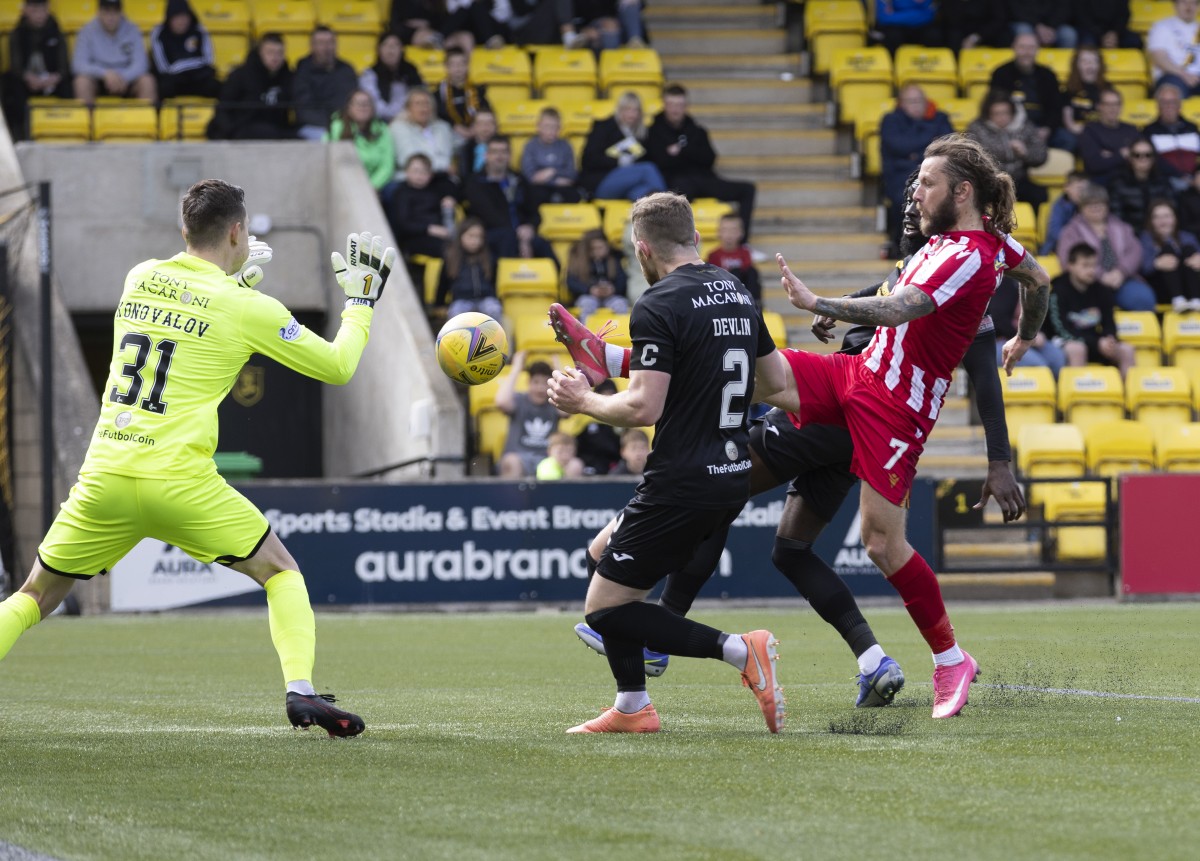 PHOTO: Stevie May is denied by Ivan Konovalov

Saints were awarded another free kick out wide on the right on 43 minutes following a handball by Shinnie. Booth took the free kick this time but his delivery into the box was comfortably gathered by Konovalov.

The hosts were given a great chance to take the lead on 56 minutes as Obileye sent the ball over the top which caught out the Saints rearguard and played in Bailey who was one-on-one with Clark but the Saints number one made a fantastic save with his feet to deny the midfielder.

Saints made their first change of the game 2 minutes later as James Brown came on to replace Callum Booth.

On 63 minutes May played in Hendry however, the strike from the Saints forward lacked power as Konovalov got down well to gather the effort at his near post.

Livingston then made their first change of the game a minute later as Odin Bailey made way for Alan Forrest and it wasn’t long until the attacking midfielder was involved in the action as on 66 minutes he cut in from the left and flashed a strike inches wide.

On 69 minutes Saints made another change as Stevie May was replaced by Glenn Middleton who would go on to make a big impact as he gave Saints the lead on 76 minutes. A deep cross from the left by Brown was met by Middleton at the back post who peeled off his man to head the ball into the net.

PHOTO: Glenn Middleton heads the ball home to give Saints the lead

However, Livi levelled the match in the final minute of the ninety as Jason Holt’s cross from the right was met by Pittman at the front post but Clark produced a fine fingertip save to prevent the header from flying into the net. However, Jack Fitzwater reacted quickest to the loose ball to slot it into the net.

Incredibly Saints could have won it in the 5 minutes of additional time as Hendry got on the end of a slack pass and broke forward and into the Livi box however, he fired his effort from a tight angle straight at Konovalov when he also had the option to square it to Middleton. Then a minute later Davidson headed the ball into the path of Middleton but his strike was turned behind for a corner by Konovalov as Saints had to settle for a share of the points. 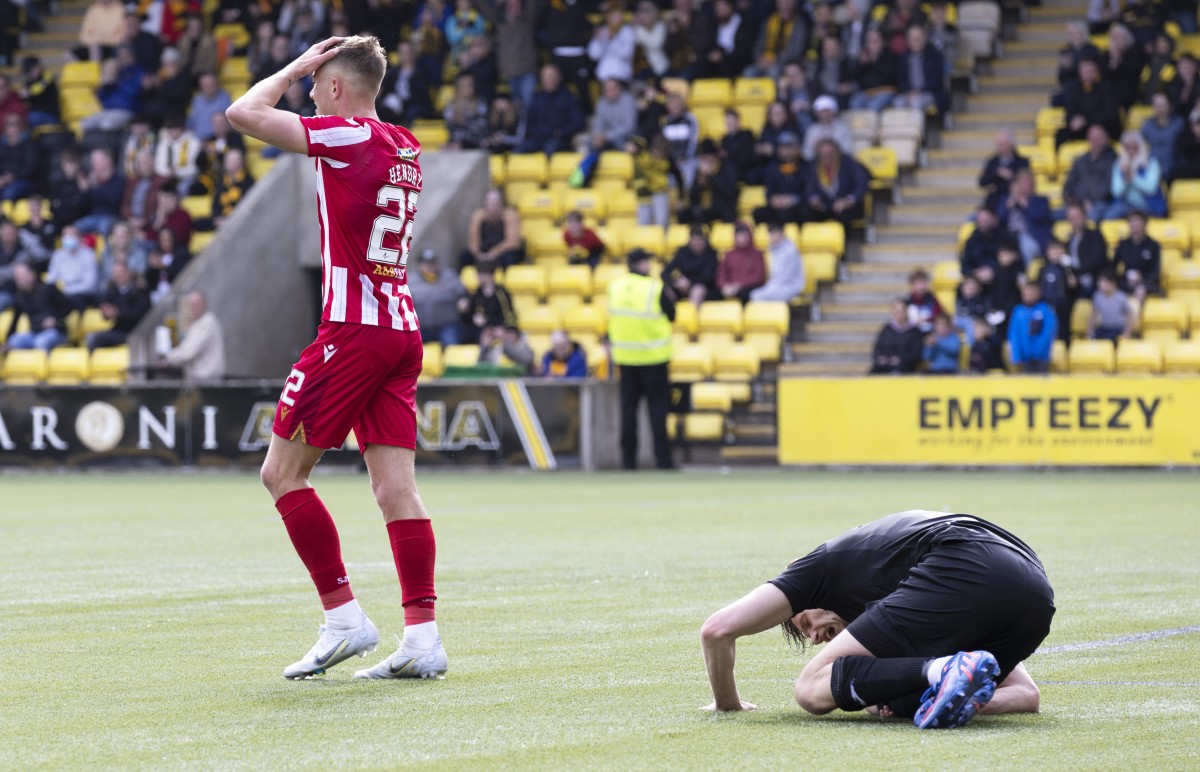 PHOTO: Callum Hendry holds his head after missing a late chance to win the game

Picture: Glenn Middleton is closed down by Jason Holt