Saints disappointing run of results continued this afternoon as they went down 2-0 to Motherwell at Fir Park.

Motherwell took the lead on 17 minutes when midfielder Dean Cornelius struck a low strike from the edge of the area into the bottom corner of the net.

The Steelmen then doubled their lead 10 minutes into the second half as Kevin van Veen weaved his way into the box before guiding a low strike through the legs of Zander Clark.

Saints remain bottom of the league and now face a big game on Wednesday evening when they welcome Ross County to McDiarmid Park, kick off 7:45pm.

Saints were back on their travels today as they headed to North Lanarkshire to take on Motherwell at Fir Park. Saints lost 2-0 at Rangers on Wednesday evening and Callum Davidson made five changes to his starting eleven for this afternoon’s cinch Premiership match. Callum Booth, Craig Bryson, Glenn Middleton, Viv Solomon-Otabor and Stevie May came in to replace Reece Devine, Jacob Butterfield, Ali Crawford, Michael O’Halloran and Eetu Vertainen. Motherwell lost 1-0 at Celtic last Sunday and manager Graham Alexander made three changes to his team as Sondre Solholm Johansen, Liam Donnelly and Dean Cornelius came in to replace Jake Carroll, Barry Maguire and Callum Slattery.

Kevin van Veen got the match underway for the hosts and the opening 15 minutes was a fairly even affair as both teams settled into the match.

The Steelmen then took the lead on 17 minutes as a Sean Goss cross into the box from the left was headed clear by Jamie McCart however, the clearance from the defender went straight to Dean Cornelius who took the ball down before firing a low strike into the bottom corner of the net.

Motherwell then almost doubled their lead on 23 minutes as Stephen O’Donnell’s long ball forward set van Veen free and he burst into the box, getting the better of Liam Gordon, before seeing his effort turned behind for a corner by James Brown. Liam Donnelly’s corner from the right was only partially cleared by the Saints defence as O’Donnell met it on the volley as his powerful effort took a deflection off the back of Callum Booth before going behind for another corner.

Saints though regrouped and went in search of a way back into the game and on 26 minutes Liam Craig’s low cross from the right took a touch off Tony Watt which directed the ball goal wards however, Motherwell keeper Liam Kelly made a good save with his feet. Then a minute later a fine cross into the box from the left by Viv Solomon-Otabor was met by Glenn Middleton but his volley went high into the stand behind the goal. 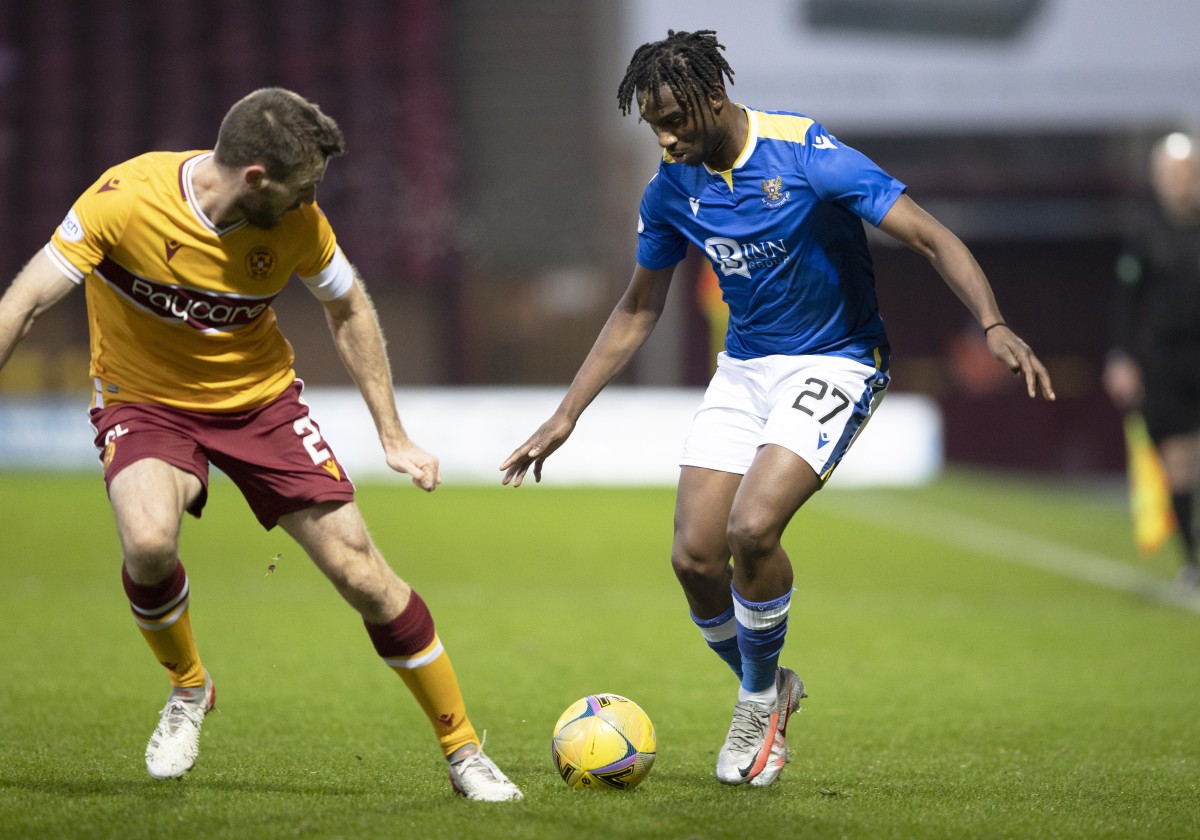 The goal had sparked life into the game and just before the half an hour mark van Veen played a neat touch to lose Liam Craig and the Dutch forward then broke forward before unleashing a strike which didn’t trouble Zander Clark.

Play then switched to the other end and on 31 minutes Booth played the ball into the feet of Solomon-Otabor who sent over a delightful cross into the box however, no one in a Saints short could get on the end of it as Nathan McGinley turned the ball behind for a corner. Craig took the corner from the right but his floated ball into the box was headed clear by Kaiyne Woolery.

Saints were having a good spell in the match and 2 minutes later following good build-up play by Saints and the ball was played to Craig on the edge of the box however, the powerful strike from the midfielder went wide of the target. 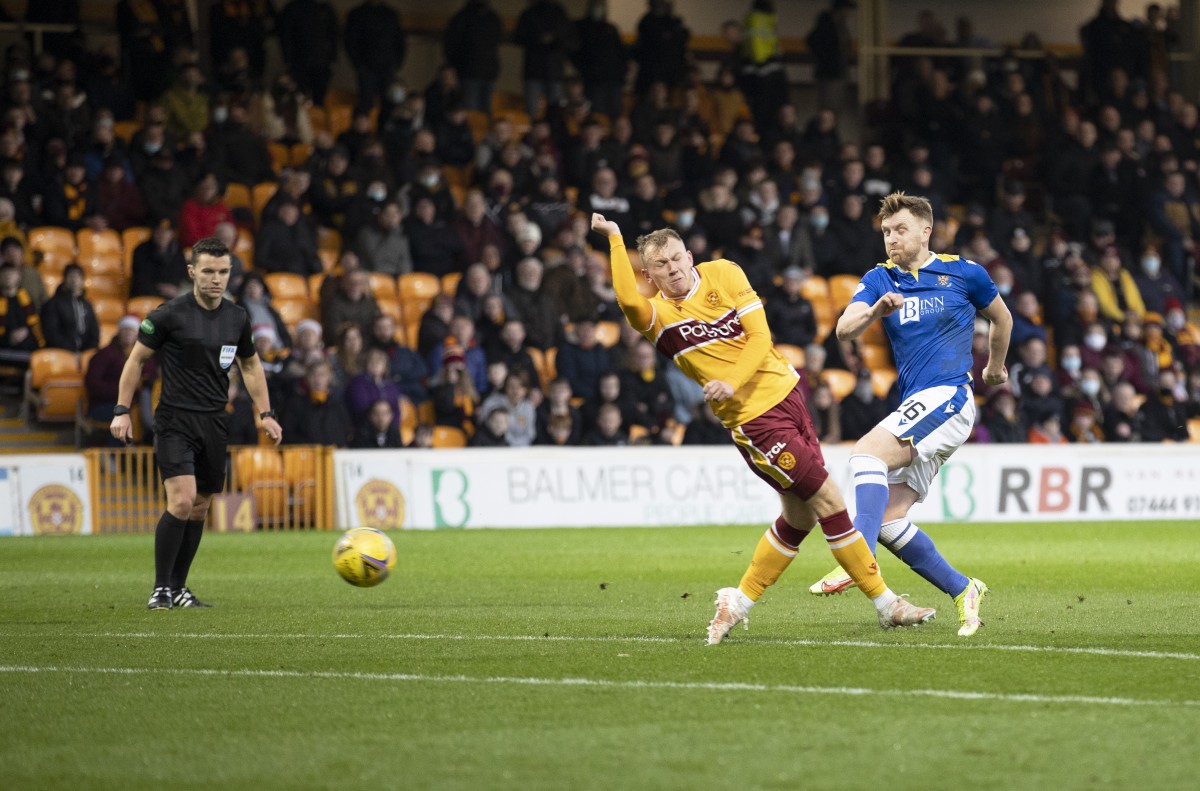 The home side were claiming for a penalty with 9 minutes of the first half remaining as Bevis Mugabi went down just inside the box following a tackle by Booth but the appeals were dismissed by referee Nick Walsh.

Saints got the first sight of goal in the second half on 54 minutes as Craig slipped the ball in the path of May. The Saints forward then carried the ball forward before having a go from distance however, his effort didn’t trouble Kelly.

Then a minute later Motherwell doubled their lead. A long ball forward by Sondre Solholm Johansen played in van Veen and he twisted and turned in the box to wriggle clear of McCart before guiding his strike through Clarks’ legs. 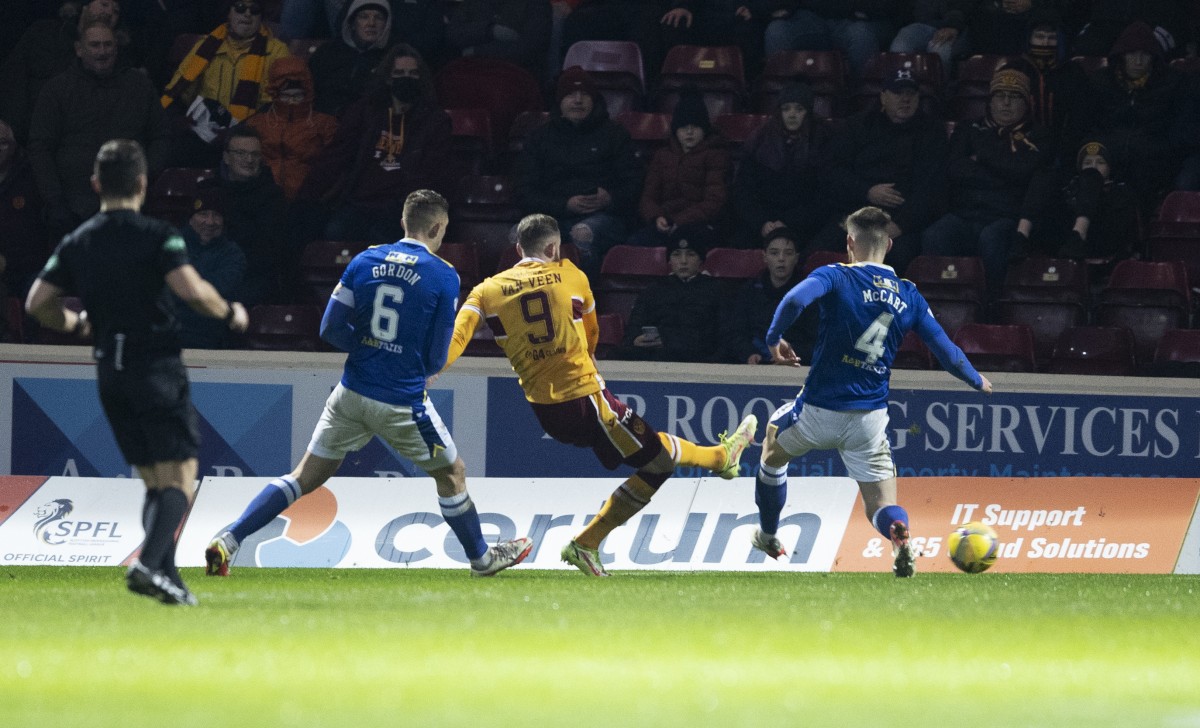 Saints then made their first change of the game as Jacob Butterfield came on to replace James Brown. Another change then followed on 67 minutes as Liam Craig made way for Michael O’Halloran.

A brilliant through ball from Butterfield on 69 minutes played in May who gathered the ball before cutting it back to Booth who saw his strike at goal tipped over the bar by Kelly for a corner.

The first booking of the game came on 75 minutes as former Saints player Sean Goss was shown a yellow card for a foul on Solomon-Otabor. 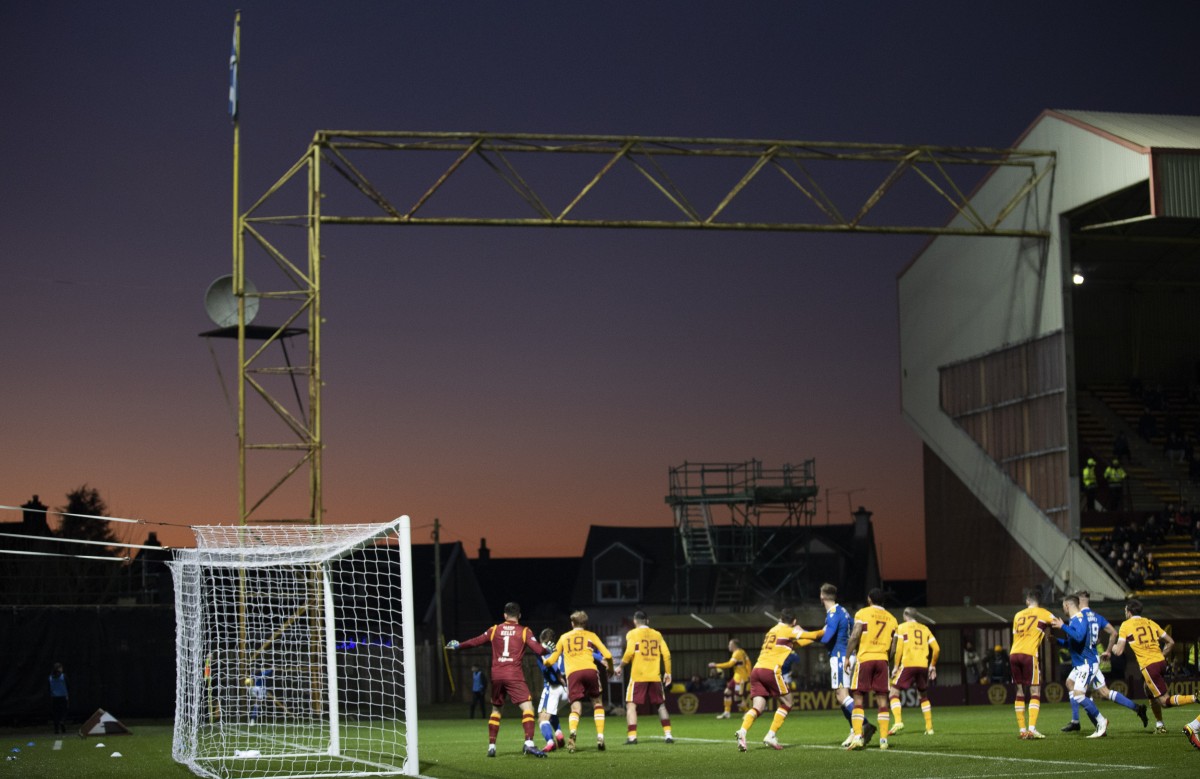 PHOTO: The sun sets as Motherwell defend a corner kick

Saints continued to press in the closing stages but they couldn’t find a way back into the match as Motherwell saw the game out to take the 3 points.

Picture: Stevie May is tackled by Sondre Solholm Johansen