Saints booked their place in the semi-finals of the Scottish Cup this evening as they defeated Rangers 4-2 on penalties after the match had finished 1-1 after extra time.

After a goalless 90 minutes the match went to extra time and Rangers took the lead with 4 minutes remaining as captain James Tavernier headed home a Joe Aribo cross.

However, Saints got a deserved equaliser 2 minutes into added on time as Liam Craig’s corner was headed towards goal by Zander Clark and Chris Kane knocked the ball over the line to take the match to penalties.

Clark would be the hero for Saints in the penalty shootout as he saved efforts from James Tavernier and Kemar Roofe. That set up Ali McCann to win it for Saints and the Northern Ireland internationalist despatched the ball past Allan McGregor to send Saints into the last four.

Saints can now look forward to tomorrow’s semi-final draw with the ties due to take place on the weekend of the 8th and 9th May.

Next up for Saints is a league game at Hibs on Saturday, kick off 3pm.

Saints headed to Ibrox this evening to take on Rangers in the quarter-finals of the Scottish Cup. It was the second meeting of the sides in four days after Wednesday’s 1-1 draw at McDiarmid Park. Callum Davidson made one change from the team which started in midweek as Scott Tanser came in to replace Callum Booth who dropped to the bench, whilst Guy Melamed had recovered from the migraine which saw him have to come off after 22 minutes on Wednesday night. Rangers manager Steven Gerrard made five changes to the team that started on Wednesday as Jon McLaughlin, Jack Simpson, Scott Wright, Kemar Roofe and Cedric Itten all dropped to the bench and they were replaced by Allan McGregor, Filip Helander, Ryan Kent, Joe Aribo and Alfredo Morelos.

It was a glorious sunny evening at Ibrox as David Wotherspoon got the match underway for Saints. Callum Davidson’s side made a good start to the match and on 7 minutes Stevie May did well to win Saints the first corner of the match, knocking the ball off Gers captain James Tavernier.

Then 2 minutes later Saints won another corner as Jason Kerr’s strike was headed behind by Filip Helander. Wotherspoon took the corner from the left and Allan McGregor came out well to punch the ball clear. The ball then broke to Ryan Kent who turned Ali McCann as Rangers hit Saints on the break. Kent slipped the ball to Alfredo Morelos who then played in Glen Kamara but the shot from the former Dundee midfielder was well saved by Zander Clark.

On 12 minutes a Saints corner from the right was taken by Liam Craig and his left footed delivery fell perfectly to Scott Tanser but his powerful volley was excellently pushed away by McGregor.

The hosts were claiming for a penalty on 14 minutes as Morelos clashed with Rooney in the box but referee Alan Muir dismissed the appeals from the Gers.

Kent went on a surging run to the byline 8 minutes later before cutting the ball back to Ianis Hagi but the header from the Romanian midfielder was comfortably gathered by Clark.

As the match approached the half an hour mark Rangers created a couple of chances to take the lead. Firstly, a Morelos header was easily gathered by Clark on 27 minutes and then 4 minutes later a Borna Barišić cross from the left picked out Aribo but his half volley went wide.

The final chance of the half fell to the hosts as Barišić’s corner from the left was head on by Helander, picking out Morelos at the back post, but the Colombian forward sliced his effort over. 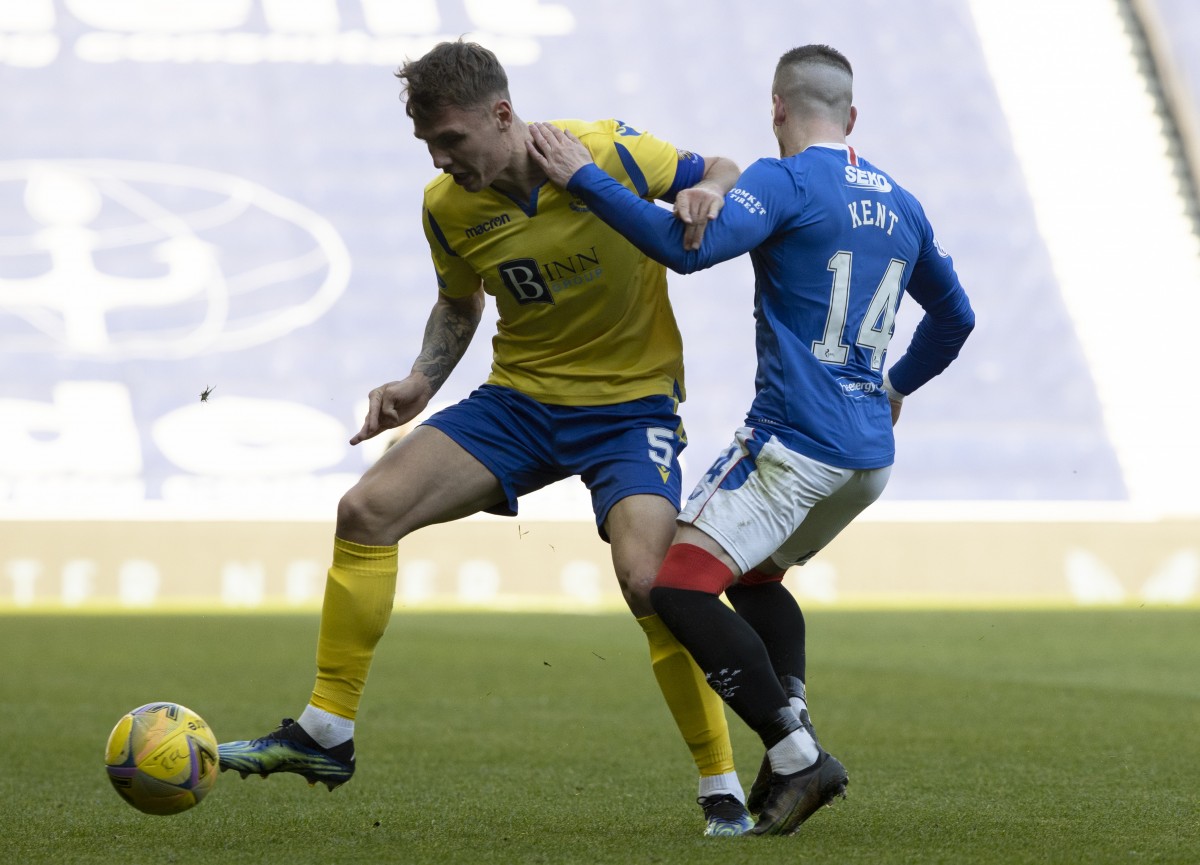 Rangers controlled the early proceedings of the second half and 10 minutes into the half the Gers created a chance to take the lead as Morelos had a shot from a tight angle which was well saved by Clark.

On 58 minutes Saints made their first change of the game as Chris Kane came on to replace Guy Melamed.

Then a couple of minutes later Rangers were inches away from taking the lead as the cross from the right picked out Morelos in the Saints box however, his header hit Clark’s right-hand post and the ball then bounced up into the hands of the Saints number one.

Saints made a second change on 71 minutes as David Wotherspoon was replaced by Craig Bryson.

On 74 minutes the hosts were awarded a free kick on the edge of the area after Kent was fouled by Jamie McCart. Barišić took the free kick and his curling effort was pushed behind by Clark for a corner.

A minute later Saints made their third change of the evening as Michael O’Halloran was introduced into the action, replacing Stevie May.

Saints then forced a couple of corners in succession and from the second corner Craig sent a deep delivery in from the right which Kerr made a connection with but his looping effort was gathered by McGregor.

With 9 minutes remaining Morelos looked certain to score with a header at the back post but Clark made an excellent save to deny the Rangers forward.

Saints were next to create a chance on 83 minutes as O’Halloran got his shot away at the second attempt but McGregor saved the strike with his legs as the ball went behind for a corner. Craig’s corner from the right was met by McCart but the header from the defender went over.

Both sides were going for it in the closing stages and with 4 minutes remaining Gers substitute Scott Wright played a neat one-two with fellow substitute Kemar Roofe as Wright broke into the box but Clark again made a fantastic save. Play then continued and the ball was sent back over into the box but Roofe’s header was gathered by Clark.

That would be the last chance of the second half as the match went into extra time.

6 minutes into the first half of extra time Tavernier’s effort took a deflection off Tanser as the ball went behind for corner. Tavernier’s delivery from the left picked out Helander at the near post but his header was well saved by Clark.

On 101 minutes Saints were forced to make a change as Callum Booth came on to replace the injured Scott Tanser.

Rangers created another chance on 103 minutes but Roofe’s header was saved by Clark.

Barely 20 seconds into the second period of extra time Saints were inches away from taking the lead. Kane knocked the ball back to Shaun Rooney who had a go from the edge of the box however, his effort went narrowly wide of McGregor’s left-hand post.

Then shortly after Saints were presented with a great opportunity to break the deadlock as O’Halloran raced in on goal, following a neat flick on from Kane, but McGregor was out quick to block the shot.

Saints continued to put the Ibrox side under pressure and after some more good play on 114 minutes the ball broke to Liam Craig however, his long range went over.

However, with 4 minutes remaining Rangers took the lead. Aribo’s cross from the right was perfect for Tavernier who got up well to head the ball down into the bottom corner of the net.

Saints though showed great character in the final couple of minutes and they got a deserved equaliser 2 minutes into stoppage time. Clark went forward for a corner which Craig took from the right and the midfielder’s delivery into the Gers box was met by the unmarked Clark who headed the ball down and it took a touch off Kane before going over the line. 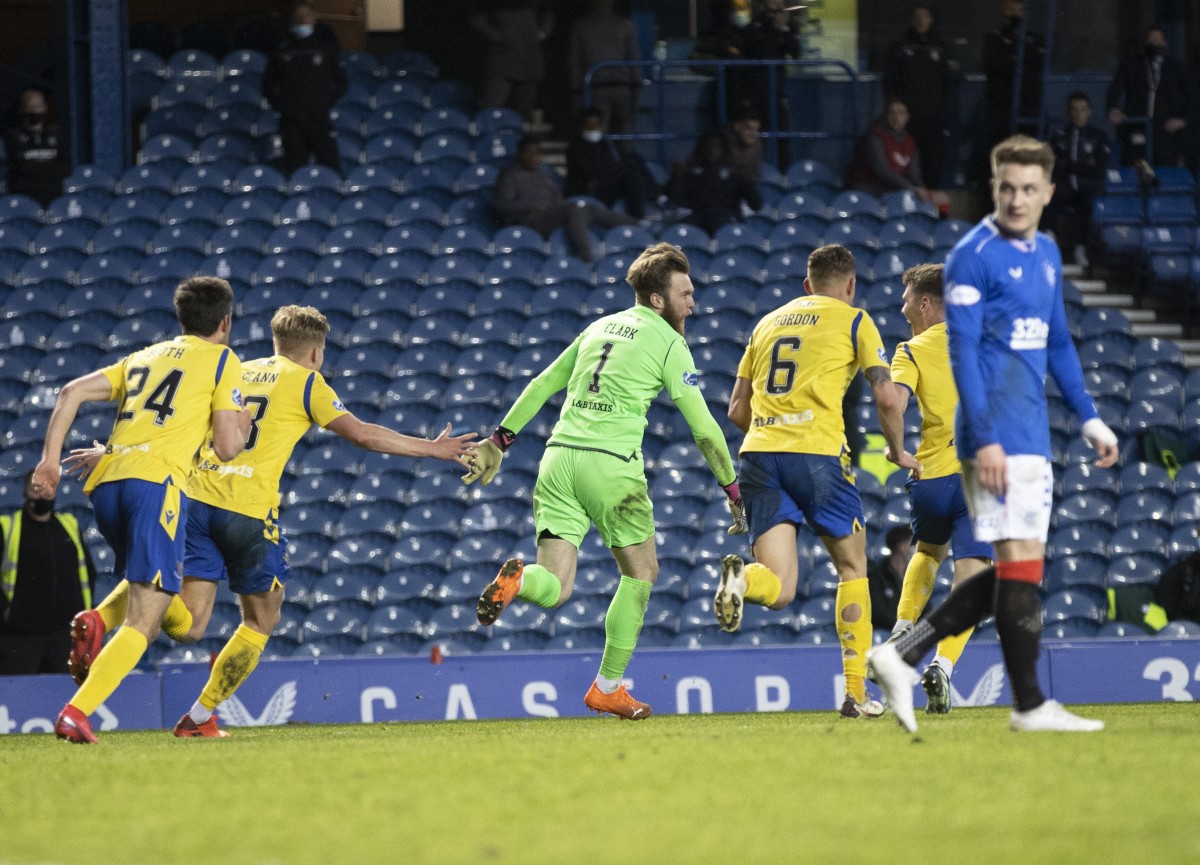 That goal took the match to penalties and up first was Tavernier but Clark was the hero again as he saved the effort from the Gers captain. Craig, Booth and Kerr all scored for Saints, whilst Barišić and Jermaine Defoe netted for the hosts.

Kemar Roofe then saw his penalty saved by Clark and that gave Ali McCann the chance to win it for Saints and the midfielder did just that as he coolly despatched the ball past McGregor to book Saints return to Hampden. 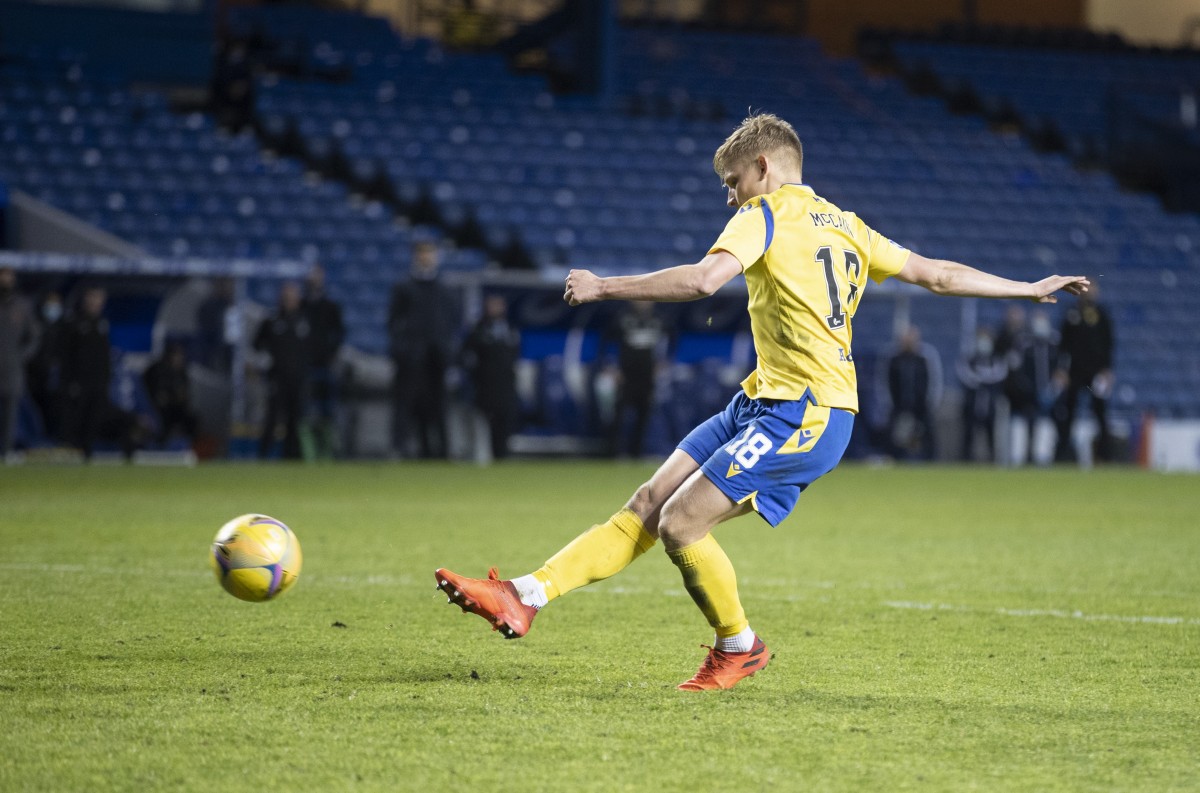 Picture: The Saints players celebrate after winning the penalty shootout

Our Scottish Cup Journey So Far...