This evening’s defeat leaves Saints still bottom of the league although they will look to bounce back on Saturday at Motherwell, kick off 3pm.

Saints headed west this evening as they travelled to the west end of Glasgow to take on Rangers at Ibrox. Saints controversially lost 1-0 to Aberdeen on Saturday and Callum Davidson made four changes to his starting eleven for tonight’s league game. Reece Devine, Michael O’Halloran, Eetu Vertainen and Jacob Butterfield, who was making his debut after joining the club earlier this week on a deal until the end of the season, came into the starting eleven to replace Callum Booth, Craig Bryson, Glenn Middleton and Chris Kane. Rangers won 2-0 at Hearts on Sunday and manager Giovanni van Bronckhorst made one change to his team this evening as Fashion Sakala dropped to the bench and he was replaced by Ianis Hagi.

Alfredo Morelos got the match underway for Rangers and it was the hosts who created the first chance of the match after 3 minutes. A flowing passing move by the Ibrox side saw Joe Aribo play the ball to the feet of Ryan Kent who cut inside onto his left foot before seeing his effort saved by Zander Clark.

Clark was called into action again 5 minutes later as Glenn Kamara setup Kent who did well to turn Shaun Rooney before seeing his effort saved by the Saints number one who got a strong left hand to the strike.

It was one-way traffic in the opening stages and on 12 minutes Aribo came within inches of giving the Gers the lead as his long-range effort clipped the outside of the post. Then 2 minutes later another Kent run in the box saw the midfielder twist and turn before unleashing a strike which Clark saved well with his right leg at his near post.

On 22 minutes Rooney’s cross into the danger area was cut out or a corner by Borna Barišić however Ali Crawford’s delivery in the box was comfortably dealt with by the Gers defence. 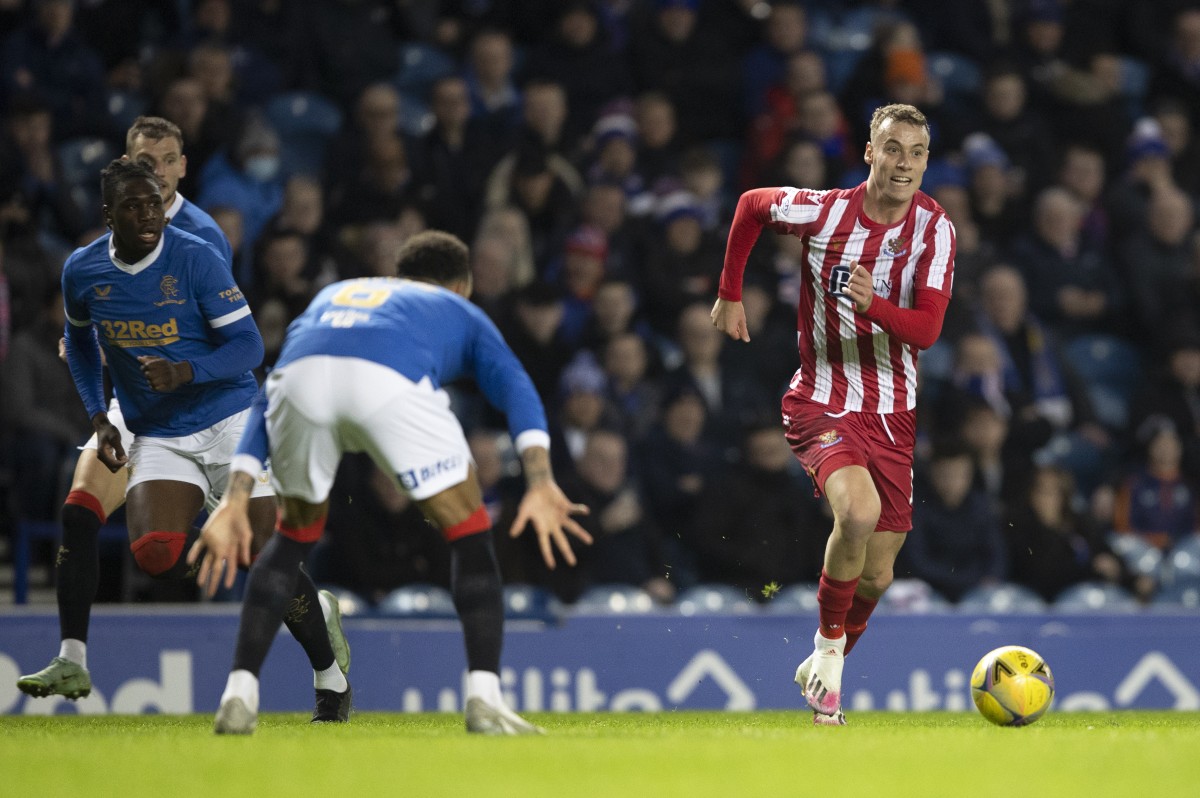 PHOTO: Eetu Vertainen tries to get through the Rangers defence

The 2 minutes later a neat one-two between Aribo and Morelos saw the former play the ball across the six-yard box however, Rooney made a brilliant defensive tackle to turn the ball behind with Kent lurking looking to get on the end of the cross. Saints were putting in a strong defensive display and on 26 minutes James Brown made a brilliant tackle to deny Morelos after the Columbian had beaten the offside trap.

Then just before the half an hour mark Ianis Hagi rippled the side netting with the strike from the edge of the area.

The pressure from the hosts eventually told on 43 minutes as they took the lead. Barišić’s corner from the left was played deep into the Saints box and the ball was flicked on by Connor Goldson to Morelos who headed the ball home from close range at the far post.

Then just before half time Rangers almost got a second as Kent weaved his way into the box before dragging his effort wide.

Before the second half could get underway Saints made a change as Stevie May came on to replace Eetu Vertainen.

4 minutes into the second half Rangers doubled their lead. Aribo played a brilliant ball forward as Morelos broke away down the right channel before sending over an inviting ball to Kent who slotted home at the back post. 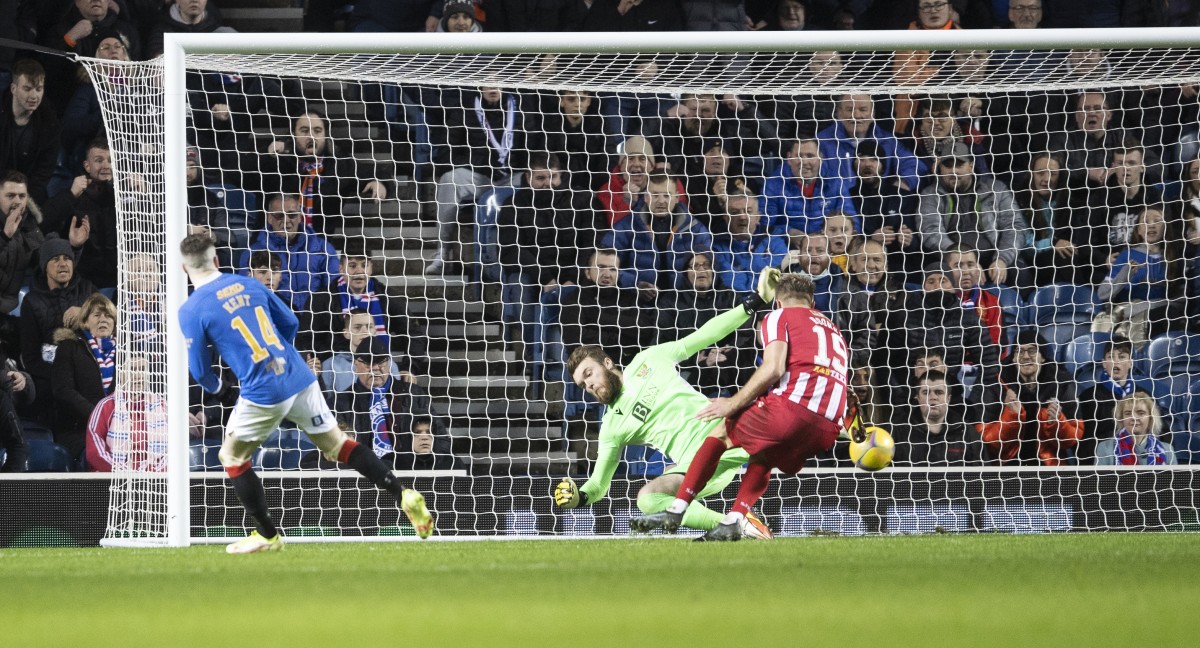 The pressure from the hosts continued as they looked intent on adding to their goal tally and on the hour mark Aribo setup Scott Arfield but the strike from the midfielder was straight at Clark who comfortably gathered.

Then shortly after Reece Devine did well to win the ball from Gers captain James Tavernier out wide and the on-loan Manchester United defender advanced into the box before dragging his effort wide.

Saints were enjoying a good spell in the match and on 65 minutes Crawford floated a good cross into the box which Jamie McCart got on the end of however, the defender couldn’t direct his header on target.

On 68 minutes Saints made their second change of the game as Viv Solomon-Otabor came on to replace Michael O’Halloran. 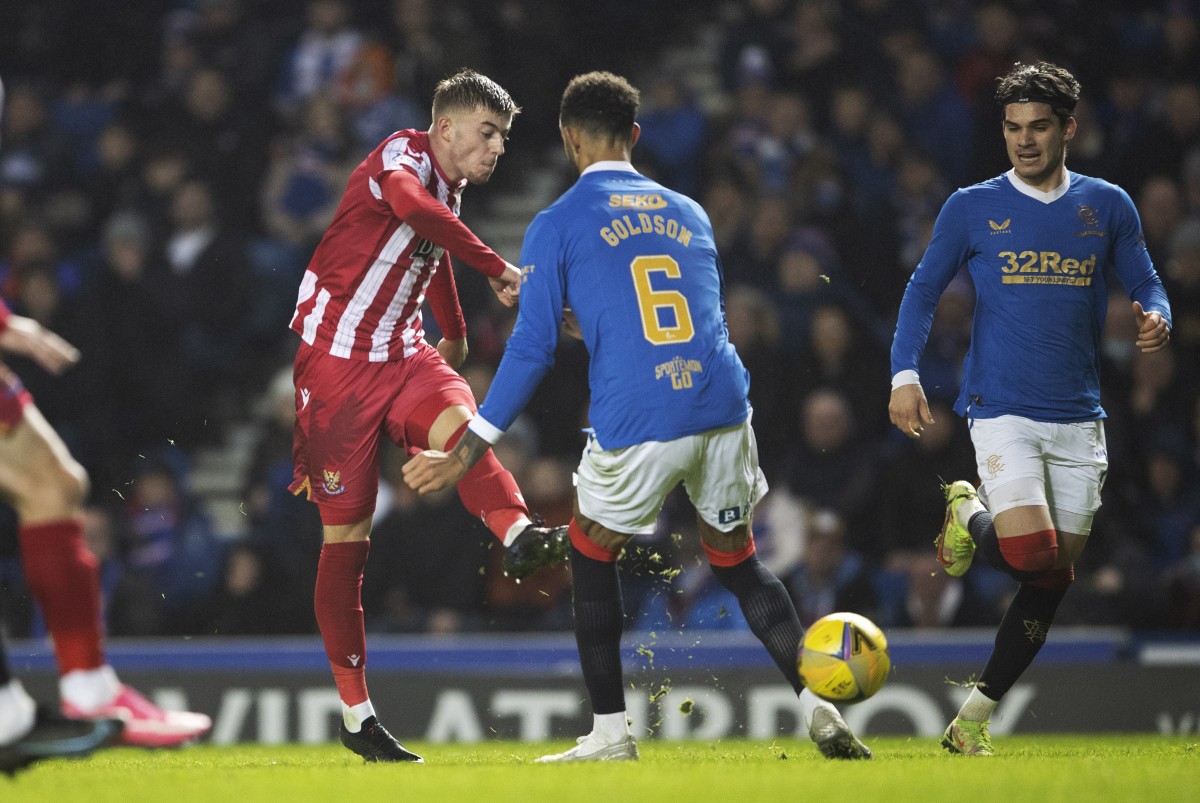 PHOTO: Reece Devine puts his strike wide of the target

Saints continued to look for a way back into the game and on 72 minutes Saints won possession deep in the Gers half and Liam Craig broke into the box and just as he was about to unleash an effort at goal he went down in the box under pressure from Glen Kamara and appealed for a penalty. However, his appeals were dismissed by referee Euan Anderson who booked the Saints midfielder for diving.

Then a minute later Rangers went on the attack again as Clark made a good save at his near post with his left foot to deny Hagi.

A third change for Saints then came on 79 minutes as Jacob Butterfield was replaced by Craig Bryson.

Saints battled away in the final 10 minutes as they looked to pull a goal back to make the closing stages interesting. However, on 89 minutes Arfield came close to a third for the hosts but he couldn’t get his effort on target.

As the match entered 2 minutes of additional time Saints created a chance to half the deficit.  Crawford fed the ball into Craig however, the midfielder’s effort was straight at Allan McGregor in the home goal as Rangers saw the game out to wrap up the 3 points.