Ross County came from behind to defeat Saints 3-1 in Dingwall this afternoon.

Callum Hendry gave Saints the lead on 24 minutes as he got on the end of a Tom Sang cross to send a delightful header beyond Ross Laidlaw.

However, Regan Charles-Cook levelled the match for the hosts with 10 minutes of the first half remaining. Charles-Cook then got his and County’s second of the afternoon on 53 minutes before Joseph Hungbo added a third to end the game as a contest.

Next up for Saints is a home game against Rangers on Wednesday evening, kick off 7:45pm.

Saints headed north today as they travelled to Dingwall to take on Ross County at The Global Energy Stadium. A second half header from Jamie McCart saw Saints defeat Hearts 2-1 at McDiarmid Park last Saturday and Callum Davidson made one change to his starting eleven this afternoon as Jacob Butterfield came in to replace Murray Davidson. Ross County lost 2-0 at Hibs last weekend and manager Malky Mackay made two changes to his team today. Both Jake Vokins and Dominic Samuel dropped to the bench and they were replaced by Keith Watson and Joseph Hungbo.

Glenn Middleton got the match underway for Saints and the Perth side were awarded a free kick after 4 minutes as Melker Hallberg was fouled by Harry Paton. Jacob Butterfield took the free kick however, his delivery into the box was only cleared as far as Tony Gallacher but his strike was comfortably held by Ross Laidlaw in The Staggies goal.

It was a strong start to the match by Saints and on 15 minutes they were given another chance to float the ball into the box as they were awarded a free kick following a foul on Tom Sang by Regan Charles-Cook. Hallberg took the free kick and his delivery into the box was met by Callum Hendry but the forward couldn’t direct his header on target.

Then on 24 minutes the pressure from Saints eventually told as they took the lead. Hallberg played a good ball out wide to Sang and he cut the ball back onto his left and sent over a delightful cross to the back post which Hendry got on the end of it to plant a beautiful header into the top corner of the net. 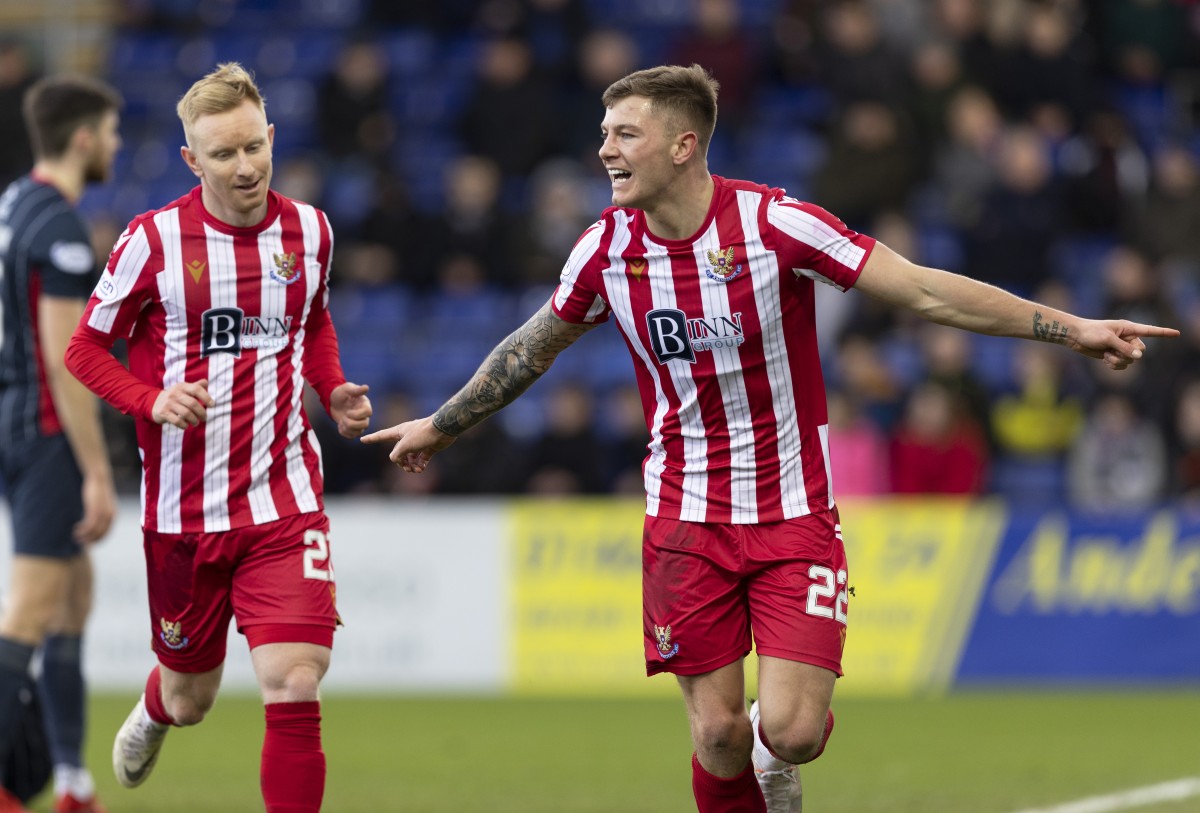 Saints were controlling the game however, the hosts levelled the match with 10 minutes of the first half remaining. A fine passing move by The Staggies ended with Paton poking the ball into the path of Regan Charles-Cook and he curled his strike from 20 yards into the far bottom corner of the net.

Paton got the second half underway for County and the midfielder was quickly involved in the action in the action in the first minute of the half as he cut the ball back to Hungbo who curled as low ball across the box which Charles-Cook was inches away from making a connection with.

Ross County had made a strong start to the second half and on 52 minutes McCart made an important block as he turned the ball behind for a corner as Jordan White looked to get on the end of an inviting Charles-Cook cross. 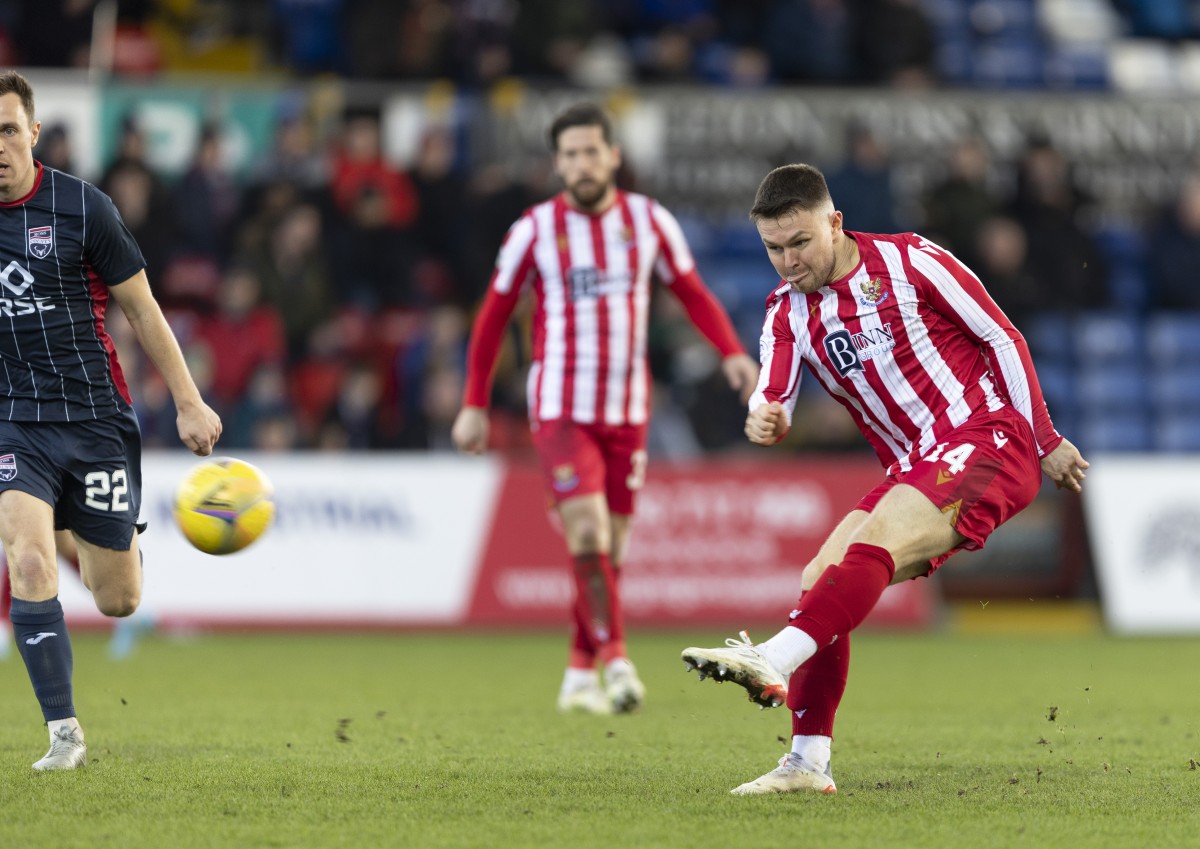 Then a minute later County took the lead. Baldwin sent a long throw into the Saints box which was allowed to bounce and the ball broke to Charles-Cook at the back post who sent a fine looping effort beyond Elliott Parish.

Saints made their first change of the game on 61 minutes as Nadir Çiftçi came on to replace Tony Gallacher.

However, Ross County made it 3-1 on 66 minutes. A long ball forward by Keith Watson was cut back by White in the path of the advancing Hungbo who sent a powerful low strike beyond Parish. 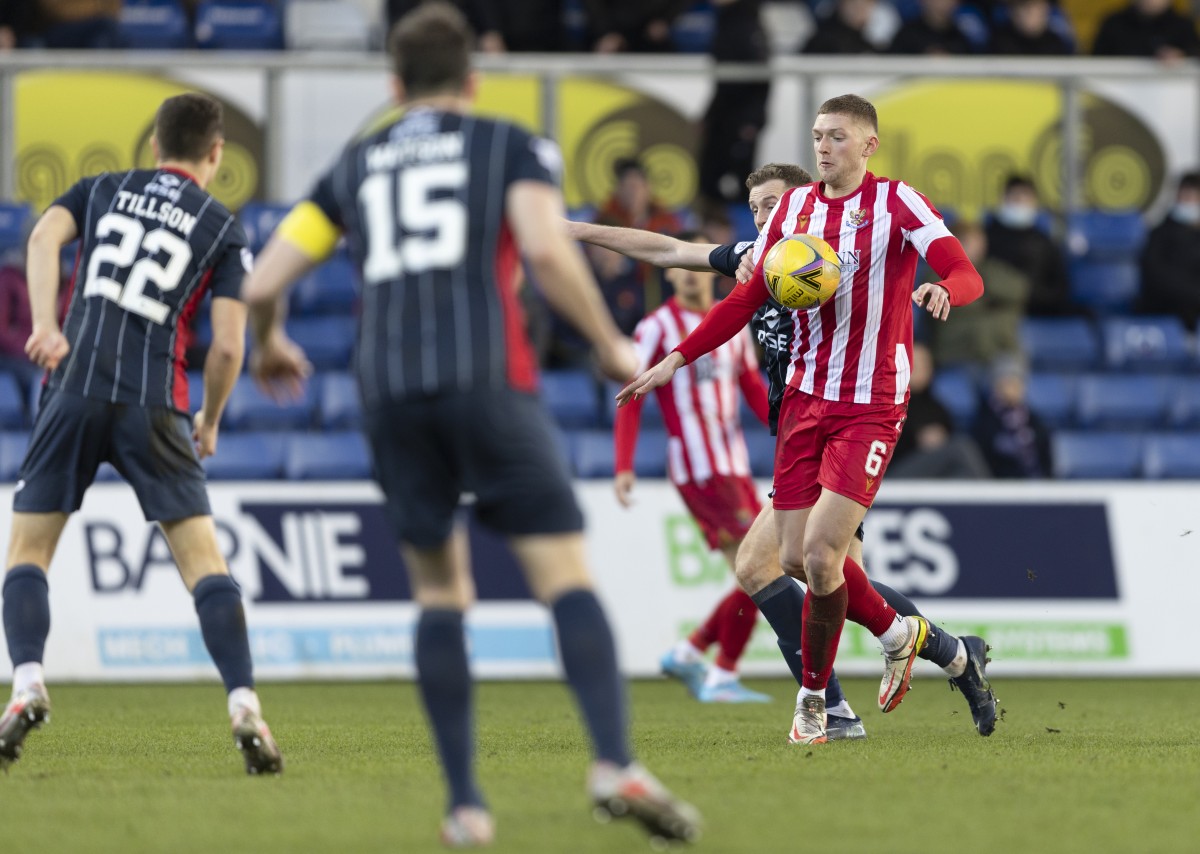 PHOTO: Liam Gordon tries to force a way through the County defence

That prompted Saints to make a double change as Charlie Gilmour and Theo Bair came on to replace Jamie McCart and Jacob Butterfield.

Saints continued to battle as they looked to try and salvage something from the game and Michael O’Halloran was introduced late on, replacing Ali Crawford. However, Saints struggled to test Laidlaw with the closest they came was deep into the 3 minutes of additional time as Middleton’s cross from the left broke to Bair but Laidlaw comfortably gathered the ball.