Saints finished their preparations for the new season this afternoon as they drew 0-0 in pre-season friendly with Fleetwood Town at McDiarmid Park.

Both sides created chances during the match and Saints best chance of the first half saw a free kick from David Wotherspoon hit the side netting.

Saints started the second half strongly and had the visitors penned in their own half for large spells. The Perth sides best chance fell to Murray Davidson but the midfielder’s header was well held by Alex Cairns in the Fleetwood goal.

With the pre-season friendlies now complete Saints will now turn their attentions to their first game of the new cinch Premiership season which gets underway next Saturday as they head to Dingwall to take on Ross County, kick off 3pm.

Saints welcomed English League One side Fleetwood Town to McDiarmid Park this afternoon for their final pre-season friendly before there league campaign gets underway next weekend. Saints defeated Arbroath 4-1 on Wednesday evening at Gayfield and Callum Davidson made six changes to the team that started in midweek. Elliott Parish, Shaun Rooney, Hayden Muller, Callum Booth, Murray Davidson and Michael O’Halloran all dropped the bench and they were replaced by Zander Clark, James Brown, Jason Kerr, Liam Gordon, Jamie McCart and Chris Kane.

It was a fine sunny afternoon in Perth as David Wotherspoon got the match underway for Saints and they created the first chance of the match after 2 minutes. Captain Jason Kerr sent a good long ball forward, playing in Callum Hendry who beat the offside trap. Hendry then broke into the box and then tried to cut inside but Tom Clarke did well to get back and block the effort from the Saints forward.

On 8 minutes a good move by Fleetwood saw Harrison Biggins play the ball out wide to Max Clark who advanced down the left before sending over an inviting cross into the box picking out Jed Garner but his header didn’t trouble Zander Clark.

James Brown won Saints a free kick in a promising position on 23 minutes after he had been fouled by Jay Matete. Both Liam Craig and David Wotherspoon stood over the free kick but it was taken by the latter but his effort hit the side netting. 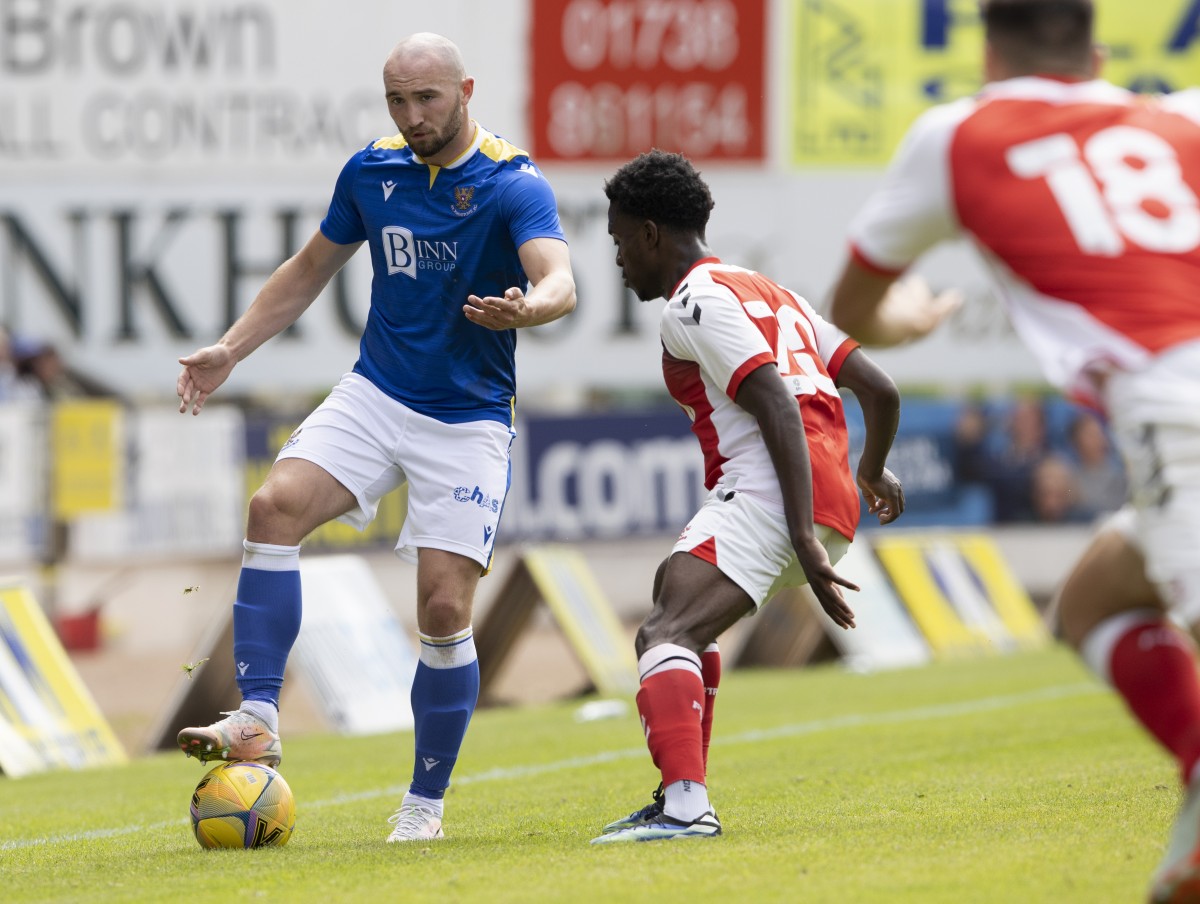 Just before the half an hour mark Biggins had an effort at goal which deflected off Jamie McCart for a corner which was comfortably dealt with by the Saints defence.

With 6 minutes of the first half remaining a good ball forward by Hendry played in Reece Devine who carried the ball to the edge of the Fleetwood box before crossing into the danger area but unfortunately no one could get on the end of it. However, Wotherspoon gathered the loose ball out wide on the right and he passed it to Craig Bryson who played in Liam Craig but his left footed effort was deflected behind for a corner.

Then on 42 minutes Brown passed to Wotherspoon who played a nice touch to switch the ball to his other foot before seeing his curling effort go inches over. 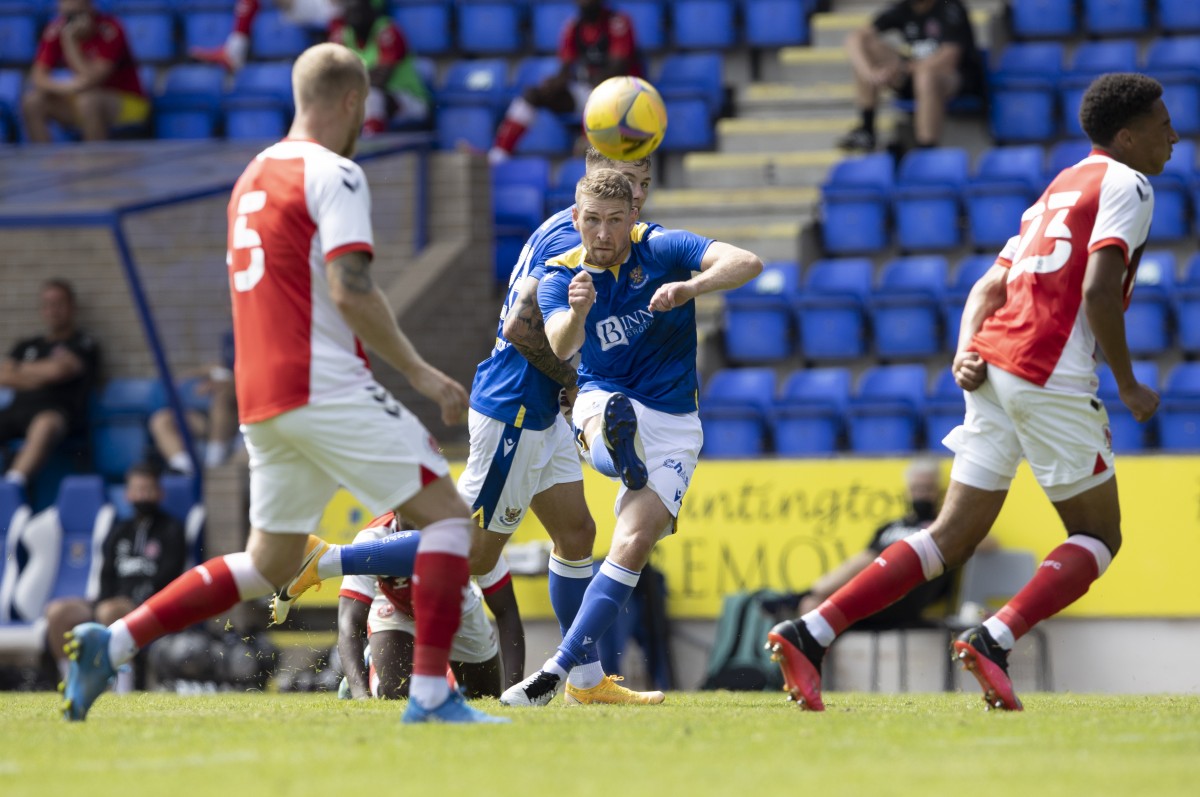 PHOTO: David Wotherspoon puts his effort over the bar

Before the second half could get underway Saints made four changes as Cammy Ballantyne, Murray Davidson Ali McCann and Michael O’Halloran came on to replace Liam Craig, Craig Bryson, David Wotherspoon and Chris Kane.

5 minutes into the second half Saints were awarded a free kick out wide on the left after Devine had been fouled by Matete. The free kick was taken by Ballantyne who floated a good ball into the box which Hendry made a connection with however, his header didn’t trouble Alex Cairns in the Fleetwood goal.

Saints started the second half brightly and on 55 minutes Brown picked out Davidson with a good cross into the box but the header from the Saints midfielder was comfortably gathered by the Town keeper.

Saints continued to create chances and on 62 minutes McCann played a lovely through ball to O’Halloran who saw his cross into the Town box cut out by Clarke for a corner. Ballantyne took the corner from the right but his delivery was headed clear by former Rangers midfielder Jordan Rossiter.

Saints then made another change on 64 minutes as James Brown was replaced by Shaun Rooney. A couple of more changes then followed as both Hayden Muller and Jordan Northcott were given some game time as they replaced Liam Gordon and Callum Hendry whilst the visitors made 8 changes to their team.

The closing stages saw little in the way of chances created although with 4 minutes remaining Paddy Lane played a low ball in from the left as he tried to pick out Max McMillan in the centre of the box but forward couldn’t make a connection with the delivery as Saints cleared the danger.

However, the biggest cheer of the afternoon was the announcement that Saints had been granted an exemption from the Scottish Government to play their Europa League Third Round Qualifying match at McDiarmid Park next month.