European football will be returning to McDiarmid Park next season after Saints got the point they needed against Livingston this afternoon to secure fifth place in the Scottish Premiership.

In a match of few chances Stevie May had Saints best chance of the game but his volley on the turn was saved by Livingston keeper Max Stryjek.

Whilst Zdeněk Zlámal made two good saves to ensure Saints got the point they required to secure fifth place. Firstly, the on-loan Hearts keeper was at full stretch to tip a Jay Emmanuel-Thomas effort behind for a corner. Then in the second half Zlámal made a great block with his legs to deny Jaze Kabia after the Irish winger had won the ball from Shaun Rooney.

Next up for Saints is the Scottish Cup final against Hibernian at Hampden Park next Saturday, kick off 2pm.

Saints welcomed Livingston to McDiarmid Park this lunchtime for their final league game of the season. Saints went into today’s match knowing that if they avoided defeat to the West Lothian side they will finish fifth in the Scottish Premiership and qualify for Europe. There were five changes to the side that started against Celtic on Wednesday evening as Charlie Gilmour, Craig Bryson, Glenn Middleton, Craig Conway and Chris Kane all dropped to the bench and they were replaced by Murray Davidson, Liam Craig, David Wotherspoon, Stevie May and Guy Melamed. Livingston lost 3-0 at home to Rangers in midweek and manager David Martindale made four changes to his starting eleven for today’s game. Jack McMillan, Marvin Bartley, Matej Poplatnik and Jaze Kabia came in to replace Nicky Devlin, Jason Holt, Craig Sibbald and Josh Mullin.

David Wotherspoon got the match underway for Saints and after an even opening to the match it was Saints who would great the first opportunity of the game on 12 minutes. Wotherspoon played the ball out wide to Callum Booth who advanced down the left before sending over a cross into the Livi box which Lions keeper Max Stryjek couldn’t make a proper connection with as he tried to punch the ball clear. The ball then bounced around the Livi box as both Murray Davidson and James Brown tried to get on the end of it before the visitors eventually were able to clear their lines.

On 22 minutes Saints were awarded a free kick 25 yards out after Wotherspoon had been fouled by Djibril Diani. Both Wotherspoon and Liam Craig stood over the free kick but it was the former who took it as his effort deflected off Jay Emmanuel-Thomas before going behind for a corner. Wotherspoon took the corner as he delivered the ball into the box from the left and it bounced around the box before Stevie May saw his volley on the turn saved by Stryjek.

Zdeněk Zlámal made a good save to turn an Emmanuel-Thomas strike behind for a corner on 27 minutes. From the resultant corner Jaze Kabia’s delivery from the left was headed clear by Davidson. 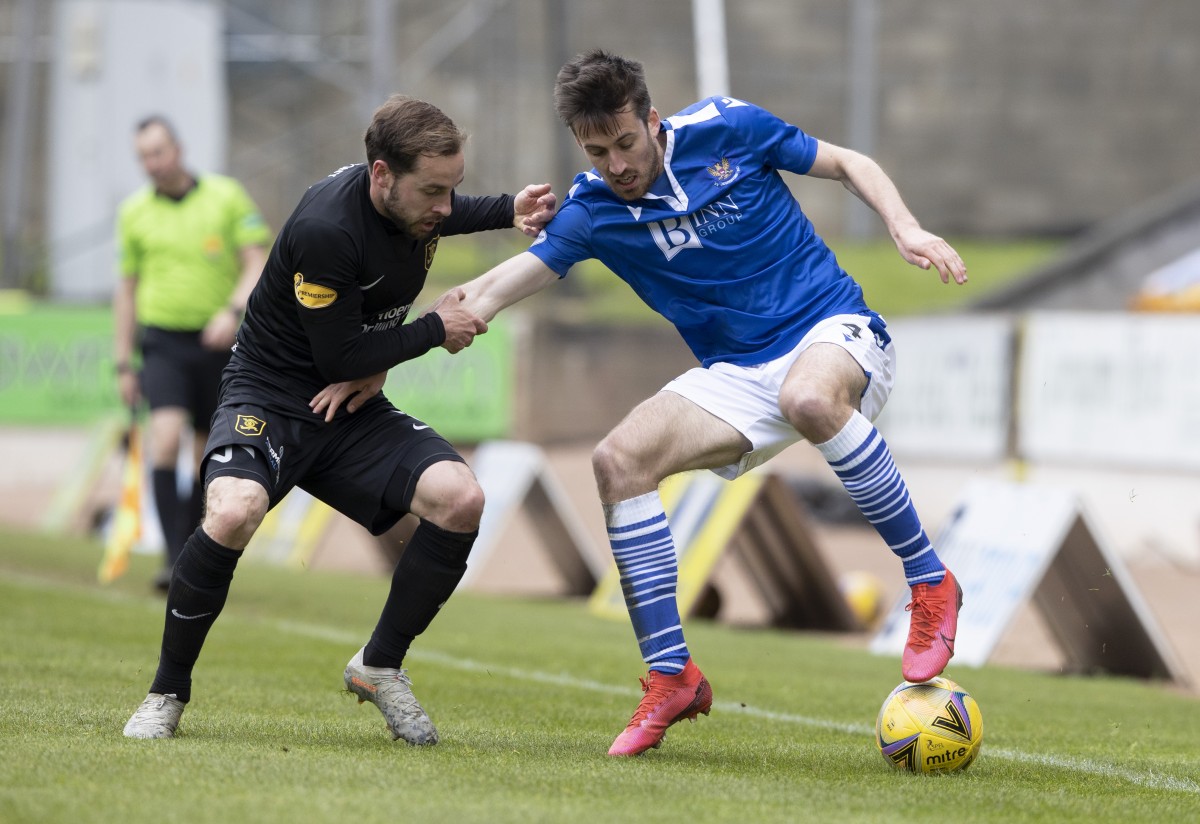 PHOTO: Callum Booth holds off the challenge from Scott Pittman

A foul by Jon Guthrie on Davidson saw Saints awarded a free kick in an inviting position on 34 minutes. Wotherspoon delivered a good cross into the box from the free kick, picking out Davidson who flashed a header wide however, play was pulled back as the Saints midfielder had been in an offside position.

On 55 minutes Saints went on a great counter attack. Rooney broke down the right before slipping the ball to Wotherspoon who showed great feet to switch the play as he played in Booth who carried the ball to the byline before sending over a cross into the box which was gathered by Stryjek.

Saints made their first change of the game 2 minutes later as Glenn Middleton replaced Guy Melamed.

Saints were creating the better opportunities and on 65 minutes Wotherspoon sent over another good cross into the Livi box but Matej Poplatnik headed the ball behind for corner.

Callum Davidson then made a double change as Chris Kane and Craig Conway replaced Stevie May and David Wotherspoon respectively.

Saints continued to press and on 68 minutes after a succession of Conway crosses into the box were blocked by the Livi rearguard the ball eventually broke to Middleton but he couldn’t direct his 20 yard effort on target.

On 72 minutes Kabia won the ball from Shaun Rooney for the visitors before unleashing a shot at goal which Zlámal saved brilliantly with his legs. The ball then broke to Kabia as he got a second bite at it however, the Irish winger went down in the box after clashing with Jason Kerr but referee Craig Napier dismissed the penalty appeals from the Lions. 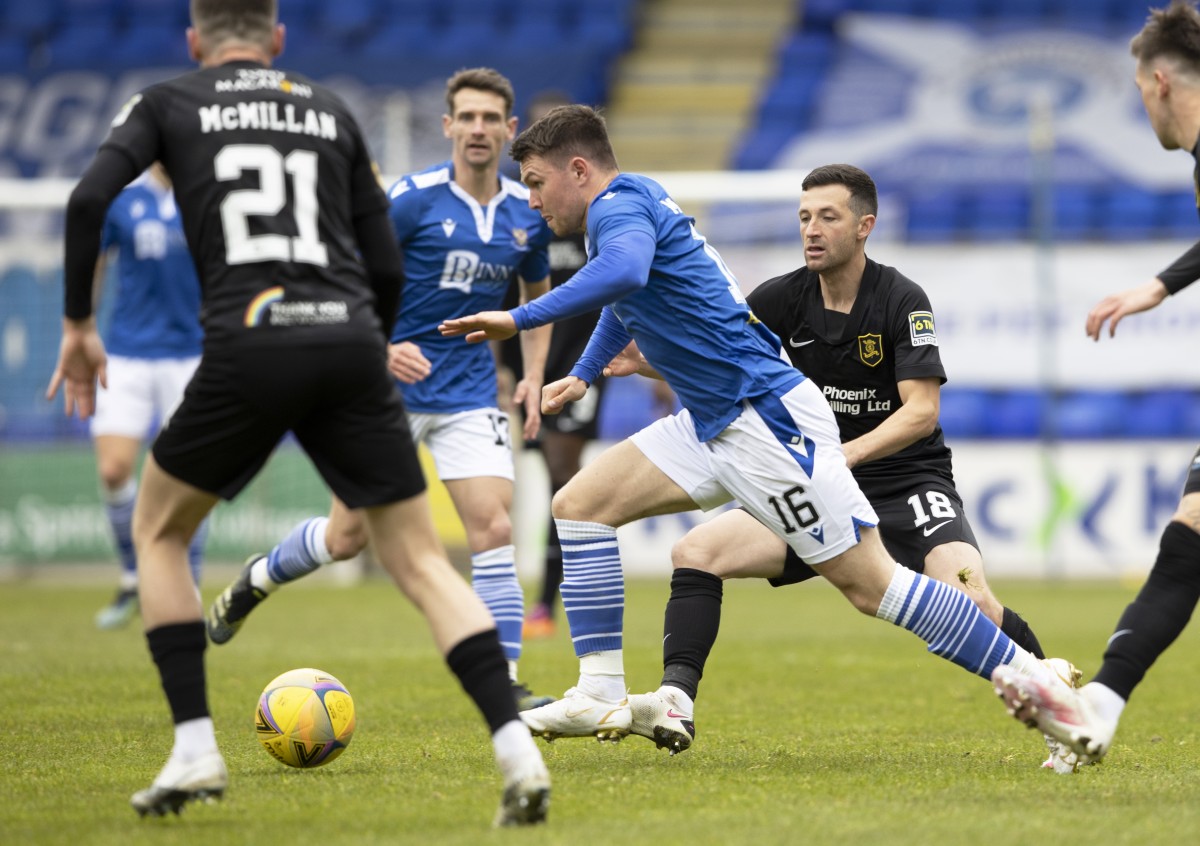 PHOTO: Glenn Middleton gets in between Jack McMillan and Jason Holt

With 6 minutes remaining Saints made another change as Craig Bryson replaced Callum Booth.

Livingston were causing more problems for Saints in the closing stages of the match as the West Lothian side looked to get a late goal that would see them leapfrog Saints into fifth place. However, Saints remained calm and saw the game out to secure the point they needed to ensure that European football will return to McDiarmid Park next season.

Picture: Murray Davidson made his first start since recovering from injury this afternoon