A controversial late goal from Aberdeen saw The Dons leave Perth with all 3 points this afternoon.

During the first half Saints came close to the opening goal when Craig Bryson’s goalward bound header was blocked by an Aberdeen defender. Whilst up the other end Zander Clark made a fine save to deny Jay Emmanuel-Thomas.

Then in the second half Chris Kane saw his header from an Ali Crawford cross rebound off the post.

The only goal of the game came with 7 minutes remaining as Teddy Jenks lashed home a low strike from the edge of the box although it appeared the on-loan midfielder had handled the ball in the build-up. It was tough on Saints who deserved at least a point from the match.

Following today’s result and coupled with Ross County coming back to defeat Dundee 3-2, Saints now find themselves bottom of the league on goal difference.

Next up for Saints is a trip to Ibrox on Wednesday evening to take on Rangers, kick off 7:45pm.

After being inactive last weekend due to the Ross County match being postponed due to a waterlogged pitch Saints were back in action this afternoon as they welcomed Aberdeen to McDiarmid Park. Callum Davidson made four changes to the team which started against Dundee 10 days ago as James Brown, Liam Craig, Craig Bryson and Glenn Middleton came in to replace Michael O’Halloran, Cammy MacPherson, Murray Davidson and Eetu Vertainen. Aberdeen defeated St Mirren 4-1 at Pittodrie last Saturday and manager Stephen Glass decided to go with the same team which started against The Buddies this afternoon.

It was a wet afternoon in Perth as Lewis Ferguson got the match underway for the visitors. Saints created the first chance of the match after 8 minutes as Ali Crawford picked up a loose ball in midfield before carrying it forward and he then played the ball into the path of Chris Kane but his strike was deflected behind for a corner by Ross McCrorie.

Then on 15 minutes Craig Bryson saw his cross in the Dons box turned behind for another corner by Scott Brown. Crawford took the corner from the left but his delivery into the box was headed clear by Jay Emmanuel-Thomas however, the clearance from the former Livingston forward only went as far as Bryson who chested the ball down before having a shot at goal which went high into the North Stand. 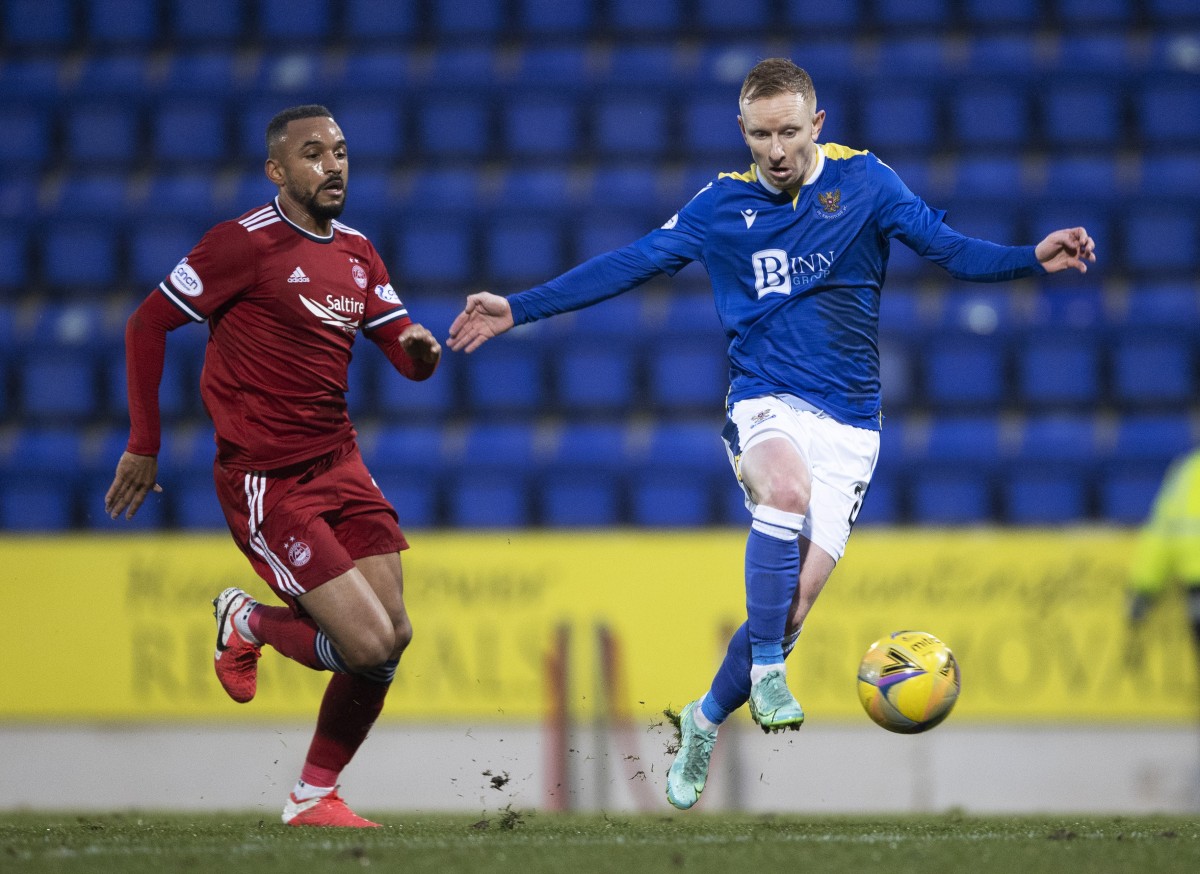 Aberdeen were also creating opportunities of their own and on 21 minutes Jamie McCart made a brilliant defensive block as he turned the ball behind for a corner. Then 3 minutes later Jonny Hayes broke down the left before picking out Emmanuel-Thomas in the centre of the box who headed the ball towards goal but Zander Clark made a brilliant finger-tip save to deny the forward.

With 10 minutes of the first half remaining a good Saints move saw Booth play a great cross into the box which Bryson got on the end of but the header from the Saints midfielder was blocked by an Aberdeen defender. 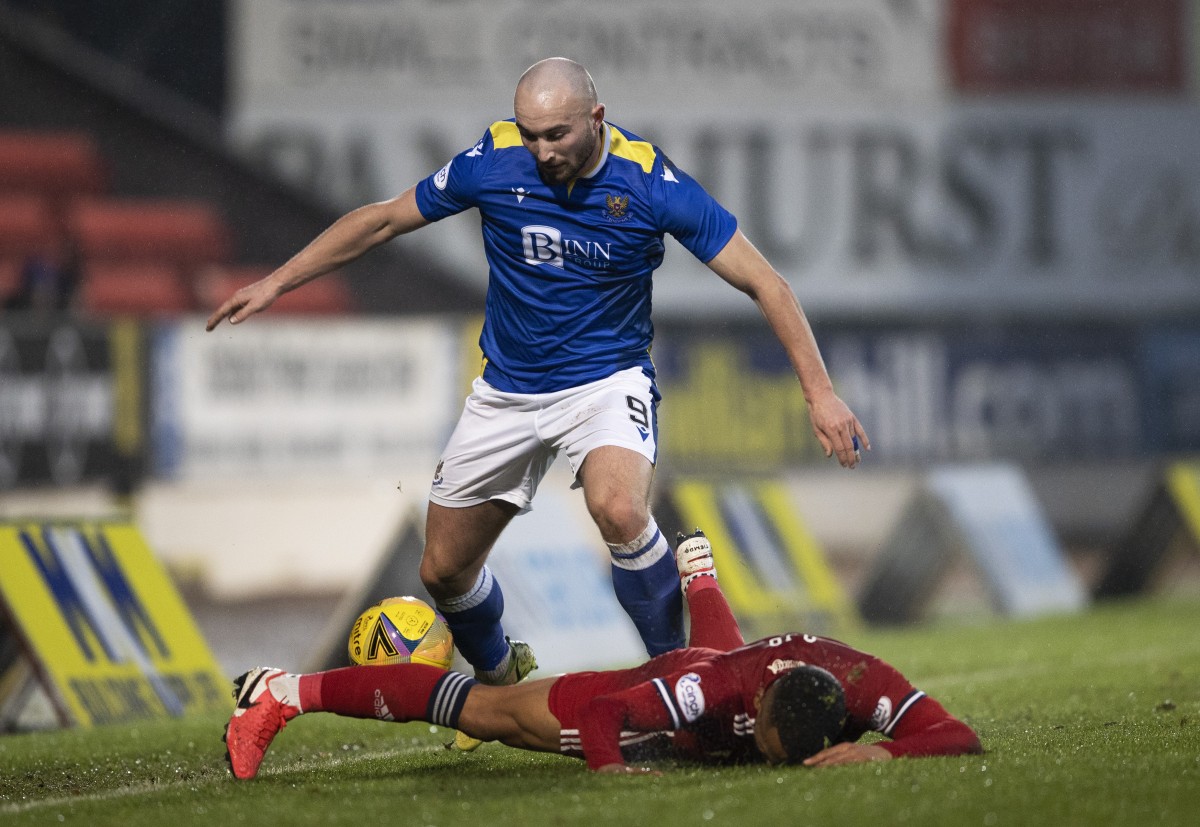 Into the second half and Joe Lewis was called into action on 55 minutes as he was at full stretch to tip a Shaun Rooney long range effort from about 30 yards behind for a corner.

Then 3 minutes later Aberdeen got a sight of goal however, Emmanuel-Thomas dragged his effort wide. The visitors created another chance on the hour mark however, Marley Watkins couldn’t make a proper connection with the ball as Clark gathered.

Saints made their first change of the game on 62 minutes as Eetu Vertainen came on to replace Glenn Middleton and he made a positive impact on the match. Within minutes of coming on the Finnish forward played a neat ball out wide to Crawford whose floated cross into the box from the right was blocked by a Dons defender. Play continued and the ball was played out wide to Crawford again and this time the midfielder’s ball into the box was met by Kane but the header from the Saints number nine crashed off Lewis’ left-hand post.

The visitors then made their first change of the game on 65 minutes as Teddy Jenks came on to replace Jay Emmanuel-Thomas. Then a minute later Ryan Hedges setup Watkins but the Welshman couldn’t direct his effort on goal. Hedges was next to have a shot at the Saints goal as he had a go from 20 yards but Clark was more than equal to the effort.

The match started to get a bit heated with players on both sides niggling away at each other and several players were booked by Greg Aitken. Watkins booked for a foul on Kane on 77 minutes and then both Shaun Rooney and David Bates were booked shortly after as they clashed at a Saints free kick.

Saints continued to press for the opener but with 7 minutes remaining the visitors took the lead. After being awarded a free kick following a foul on Lewis Ferguson by Liam Craig, Funso Ojo delivered the free kick into the box and Saints captain Liam Gordon won the ball however, it went straight to Jenks, who appeared to control the ball with his arm before despatching a low strike from 18 yards past Clark. Saints appealed to Greg Aitken that the on-loan Brighton and Hove Albion midfielder had handled the ball in the build-up but the referee dismissed the appeals. 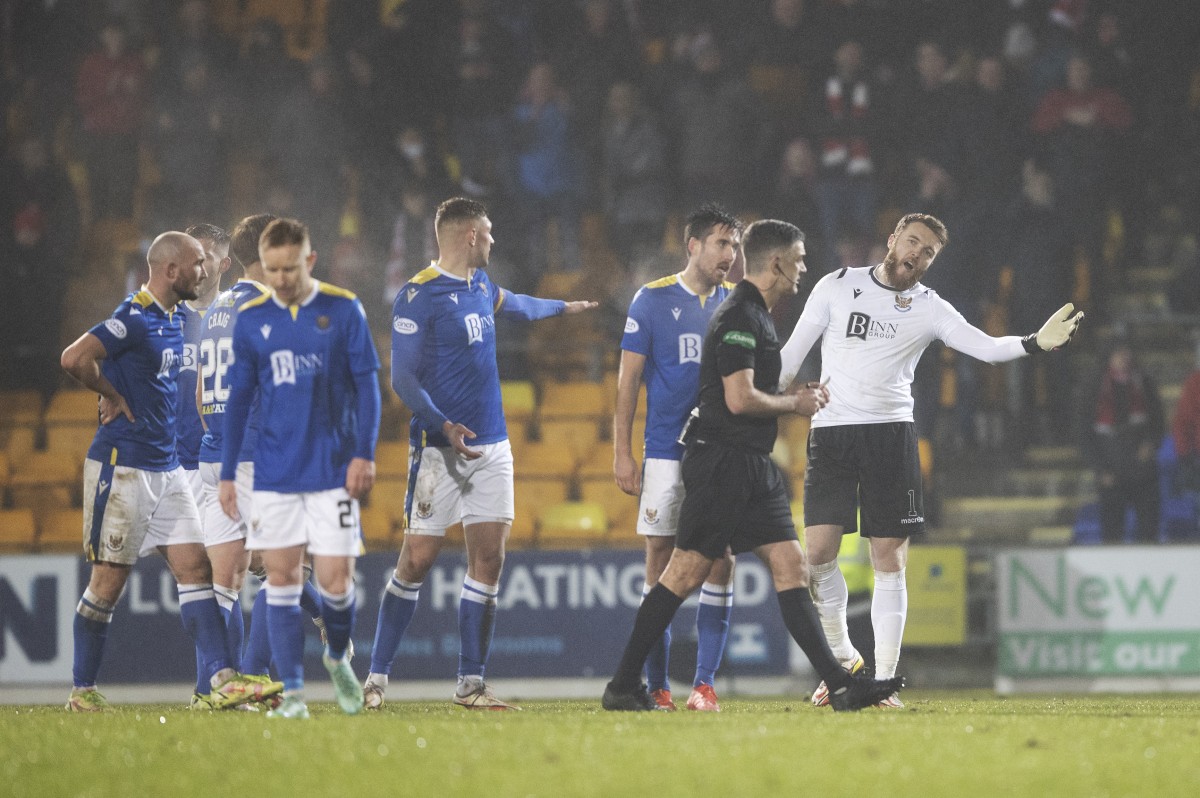 PHOTO: The Saints players protest that Teddy Jenks handled the ball in the build-up to the Aberdeen goal

Saints then made a double change on 87 minutes as Viv Solomon-Otabor and Michael O’Halloran came on to replace Ali Crawford and Shaun Rooney.

Then as the match entered 3 minutes of additional time Ramírez almost scored a second goal for the visitors as his audacious effort from 25 yards hit the side netting as Saints couldn’t find a way back into the game.