A second half goal from Peter Pawlett saw Saints lose 1-0 to Dundee United at McDiarmid Park this afternoon.

The only goal of the game came on the hour mark as Pawlett slotted the ball past Zander Clark from close range. The Dundee United midfielder was then booked for celebrating with the visiting fans in the North Stand.

Pawlett’s afternoon was then brought to a premature end with 12 minutes remaining as he was sent off after picking up a second booking for diving.

Saints pushed for an equaliser in the closing stages but the United defence stood firm as they saw the game out to secure the win.

After securing a 1-1 draw against LASK in the first leg of their UEFA Europa Conference League play-off in Austria on Thursday evening, Saints returned to league action this afternoon as they welcomed Dundee United to McDiarmid Park. Callum Davidson made two changes to the side that started in Klagenfurt 3 days ago as Hayden Muller and Stevie May came in to replace Liam Gordon, who dropped out completely, and Michael O’Halloran who dropped to the bench. Dundee United progressed to the quarter-finals of the Premier Sports cup last Saturday as they defeated Championship side Ayr Utd 4-3 on penalties after United had come from behind to get a 1-1 draw at Somerset Park and Head Coach Thomas Courts made three changes to his starting eleven for today’s match. Benjamin Siegrist, Ian Harkes and Darren Watson dropped out and they were replaced by Trevor Carson, Dylan Levitt and Marc McNulty.

Stevie May got the match underway for Saints and it was the hosts who created the first chance of the game. Shaun Rooney’s long throw into the United box was headed on by Jason Kerr and Chris Kane was able to head the ball towards goal which had Trevor Carson scrambling across his goal but the header from the Saints number nine went wide.

The first corner of the game came on 8 minutes after May had done well to hold up a long ball forward by Rooney. McCann took the corner and he played it to Callum Booth on the edge of the box however, his right footed effort was gathered by Carson.

It was a lively opening to the match and a minute later Dundee United got their first chance as Liam Smith’s long ball forward was flicked on by Marc McNulty to Nicky Clark but his effort was comfortably saved by Zander Clark. The Tannadice side created another chance shortly after as Adrián Spörle’s cross from the left was met by McNulty but the header from the on-loan Reading forward was well held by Clark.

The large travelling support were making plenty of noise and the visitors created another opportunity on 12 minutes as Smith played in Dylan Levitt but Clark made a good save to deny the on-loan Manchester United midfielder.

Just after the half an hour mark Rooney cut in from the right and decided to have a go from distance which almost paid off however his fizzing long range effort went wide of the far post. Rooney was looking dangerous down the right and on 43 minutes he showed great skill to skip past two United players before sending over an inviting cross into the box which May was inches away from making connection with. 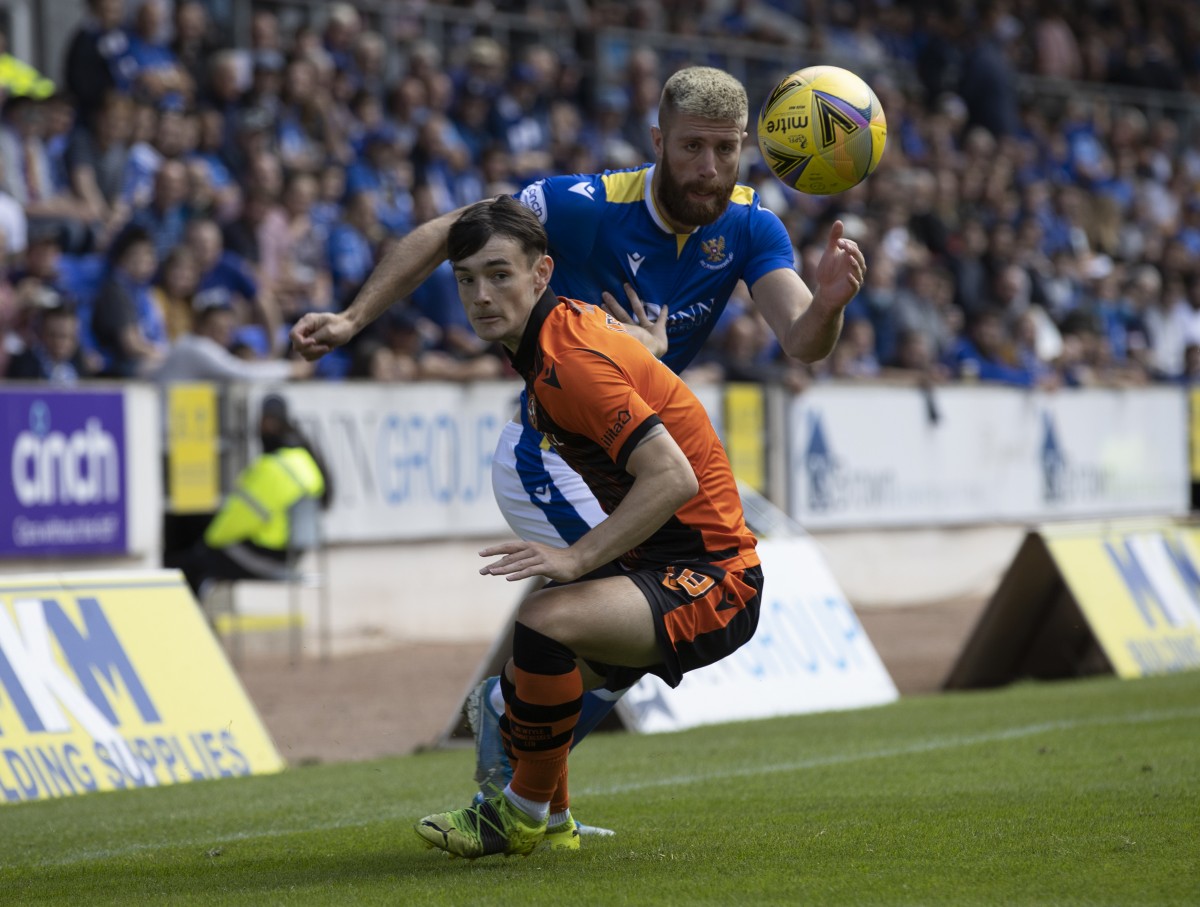 A Peter Pawlett corner from the left on 51 minutes for The Terrors picked out Charlie Mulgrew at the back post but the Dundee United captain flashed his header wide.

The visitors made a strong start to the second half however, a good move by Saints on 55 minutes saw Rooney feed a pass down the right channel to Glenn Middleton who carried the ball to the byline before cutting it back as he picked out May in the box but Smith slid in to make a vital block as United cleared the danger.

A long ball forward by Clark on 57 minutes played in McNulty, who got in-between Jason Kerr and Shaun Rooney but Zander Clark was able to gather the tame effort from the United striker.

Dundee United were rewarded for their good start to the half as they took the lead on the hour mark as Pawlett latched onto a Nicky Clark flick on to poke the ball past Zander Clark from close range. That sparked celebrations in the North Stand behind the goal and Pawlett was booked for celebrating among the United fans.

Saints made a double change on 69 minutes as Callum Hendry and Michael O’Halloran came on to replace Stevie May and Hayden Muller.

Tam Courts side were then reduced to ten men with 12 minutes remaining as Pawlett picked up a second booking after the midfielder was deemed to have dived by referee Don Robertson after coming under pressure from Murray Davidson. 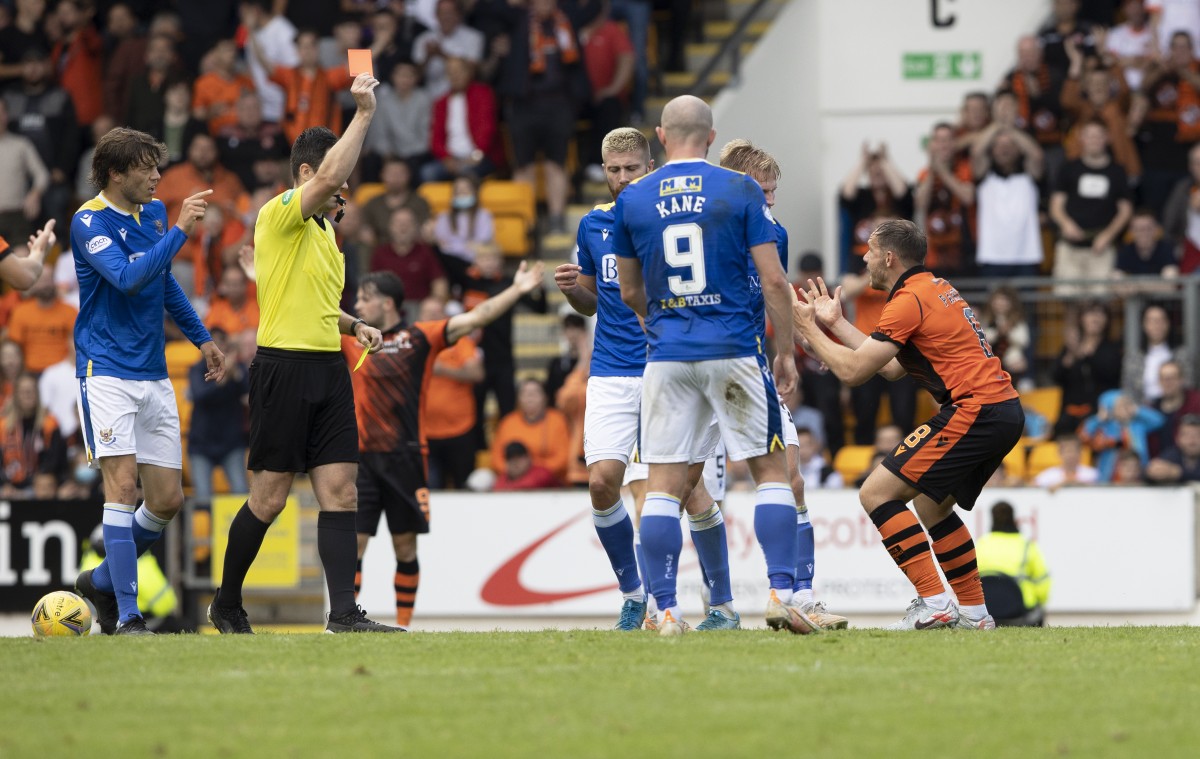 PHOTO: Peter Pawlett is sent off after picking up a second booking for diving

Saints pushed for an equaliser and on 81 minutes Carson made a good save to deny Middleton. Then on 87 minutes Ali McCann’s delivery into the box picked out substitute Liam Craig however, the header from the midfielder was comfortably gathered by Carson.

The Tannadice side were looking dangerous on the counterattack but in the final minute of the ninety Saints were awarded a free kick on the edge of the box after Davidson had been fouled by Jeando Fuchs. Middleton took the free kick but his low effort was blocked by McNulty who was lying on the ground behind the United wall before the visiting defence cleared the danger. 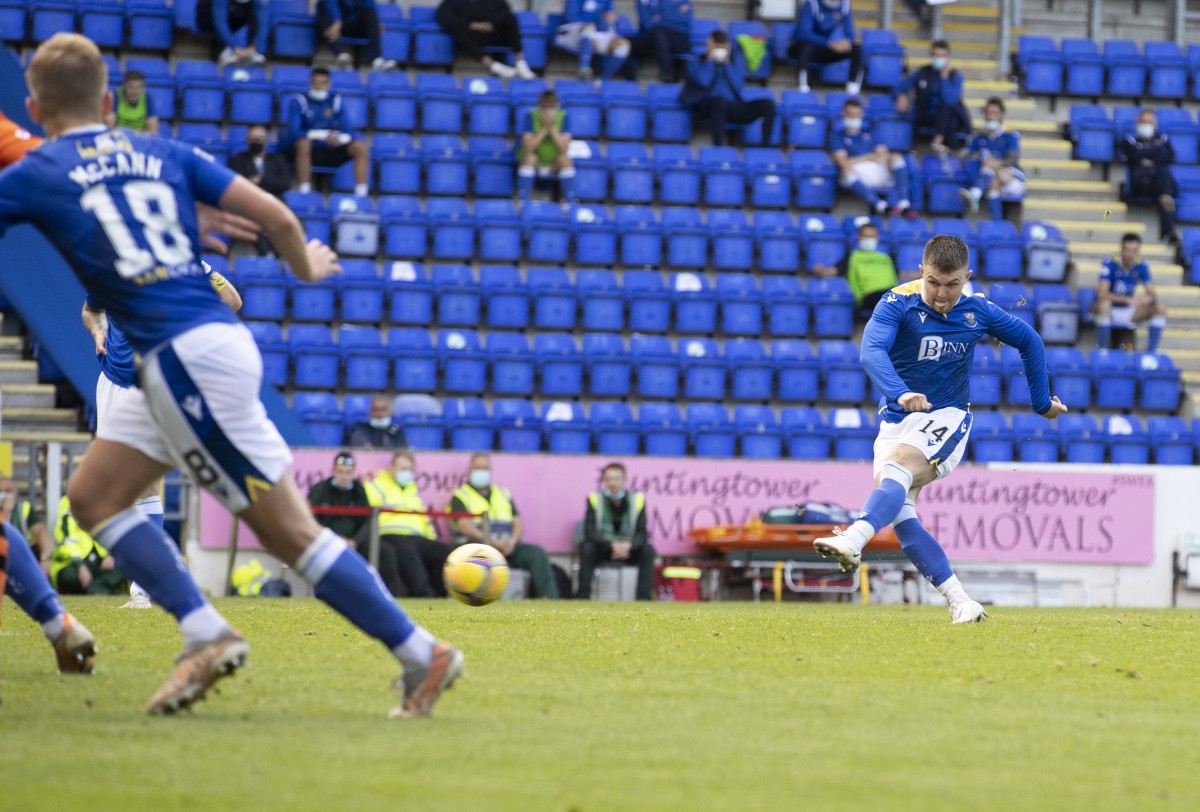 Saints continued to push as 5 minutes of stoppage time were added on and deep into stoppage time Jamie McCart’s long ball into the danger area was met by Rooney but Carson was able to gather was United held on to leave Perth with all 3 points.