The only goal of the game came after 3 minutes as Alfredo Morelos flicked the ball into the path of Kamara who coolly slotted his strike beyond Saints keeper Elliott Parish.

The closest Saints came to an equaliser was a Jacob Butterfield effort which Allan MacGregor saved at the second attempt.

Next up for Saints is a trip to Edinburgh to take on Hibs on Saturday at Easter Road, kick off 3pm.

After going down 3-1 to Ross County at the weekend Saints were back in action this evening as they welcomed Rangers to McDiarmid Park. Callum Davidson made two changes to the side which started in Dingwall at the weekend as James Brown and Nadir Çiftçi came in to replace Dan Cleary, who dropped to the bench, and Glenn Middleton who couldn’t play against his parent club. Rangers let a two goal half time lead slip against Motherwell on Sunday as second half goals from Jordan Roberts and Kaiyne Woolery saw the Fir Park fight back to earn a point at Ibrox. Manager Giovanni van Bronckhorst made one change to his starting eleven this evening as Fashion Sakala dropped to the bench and he was replaced by Leon Balogun.

Alfredo Morelos got the match underway for the visitors and the Ibrox side would find themselves a goal up after 3 minutes. Connor Goldson played a long ball and Morelos flicked the ball into the path of Glen Kamara and the Finnish internationalist coolly slotted the ball beyond Elliott Parish to give Rangers an early lead.

Saints didn’t let that early goal affect their confidence and they forced a couple of corners as they looked to get back into the match and it was from one of these corners that they got a good chance to level the match. On 18 minutes Jacob Butterfield’s corner from the right was cleared only as far as the unmarked Jamie McCart but the defender couldn’t direct his effort on target.

Play then quickly switched to the other end as a good move by the visitors saw Scott Arfield break into the box but his effort was blocked by Tony Gallacher and Liam Gordon and the ball broke to Morelos and he almost made it two as his powerful strike from a tight angle came back off the post. Then a minute later Calvin Bassey went on a driving run forward before unleashing a strike from distance which didn’t trouble Parish. 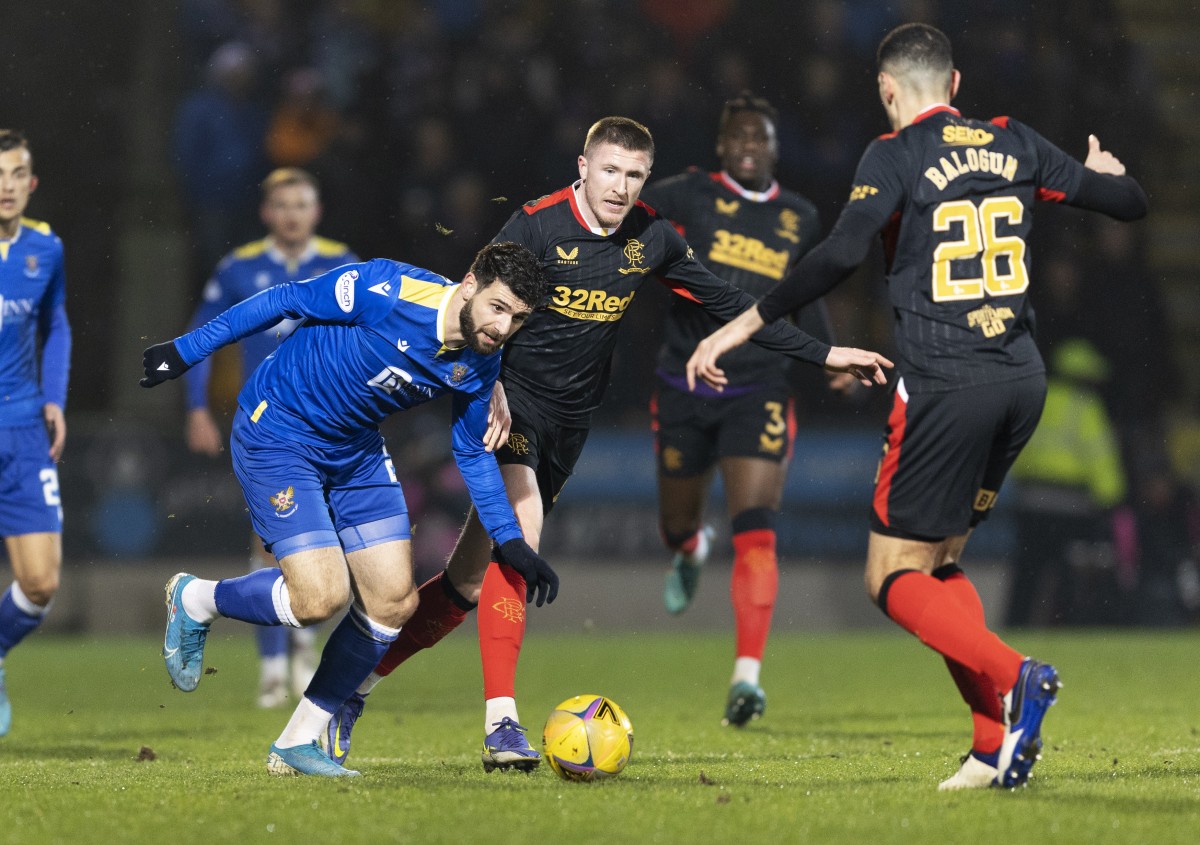 Saints were pressing well and on 42 minutes a good cross field pass by Ali Crawford played in Tom Sang and he played the ball into the path of Butterfield whose curling effort was saved by Allan McGregor as The Gers keeper gathered the ball at the second attempt.

Then a minute later another good passing move by the visitors saw Arfield played in by Morelos but the midfielder saw his effort didn’t trouble Parish with his effort as it went high into the Ormand Stand. Then just before half time Morelos turned provider again, this time setting up Kent who fired over from just inside the box.

Rangers started the second half strongly and on 51 minutes a Kent cross from the left was met by Morelos but the header from the Colombian forward was well held by Parish. The Gers got another sight of goal shortly after as Joe Aribo unleashed a left footed effort but it was a comfortably save for Parish.

Determined play by Aribo on 58 minutes saw the midfielder force his way to the edge of the Saints box, he then slipped the ball to his right, playing in Arfield who unleashed a strike which went narrowly wide. 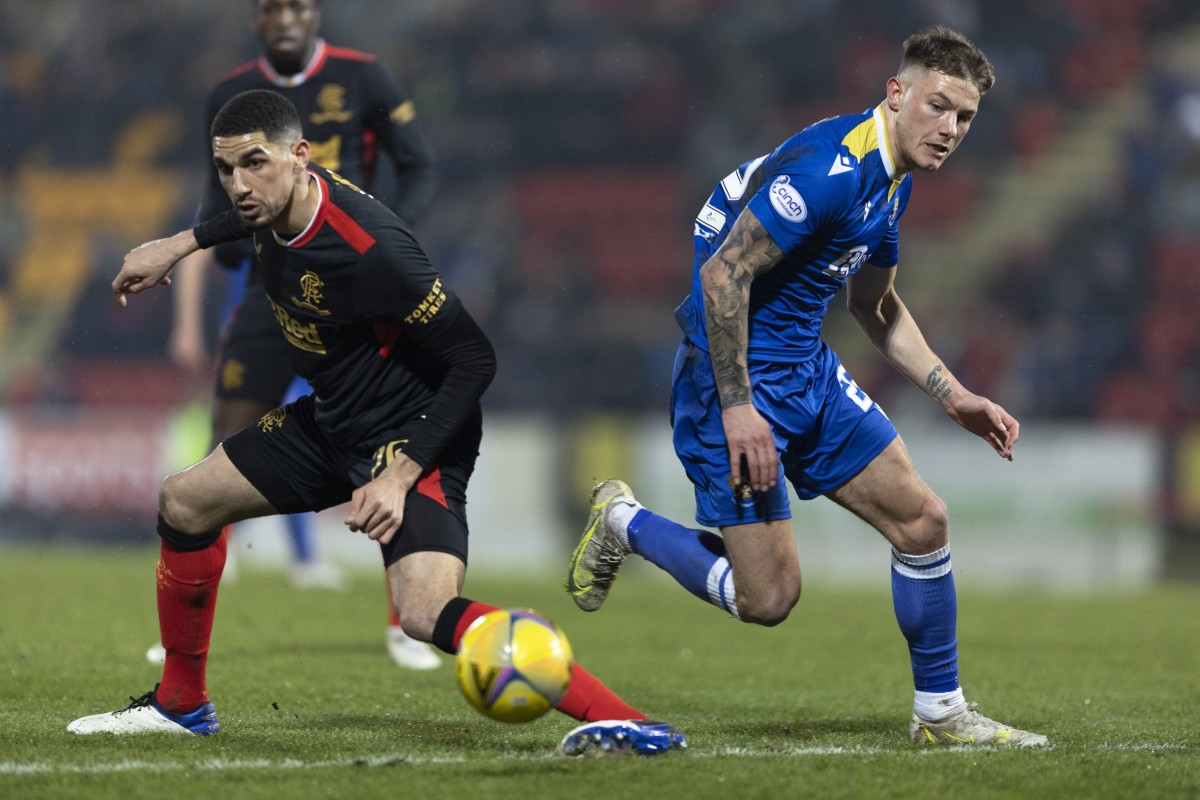 The Ibrox side did have the ball in the net on 69 minutes after they were awarded a free kick following a foul by Sang on Bassey. James Tavernier took the free kick and his ball into the danger area was met by Connor Goldson who powered a header past Parish however, the goal was chalked off for offside.

Saints then got a chance at the other end as the ball was sent forward. It looked like Tavernier was going to comfortably deal with the danger however, his header back to McGregor was short as great chasing down by Ali Crawford saw the Saints midfielder get to the ball before the Rangers number one but unfortunately Tavernier was able to recover and get back to clear the danger. 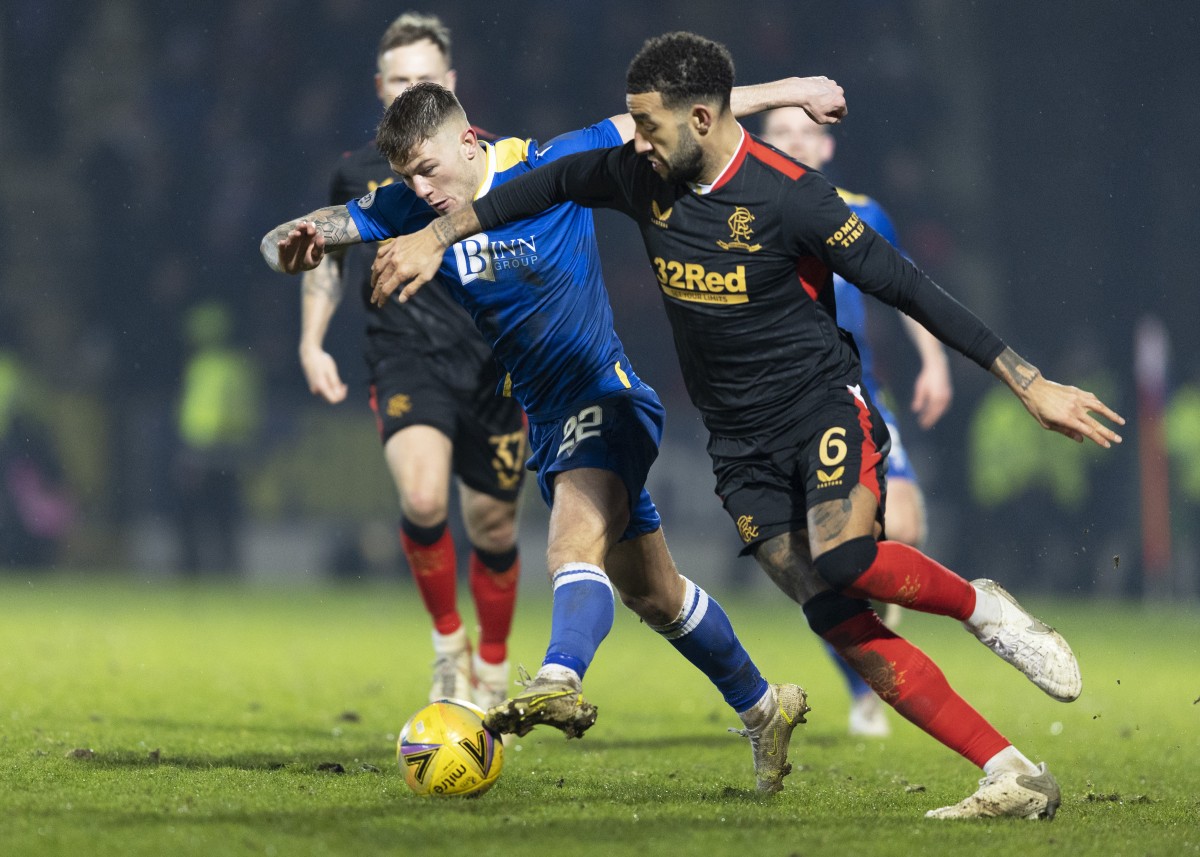 Saints then made some attacking changes with as Stevie May and Cammy MacPherson were introduced into the action, replacing Nadir Çiftçi and Ali Crawford. That was followed by a double change with 6 minutes remaining as Theo Bair and Michael O’Halloran were brought on to replace Callum Hendry and Melker Hallberg.

The closing stages saw the visiting support starting to feel anxious that they couldn’t put the game to bed however, the Rangers defence stood firm and comfortably mopped up late Saints pressure to ensure that they left Perth with all 3 points.