Saints missed out on the opportunity to close the gap on tenth placed St Mirren this afternoon as they lost 1-0 to The Buddies at McDiarmid Park.

Saints best chance of the first half fell to Callum Hendry but he dragged his effort narrowly wide.

The only goal of the game came on 53 minutes as Greg Kiltie clinically converted an Alex Grieve cut-back to give the visitors the lead.

Callum Davidson rolled the dice during the second half as he made changes but Saints best chance of an equaliser fell to Jamie McCart in injury time but he couldn’t direct his header on target.

The result leaves Saints in eleventh place in the cinch Premiership, 5 points clear of bottom club Dundee but 8 points behind Aberdeen and St Mirren with 3 games remaining.

Next up for Saints is a trip to West Lothian next Saturday to take on Livingston at the Tony Macaroni Area, kick off 3pm.

Saints welcomed St Mirren to McDiarmid Park this afternoon for a cinch Premiership match. A second half Shaun Rooney header saw Saints get a point at Dundee last Saturday and Callum Davidson made one change to his starting eleven for today’s match as Tom Sang came in to replace Dan Cleary who dropped to the bench. St Mirren lost 1-0 at home to Hibs last weekend and manager Stephen Robinson made three changes to his starting eleven. Greg Kiltie, Alex Gogić and Alex Grieve came in to replace Alan Power, Ethan Erhahon and Eamonn Brophy who all dropped to the bench.

It was a wet afternoon in Perth as Greg Kiltie got the match underway for the visitors and The Buddies created the first chance of the game after 27 seconds. Alex Grieve was played in but Zander Clark made a strong save with his left hand to deny the New Zealand forward. It was a strong start from the Paisley side and shortly after Kiltie saw his strike blocked in the Saints box.

The early pressure on the Saints goal continued and on 8 minutes Richard Tait saw his strike from 25 yards go wide. 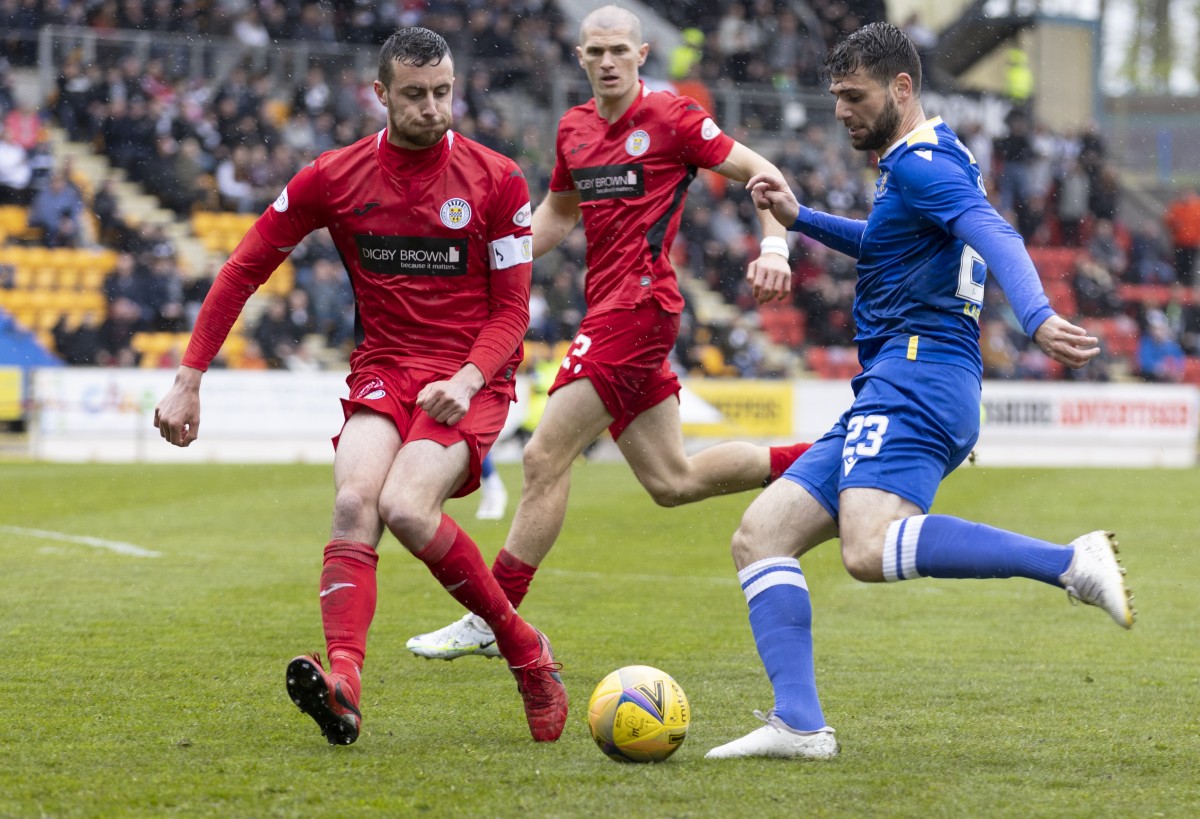 PHOTO: Nadir Çiftçi is closed down by Joe Shaughnessy

The Buddies were then awarded a free kick in a promising position on 13 minutes after Curtis Main was fouled by Jamie McCart. Alex Gogić took the free kick but his effort hit the Saints wall. The ball then broke to the midfielder but he dragged his strike narrowly wide of Clark’s right-hand post.

Saints weathered the early pressure from the visitors and on 22 minutes good play by Tom Sang saw Saints awarded their first corner of the match. Ali Crawford took the corner from the right and his delivery was only cleared as far as Callum Booth who sent the ball back into the St Mirren box and it broke to Callum Hendry who showed great skill to turn his man before dragging his effort inches wide of the post.

Then 4 minutes later Curtis Main, whose physicality was causing problems for Saints, got in behind the Saints defence as he broke into the box but Liam Gordon got back and made an excellent tackle to deny The Buddies forward. 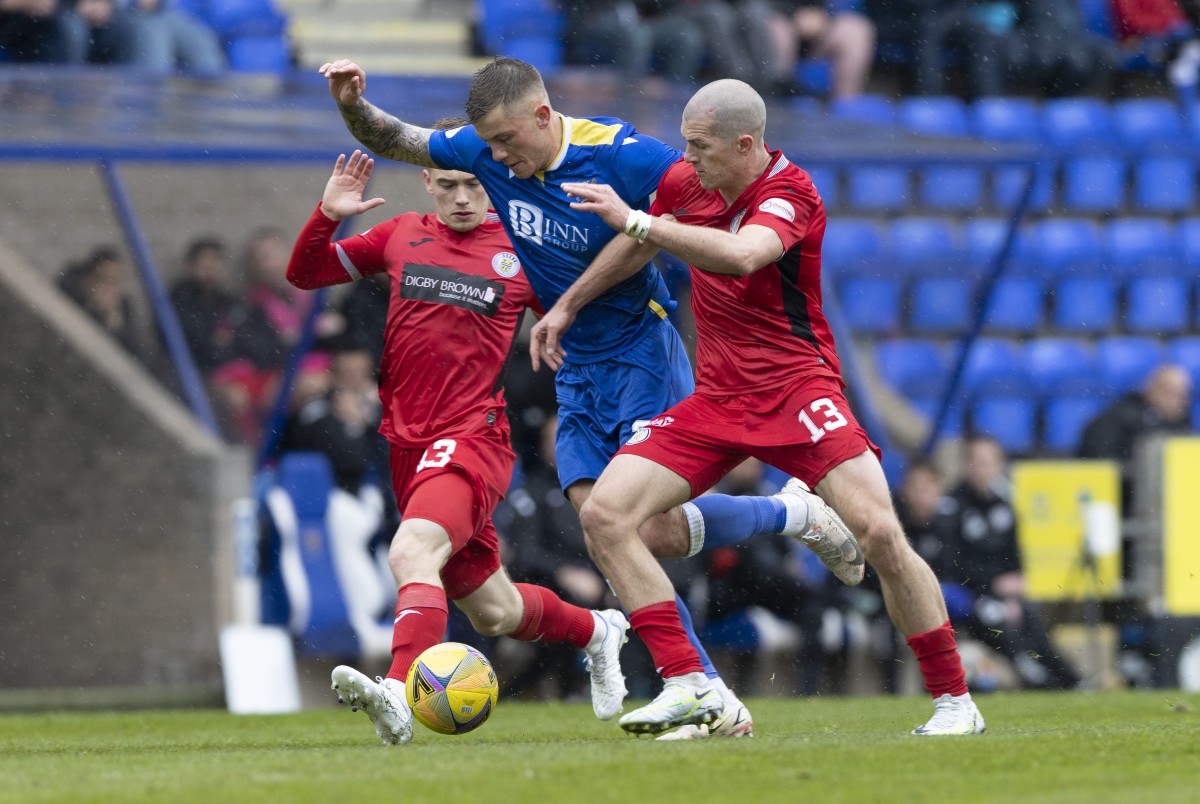 After a goalless first half, the breakthrough came on 53 minutes as the visitors took the lead. Gogić broke forward and he then fed the ball into Grieve who raced to the byline before cutting the ball back to Kiltie who made a good run to get on the end of it to guide the ball past Clark.

Saints then made a double change as Glenn Middleton and Cammy MacPherson came on to replace Ali Crawford and Tom Sang. 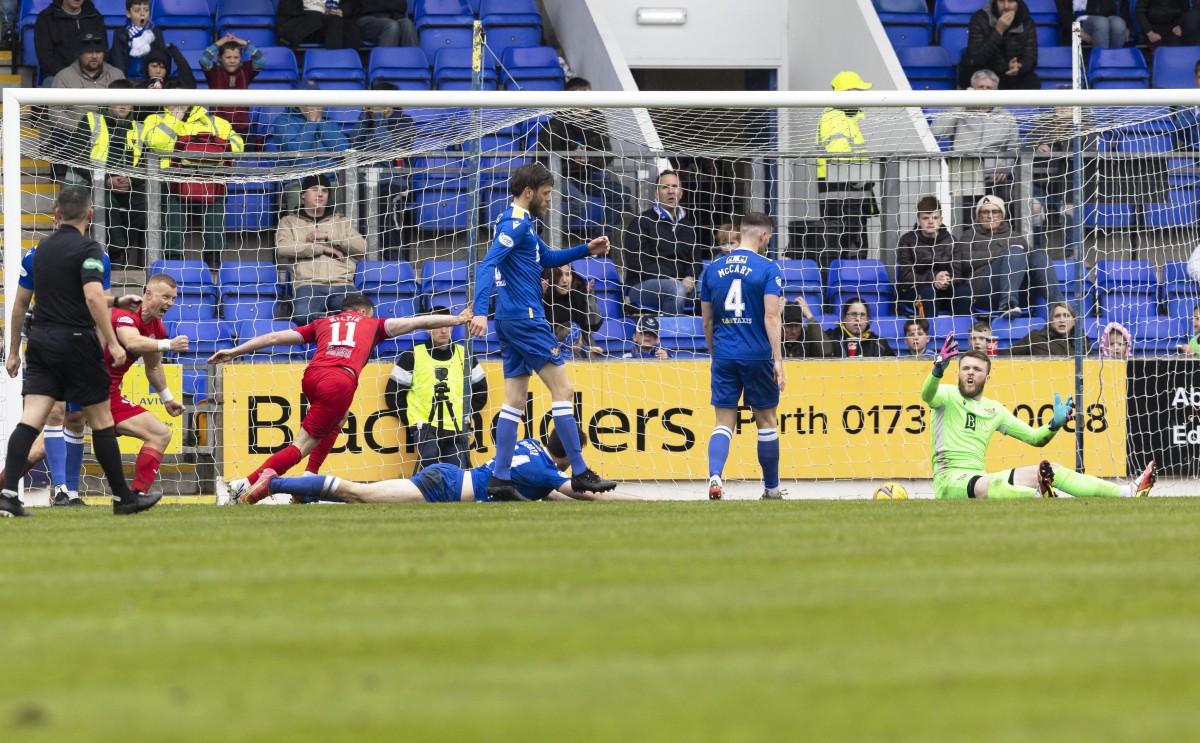 Saints continued to look for an equaliser and on 69 minutes Middleton pulled his effort narrowly wide.

Callum Davidson then made another double change as Theo Bair and Stevie May came on to replace Nadir Çiftçi and Murray Davidson.

The visitors though continued to create opportunities of their own and on 84 minutes a Scott Tanser free kick was headed behind for a corner by Gordon and then shortly after Main had a strike at goal however, his effort was straight at Clark who comfortably gathered.

4 minutes of additional time was added on at the end and a minute into additional time Hendry won a free kick after he had been fouled by Richard Tait, who was booked for the foul. MacPherson took the free kick but his delivery into the box was turned behind for a corner by Joe Shaughnessy. Clark came up for the corner as it was delivered in from the right by MacPherson. McCart got on the end of the delivery however, he couldn’t direct his effort on target as the Buddies comfortably coped with the late flurry from Saints to head back down the road with all 3 points.