Saints European dream came to an end this evening as LASK defeated Callum Davidson’s side 3-1 on aggregate to progress to the group stages of the UEFA Europa Conference League.

Husein Balić gave the visitors the lead on 72 minutes as he blasted the ball high past Zander Clark.

Saints were then reduced to ten men as David Wotherspoon was sent off within a minute of coming on as a substitute, before Shaun Rooney was also given his marching orders as he conceded a penalty for a last man challenge on Balić. Marko Raguž despatched the penalty to seal the win for the Austrian side.

Next up for Saints is a trip to Paisley on Sunday to take on St Mirren, kick off 3pm.

Saints welcomed LASK to McDiarmid Park this evening for the second leg of their UEFA Europa Conference League Play-off. There were two changes to the Saints team which started the 1-0 defeat to Dundee United on Sunday as Hayden Muller and Stevie May both dropped to the bench and they were replaced by James Brown and Michael O’Halloran. LASK came from behind to draw 1-1 with TSV Hartberg on Sunday afternoon and Head Coach Dominik Thalhammer made four changes to his team for tonight’s important play-off match. Philipp Wiesinger, Thomas Goiginger, Keito Nakamura and Florian Flecker came in to replace Jan Boller, Marvin Potzmann Alexander Schmidt and Husein Balić.

It was a glorious sunny evening in Perth as Peter Michorl got the match underway for the visitors and they created the first chance of the match after 3 minutes. Hyon-Seok Hong created space for himself in the middle of the park and he travelled past a couple of Saints players and into the box but Zander Clark made a good save at his near post as he turned the ball behind for a corner.

Saints though settled into the match and on 20 minutes Murray Davidson went on a mazy run down the right to win Saints a corner. It was taken by Glenn Middleton and his delivery from the right caught out LASK keeper Alexander Schlager and the ball broke to Jason Kerr at the back post however, the Saints captain didn’t know much about it as the ball hit off the back of his head and went inches wide.

Saints were holding their own as LASK struggled to deal with the physical side of the game and Chris Kane did well to win Saints a free kick in a promising position. It was taken by Middleton and he whipped his cross into the box as he tried to pick out Chris Kane but Andres Andrade did well to turn the ball behind for a corner. 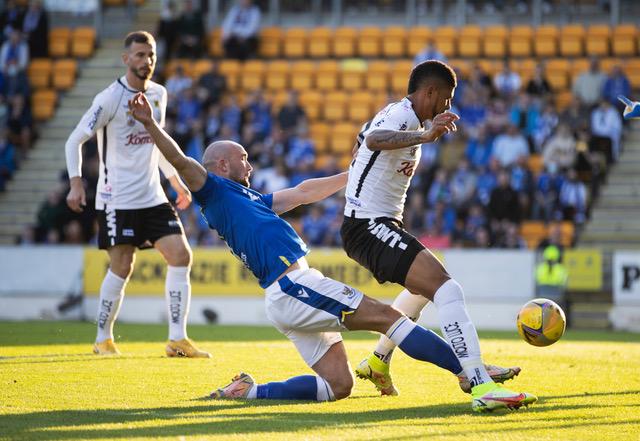 However, just before half time Saints fans had their hearts in their mouths as French forward Mamoudou Karamoko got past Jamie McCart and broke to the byline before sending over an excellent cross however, luckily for Saints no one in a LASK shirt was able to get on the end of it.

Just like the first half LASK started the second half strongly and 3 minutes into the half they created a good chance to break the deadlock. A long throw-in from the right broke to Peter Michorl and the midfielder chested the ball down before unleashing a shot but Clark made an excellent save as the Saints number one got a strong hand to it.

On 56 minutes another long throw-in from LASK broke to Hyon-Seok Hong but Clark again made a fine save to keep the score level. Then shortly after Michorl played in Thomas Goiginger but he blasted wide.

The Black-Whites were causing problems for Saints and they got another sight of goal on 64 minutes but substitute Husein Balić couldn’t direct his effort on target.

With the crowd behind them Saints then created a couple of chances of their own 2 minutes later as Middleton saw his effort blocked and the loose ball was gathered by Ali McCann but the Northern Ireland internationalist also saw his strike blocked. The ball continued to bounce around the LASK box and Middleton latched onto it but again the LASK defence blocked the effort from the on-loan Rangers winger.

Saints continued the pressure and 3 minutes later Middleton was played in by Kane and he forced Schlager to make a good save. 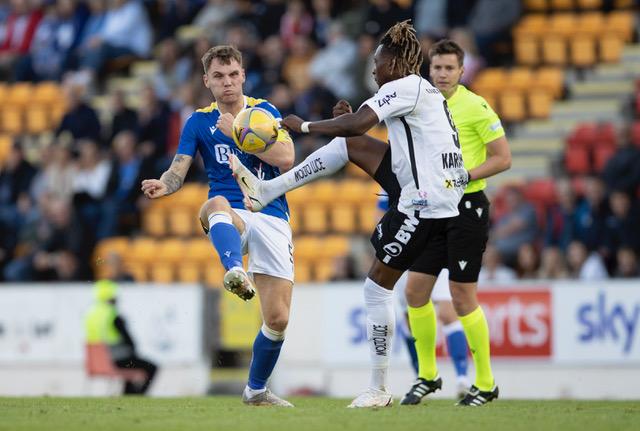 PHOTO: Jason Kerr and Mamoudou Karamoko challenge for the ball

However, Saints suffered a blow on 72 minutes as the ball broke to Husein Balić in the box and the substitute blasted the ball high into the net to give the visitors the advantage.

Saints responded by introducing David Wotherspoon into the action as he came on to replace James Brown. However, within a minute of coming on Wotherspoon was sent off for an elbow challenge on Florian Flecker.

Despite being a man down Saints still pressed on in search of an equaliser and Kane did well to win Saints a free kick deep in the LASK half on 82 minutes. Middleton stepped up to take it but his delivery into the box was gathered by Schlager who came out well to gather.

Play then quickly switched to the other end as Balić broke into the Saints box and he was dragged to the ground by Rooney. After a bit of a hesitation referee Daniel Siebert pointed to the spot and sent off Rooney to reduce Saints to nine men. Substitute Marko Raguž stepped up to take the penalty and he despatched it low into the left corner to seal the win for the hosts and end Saints European campaign for this season.