Defensive errors cost Saints this afternoon as Livingston left Perth with all 3 points.

The Lions took the lead after 3 minutes as on-loan Birmingham City midfielder Odin Bailey guided the ball into the far corner of the net.

Then on 29 minutes Bruce Anderson latched on to a loose ball after a defensive mix-up between Zander Clark and Jamie McCart and the forward slotted the ball home from the edge of the box.

Another defensive mix-up in the second half saw Livingston score a third goal. Efe Ambrose and Michael O’Halloran collided in the box and the ball broke to Bruce Anderson who picked out Scott Pittman and the midfielder converted from close range to end the game as a contest.

Next up for Saints is a trip to Celtic Park next Saturday to take on Celtic, kick off 3pm.

Following last weekend’s international break, Saints returned to action this afternoon as they took on Livingston at McDiarmid Park. Last time out Saints defeated Dundee 3-1 and Callum Davidson made two changes to his team for this afternoon’s match as Jamie McCart and Cammy MacPherson came in to replace Lars Dendoncker and Ali Crawford. Prior to the international break Livingston lost 1-0 at home to St Mirren and manager David Martindale made four changes to his starting eleven this afternoon. Nicky Devlin, Scott Pittman, Christian Montaño and Bruce Anderson came in to replace Jack McMillan, Jackson Longridge, Alan Forrest and Andrew Shinnie.

Prior to kick off there was a presentation to Liam Craig as the midfielder was presented with a framed shirt to mark his record breaking 442nd appearance for Saints against Dundee a fortnight ago to become the club’s all-time appearance record holder. 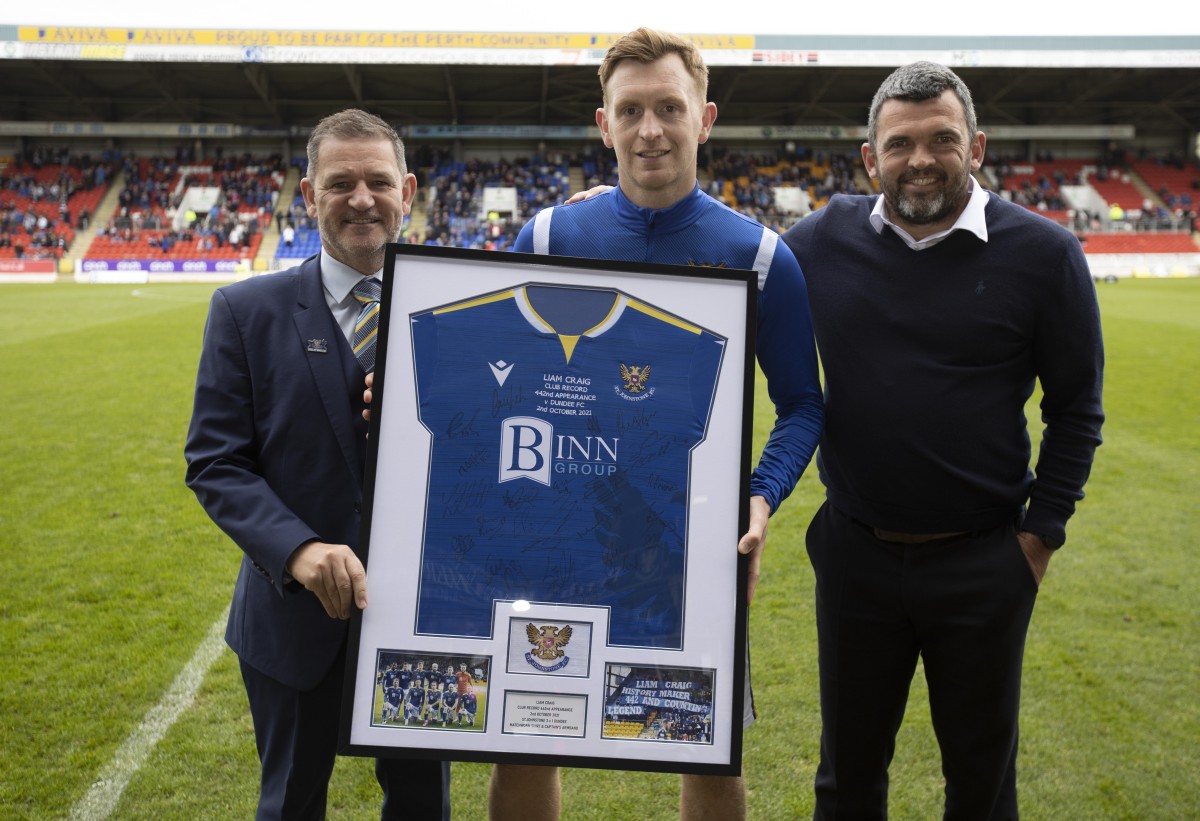 PHOTO: A special presentation to Liam Craig of the shirt he wore during his 442nd record club appearance by Chairman Steve Brown and Manager Callum Davidson

Jason Holt got the match underway for the visitors and they would create the first chance of the match after 2 minutes.  Scott Pitman’s deflected strike fell to Christian Oméonga who headed the ball towards goal but Zander Clark made a fantastic save.

It was a lively start by the visitors and a minute later they took the lead as Bruce Anderson picked out Odin Bailey and the on-loan Birmingham City midfielder slotted a low effort into the bottom corner of the net.

Saints though quickly regrouped and they were almost level on 6 minutes as Cammy MacPherson’s deep corner from the right picked out the unmarked Liam Craig who took a touch before seeing his looping volley hit the crossbar.

Saints continued to search for an equaliser and on 17 minutes another deep corner from the right by MacPherson was met at the back post by Efe Ambrose however, the defender saw his header go inches wide.

Saints were picking up a bit of momentum going forward however, they suffered a setback on 22 minutes as Shaun Rooney picked up an injury and had to be replaced by Lars Dendoncker. 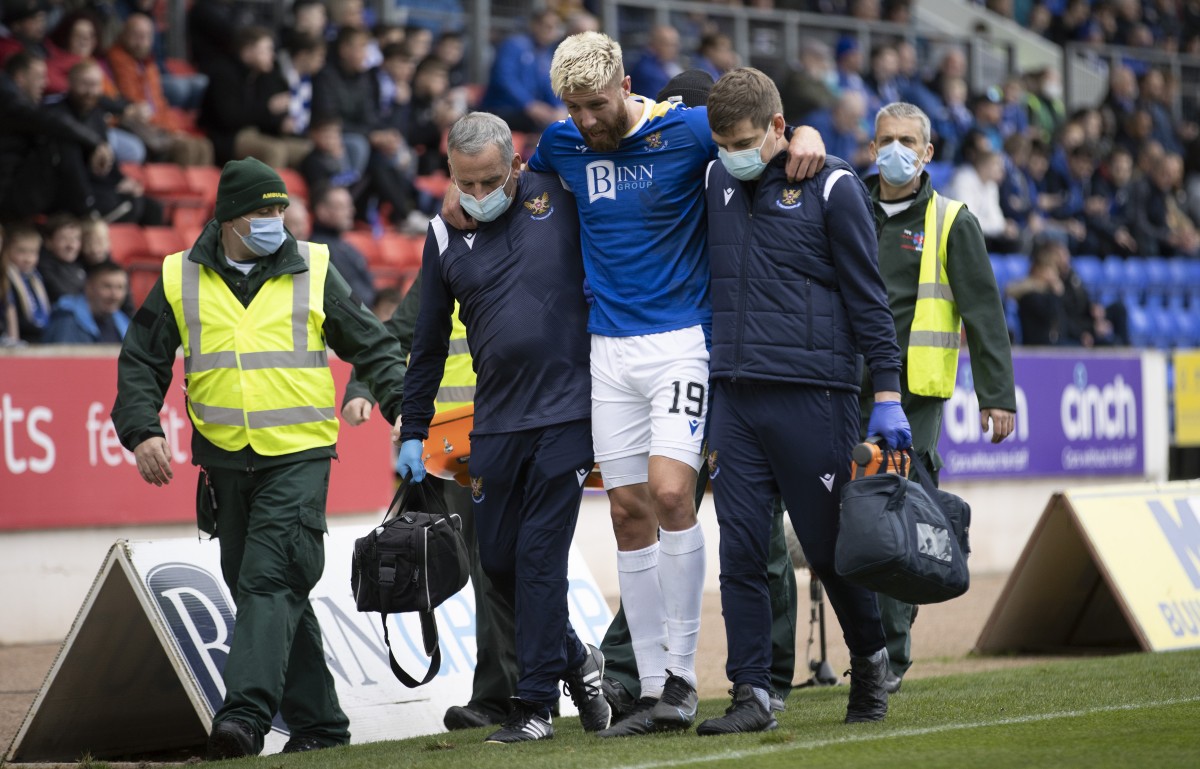 PHOTO: Shaun Rooney is carried off the pitch after picking up an injury

However, Saints afternoon got even tougher just before the half an hour mark as Livingston double their lead. Clark played a clearance out to Jamie McCart however, Clark’s clearance hit off the back of McCart’s heel and Anderson reacted quickest to the loose ball as he guided a low effort into the corner of the net.

On 39 minutes Livi hit Saints on a quick counter-attack as Bailey broke down the right before playing in Stephane Oméonga but the Belgian midfielder put his effort wide from 20 yards.

Before the second half could get underway Livingston made a change as Jackson Longridge came on to replace James Penrice.

4 minutes into the second half Michael O’Halloran won Saints a corner. MacPherson took the corner from the right and his delivery was met by Ambrose but the header from the Nigerian defender went wide.

Then a minute later played switched to the other end as Bailey played in Anderson but McCart made a good block as he turned the ball behind for a corner. 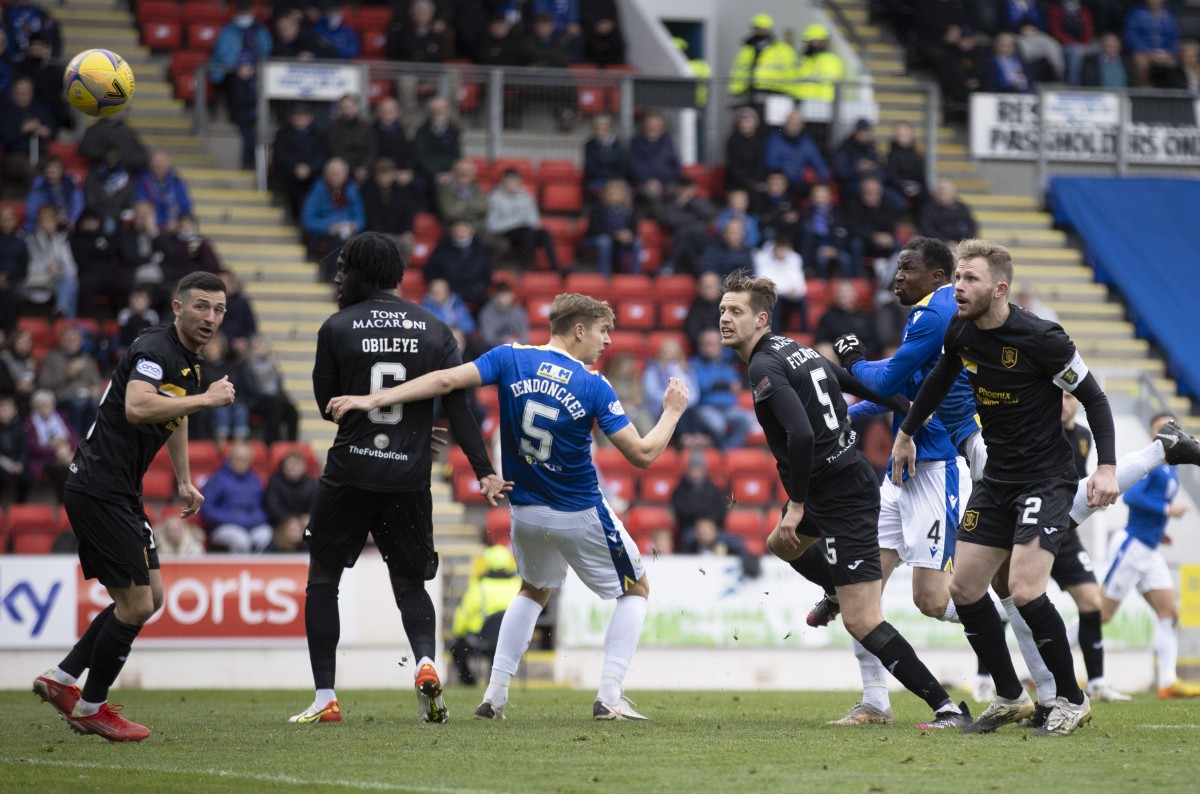 Saints forced several corners early in the second half and a MacPherson corner on 52 minutes was met by Ambrose however, this time his header was cleared off the line.

Saints made their second change of the game on 63 minutes as Glenn Middleton came on to replace David Wotherspoon.

However, Livingston got a third goal on 66 minutes and it came as a result of a lack of communication between O’Halloran and Ambrose as they collided in the box. With both players lying on the ground, Anderson latched onto the loose ball and cut it back to Scott Pittman who converted from close range.

Before the game could restart both O’Halloran and Ambrose required treatment and Saints had to make a change as the former was replaced by James Brown.

It was proving to be an afternoon to forget for Saints and on 72 minutes The Lions came close to a fourth goal. Ayo Obileye sent over a deep cross from the right which Bailey got on the end of but luckily for Saints the midfielder saw his header go narrowly wide.

Then a minute later Max Stryjek made a fantastic save to deny Chris Kane as he tipped the striker’s header over for a corner. It was a good spell by Saints as shortly after Stevie May was denied from close range by the Polish keeper.

Saints continued to plug away as they tried to get a consolation and with 9 minutes remaining Middleton saw his powerful strike deflected behind for another corner from which McCart’s header landed on the roof of the net. Then on 85 minutes May setup Craig however, the curling effort from the midfielder didn’t trouble Stryjek.

The Lions came close to a fourth deep into the 4 minutes of additional time as substitute Craig Sibbald played in Alan Forrest and the midfielder cut inside before curling inches wide of Clark’s right-hand post.