Saints will face either Arbroath or Inverness CT in the cinch Premiership play-off final after they beat Aberdeen 1-0 this evening at McDiarmid Park to secure eleventh place and relegate Dundee.

The only goal of the game came on 17 minutes as Callum Hendry converted a Glenn Middleton cutback from the by-line.

Saints could have doubled their advantage in the second half however, Shaun Rooney’s header at the back post from a Melker Hallberg corner went inches over.

Next up for Saints is a trip to the capital on Sunday to face Hibs for their final league game of the season, kick off 12pm.

Saints welcomed Aberdeen to McDiarmid Park this evening for their final home league game of the season. A last minute goal from Jack Fitzwater saw Saints held to a 1-1 draw at Livingston on Saturday and Callum Davidson made three changes to his starting eleven this evening. Callum Booth, Cammy MacPherson and Stevie May all dropped out and they were replaced by James Brown, Jacob Butterfield and Glenn Middleton. A late second half goal from Paul McGinn meant that Aberdeen were also held to a 1-1 draw at the weekend and they made three changes as well to their starting eleven this evening. Adam Montgomery, Funso-King Ojo and Michael Ruth all came in to replace Ross McCrorie, Jonny Hayes and Marley Watkins.

Vicente Besuijen got the match underway for the visitors and The Dons created the first chance of the match on 7 minutes as Funso-King Ojo cross from the right was headed behind for corner by Dan Cleary. Connor Barron took the corner from the left and his deep ball into the box was met by Lewis Ferguson but he put his effort wide.

Aberdeen were enjoying large spells of possession early on however, on 14 minutes Glenn Middleton let fly from 25 yards but his effort went narrowly wide. That proved to be a warning for The Dons as 3 minutes later Saints took the lead. Good play down the right saw Melker Hallberg play the ball into Middleton who cut the ball back from the by-line and it was met by Callum Hendry who swept the ball beyond the reach of Joe Lewis. 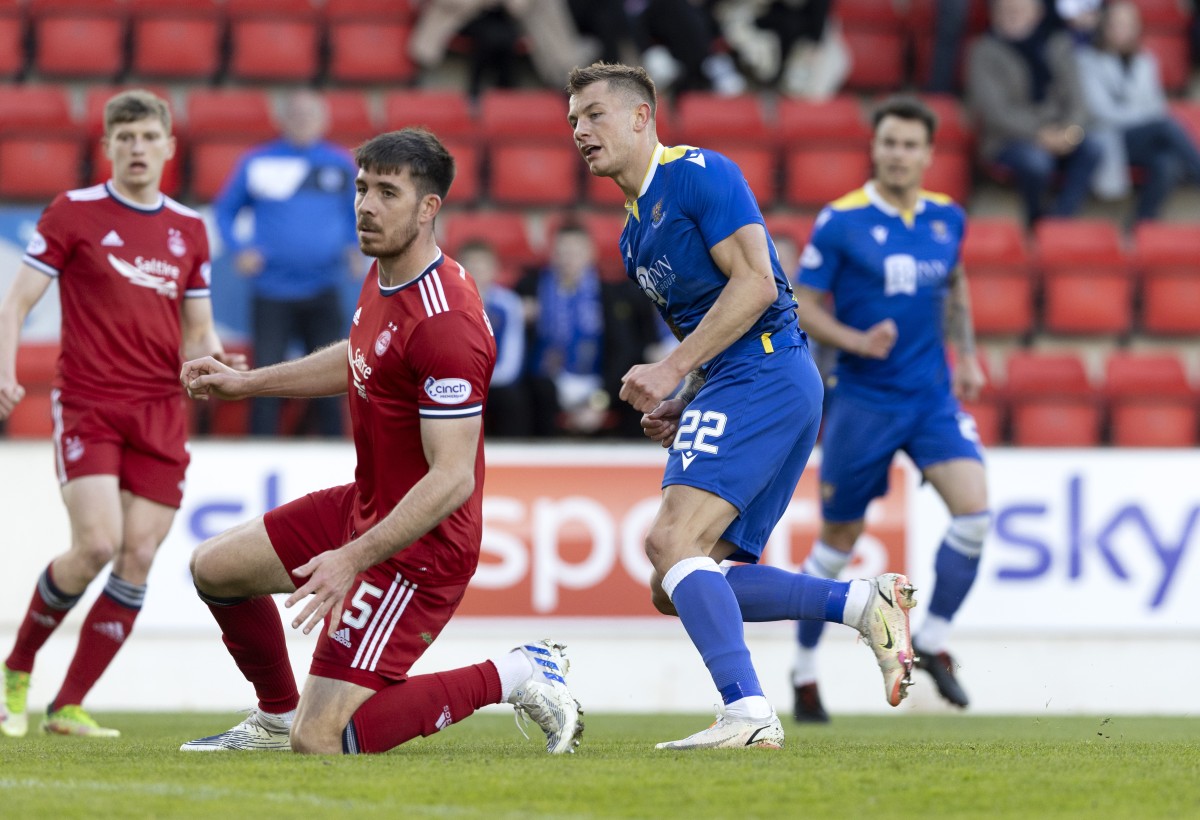 Middleton was in fine form and on 19 minutes his driving run through the middle drew a free kick from David Bates. Middleton took the free kick himself as he had a go from distance which forced a good save from Lewis as he tipped the ball over for a corner. Jacob Butterfield took the corner from the right but his delivery was cleared by The Dons rearguard.

The first booking of the game came on 24 minutes as Hendry was shown a yellow card for a high foot challenge on Connor Barron.

Just after the half an hour mark a low ball into the Saints box by Dante Polvara was cut out for a corner by Shaun Rooney. Barron took the corner from the right as it again picked out Ferguson at the back post but the header from the midfielder was straight at Clark who comfortably gathered the ball.

The Saints goal had Aberdeen rattled but they slowly started to come back into the game as the first half wore on and on 38 minutes Vincente Besuijen broke into the Saints box however, his effort lacked power as Clark comfortably gathered. 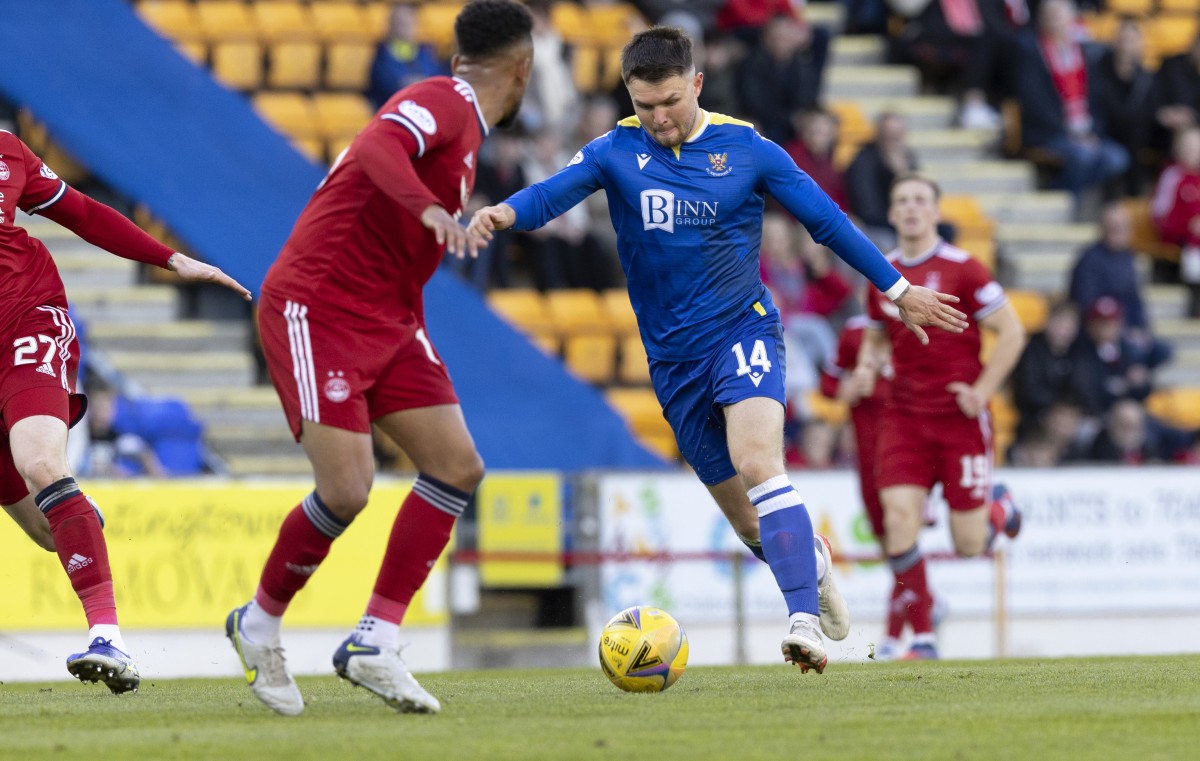 Then just before half time there were further bookings for Jamie McCart for a foul on Ferguson and for David Bates after The Dons defender stopped Hallberg in his tracks as he broke forward.

The first change of the game came on 56 minutes as Jonny Hayes came on to replace Polvara for the visitors.

Then a minute later a Melker Hallberg corner from the left broke to Rooney at the back post but his downward header went inches over. Good play by Saints on 61 minutes saw Middleton feed the ball into the path of Hendry who took a touch to create space for himself before seeing his curling 20 yard effort go narrowly over the bar. 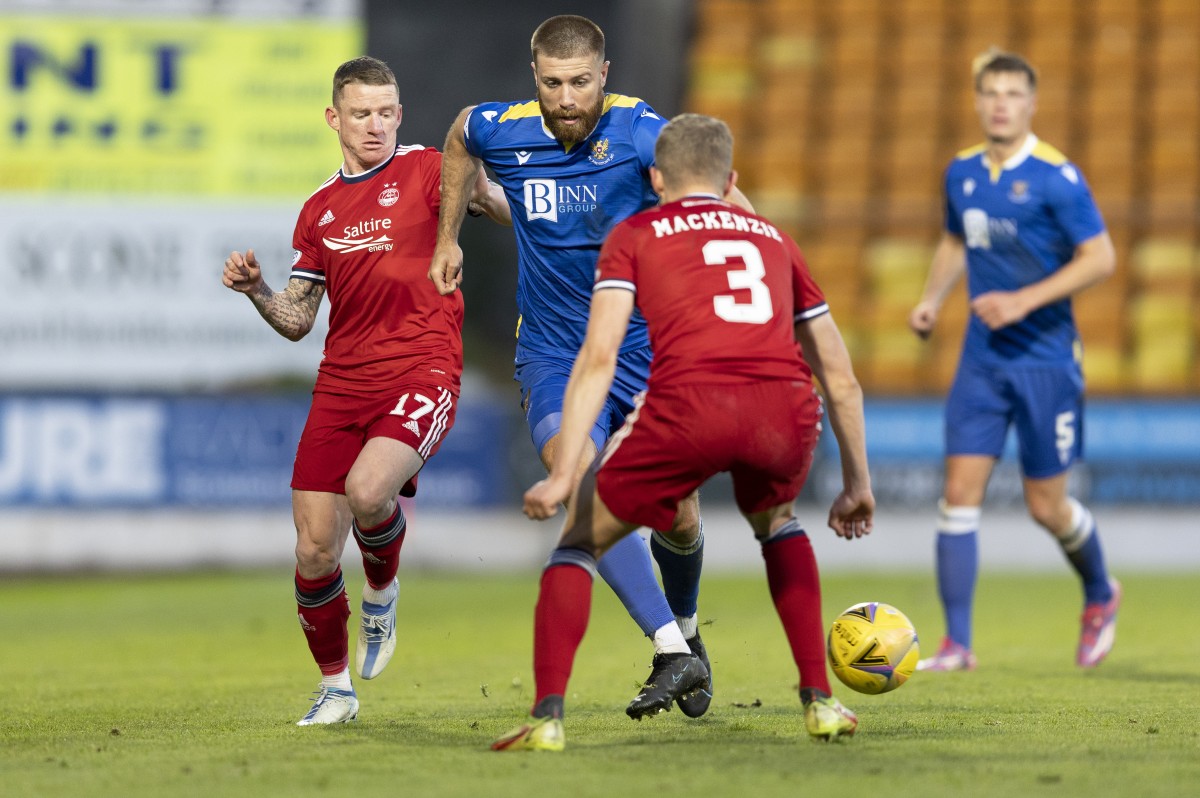 PHOTO: Shaun Rooney gets between Jonny Hayes and Jack MacKenzie

Further changes for Aberdeen followed as Matty Kennedy and Connor McLennan were introduced into the action on 66 minutes, replacing Michael Ruth and Adam Montgomery respectively.

Liam Gordon was the next player in David Munro’s book as he was penalised for a bringing down McLennan. The resultant free kick was taken by Barron but the effort from the midfielder was comfortably saved by Clark.

The Dons were then forced into a change as substitute Jonny Hayes had to go off injured with 16 minutes remaining and he was replaced by Liam Harvey.

The bookings continued to flow as Rooney was shown a yellow card for dissent on 77 minutes and then on 83 minutes McCart made a great tackle as he got back to cut out McLennan to turn the ball behind for a corner.

With 5 minutes of the match remaining Saints made a double change as Cammy MacPherson and Theo Bair came on to replace Melker Hallberg and Callum Hendry. Then deep into the 4 minutes of additional time Liam Craig was introduced into the action, replacing Jacob Butterfield as Saints comfortably saw the game out to secure the 3 points which sees them finish eleventh in the league and consign Dundee to relegation to the Championship.

Picture: Callum Hendry celebrates scoring the only goal of the game