The only goal of the game came on 16 minutes as Callum Booth’s cross into the box wasn’t dealt with by the Hibs defence and the ball broke to Liam Craig on the edge of the box. The experienced midfielder brought the ball down before curling a fine effort beyond Ofir Marciano to give Saints the lead.

Hibs were much improved in the second half but the Saints defence put in a solid performance to ensure that the 3 points remained in Perth.

Today’s win moves Saints up to seventh in the league with 37 points, 2 points off sixth placed St Mirren with one game remaining before the split.

Next up for Saints is a home game against Ross County in a fortnight, kick off 3pm.

Saints welcomed Hibs to McDiarmid Park this afternoon as they looked to continue their push for a top six finish. Saints drew 1-1 with Hamilton Accies on Wednesday evening and Callum Davidson made four changes to the team for today’s game. Michael O’Halloran, Callum Booth, Ali McCann and Chris Kane came in to replace Shaun Rooney, Scott Tanser, Craig Bryson and Stevie May. Hibs lost 2-0 at home to Motherwell last weekend and Head Coach Jack Ross also made four changes to his team. Darren McGregor, Lewis Stevenson, Jamie Murphy and Christian Doidge all dropped to the bench and were replaced by Ryan Porteous, Alex Gogić, Josh Doig and Kevin Nisbet.

David Wotherspoon got the match underway for Saints and it was a positive start by the Perth side. After having the better of the opening exchanges, Saints took the lead on 16 minutes. A good move down the left saw Callum Booth deliver a fine ball into the box which wasn’t dealt with by the visitors. The ball was then played back to Liam Craig on the edge of the box and the Saints midfielder brought the ball down before looking up and curled a delightful curling effort into the bottom corner. It was a fine finish by the midfielder which was his 60th goal for Saints. 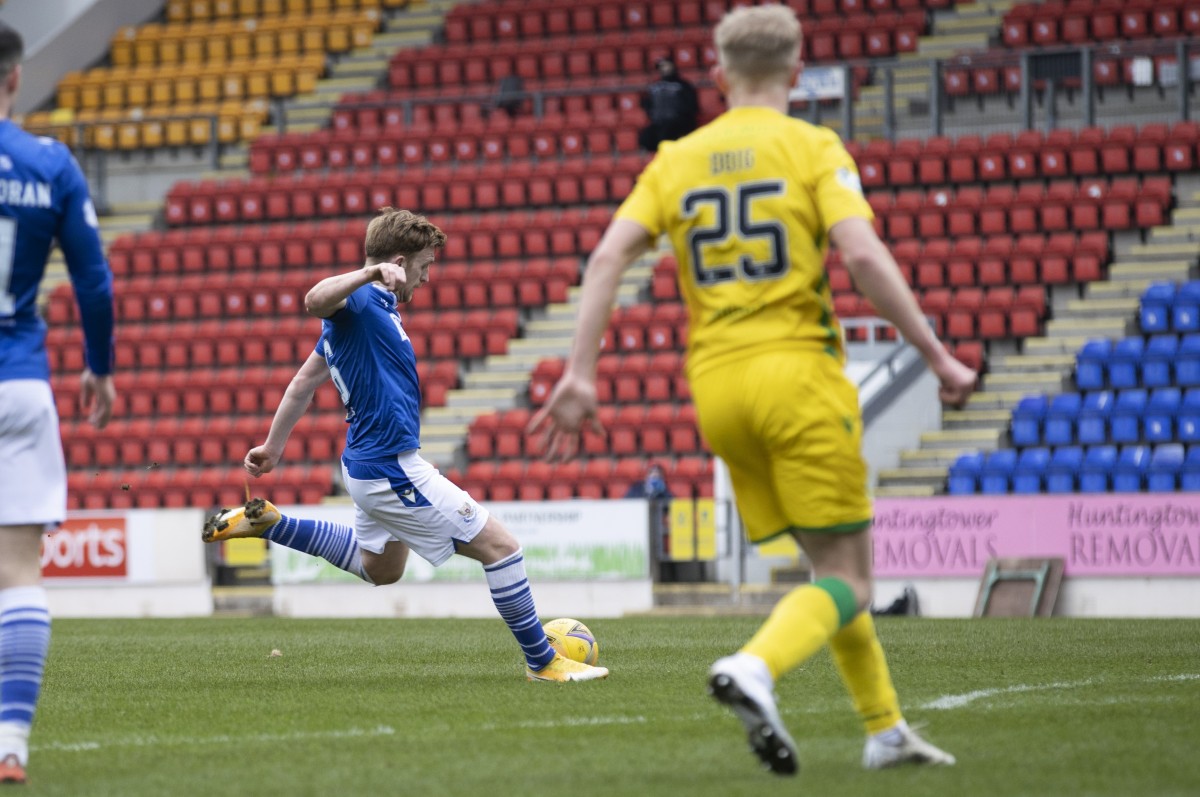 PHOTO: Liam Craig scores the only goal of the game, his 60th career goal for Saints

On 25 minutes the visitors were awarded a free kick after a foul on Martin Boyle by Liam Gordon however, Hibs couldn’t take advantage of it as Saints cleared this lines.

Just after the half an hour mark Saints were awarded a free kick after a foul on Wotherspoon by Alex Gogić. Craig took the free kick and his delivery into the Hibs box was met by Jamie McCart but the defender’s header was straight at Ofir Marciano.

A good move by Hibs on 39 minutes saw Jackson Irvine play a fine ball into Joe Newell who was on the edge of the Saints box and the English midfielder took a touch before sending his shot wide of the mark.

Just before half time Saints were awarded a free kick in a promising position after Guy Melamed was fouled by Ryan Porteous and the Hibs defender was subsequently booked for the challenge. Wotherspoon took the free kick but his effort rebounded off the wall and from the follow-up Craig’s ball into the box was gathered by Marciano.

Into the second half and on 47 minutes Hibs won a corner which was taken by Boyle and his delivery from the left was met by Irvine but the header from the Australian went wide of Zander Clark’s right-hand post.

The visitors were applying a lot of pressure in the early stages of the second half and they made an attacking change on 54 minutes as Christian Doidge came on to replace Chris Cadden. Then a minute later Paul Hanlon headed over after a good ball into the Saints box by Boyle.

Saints then made a change of their own on 57 minutes as Melamed made way for Craig Conway.

Then a minute later Kevin Nisbet broke in on goal after a rare Liam Gordon error but Craig got back and made a brilliantly timed tackle on the former Dunfermline Athletic man.

Hibs continued to search for the equaliser and on 66 minutes Clark made a great save to deny Doidge from 18 yards as he palmed the Welshman’s shot behind for a corner.

Both sides then made more changes as Stevie May came on for Saints, replacing Chris Kane, whilst Hibs brought on Jamie Murphy for Jackson Irvine.

On 76 minutes Saints were awarded a free kick after Ali McCann was fouled by Newell, who was booked for the foul. Craig took the free kick and he played a short ball to May but Porteous was able to clear the danger. However, the clearance from the Hibs defender only went as far as Wotherspoon who did a lovely step over before crossing the ball into the box. The ball ricocheted around the visitor’s box before the Hibs rearguard eventually cleared the danger.

Play then quickly switched to the other end as Boyle played a good cross over to Josh Doig who gathered the ball before firing an effort over. Hibs then made another change as Melker Hallberg came on for Newell.

Doig got another chance to level the match for the Easter Road side on 81 minutes as he got on the end of a Jamie Murphy pass but luckily for Saints he dragged his effort wide.

In the final minute of the match May played a neat ball into substitute Scott Tanser, who had come on to replace David Wotherspoon, and the wingback broke into the Hibs box before unleashing a shot which was blocked by Gogić.

The visitors continued to press for an equaliser as the match went into 4 minutes of additional time and Head Coach Jack Ross was booked by referee David Dickinson as his frustrations boiled over on the side-lines. Saints though saw the game out to secure a vital 3 points that keeps their top six hopes alive.

Picture: Liam Craig celebrates scoring the only goal of the game