Saints secured a place in the top six this afternoon thanks to Glenn Middleton’s superb strike 4 minutes from the end. Coupled with St Mirren drawing 1-1 with Hamilton Accies at the Fountain of Youth Stadium it meant Saints leapfrogged the Paisley side into sixth place on goal difference.

The Perth side started brightly and they dominated the first half and created numerous chances. Ali McCann’s 20 yard effort was well saved by Ross Laidlaw and Guy Melamed’s fantastic ball played in Chris Kane but Laidlaw was out quick to deny the Saints striker.

Saints continued to create opportunities in the second half and they finally got the breakthrough on 86 minutes. Stevie May cut the ball back to Middleton and he turned and guided the ball home to ensure that Saints will finish in the top six for the eighth time in the last ten years.

Next up for Saints is a Scottish Cup Third Round fixture against Dundee at Dens Park in a fortnight.

Saints welcomed Ross County to McDiarmid Park this afternoon for their final Scottish Premiership fixture before the split. Saints went into today’s game knowing they had to win and hope St Mirren fail to pick up all 3 points against Hamilton Accies at The Fountain of Youth Stadium. Callum Davidson made one change to the side that defeated Hibs 1-0 a fortnight ago as Shaun Rooney recovered from the knock he had picked up at Hamilton Accies last month to replace Michael O’Halloran who dropped to the bench. Ross County lost 2-1 at home to Hibs last weekend and manager John Hughes made one change to his starting eleven as Blair Spittal dropped out to be replaced by Harry Paton.

David Wotherspoon got the match underway for Saints and it was a positive start by the home side as they showed their intent early on. On 11 minutes some good passing by Saints saw the ball played out to Wotherspoon on the left who did well to create space for himself before sending over a cross into the Staggies box which caused some problems for County keeper Ross Laidlaw before it went behind for a goal kick. Then a couple of minutes later Liam Craig played a great ball forward to Chris Kane however, the striker couldn’t get a hold of the pass as the ball went out for a goal kick.

On 19 minutes Saints were awarded a free kick in an inviting position after Kane had been fouled by former Saints player Keith Watson. Both Craig and Wotherspoon stood over the ball but it was latter who took the free kick but his curling effort didn’t trouble Laidlaw as the ball went high into the North Stand.

The Saints pressure continued and on 24 minutes Ali McCann unleashed a low driving effort from 20 yards but Laidlaw got down well to touch the ball behind for a corner. Then on 27 minutes Saints were awarded another free kick on the edge of the box after Kane was brought down Harry Paton. Wotherspoon took the free kick but his delivery into the box was headed behind for a corner by Jordan White. 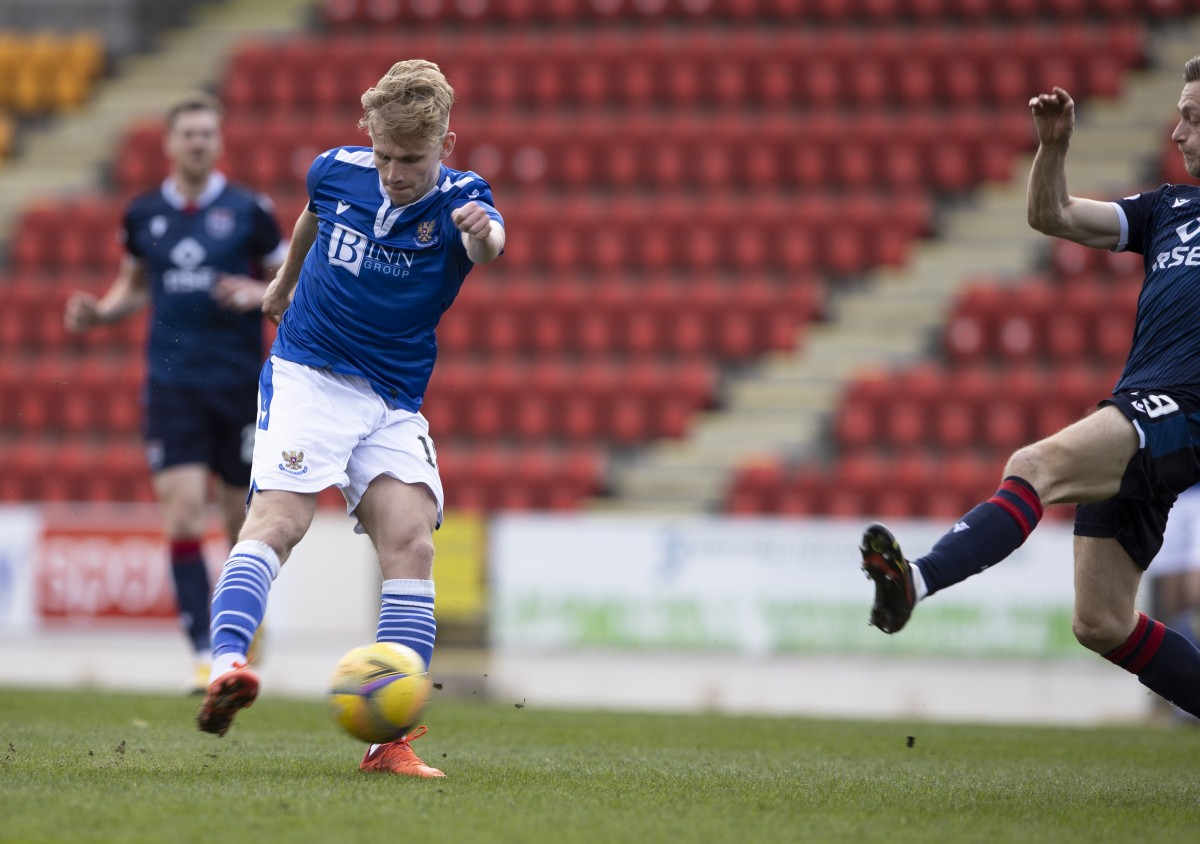 PHOTO: Ali McCann has a shot at goal which is saved by Ross Laidlaw

Saints continued to have County penned in their own half and on 29 minutes Melamed played a lovely ball to Shaun Rooney but his angled drive was deflected behind by Leo Hjelde. From the resultant corner Wotherspoon’s delivery was met by Jamie McCart but the defender couldn’t get his header on target.

Saints were dominating the game however, news had filtered through from Hamilton that St Mirren had taken the lead from the penalty spot. It was looking like top six was now going to be a big ask.

Saints though continued to plug away and with 11 minutes of the first half remaining Melamed showed great vision to play in Kane however, Laidlaw was out quick to block the strikers’ effort.

Despite Saints creating a host of chances during the first half County were still a threat and on 40 minutes they hit Saints on a quick counter-attack as the ball was played out wide to Jason Naismith but his cross into the Saints box turned behind for a corner by Callum Booth.

4 minutes later Saints were awarded another free kick as Alex Iacovitti brought down Kane out wide on the right. Wotherspoon took the free kick and Liam Gordon got up well to meet the delivery into the box but the header from the Saints defender went over. Saints still had time to create one more chance before half time as another good passing move ended with Rooney cutting the ball back to Booth in the centre of the box but his low effort was well held by Laidlaw.

Saints continued their fine play in the second half as on 51 minutes Rooney had an effort deflected for a corner. Then 5 minutes later Craig picked up the ball just outside the box but the strike from the midfielder was straight at Laidlaw who comfortably gathered.

Those changes gave the Dingwall side a brief spark and on 66 minutes Ross County create a good chance to break the deadlock as Watson headed the ball back to Coll Donaldson but the Staggies defender blasted over.

Saints then made a double change on 74 minutes as Glenn Middleton and Scott Tanser were introduced into the action, replacing Guy Melamed and Callum Booth.

Saints were claiming penalty on 77 minutes as a cross into the County box appeared to hit the arm of Alex Iacovitti but referee Craig Napier dismissed the appeals.

Then 2 minutes later Middleton got a golden chance to give Saints the lead as he was clean through on goal but Laidlaw was out quick to narrow the angle as the winger dragged his effort wide. Shortly after Wotherspoon had a strike at goal which was straight at Laidlaw.

The pressure from Callum Davidson’s eventually told as they took the lead with 4 minutes remaining. May broke into the box before cutting the ball back to Middleton who turned and despatched a low effort into the net from close range. 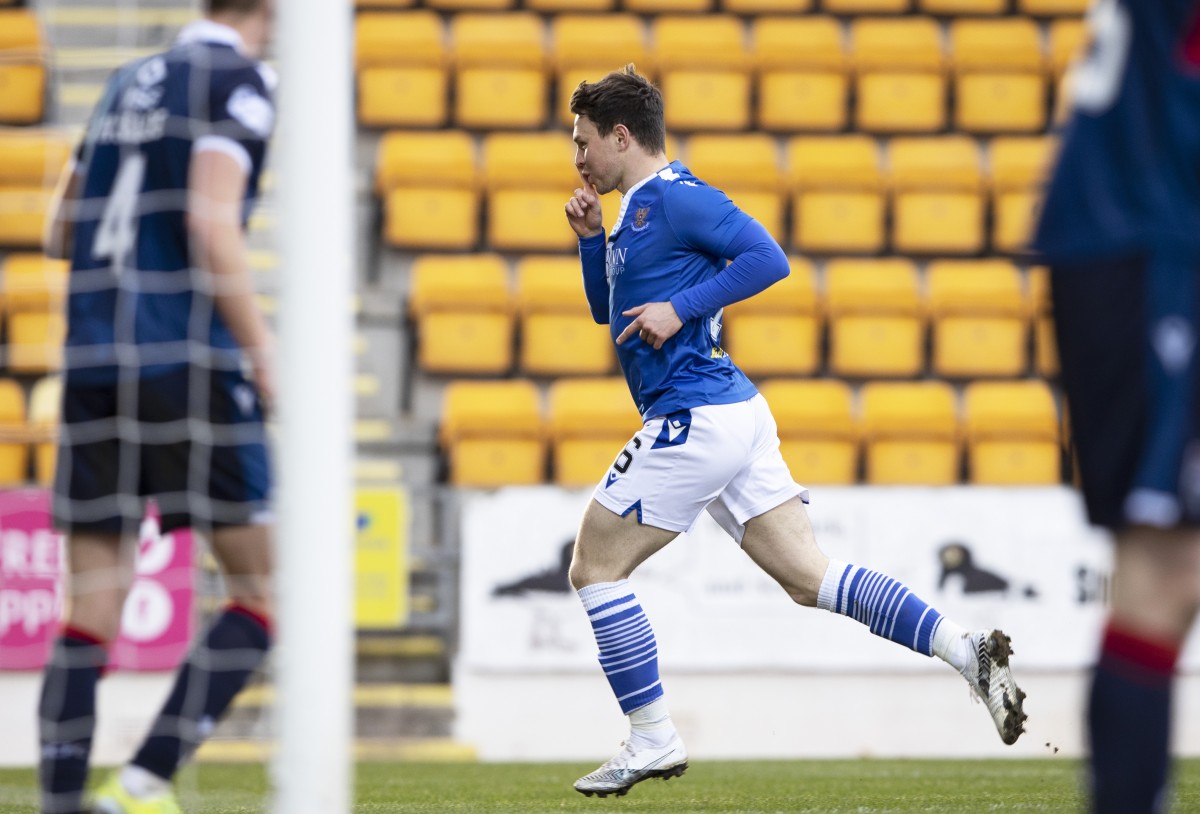 It got even better for Saints as news filtered through that Hamilton had got a late equaliser against St Mirren which meant that going into the final minutes of the match Saints were on course to secure a top six place.

It was a nervous final couple minutes of the match as a May free kick was well saved by Laidlaw. Then the visitors pushed for a late equaliser and they got a corner in the final minute of the 4 minutes of additional time. Despite County keeper Laidlaw coming up for the corner Saints were able to deal with the danger and with that secure a top six place by the tightest of margins.

Picture: Glenn Middleton scores the only goal of the game