Saints and Hearts couldn’t be separated this evening as both sides had to settle for a point in an entertaining game at McDiarmid Park.

Saints took the lead on 11 minutes when Liam Gordon tapped home a Cammy MacPherson corner at the back post. However, Josh Ginnelly levelled the match for the visitors on 40 minutes.

Hearts pressed in the second half for a winner but Saints ground out the result to secure a valuable point.

Next up for Saints is a short trip along the A90 to Dundee on Saturday as they take on Dundee United at Tannadice, kick off 3pm.

Saints welcomed Hearts to Perth this evening for the final match in the first round of fixtures for the cinch Premiership. Saints went down 2-0 at Celtic on Saturday afternoon and manager Callum Davidson made four changes to his team this evening as Lars Dendoncker, Murray Davidson, Ali Crawford and Stevie May came into the team to replace Efe Ambrose, Craig Bryson, David Wotherspoon and Glenn Middleton. Hearts were held to a 1-1 draw at home to Dundee at the weekend and manager Robbie Neilson made three changes to his starting for tonight’s game. Andy Halliday, Josh Ginnelly and Armand Gnanduillet came in to replace Alex Cochrane, Ben Woodman and Liam Boyce.

There was a late pitch inspection as the rain had got much heavier in Perth prior to kick off but after carrying out the inspection referee Steven McLean gave the thumbs up for the match to go ahead.

Before the match got underway there was a minute's silence in memory of former Rangers, Everton and Scotland Manager Walter Smith who sadly passed away yesterday at the age of 73. 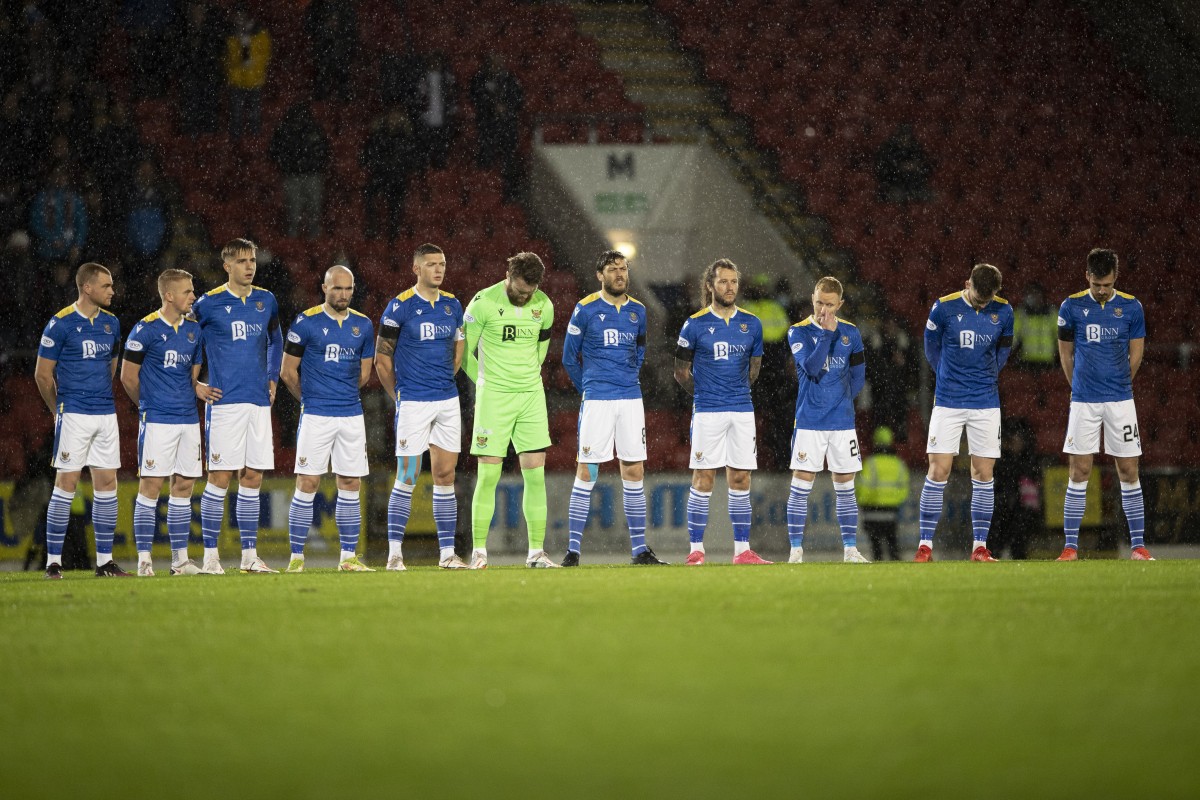 PHOTO: The Saints players observe a minute’s silence in memory of Walter Smith

Cammy Devlin got the match underway for the visitors and it was the Jambos who created the first chance of the match after 6 minutes. Michael Smith sent a good cross in from the right which Armand Gnanduillet got on the end of but the striker put his header wide.

3 minutes later Saints created a good chance as Jamie McCart and Stevie May linked up down the left as McCart’s great through ball played in May who broke into the box before seeing his strike deflected behind for a corner by Smith. Cammy MacPherson took the corner from the left and he whipped in a dangerous delivery which John Souttar turned behind for another corner.

Saints were adapting better to the wet conditions and on 11 minutes Callum Booth was next to have a strike at goal which was turned behind for another corner. It was taken by MacPherson and the midfielder delivered another lovely ball into the box which was flicked on by May and the ball broke to Liam Gordon at the back post who tapped it home from close range. 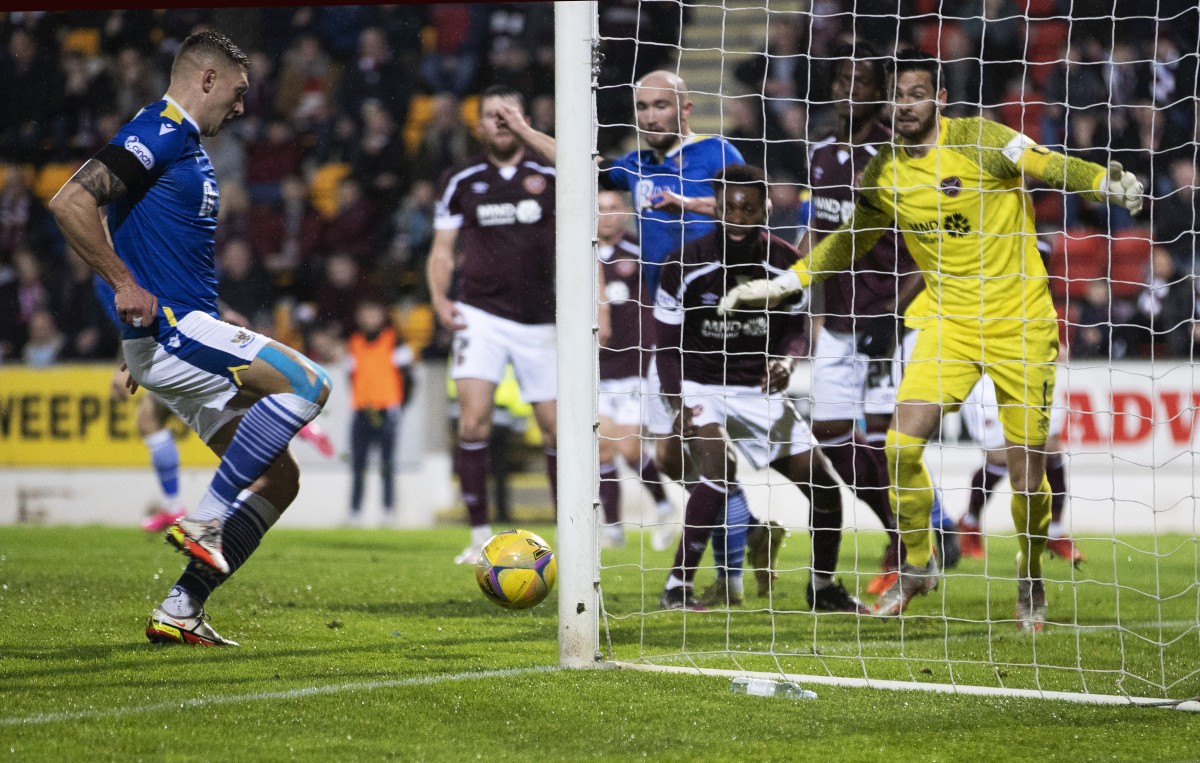 On 23 minutes the Georgie side got a sight of goal as Josh Ginnelly cut inside from the right before unleashing a strike that didn’t trouble Zander Clark in the home goal.  Then just before the half an hour mark Hearts went close from an Andy Halliday corner as Craig Halkett got on the end of it however, the former Livingston defender could direct his header on target.

It was an entertaining match and on 31 minutes McCart rose to make a connection with a MacPherson corner which went inches wide of Craig Gordon’s left-hand post. From the goal kick Saints won possession following good pressure by Stevie May on Gordon and the ball broke to Chris Kane but the Hearts number one made a fine recovery save.

With 10 minutes of the first half remaining Saints were awarded a free kick in a promising position as Booth was fouled by Souttar, who was booked for the challenge. Both Booth and MacPherson stood over the free kick and it was taken by the latter however, MacPherson was unable to direct his effort on target.

However, Saints would suffer a setback with 5 minutes of the first half remaining as the visitors equalised. Beni Baningime played in Ginnelly who produced a fine finish to level the match. Saints were claiming that there had been a foul in the build-up but the appeals were dismissed by referee Steven McLean.

Hearts then almost went in with the lead at half time as deep into the 2 minutes of stoppage time Halliday’s corner was met by Gnanduillet but Clark got down low to his right to make a fine save. Gnanduillet reacted quickest to the loose ball but he could only find the side netting with his follow-up effort. 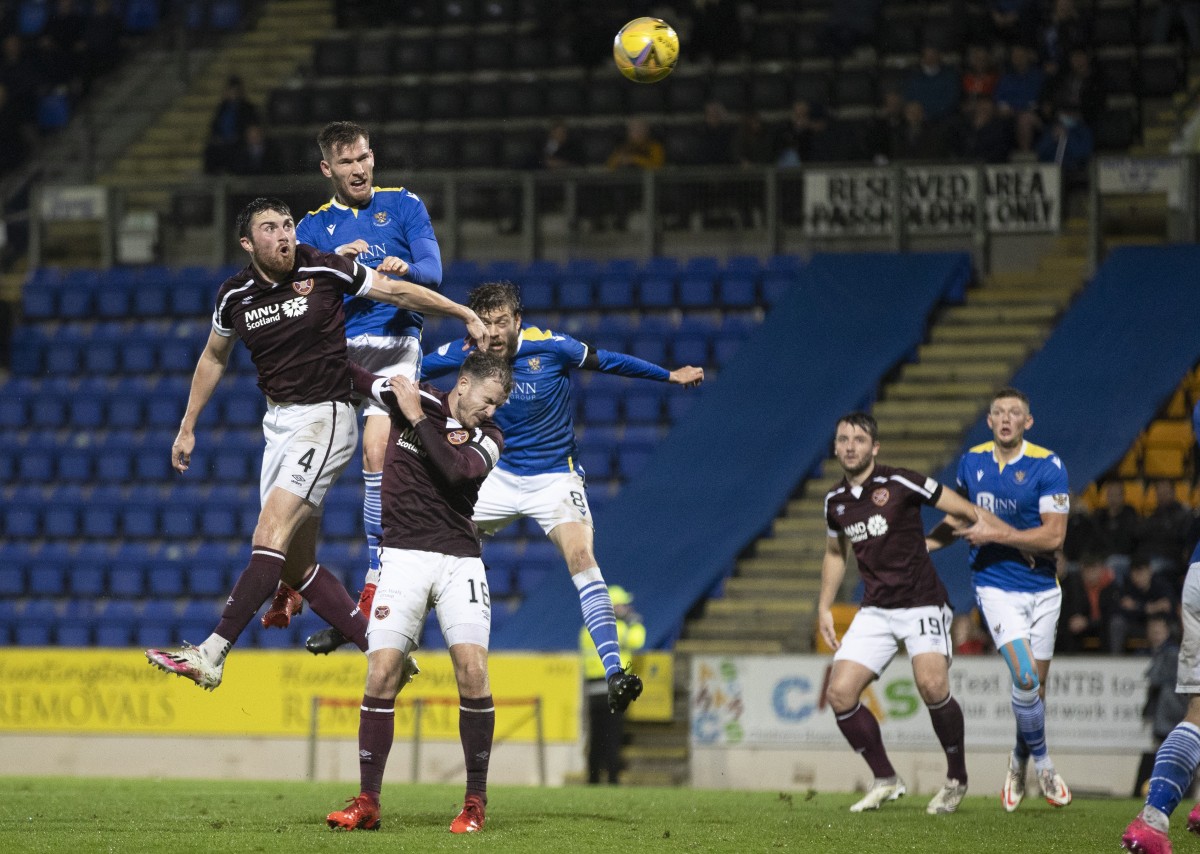 PHOTO: Jamie McCart gets above John Souttar only to see the ball go wide

Saints were forced to make a double change before the second half could get underway as Reece Devine and Efe Ambrose came on to replace James Brown and Lars Dendoncker.

4 minutes into the second half Hearts created a good opportunity to take the lead as Devlin played in Gnanduillet who was one-on-one with Clark but the Saints number one made a fine save as he turned the ball behind for a corner.

On the hour mark Hearts created another opening as Souttar carried the ball forward into space before unleashing a long-range effort that went just wide of the target.

A quick counter attack by Saints on 71 minutes saw the ball played out to May and the Saints number seven carried the ball forward before cutting inside and playing in Devine but the strike from the on-loan Manchester United man was saved by Gordon. 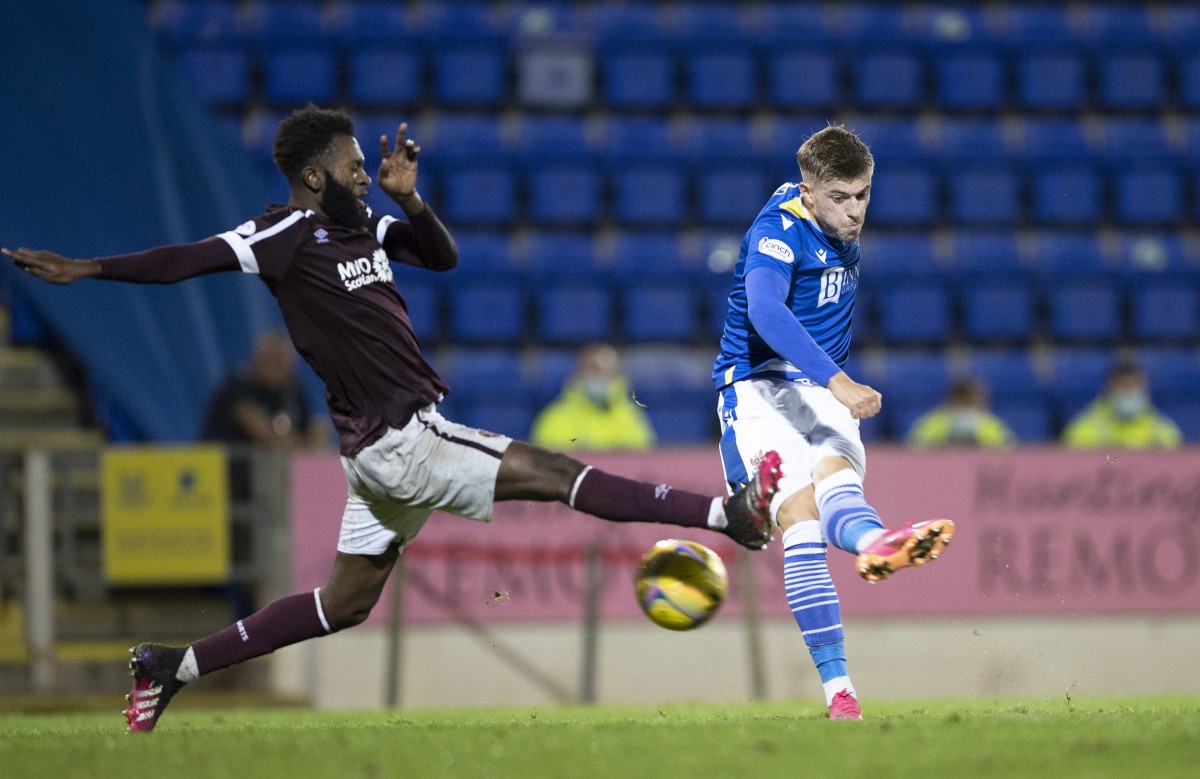 PHOTO: Reece Devine is closed down by Beni Baningime

Play very quickly switched to the other end as after some pressure in the Saints box the ball broke to Souttar but he curled his strike inches wide.

Hearts were dominating the chances and with 14 minutes remaining substitute Ben Woodburn broke forward before playing in Gnanduillet but the Ivorian forward dragged his effort wide.

Both sides pressed in the closing stages as they looked for a winner but neither side could find the breakthrough as they had to settle for a share of the spoils.

Picture: Chris Kane is closed down by Andy Halliday and Barrie McKay