A Tony Watt volley with 10 minutes remaining meant Saints had to settle for a point against Motherwell at McDiarmid Park this afternoon.

Saints took the lead on 34 minutes as David Wotherspoon’s curling cross took a nick of Motherwell captain Stephen O’Donnell to divert the ball past Liam Kelly.

Saints created chances to win the match however, Tony Watt levelled for the visitors late on as he volleyed the ball past Zander Clark.

Next up for Saints is the second leg of their UEFA Europa League Third Qualifying Round match against Galatasaray at McDiarmid Park on Thursday evening, kick off 7pm.

After securing a 1-1 draw against Galatasaray in Istanbul on Thursday evening, Saints were in league action this afternoon as they welcomed Motherwell to McDiarmid Park for their first home league game of the season. There were five changes to the Saints team this afternoon as Callum Davidson brought in Hayden Muller, Callum Booth, Liam Craig, Stevie May and Glenn Middleton, who re-joined the club on Friday on a season long loan deal from Rangers. They replaced Jason Kerr, Reece Devine, Murray Davidson, Chris Kane and Michael O’Halloran. Motherwell got their league campaign underway last Sunday as they lost 3-2 at home to Hibs and manager Graham Alexander made one change to his team as Tony Watt dropped to the bench and he was replaced by Connor Shields.

Kevin van Veen got the match underway for the visitors but it was Saints who would create the first chance of the match after 41 seconds. Shaun Rooney played in Glenn Middleton with a neat pass. Middleton then tried to pick out May with a pass into the centre of the box but his cross was cut out for a corner by Callum Slattery. Liam Craig took the corner from the right however, his delivery was headed clear by Kaiyne Woolery.

The Steelmen created their first opportunity of the match on 4 minutes as a through ball from Woolery played in Kevin van Veen but Zander Clark made a good save to deny the Dutch striker as he pushed the ball behind for a corner.

It was a lively start to the match and on 8 minutes good pressing by Saints saw Ali McCann win possession from Liam Donnelly on the edge of the Motherwell box. The midfielder then passed the ball to Stevie May however, the Saints number 7 hesitated as he tried to get his shot away. May then returned the ball to McCann but his effort was blocked by Ricki Lamie as it went behind for a corner.

Saints were looking a threat going forward but it was the visitors who almost took the lead on 18 minutes as Slattery’s cross from a short corner was met by Woolery but Clark made an excellent save as he got down low to his right to save the forward’s close-range header.

Then a couple of minutes later a good move by Saints saw Rooney play in Hayden Muller and the on-loan Millwall defender had a shot at goal which was saved by Liam Kelly. 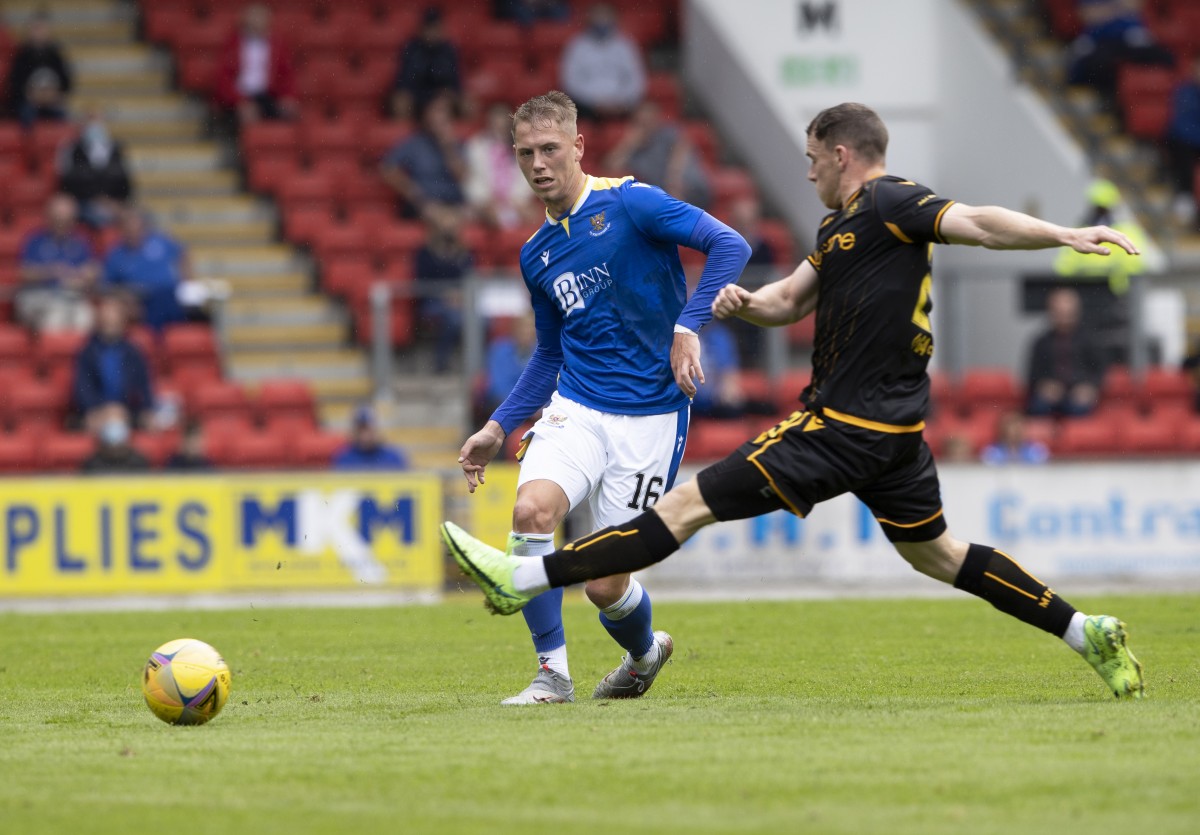 PHOTO: Hayden Muller is closed down by Connor Shields

Saints were causing the visitors lots of problem going forward and Callum Davidson’s side got the breakthrough on 34 minutes. Wotherspoon played a short corner on the left to Middleton and he then passed the ball back to the Canadian internationalist who cut inside before whipping a curling cross into the box, which hit off Motherwell captain Stephen O’Donnell and went into the net at the back post to put Saints a goal up.

Into the second half and on 53 minutes a long-throw from O’Donnell into the Saints box was met by Bevis Mugabi however, his flicked header hit the post. The loose ball then broke to van Veen but Clark reacted quickly as he smothered the ball.

Then a minute later another good Saints move saw Middleton cut in from the right and he picked out May in the centre of the box but he was unable to direct his effort on target as it went high into the Ormond Stand.

On 66 minutes Wotherspoon played a tidy pass to Middleton, who was having a great game, and he advanced with the ball before cutting in to have a shot which was well saved by Kelly. Saints continued to create chances and Craig got the next opportunity but the stand-in captain dragged his effort wide. 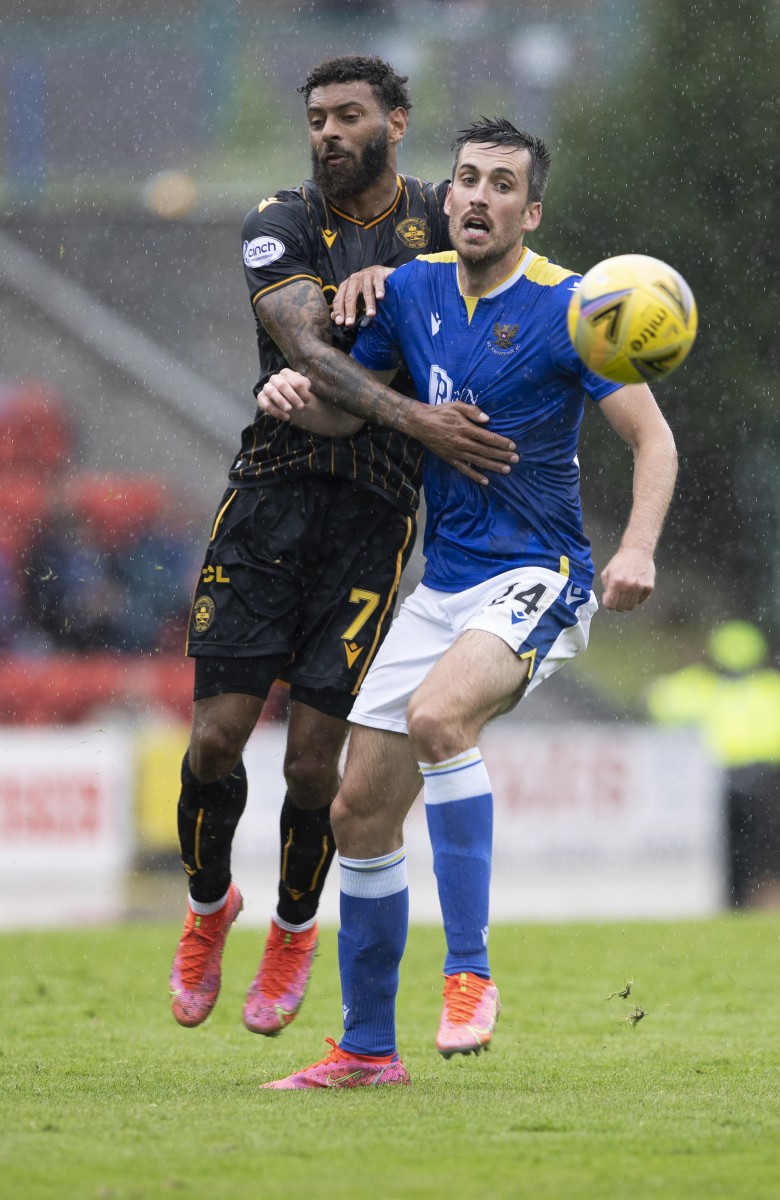 PHOTO: Callum Booth and Kaiyne Woolery challenge for the ball

Saints then made a couple of changes as Chris Kane and Michael O’Halloran came on to replace Stevie May and Glenn Middleton.

The chances continued to come for Saints and on 73 minutes O’Halloran was setup by Rooney but again Kelly made another fine save.

Despite the domination by Saints Motherwell were back on level terms with 10 minutes remaining. A long ball forward was gathered by Steven Lawless and the substitute then played in Tony Watt who volleyed the ball into the net from 12 yards.

Before the game could restart Saints made a change as Liam Craig made way for Murray Davidson.

Slattery then tried to put the visitors ahead but he dragged his strike wide from 30 yards on 83 minutes. Then shortly after O’Donnell sent over an inviting cross from the right but luckily for Saints Watt couldn’t make a proper connection with the ball as it went wide.

Saints pushed late for a winner and with 2 minutes remaining O’Halloran got a sight of goal however, he fired wide as Saints had to settle for a point.

Picture: Stevie May is tackled by Bevis Mugabi