After a goalless first half in which Saints had created several clear-cut chances to take the lead, Scott Wright put the visitors ahead 10 minutes into the second half with a fine curling effort.

Saints continued to battle and got their deserved equaliser in stoppage time. Chris Kane was caught in the box by Jack Simpson and referee Euan Anderson pointed to the spot. Liam Craig stepped up to take the penalty and he sent a powerful effort into the top right-hand corner with virtually the last kick of the game.

Tonight’s result sees Saints remain in sixth place in the Scottish Premiership on 41 points, and they are now only 3 points behind fifth placed Livingston with 3 games remaining.

Next up for Saints is a trip to Ibrox on Sunday for a Scottish Cup quarter final tie against Rangers, kick off 6:30pm.

Saints were back in league action this evening as they welcomed Rangers to McDiarmid Park. Saints progressed to the last eight of the Scottish Cup on Saturday as they defeated Clyde 2-0 and Callum Davidson made four changes to his starting eleven for tonight’s game. Zander Clark, Shaun Rooney, Callum Booth and Ali McCann came in to replace Elliott Parish, James Brown, Scott Tanser and Michael O’Halloran who all dropped to the bench. Rangers defeated Celtic 2-0 at Ibrox on Sunday to setup a quarter-final tie against Saints in the Scottish Cup and manager Steven Gerrard made seven changes to his starting eleven this evening. Allan McGregor, Nathan Patterson, Filip Helander, Joe Aribo, Scott Arfield, Alfredo Morelos and Ryan Kent all dropped to the bench and they were replaced by Jon McLaughlin, James Tavernier, Jack Simpson, Ianis Hagi, Scott Wright, Kemar Roofe and Cedric Itten.

It was a lovely sunny spring evening in Perth as Kemar Roofe got the match underway for the visitors.

Saints started the match on the front foot and they got the first corner of the game on 3 minutes which was taken by David Wotherspoon who sent a low ball into the box which Stevie May flicked on to Liam Craig however, the strike from the Saints midfielder was straight at Jon McLaughlin.

Saints continued to apply the early pressure and Guy Melamed had the ball in the net a minute later after Wotherspoon had played him in with a lovely pass however play was pulled back for offside. 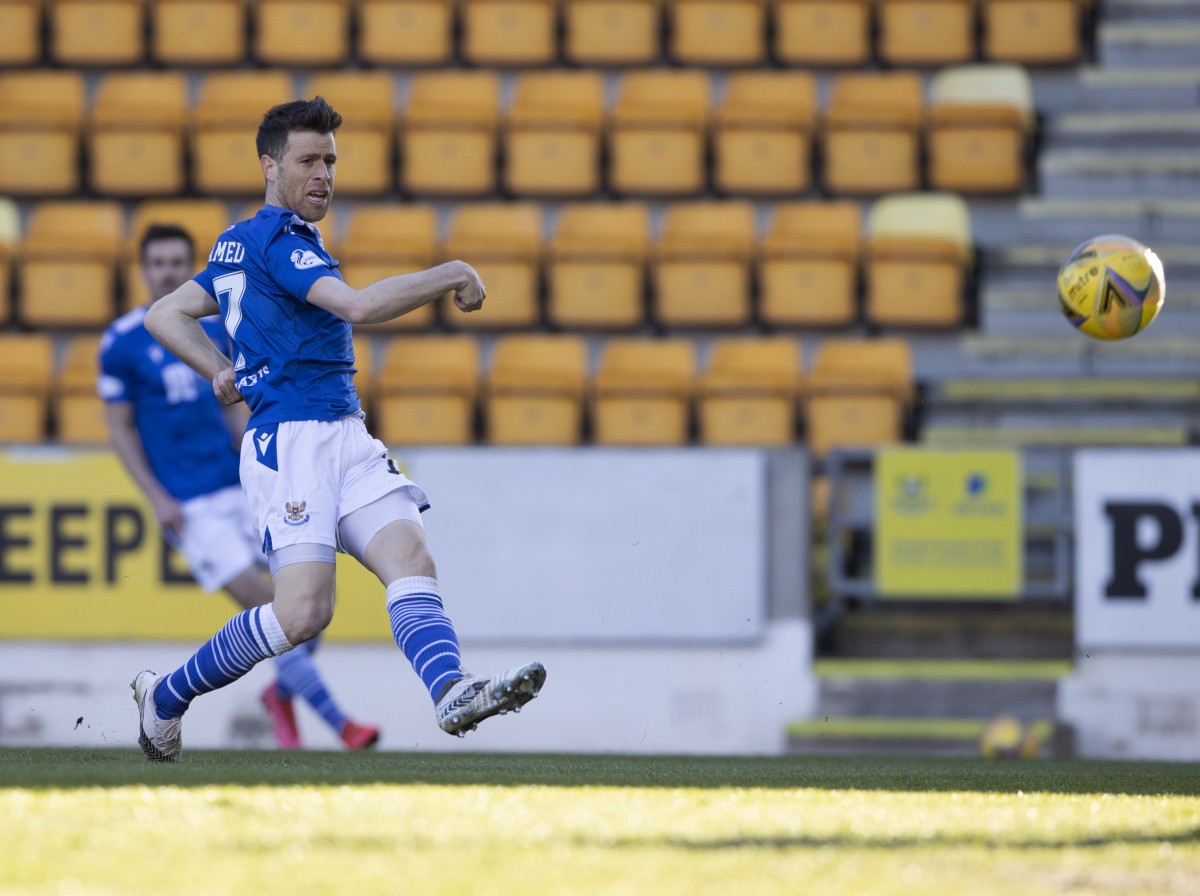 PHOTO: Guy Melamed scores only to see his goal ruled out for offside

Another Wotherspoon corner on 6 minutes picked out Melamed but the header from the Israeli forward was well held by McLaughlin. The early one-way traffic towards the Rangers goal continued a minute later as May broke down the right before trying to pick out Melamed was a cross into the box but Jack Simpson did well to get back and cut the ball out for another Saints corner.

Rangers created their first chance on 10 minutes as Ianis Hagi advanced down the right to the byline before cutting the ball back to Simpson but the header from the defender went over.

The first booking of the game came on 18 minutes as Shaun Rooney was shown a yellow card for a late challenge on Scott Wright. Then shortly after Saints were forced into a change as Guy Melamed appeared to pick up a head knock and was replaced by Chris Kane.

On 23 minutes Kemar Roofe sent a good long ball in behind the Saints defence which played in Wright however, Zander Clark was out quick to gather the ball at the feet of the former Aberdeen player.

Just before the half an hour mark Saints were awarded a free kick out wide on the right after Kane had been fouled by Simpson. From the free kick Craig crossed the ball into the box and Liam Gordon got up well to meet the cross however, his header went narrowly over.

10 minutes in the second half the visitors took the lead. Steven Davis gathered the ball in midfield before picking out Scott Wright with a good pass, who curled a right-footed effort from 18 yards past Clark.

Just before the hour mark it looked like Saints had been awarded a penalty after Rooney went down in the box after having his short pulled by Borna Barišić. However, after consulting with the Main Stand assistant, referee Euan Anderson changed his decision and award Rangers a goal kick.

On 64 minutes Kane won Saints a free kick after he was brought down by Simpson. Craig took the free kick and he floated the ball into the danger area which was met by Rooney who chested the ball down before having a strike at goal which was blocked by the Rangers defence.

Saints made a double change on 73 minutes as Michael O’Halloran and Scott Tanser came on to replace Stevie May and Callum Booth. That was followed by another change on 78 minutes as Craig Bryson replaced David Wotherspoon as Callum Davidson freshen his side up for the closing stages.

Rangers created a chance to double their lead with 6 minutes remaining but the effort from substitute Scott Arfield was straight at Clark.

Saints continued to push for the equaliser and they had another appeal for a penalty dismissed by Euan Anderson on 86 minutes after Kane’s shot hit Simpson. Saints pressure though eventually told in stoppage time as they were awarded a penalty for a Simpson foul on Kane. Liam Craig placed the ball on the stop and he slammed the ball high into the right-hand corner to secure a well-earned point for Saints. 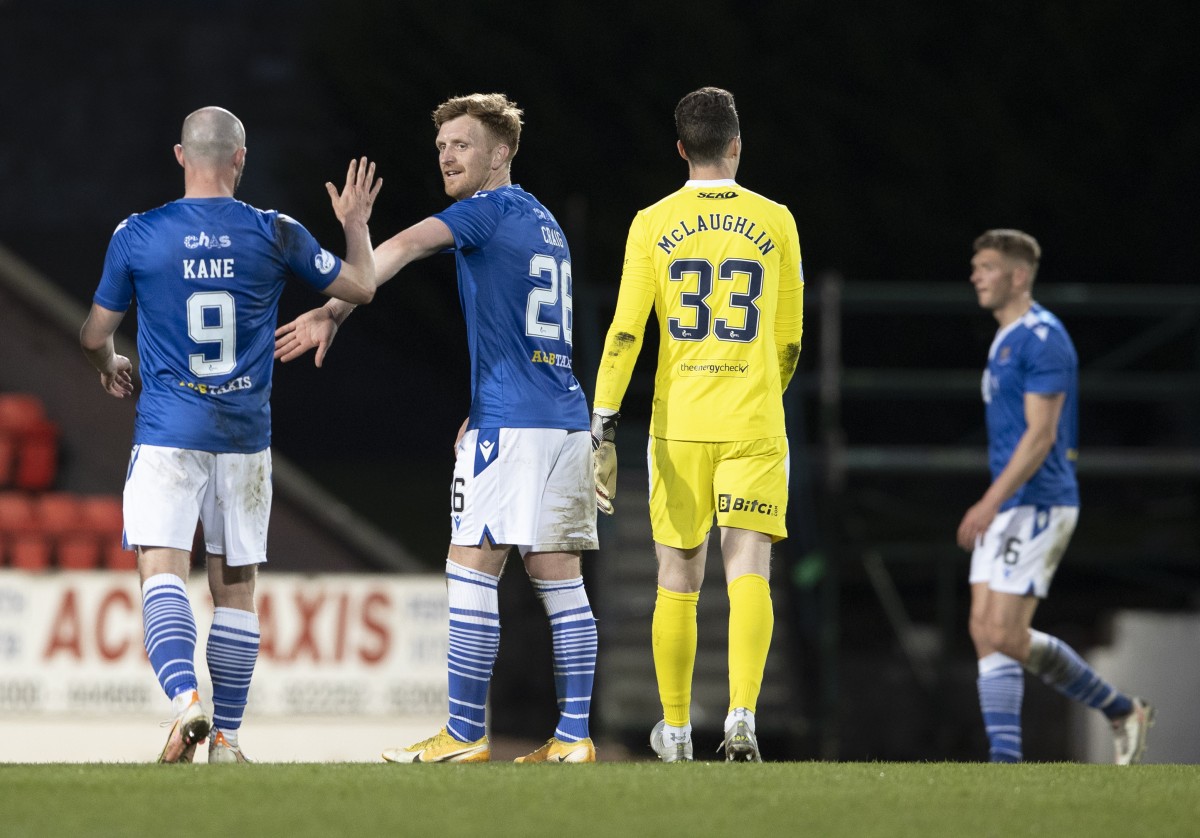 Our Scottish Cup Journey So Far...