Saints put in a strong battling performance against Rangers at McDiarmid Park this lunchtime before ultimately going down to the League Champions.

Michael O’Halloran gave Saints the lead on 51 minutes with a fine strike after Hayden Muller had played a brilliant ball over the top.

However, Rangers were soon back on level terms as Kemar Roofe levelled from the spot after Ryan Kent had been brought down in the box by Muller.

The visitors then sealed the win with 11 minutes remaining as captain James Tavernier sent a looping 25-yard effort into the far corner of the net.

Next up for Saints is a trip to Aberdeen next Saturday, kick off 3pm.

With the international break now over, Saints returned to action this lunchtime as they welcomed Rangers to McDiarmid Park. Prior to kick off it Saints were given a boost as it was announced that Callum Davidson had signed a new contract to remain in Perth until the summer of 2025. Saints last match a fortnight ago was a goalless draw at St Mirren and Callum Davidson made three changes to his starting eleven for today’s match. Both Jason Kerr and Ali McCann departed Perth on transfer deadline day as they headed south to Wigan Athletic and Preston North End respectively and they were replaced by James Brown and Ali Crawford, who joined the club on deadline day on-loan from Bolton Wanderers. The only other change to the Saints starting eleven saw Callum Hendry drop out and he was replaced by Michael O’Halloran. There was also a place on the bench for new signings Lars Dendoncker, Eetu Vertainen and Efe Ambrose. Rangers defeated Old Firm rivals Celtic 1-0 at Ibrox in their last game and manager Steven Gerrard made three changes to his team this afternoon. Robby McCrorie, Connor Goldson and Borna Barišić dropped out to be replaced by Jon McLaughlin, James Tavernier and Calvin Bassey.

Ryan Kent got the match underway for the visitors and they were awarded a free kick in a promising position on 5 minutes. Calvin Bassey had went on a strong run down the left before being fouled by Shaun Rooney however, Chris Kane comfortably headed clear James Tavernier’s delivery into the box.

The first booking of the game came on 10 minutes as Michael O’Halloran was played in by a great ball forward however, he was stopped in his tracks on the edge of the box by Gers keeper Jon McLaughlin who was booked for the foul. 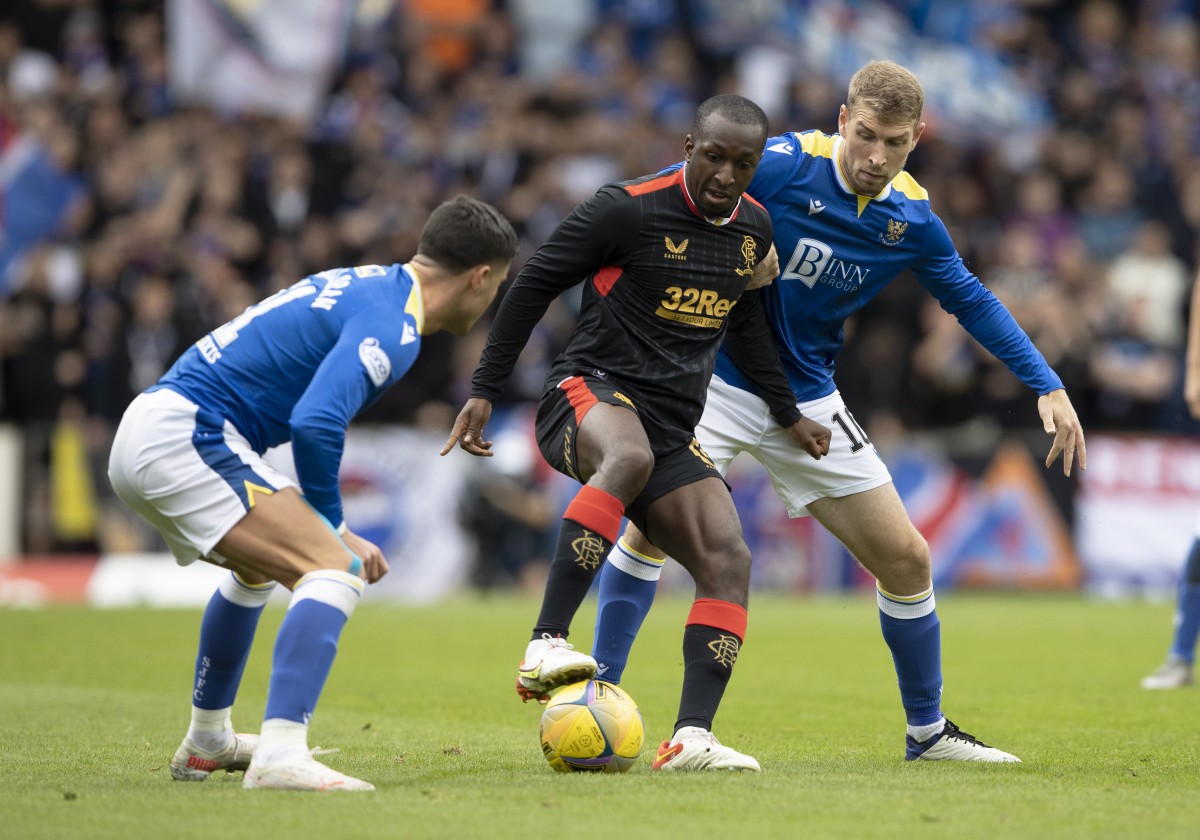 PHOTO: Glen Kamara is closed down by David Wotherspoon and Michael O'Halloran

6 minutes later a Tavernier corner from the right picked out Leon Balogun at the back post but the defender sent his looping header over. Then shortly after Kemar Roofe got a sight of goal however, Hayden Muller made a great block as Zander Clark gathered.

It was a competitive first half and with 10 minutes of the half remaining Rooney sent a dangerous ball into the box picking out Chris Kane however, the Saints forward couldn’t control the ball as Rangers cleared their lines.

Then on 37 minutes Jo Aribo won possession from Jamie McCart before playing in Roofe but Clark made a great save as he palmed the ball away. 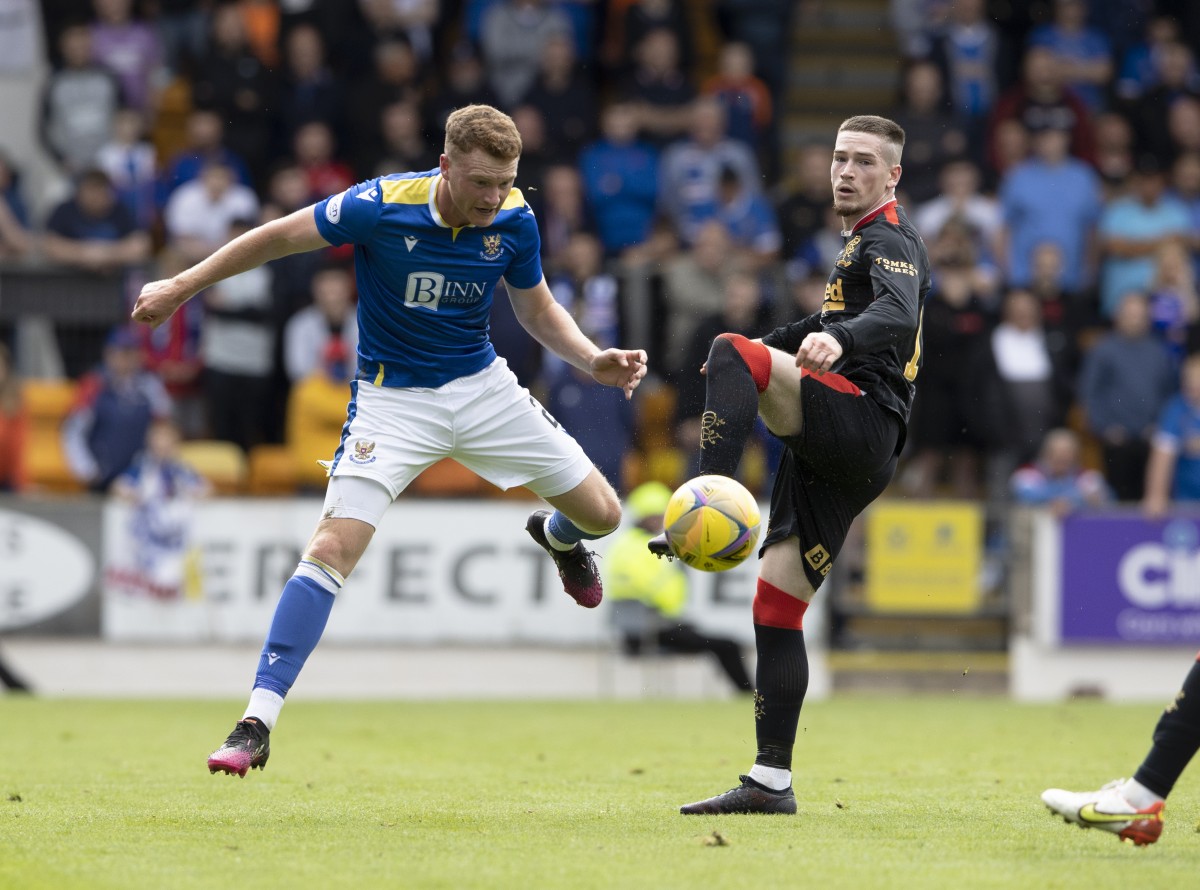 Saints took the lead 6 minutes into the second half as Muller sent a great ball over the top playing in O’Halloran and he did well to hold off the challenge from Filip Helander before cutting inside the defender and firing a great strike past McLaughlin.

Rangers almost equalised a minute later as Alfredo Morelos was inches away from connecting with Tavernier’s ball across the face of the Saints goal. The Ibrox side though were handed a route back into the match on 57 minutes as they were awarded a penalty after Kent was fouled by Muller. Roofe stepped up to take the penalty and he sent it down the middle to level the match.

Following the goal there was a melee in the Saints box involving Craig and Rooney from Saints and Roofe and Morelos from Rangers as all four players were booked by Willie Collum. 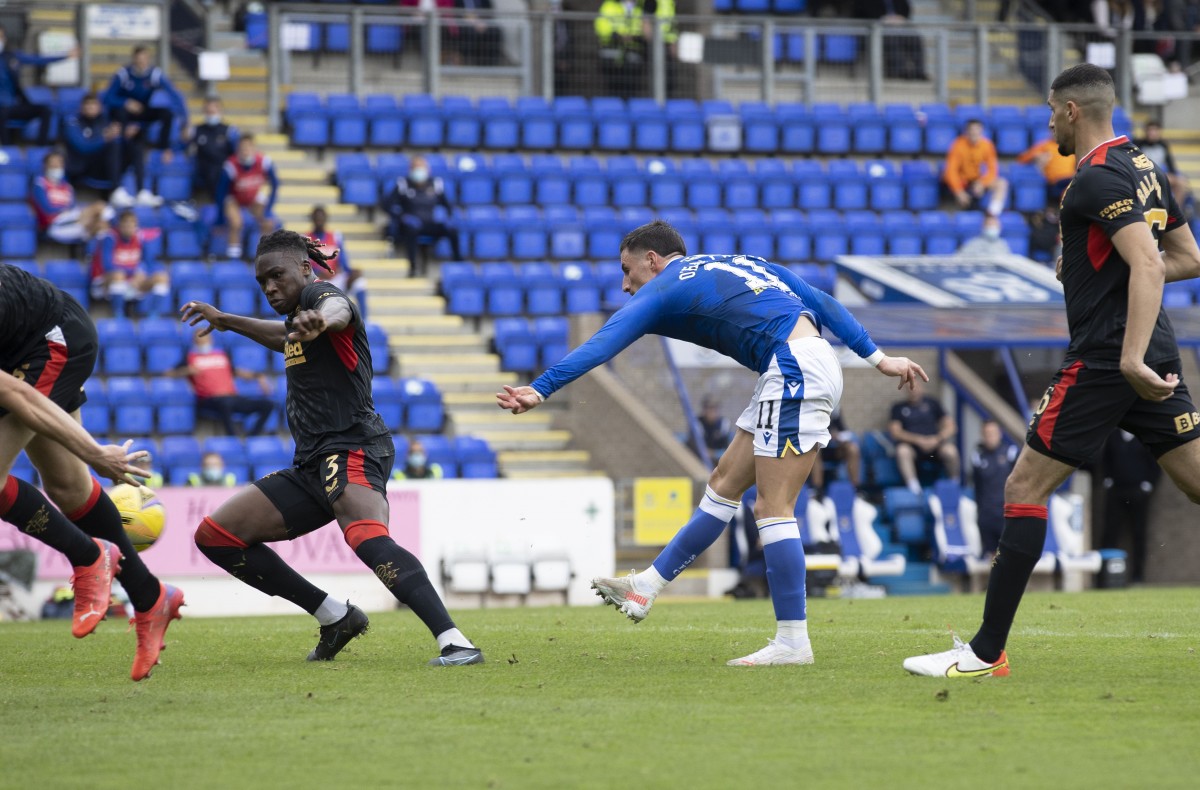 It was now game on for both sides and on 69 minutes Kent came close with a curling effort from 18 yards for the visitors.

Then 2 minutes later Rooney and Kane linked up well down the right and the latter sent over a good cross into the box which broke to Crawford but he couldn’t direct his effort on target. Saints created another chance shortly after as determined play by O’Halloran at the by-line saw him send over a cross into the box which was met by Reece Devine but his strike was deflected behind for a corner.

Rangers were forced into a change on 77 minutes as Jack Simpson came on to replace the injured Filip Helander, who had to be stretchered off.

The visitors then took the lead with 11 minutes remaining as Kent picked out Tavernier with a pass and the Light Blues captain took a touch before sending a looping strike from 25 yards into the far corner of the net.

Callum Davidson decided to make some changes as Muller and Crawford made way for Eetu Vertainen, who was making his debut for Saints, and Stevie May.

Saints pushed in the final minutes of the match as they looked to get an equaliser but they couldn’t create a final clear-cut chance as Rangers departed Perth with all 3 points.

Picture: David Wotherspoon and Joe Aribo battle for the ball