Saints will finish 2021 bottom of the cinch Premiership after Celtic ran out 3-1 winners at McDiarmid Park this lunchtime.

The Bhoys took the lead on 9 minutes when Liel Abada headed home from close range after Elliott Parish had made a good save to deny the Israeli forward. Abada then got his and Celtic’s second of the game on 22 minutes as he coolly despatched the ball beyond Parish after he had been played in by Tom Rogic.

Saints pulled a goal back with just over 20 minutes remaining as Chris Kane got on the end of a Viv Solomon-Otabor cross to glance a superb header beyond Vasilis Barkas.

However, Celtic made sure of the points on 82 minutes as Nir Bitton guided a low shot into the bottom right corner of the net.

Saints will now look to regroup over the winter break and they will return to action on Tuesday 18th January when they visit Hearts, kick off 7:45pm.

Celtic were the Boxing Day visitors to Perth this lunchtime for Saints final game of 2021 and the last one before the winter break. Callum Davidson made two changes to the team which started Wednesday’s 2-1 defeat to Ross County. Michael O’Halloran dropped to the bench and Murray Davidson missed out altogether and they were replaced by Viv Solomon-Otabor and Ali Crawford. Celtic drew 0-0 at St Mirren in midweek and Ange Postecoglou made five changes to his starting eleven this afternoon. Vasilis Barkas, Carl Starfelt, Kyogo Furuhashi, James McCarthy and Josip Juranović came in to replace Scott Bain, Anthony Ralston, Owen Moffat, Callum McGregor and Mikey Johnston.

It was a cold afternoon in Perth as Stevie May got the match underway for Saints. The first opportunity of the match fell to the visitors as Liel Abada fed the ball into the feet of Tom Rogic but the Australian midfielder dragged his effort wide.

Celtic though took the lead on 9 minutes. Josip Juranović intercepted a slack Jamie McCart pass to Callum Booth and the defender then carried the ball to the edge of the box before picking out Abada whose first time right footed effort was brilliantly saved by Elliott Parish however, the Israeli forward was the first to react to the loose ball as he got above Lars Dendoncker to head the ball into the net from close range.

Saints then looked to get a quick response and on 12 minutes Booth’s delivery in from the left was met by Stevie May but the Saints forward couldn’t direct his header on target. 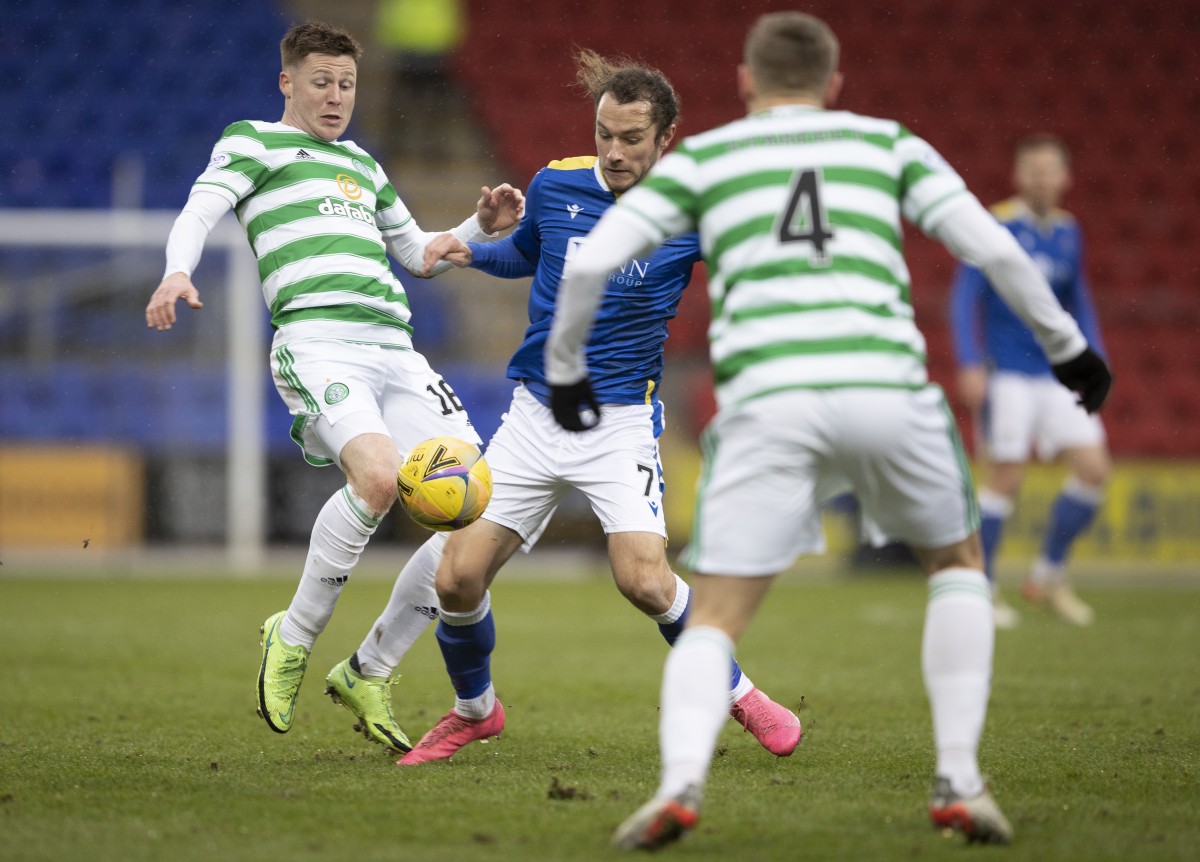 PHOTO: Stevie May is tackled by James McCarthy

The Bhoys were then forced into a change on 15 minutes as Joey Dawson came on to replace the injured Kyogo Furuhashi.

That change didn’t disrupt the visitors and on 22 minutes they doubled their lead. Nir Bitton picked out Rogic on the edge of the box and the midfielder played a good ball into the box picking out Abada who slotted the ball beyond Parish and into the far corner of the net.

2 minutes later Saints got a sight of goal as Ali Crawford picked out Jacob Butterfield just outside the box however, the strike from the midfielder went high into the North Stand.

Celtic continued to create chances and on 27 minutes Juranović unleashed a left-footed effort at goal however, his strike was straight at Parish who comfortably gathered the ball. Then just after the half an hour mark Abada almost got his hat-trick as Bitton slide in the Israeli forward but Parish made a good save as he turned the ball behind for a corner.

Celtic were dominating possession and just before half time Parish made another good save, this time to deny Liam Scales. 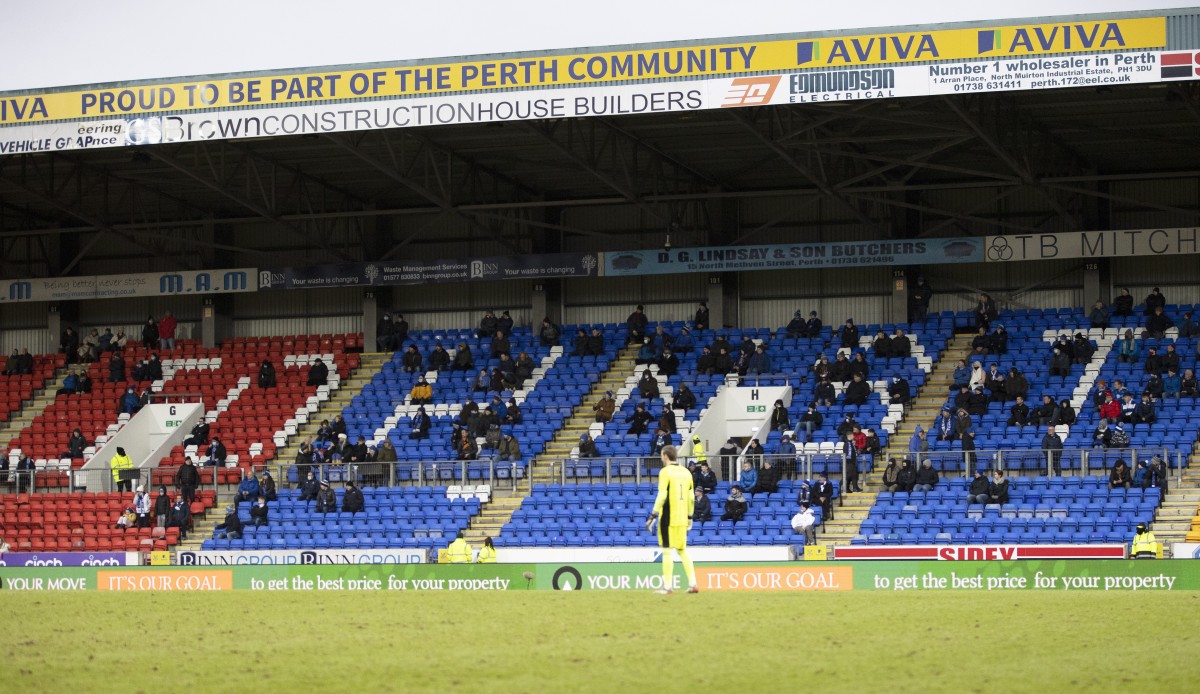 PHOTO: Only 500 fans were allowed in McDiarmid Park today as new Covid-19 rules came into force

Before the second half could get underway Saints made a double change as Liam Craig and Chris Kane came on to replace Craig Bryson and Ali Crawford.

The Bhoys started the second half strongly and on 47 minutes Rogic picked out Abada in the box but Parish was alert to the danger as he touched the ball over for a corner. Then 3 minutes later the visitors were awarded a free kick after Rogic had been fouled by Butterfield however, Bitton’s effort from the free kick went high into the North Stand.

Saints third change of the game came on 63 minutes as Glenn Middleton came on to replace Stevie May.

Saints were now starting to see more of the ball and on 69 minutes they pulled a goal back. Viv Solomon-Otabor went on a good run down the right before sending over a delightful cross which Kane got on the end of it to plant a superb header past Vasilis Barkas. 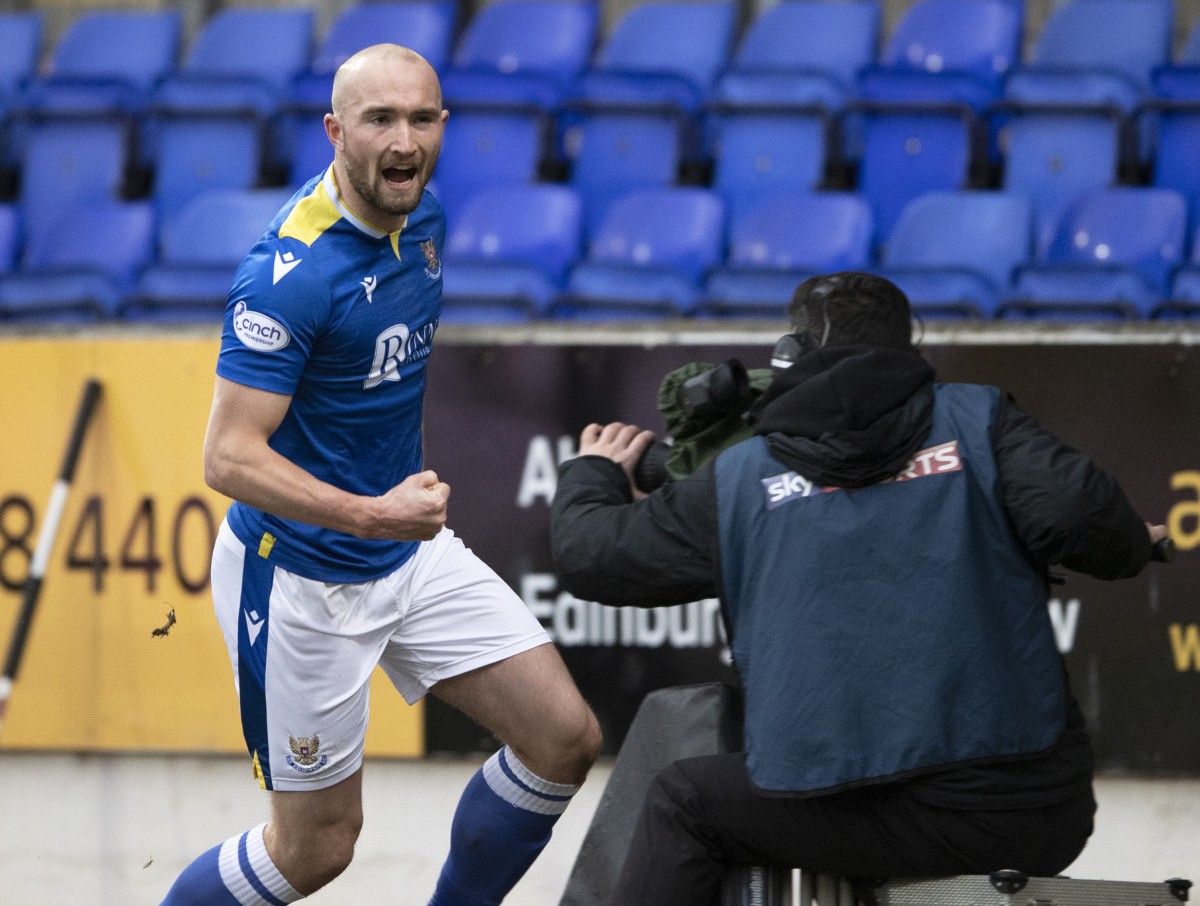 The goal gave Saints some much needed confidence as they now went in search of the equaliser and shortly after Barkas had to be quick off his line to prevent Middleton from getting a strike at goal.

Saints were now enjoying a good spell in the match and on 78 minutes Middleton setup Butterfield on the edge of the area but the 20 yard effort from the midfielder went inches wide. Saints also had a claim for a penalty as James Brown went down in the box under the challenge from Carl Starfelt but referee Bobby Madden wasn’t interested as he waved play on. 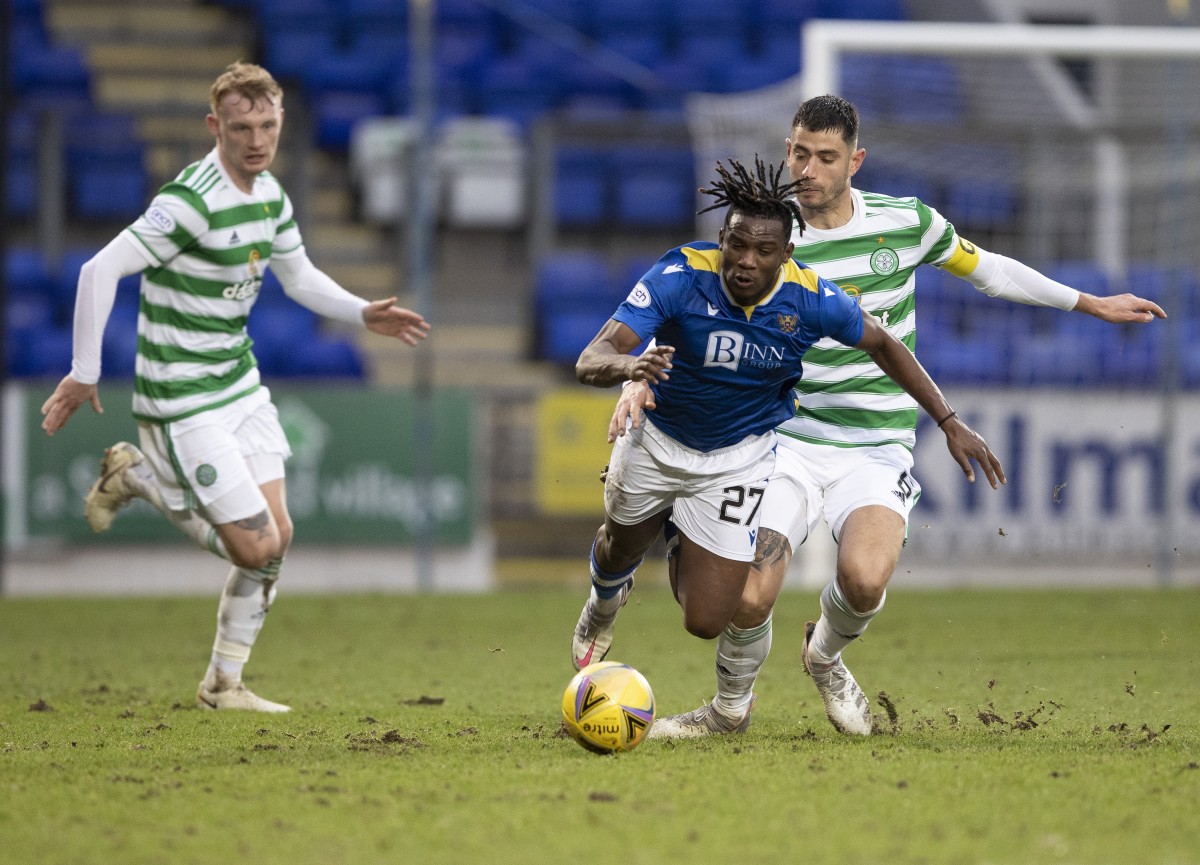 However, with 8 minutes remaining Bitton restored Celtic’s two goal advantage. Rogic picked out the midfielder on the edge of the area and Bitton then guided a low effort into the bottom corner of the net to make sure of the points for the visitors.

The final chance of the game fell to the visitors as young Celtic forward Joey Dawson thought he had got his first goal for the Parkhead club on 86 minutes as he dinked the ball over Parish however, Callum Booth made a great defensive clearance to clear the ball off the line.

Picture: Jacob Butterfield slips the ball through for Stevie May