Liam Craig made his 442nd appearance for Saints this afternoon to become the club’s all-time appearance record holder as Saints defeated Dundee 3-1 at McDiarmid Park.

Saints were 2-0 up by half time thanks to a Chris Kane double. The Saints forward gave Saints the lead on 31 minutes as he finished a great team move, converting a Michael O’Halloran cut-back. Then 8 minutes later Kane scored his and Saints second as he got on the end of Stevie May’s ball across the face of the Dundee goal.

May then ended the game as a contest 40 seconds in the second half as he produced a fine finish, after being setup by O’Halloran.

Dee defender Ryan Sweeney pulled a goal back for the visitors with 16 minutes remaining however, Saints were able to see the game out to ensure Liam Craig tasted victory on his special day.

Saints are back in action a fortnight when they welcome Livingston to Perth, kick off 3pm.

Dundee were the visitors to McDiarmid Park this afternoon as Saints looked to bounce back from their 1-0 defeat at Hibs last Sunday. Callum Davidson made two changes to his starting eleven for this afternoon’s Tayside derby as Hayden Muller dropped to the bench and Jamie McCart missed out after getting sent off at Easter Road and they were replaced by Lars Dendoncker, who was making his first start for the club after joining on-loan from English Premiership side Brighton and Hove Albion at the end of August, and Stevie May. Liam Craig captained the team today and it was a special afternoon for the midfielder as he made his 442 appearance for Saints to become the club’s all-time appearance record holder, breaking the previous record which was held by Steven Anderson. Dundee also lost 1-0 last weekend as a first half strike from Joe Aribo saw Rangers leave the City of Discovery with all 3 points. There were also two changes to Dundee’s starting eleven this afternoon as James McPake brought in Paul McGowan and Jason Cummings to replace Max Anderson and Leigh Griffiths.

It was a dreich afternoon in Perth as Paul McGowan got the match underway for the visitors.

Saints created the first chance of the match on 7 minutes as good persistence by Michael O’Halloran saw him break to the by-line, holding off the challenge from Liam Fontaine, and he then cut the ball back to the unmarked Stevie May but his side-footed effort went inches wide.

On 11 minutes Jordan Marshall played a good ball down the left channel for The Dee and it was gathered by Paul McMullan, who then cut inside before curling an effort wide of Zander Clark’s left-hand post.

Then shortly after Saints were appealing for a penalty as Chris Kane was grounded in the box but referee Greg Aitken dismissed the appeals.

Dundee were awarded a free kick on 28 minutes after Jason Cummings was fouled by Shaun Rooney. McMullan took the free kick but Rooney was able to get on the end of his delivery as he headed the ball down to David Wotherspoon who cleared the danger.

The breakthrough finally came just after the half an hour mark as Saints took the lead and it was a brilliant team goal. Rooney played in O’Halloran with a delightful pass down the right and he raced into the box before cutting the ball back to Kane who side-footed a low first-time effort into the bottom corner. 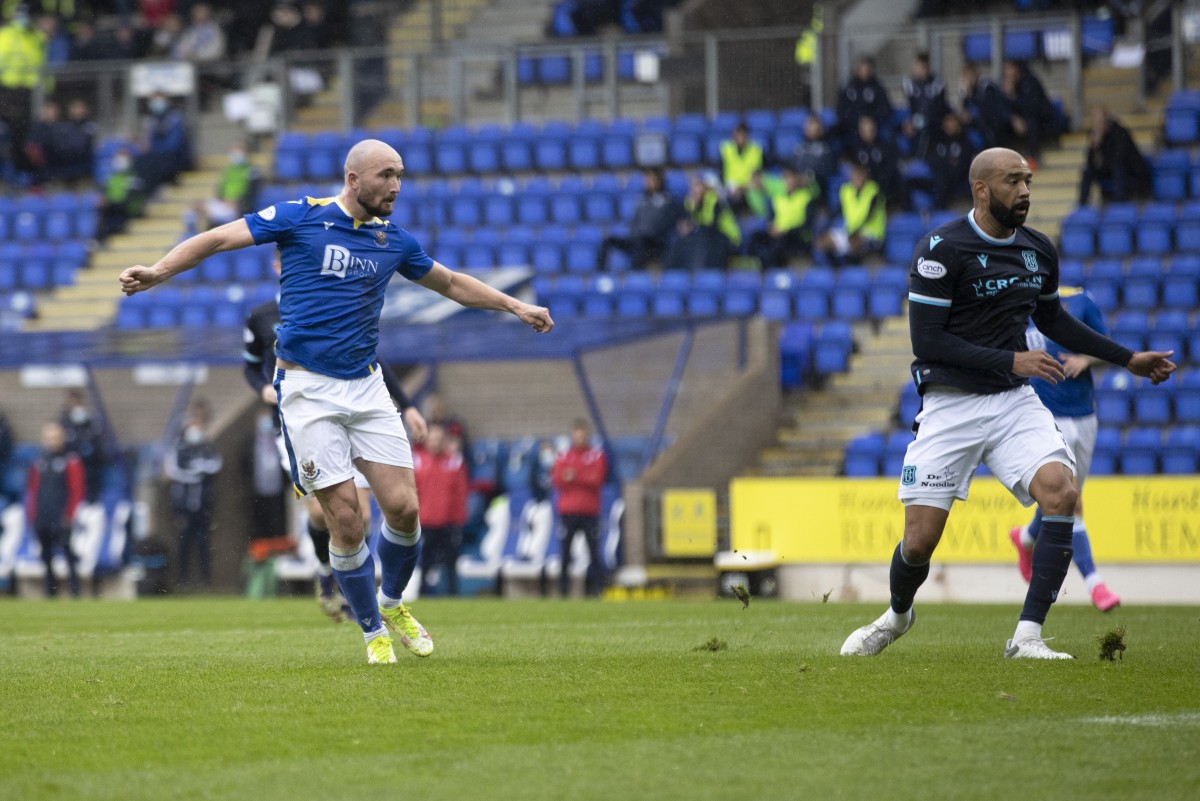 Kane then got his and Saints second of the game 8 minutes later. Wotherspoon played a good pass to May who cut in from the right and sent an inviting ball across the goal and Kane slide in to knock the ball past Adam Legzdins from point blank range. 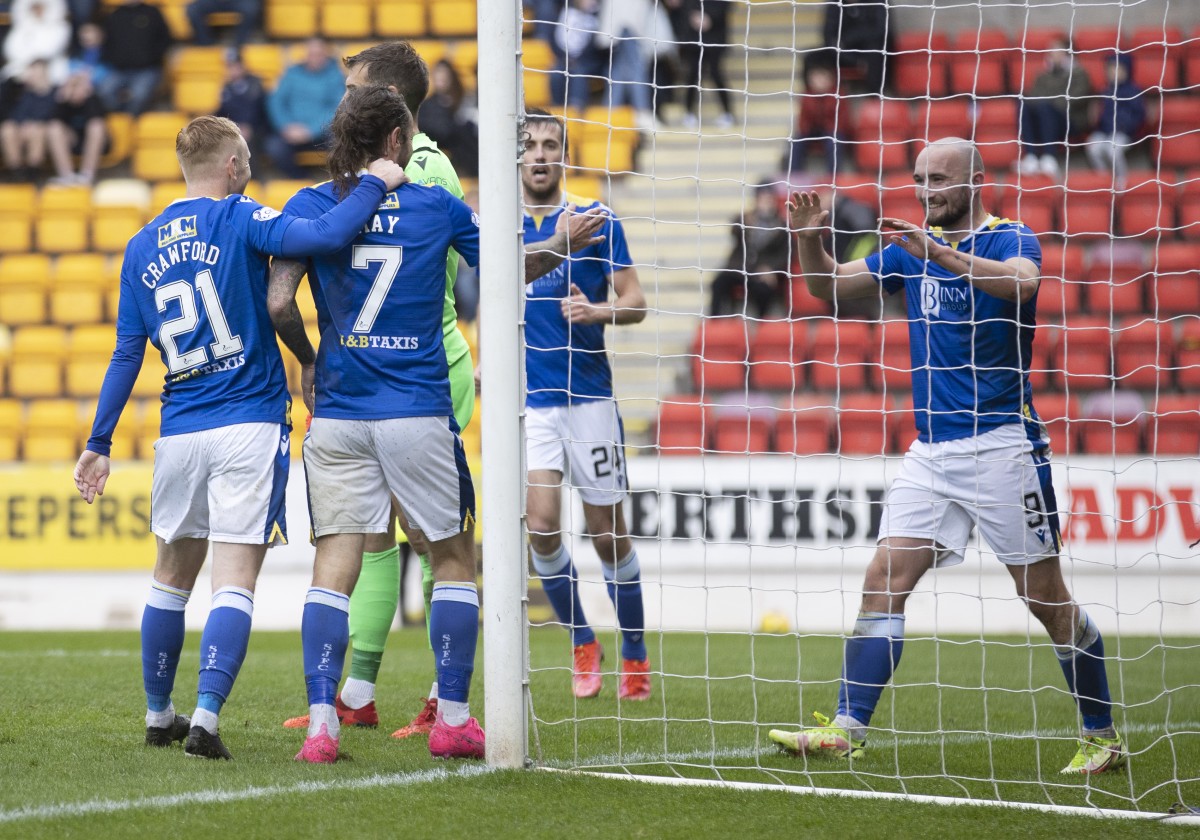 Dundee made a double change before the second half could get underway as Luke McCowan and Cillian Sheridan came on to replace Shaun Byrne and Liam Fontaine.

However, the Dundee substitutes had very little opportunity to settle into the game as Saints got a third goal 35 seconds into the second half. O’Halloran picked out May in the box and the Saints forward turned and sent a fine low effort past Legzdins.

On 51 minutes Jason Cummings broke through for the visitors but Efe Ambrose did enough to put off the forward as he fired wide. 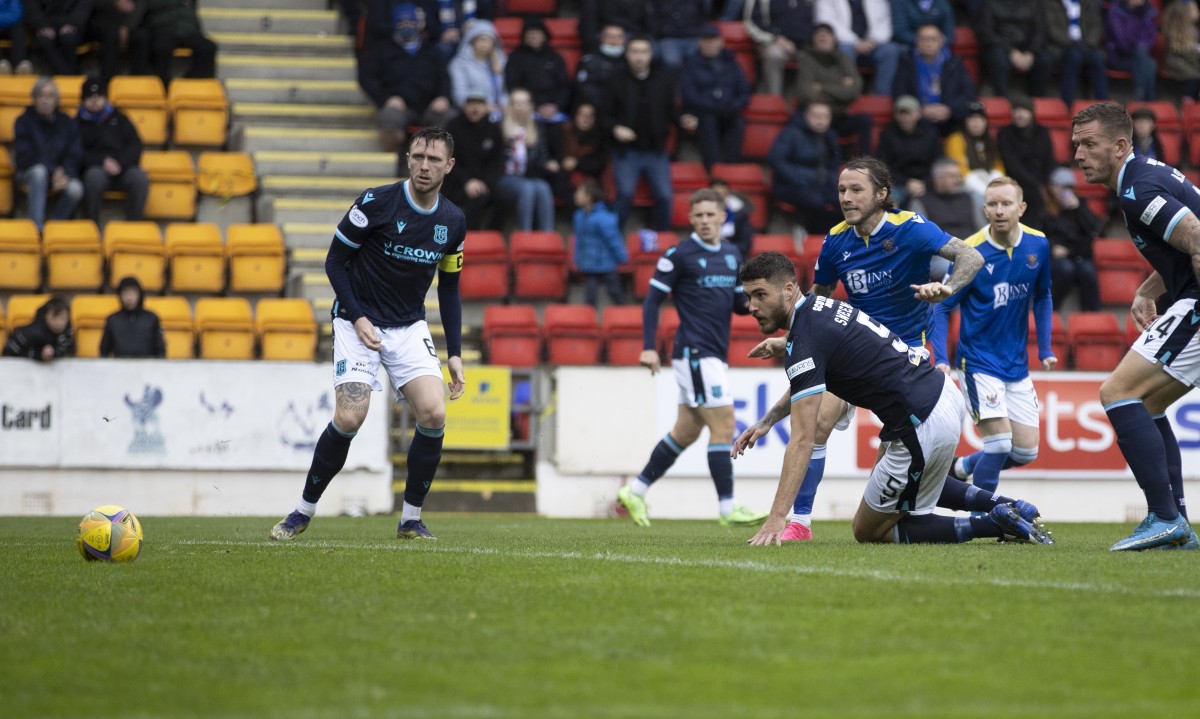 Saints made their first change of the game just before the hour mark as Cammy MacPherson came on to make his debut, replacing Ali Crawford who had picked up a knock.

Saints were playing with confidence and on 62 minutes the ball broke to Rooney and with the Saints fan shouting shoot, the double cup winner let fly with a right-footed effort from distance which was straight at Legzdins. Then 2 minutes later Rooney got on the end of a Craig corner from the right however, his header was cleared off the line.

Zander Clark was rarely troubled for large spells of the game but he was called into action on 69 minutes as Sheridan got on the end of a delivery into the box but Clark comfortably gathered the header from the former Saints player.

The Dee though pulled a goal back with 16 minutes remaining as Paul McMullan’s corner from the left was met by Ryan Sweeny who planted a powerful header high past Clark. That was Dundee’s first goal against Saints since April 2018 when Sofien Moussa scored with 2 minutes remaining to secure a 2-1 win for the Dens Park side.

Saints then made another change as Stevie May was replaced by Glenn Middleton and he almost made an instant impact within a minute of coming on. Kane played in the on-loan winger who raced forward, away from Lee Ashcroft, before dragging his effort wide.

The visitors now had a bit of momentum as they started to apply some pressure on the Saints backline and on 78 minutes McMullan setup Sheridan however, he couldn’t find the target with his effort. Then with 3 minutes remaining Cammy Kerr got on the end of a Marshall cross into the Saints box however, Clark was alert to the danger as he comfortably saved the header.

Despite the late pressure from the visitors Saints saw the game out to secure a well-deserved 3 points on what was a special day for Liam Craig to mark his record-breaking 442 appearance for Saints. 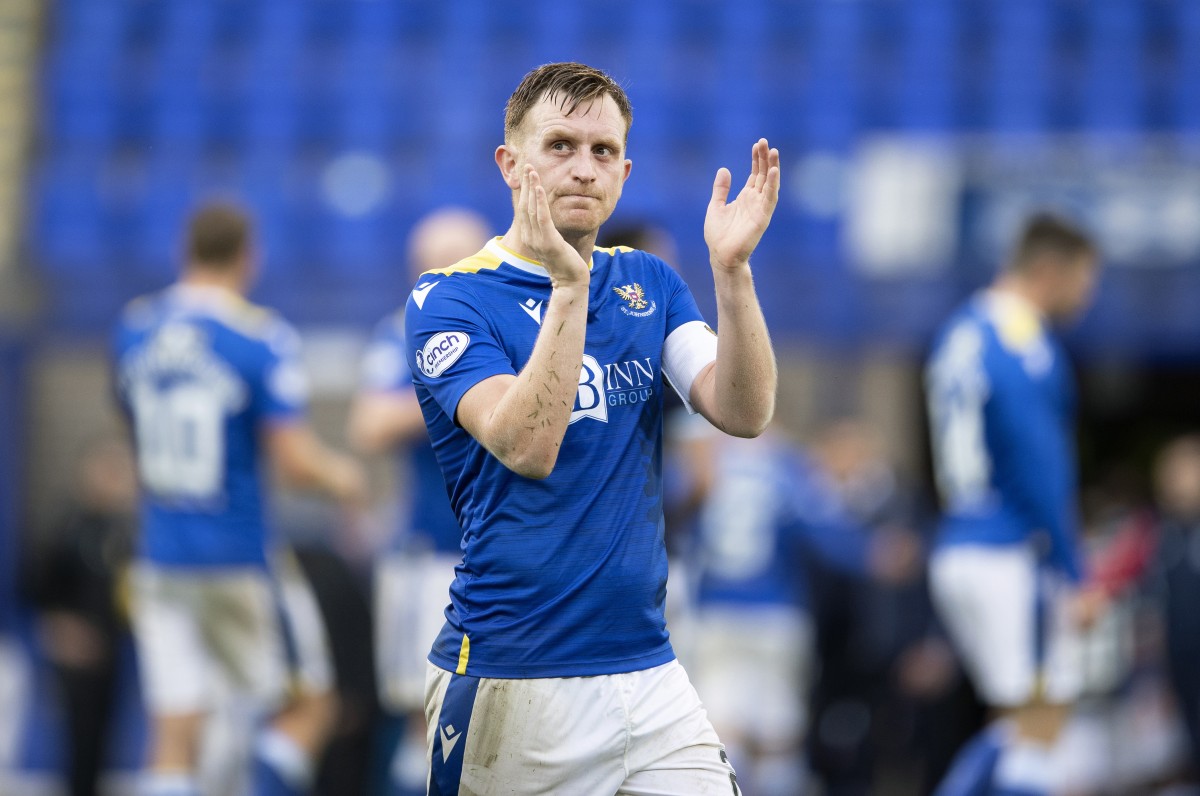 Picture: Liam Craig who was making is 442nd appearance for Saints this afternoon celebrates with the fans after Chris Kane opened the scoring