The battle of the Saints ended goalless in Paisley this afternoon as both sides had to settle for a point.

St Mirren thought they had taken the lead on 9 minutes as Conor McCarthy headed home a Scott Tanser free kick however, the goal was ruled out for offside.

Saints created opportunities throughout the first half as both Callum Hendry and David Wotherspoon saw efforts saved by Jak Alnwick. Saints also had Zander Clark to thank as the Saints number one made an excellent point-blank save to deny Richard Tait on the stroke of half time.

Glenn Middleton came close to winning it for Saints late on as his dipping free kick from 20 yards cannoned off the crossbar.

The hosts were then reduced to ten men in stoppage time as Ethan Erhahon was shown a second yellow card for a foul on Chris Kane.

Next up for Saints is a home game against Rangers in a fortnight, kick off 12:30pm.

After Thursday’s 2-0 defeat to LASK in the UEFA Europa Conference League Play-off’s Saints returned to league action this afternoon as they made the trip to Paisley to take on St Mirren at The SMiSA Stadium. There were six changes to the Saints starting eleven for today’s match as Callum Davidson brought in Reece Devine, Hayden Muller, Liam Craig, David Wotherspoon, Callum Hendry and Stevie May and they replaced James Brown, Callum Booth, Murray Davidson, Michael O’Halloran, Glenn Middleton and Chris Kane. St Mirren lost 6-0 at Celtic last weekend and manager Jim Goodwin made three changes to his team this afternoon. Richard Tait, Charles Dunne and Eamonn Brophy came in to replace Ryan Flynn, Greg Kiltie and Alan Power, who was suspended after getting sent off last Saturday at Celtic Park.

Stevie May got the match underway for Saints and it was the Perth side who created the first opportunity of the game after 7 minutes. David Wotherspoon found himself in space just outside the box however, Jak Alnwick was equal to the effort from the Canadian internationalist.

Then a minute later the Paisley Saints were awarded a free kick after Curtis Main and been fouled by Jamie McCart. Former Saints player Scott Tanser floated the free kick into the box and Conor McCarthy got up well to head the ball into the net but the goal was ruled out by the Main Stand assistant as the Irish defender was adjudged to have been in an offside position.

Saints very quickly switched play up the other end as May was awarded a free kick after he had been fouled by Marcus Fraser. Liam Craig took the free kick and his delivery was met by the head of Jamie McCart but Alnwick comfortably gathered the ball. 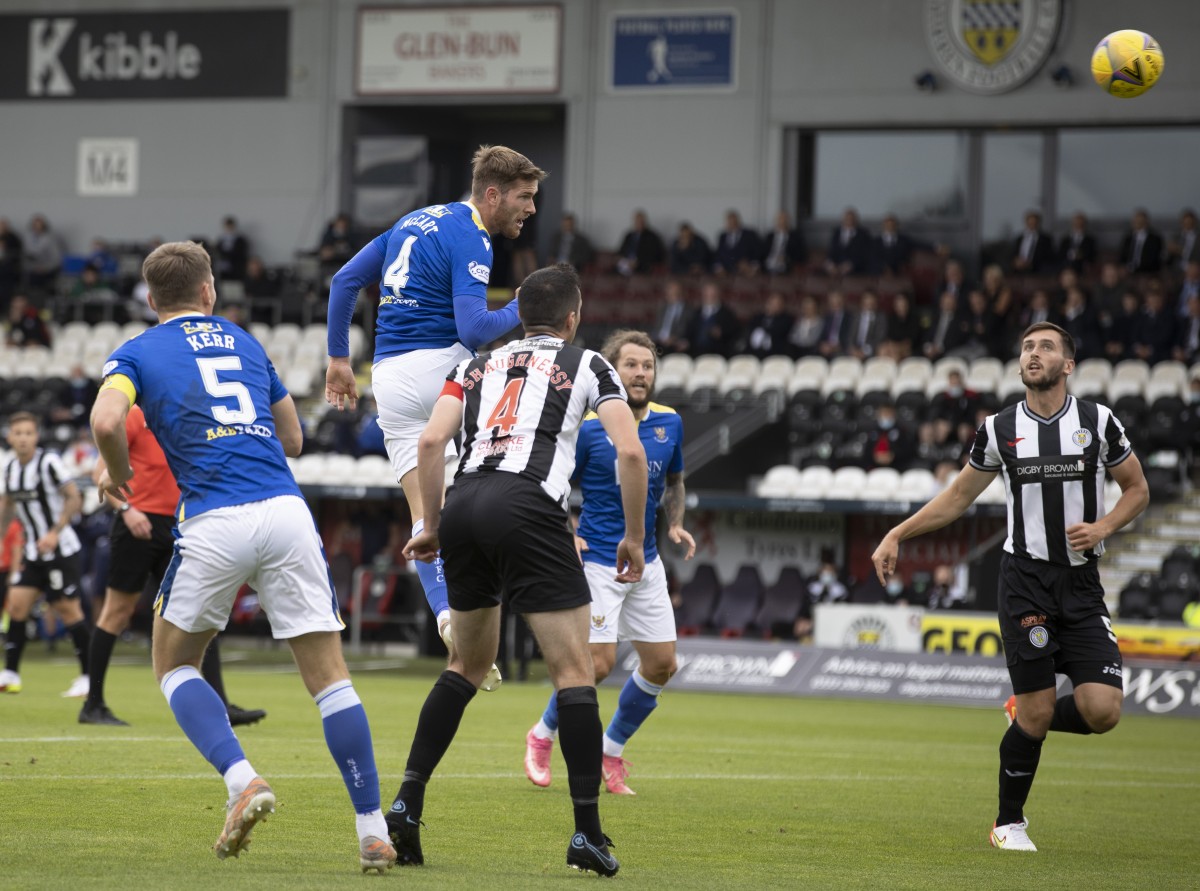 On 16 minutes Saints created another chance as McCart’s cross into the Buddies box was flicked on by May but his effort went inches wide.

Then 2 minutes later St Mirren created a good chance to open the scoring as Jamie McGrath headed the ball past McCart as he burst into the Saints box before picking out Curtis Main in the centre of the box but Zander Clark got down well to make a strong save. The loose ball then broke to McGrath but Hayden Muller made a fantastic sliding block to deny the midfielder.

Both sides continued to create chances and on 24 minutes Saints won the ball in midfielder as Ali McCann broke forward before slipping a neat pass to Wotherspoon whose delivery into the box was met by May but he was unable to direct his effort on target.

Then a minute later Marcus Fraser saw his ball into the Saints box met by Curtis Main but the header from the former Motherwell and Aberdeen forward was straight at Clark.

It was a lively match and on 28 minutes Wotherspoon’s cross from the left picked out Callum Hendry but the diving header from the Saints forward was smartly saved by Alnwick as he turned the ball behind for a corner.

The hosts then created several chances to just after the half an hour mark as firstly Buddies captain and former Saints player Joe Shaughnessy put his header from a Richard Tait cross wide. Then on 32 minutes another former Saints player Scott Tanser got on the end of a McGrath cross but he saw his left footed effort go wide. Tait was involved in the thick of the action again 2 minutes later this time setting up Eamonn Brophy but the forward didn’t trouble Clark with his effort.

With 6 minutes of the first half remaining Saints won another corner as Wotherspoon’s 20-yard strike took a deflection off Shaughnessy but Alnwick got down well to turn the ball behind. Wotherspoon took the corner from the left and his deep delivery was headed back across goal by Jason Kerr but Alnwick was quick off his line to gather the ball.

There was one minute added on at what was an action packed first half and there was still time for one more chance. A free kick from the left was played deep into the Saints box and it looked like Tait was going to score but Clark made an incredible save to deny the defender from point-blank range.

On 53 minutes the home side were awarded a free kick on the edge of the box after McGrath had been fouled by McCann. McGrath took the free kick and his deep delivery to the back post was cleared by the Saints defence. St Mirren then created another opportunity 2 minutes later as Tanser’s low delivery was flicked inches wide by Main. 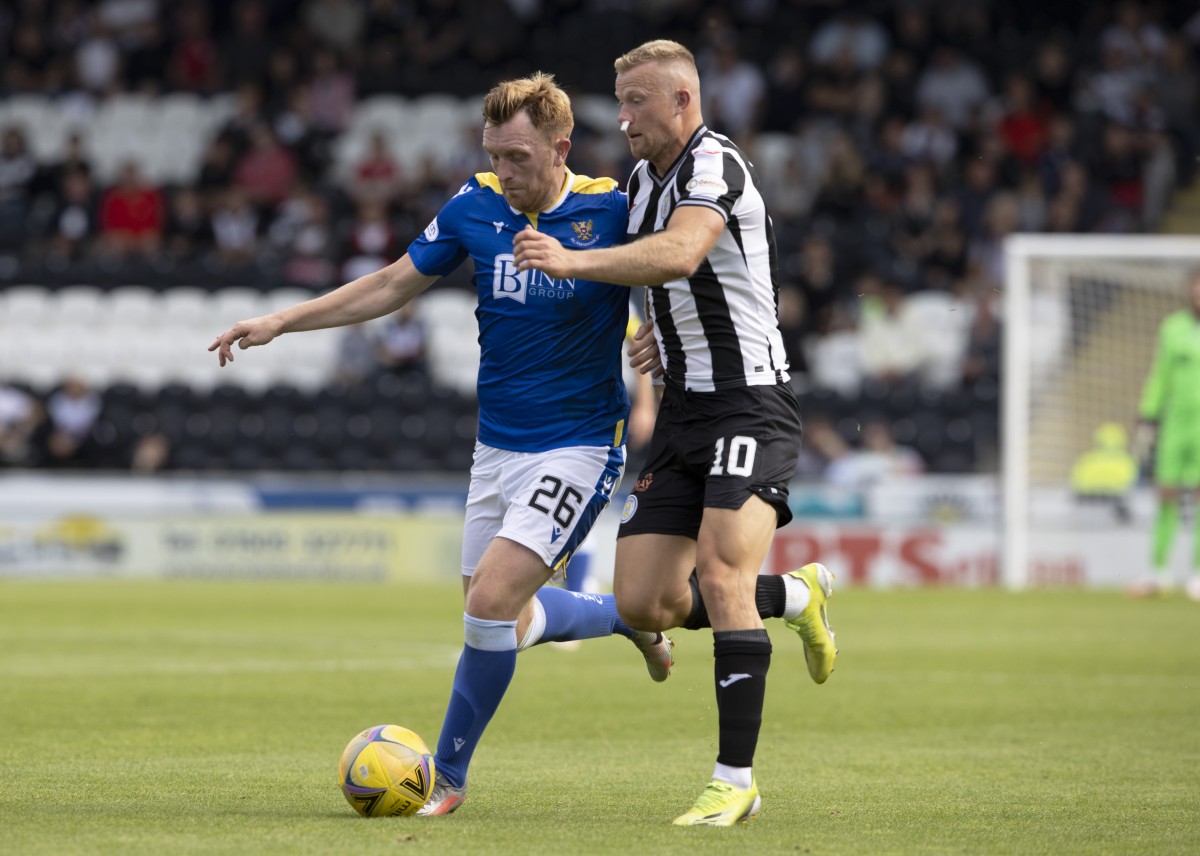 Just after the hour mark Wotherspoon was booked for stopping Brophy in his tracks. From the resultant free kick Tanser delivered it deep into the box and McCarthy was inches away from making a connection with it.

On 63 minutes a Reece Devine cross from the left was met by McCann but his header was straight at Alnwick. Callum Davidson then made his first change of the game as Glenn Middleton came on to replace Callum Hendry. That was followed by another change shortly after as Stevie May made way for Chris Kane.

With 12 minutes remaining great skill by Shaun Rooney out on the right saw him cut inside and his cross picked out Middleton however, his low effort was saved by Alnwick. Then shortly after Rooney had a chance of his own but he saw his powerful effort from distance go wide.

It was a good spell in the game for Saints and Rooney linked up well with Middleton down the right and the on-loan Rangers winger then cut inside before trying to pick out McCann with his delivery into the box but Ethan Erhahon got a touch on the ball to take it away from the Northern Ireland internationalist.

Saints then made their third change of the game on 81 minutes as Callum Booth replaced Reece Devine.

Saints were on top in the closing stages and they were awarded a free kick 20 yards from goal after Hayden Muller was halted in his tracks by Shaughnessy after the on-loan defender had went on a mazy run deep into The Buddies half. Middleton took the free kick and he saw his dipping effort smash off the bar with Alnwick rooted to the spot. 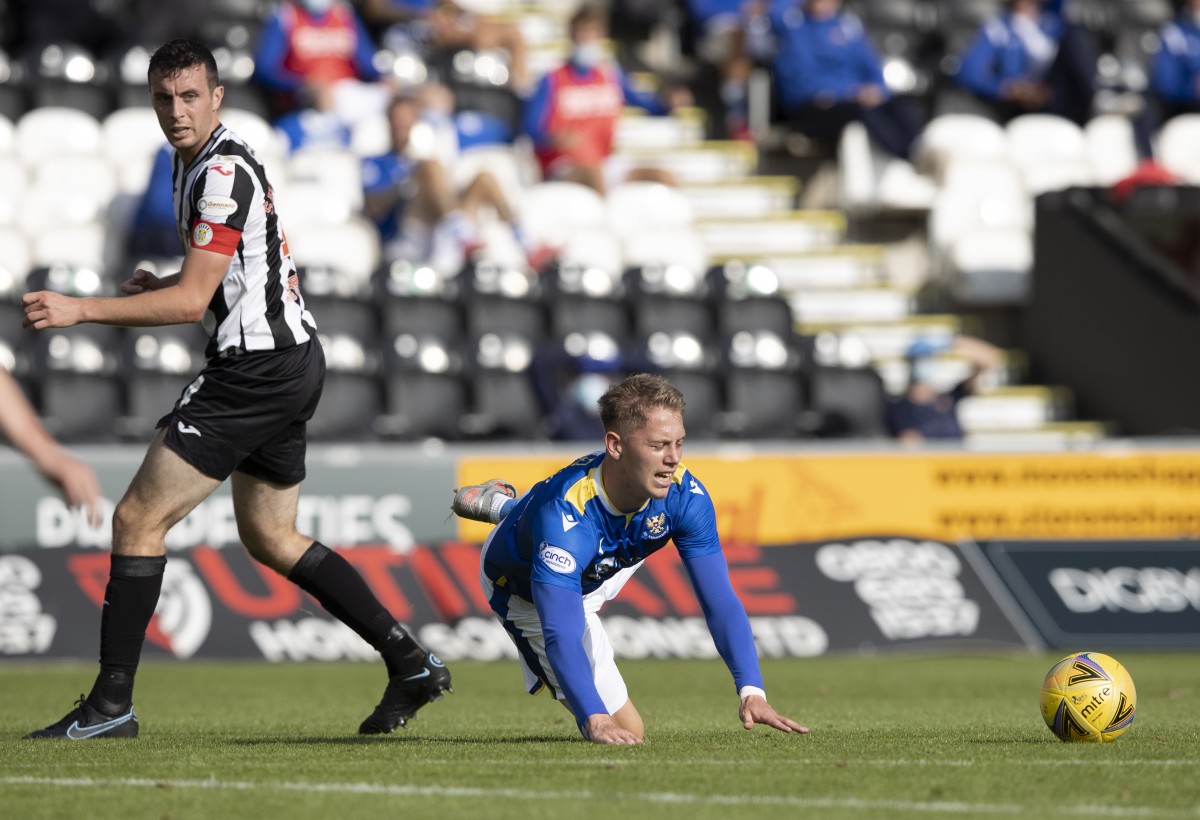 PHOTO: Hayden Muller is taken out by Joe Shaughnessy

As the match progressed into 3 minutes of stoppage time The Buddies were reduced to ten men after Erhahon picked up a second booking for a foul on Kane. The St Mirren midfielder had been booked earlier in the half for foul on the Saints forward. Now with the man advantage Saints pushed for the winner and the closest they came was a Wotherspoon effort but he was unable to direct it on target as Saints had to settle for a point.