Two goal in two second half minutes saw Saints book their place in the Scottish Cup final this afternoon with a 2-1 win against St Mirren at Hampden Park.

After a goalless first half in which Saints created numerous chances Callum Davidson’s side took the lead on 72 minutes as Chris Kane converted a Glenn Middleton cross into the box. Then 2 minutes later Saints doubled their advantage as Middleton scored a glorious free kick.

Conor McCarthy pulled a goal back for the Buddies with 4 minutes remaining which setup a nervous end to the game. However, Saints should great game management to see the game out and book a return trip to Hampden on May 22nd when they will take on Hibernian in the final.

Next up for Saints is a return trip to Glasgow on Wednesday evening as they take on Celtic at Celtic Park, kick off 6:30pm.

It was Scottish Cup semi-final weekend as Saints made the trip to Hampden to take on St Mirren, with the winner facing Hibs in the final. Saints won 1-0 at Hibs last weekend and Callum Davidson made four changes to his starting eleven for this afternoon’s game. Zander Clark, Shaun Rooney, David Wotherspoon and Guy Melamed came into replace Elliott Parish, James Brown, Michael O’Halloran and Glenn Middleton. There was also a place on the bench for goalkeeper Zdeněk Zlámal who had joined Saints on an emergency seven-day loan on Friday. St Mirren lost 2-1 at home to Hamilton Accies last Saturday and Jim Goodwin also made four changes to his team. Daniel Finlayson, Jay Henderson, Cammy MacPherson and Collin Quaner dropped out and were replaced by Marcus Fraser, Jamie McGrath, Ilkay Durmuş and Lee Erwin.

David Wotherspoon got the match underway for Saints and they created their first chance of the match on 6 minutes as a good flowing move forward saw Wotherspoon cross the ball to Guy Melamed who slipped it into the path of Craig Bryson but the strike from the Saints midfielder was straight at Jak Alnwick. Melamed and Bryson linked up again 3 minutes later but this time Bryson’s effort didn’t trouble Alnwick. 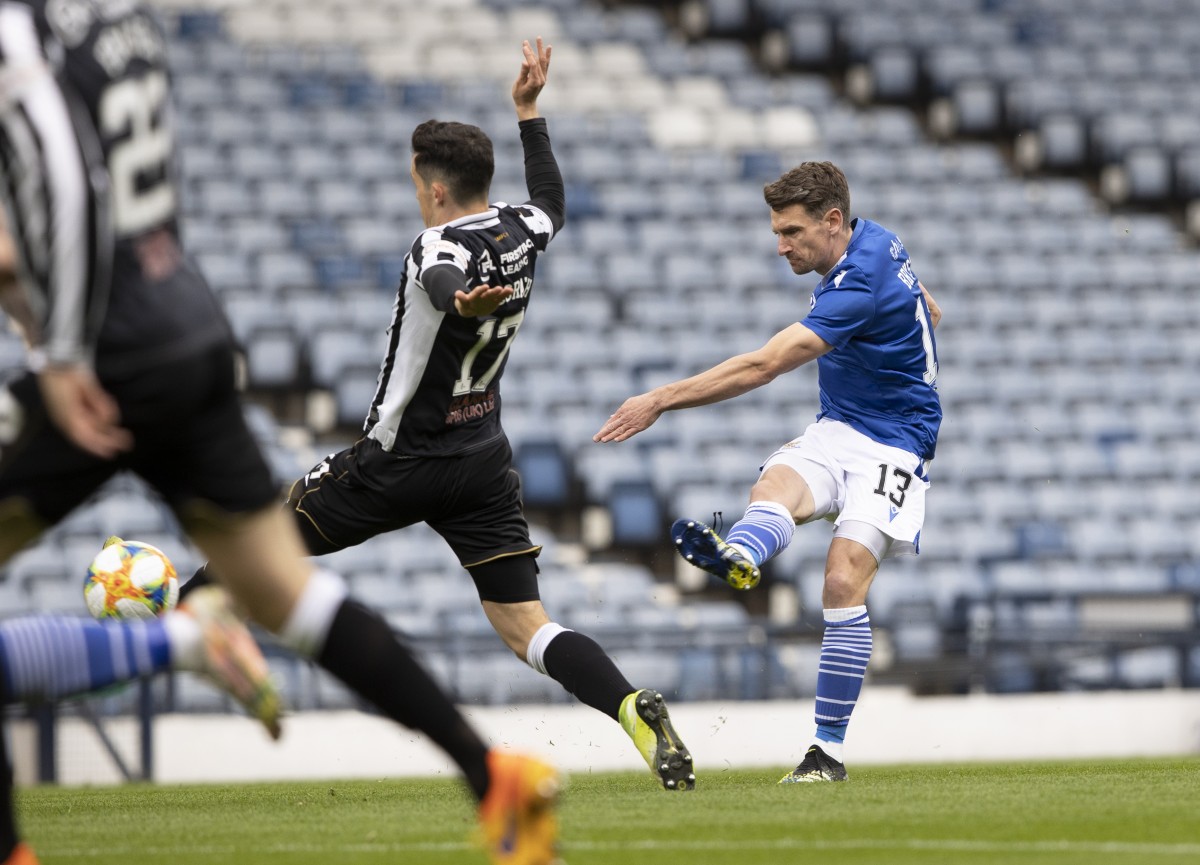 PHOTO: Craig Bryson has a shot at goal

Saints continued to grow into the game and on 16 minutes they were awarded a free kick after Wotherspoon had been fouled. Wotherspoon took the free kick but his delivery into the St Mirren box was only cleared as far as Bryson who sent over another cross into the box, picking out Rooney, whose header went wide of Alnwick’s left-hand post.

The Perth Saints continued to create the better opportunities and on 20 minutes Ali McCann saw his deflected shot comfortably gathered by Alnwick. Then 3 minutes later a curling Rooney effort was tipped behind for a corner by the St Mirren number one. The pressure on the St Mirren goal continued and shortly after Callum Booth curled an effort wide.

The chances kept on coming for Saints and Melamed linked up well with Chris Kane on 27 minutes as the latter switched the ball onto his left foot before unleashing a powerful effort that went narrowly over.

Despite Saints dominating the possession, the Buddies almost took the lead just after the half an hour mark. Kristian Dennis put over a cross into the box from the left which was met by Lee Erwin but Zander Clark made a wonderful close range save to deny the St Mirren forward.

Saints thought went back on the attack and on 37 minutes Rooney went on a mazy run down the right before picking out Melamed with his cross but the first-time effort from the Israeli forward went wide.

On 54 minutes Ilkay Durmuş took advantage of a slip by Rooney as he broke into the Saints box but Clark made another good save to keep to score level.

Then 3 minutes later Wotherspoon gathered the ball on the edge of the Buddies box and he moved the ball onto his left foot before seeing his effort go inches wide.

Just after the hour mark St Mirren got a great chance to break the deadlock as Durmuş raced away from Rooney before sending over a cross into the Saints box which substitute Collin Quaner made a connection with but he somehow dragged his effort wide.

On 65 minutes Booth showed great energy to break down the left before trying to pick out Bryson with a pass but the ball was cut out, breaking to Chris Kane, but the Saints number nine put his effort over.

Saints then made their first change of the game as Glenn Middleton replaced Guy Melamed.

On 72 minutes Saints took the lead and substitute Middleton would play his part in the build-up. Booth passed the ball to Middleton, whose first-time cross was perfect for Kane who slid in to knock the ball past Alnwick to put Saints one up. 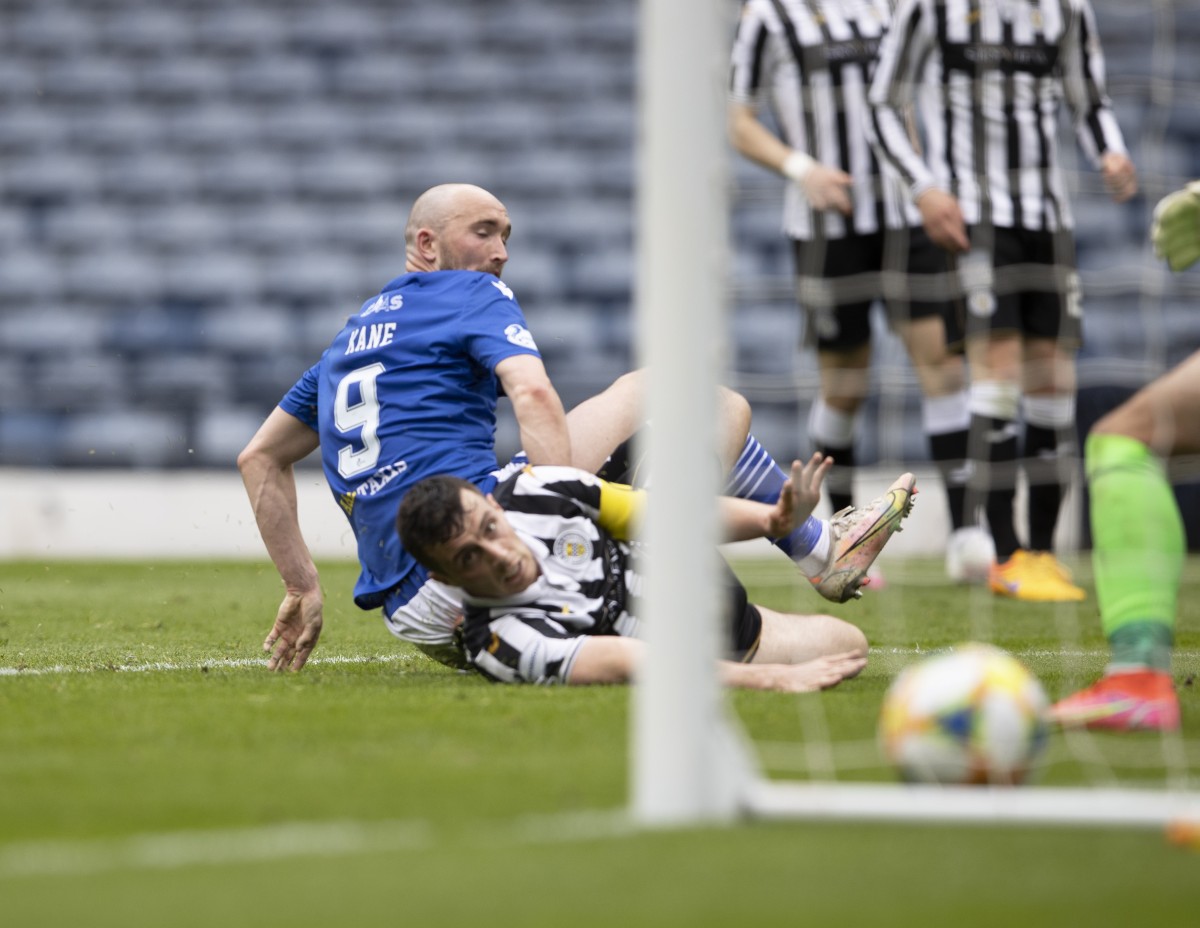 It got even better for Saints 2 minutes later as they got a second goal. Saints were awarded a free kick after a foul on Middleton by former Saints player Joe Shaughnessy. Both Wotherspoon and Middleton stood over the free kick but it was the latter who took it and he curled an absolute beauty into the top right corner to double Saints advantage. 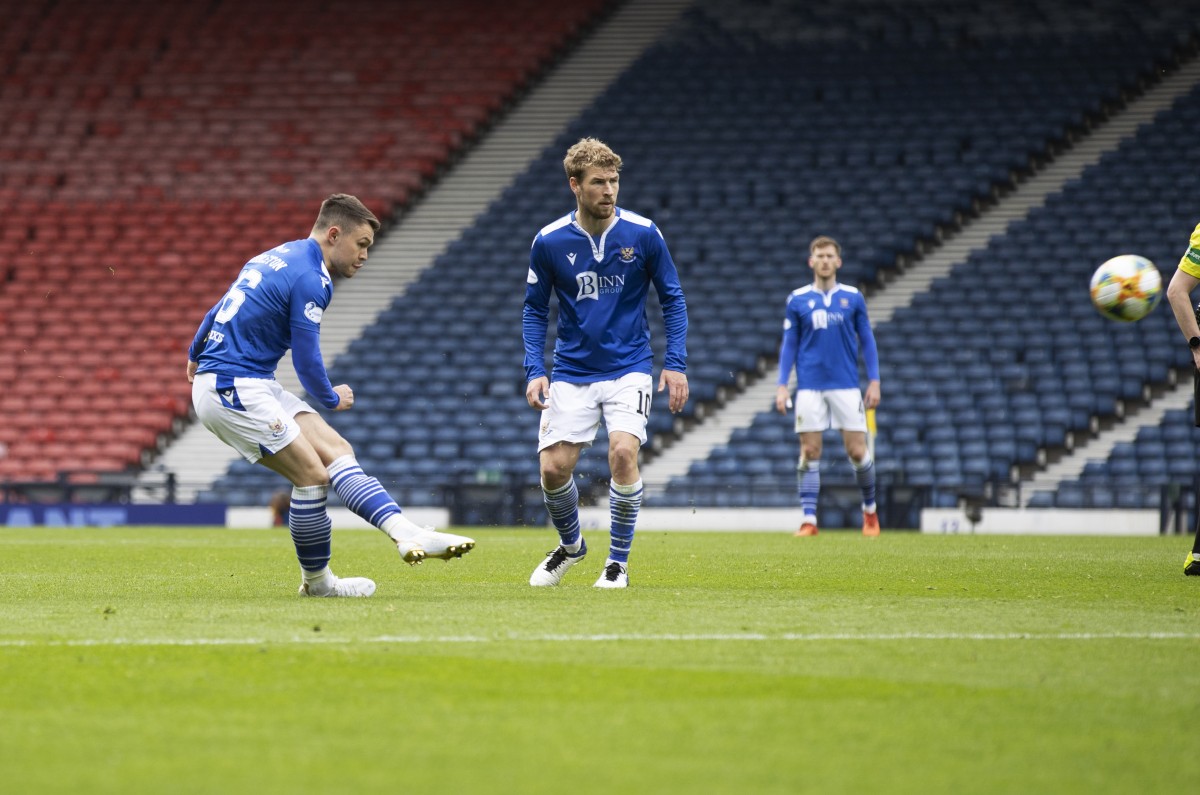 Middleton was causing problems for the Buddies down the left and on 78 minutes he did well to turn Jamie McGrath before picking out Rooney was another delightful ball across the box but Alnwick made a strong one-handed save to turn Rooney’s header behind for a corner.

However, with 4 minutes remaining St Mirren pulled a goal back. The Paisley side were awarded a free kick after substitute Eamonn Brophy was fouled by Jason Kerr. McGrath took the free kick and his delivery into the box was met by Conor McCarthy who headed the ball past Clark to make the closing stages interesting.

The Buddies then almost got an equaliser on 87 minutes as Brophy flashed a curling effort inches wide of Clark’s right-hand post.

It was a nervous final couple of minutes of the match for Saints and in the first minute of the three minutes of stoppage time added on McGrath saw his half volley from the edge of the box go narrowly over.

That was as close as St Mirren got in stoppage time as Saints showed great game management to see the game and book their return to Hampden on May 22nd for the Scottish Cup final against Hibernian.