A last minute Hibs goal saw ten-man Saints slip to defeat on the opening day of the new cinch Premiership season this afternoon.

Saints were reduced to ten men just before the hour mark as Murray Davidson was sent off for a late challenge on Ryan Porteous.

The new look Saints backline defended well however, Hibs pressure eventually told in the final minute of the match as substitute Josh Campbell headed home via a deflection off Cammy MacPherson to had the visitors all 3 points.

Saints are back in action next Saturday as they take on Motherwell at Fir Park, kick off 3pm.

The new cinch Premiership season got underway this afternoon as Saints welcomed Hibs to McDiarmid Park. Saints defeated Ayr United 1-0 last Saturday in a Premier Sports Cup Group F match and Callum Davidson made five changes to his starting eleven today. Remi Matthews made his debut in goals and there was also first starts for Ryan McGowan and Alex Mitchell. In addition to this Murray Davidson and Theo Bair also came into the starting eleven as they replaced Dan Cleary, who departed the club earlier this week to join Shamrock Rovers, whilst Elliott Parish, James Brown Cammy MacPherson and Stevie May all dropped to the bench. Hibs faced Greenock Morton in the Premier Sports cup ten days ago and the Championship side were awarded a 3-0 win after Hibs had fielded a player who was subject to a one-match suspension in the competition during the match. New Hibs manager Lee Johnson made three changes to his starting eleven for this afternoon’s match as Lewis Miller and Christian Doidge dropped to the bench and Aiden McGeady missed out due to injury. They were replaced by Marijan Čabraja, Jair Tavares and Élie Youan.

Graham Carey got the new league campaign underway for Saints as the Perth side attacked the North Stand for the first half.

The visitors were awarded the first free kick of the match on 2 minutes after Elias Melkersen was tripped on the edge of the box by Adam Montgomery. Joe Newell took the free kick as he crossed the ball into the Saints box however, Saints were able to clear the danger.

Hibs started the match strongly and on 9 minutes a good passing move down the left saw Ewan Henderson play in Élie Youan and the on-loan St. Gallen forward saw his ball across the box cut out by Ryan McGowan. Rocky Bushiri was the first to the loose ball however, his effort didn’t trouble Remi Matthews.

Saints got a sight of goal on 15 minutes as Drey Wright fed the ball into the feet of Theo Bair but the Canadian forward couldn’t direct his effort on target. 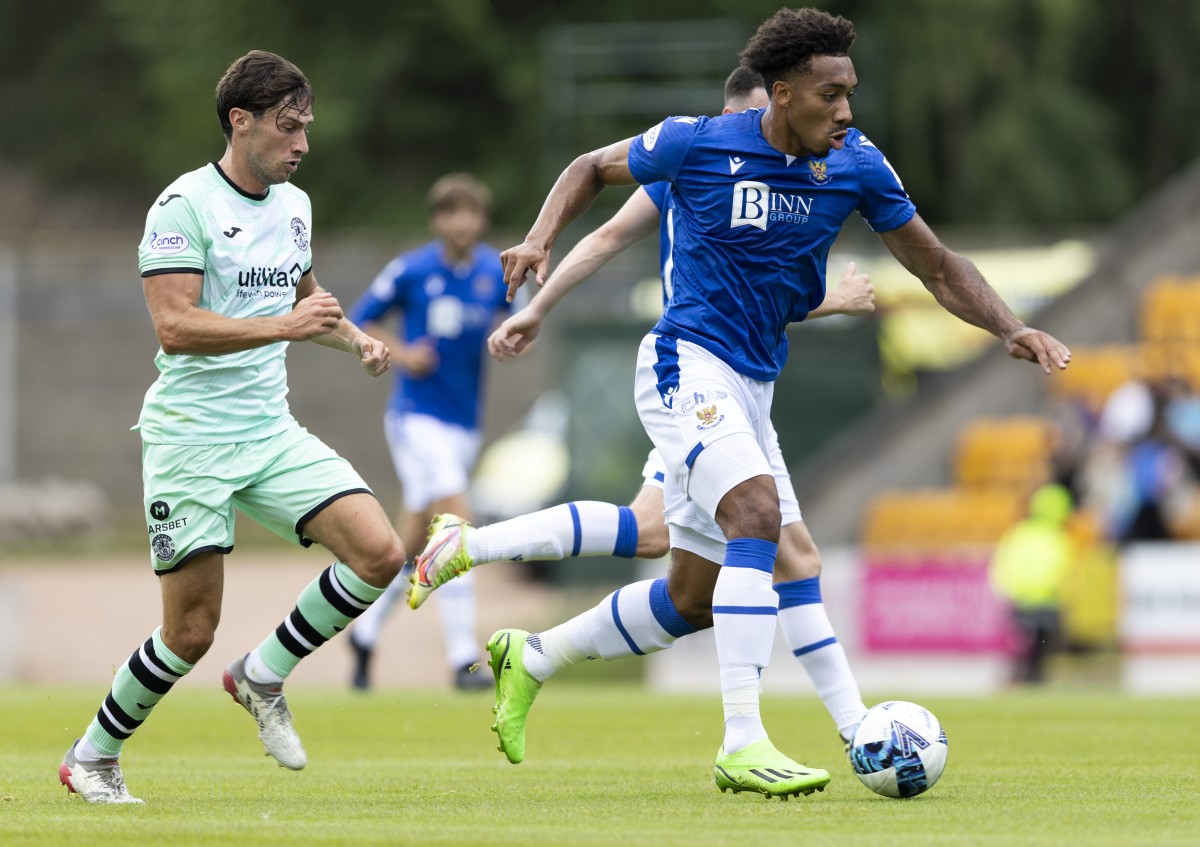 PHOTO: Theo Bair gets away from Joe Newell before shooting wide

Henderson got a great chance to give Hibs the lead on 27 minutes as Marijan Čabraja’s cross from the left picked out the midfielder who made a late run at the back post but he saw his first-time volley go narrowly wide. Then on the half an hour mark Newell played the ball down the left channel to Jair Tavares and the Portuguese midfielder did well to turn McGowan before curling his strike over the crossbar.

Saints made a bright start to the second half and on 47 minutes a good move down the right saw Carey play the ball into Drey Wright and his cross was met by Jamie Murphy however, he couldn’t make a clean connection with the ball as his header went wide. 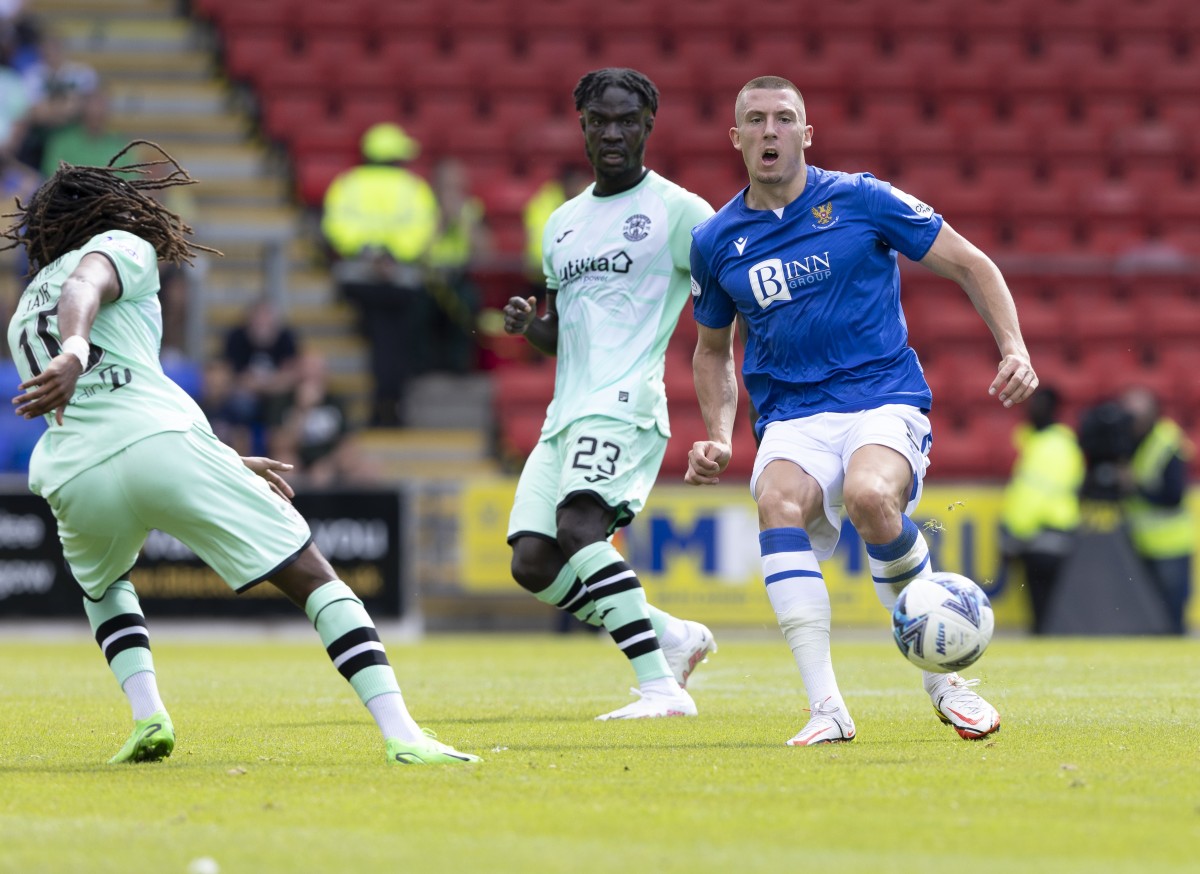 PHOTO: Alex Mitchell gets away from Élie Youan

On 51 minutes a dangerous Chris Cadden cross across the box was cut out by the Saints defence. The loose ball then broke to Čabraja and it looked like his thunderous strike was heading wide however, it took a deflection off Youan but his header didn’t trouble Matthews.

A good Saints move 2 minutes later saw Wright play the ball to Carey who got in behind Ryan Porteous and cut the ball back to Bair however, he couldn’t get his effort away as the Hibs defence cleared the danger.

However, on 58 minutes Saints suffered a blow as they were reduced to ten men. Both Murray Davidson and Ryan Porteous went for the ball and Davidson slid in late and caught the Hibs defender. Referee Euan Anderson took his time and appeared to consult his assistants via his earpiece before showing a red card to the Saints midfielder.

Saints then made a double change as Stevie May and Cammy MacPherson came on to replace Theo Bair and Jamie Murphy. 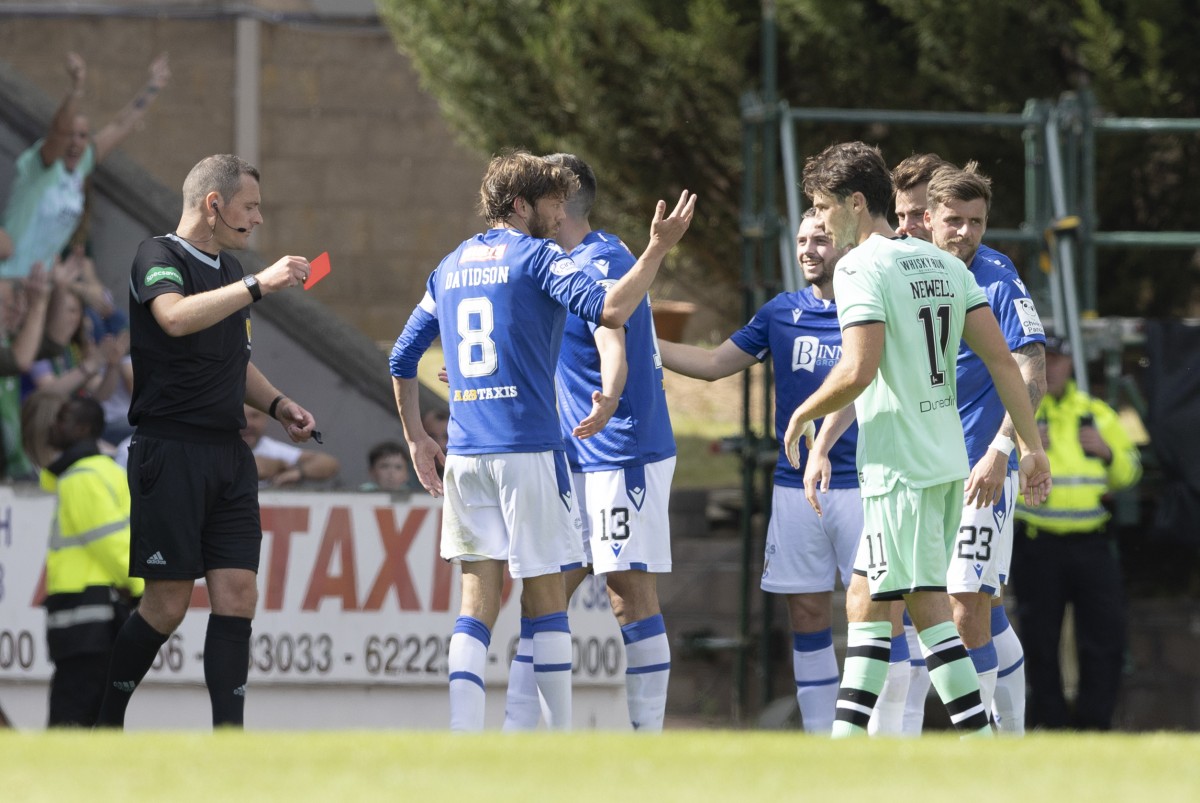 Now with the man advantage Hibs continued to search for the breakthrough and on 64 minutes Henderson saw his shot on the turn go over the bar.

On 67 minutes Montgomery played the ball into the path of Carey who unleashed a strike from 25 yards which David Marshall had to palmed behind for a corner. Melker Hallberg took the corner from the right and his delivery was met by McGowan but his header went well wide.

Hibs continued to create the better of the chances and on 73 minutes Alex Mitchell made great diving header to prevent substitute Christian Doidge slotting the ball home from close range after Newell’s header had got the better of Matthews.

There were shouts for a second red card on 80 minutes as Čabraja clattered into McGowan although the Hibs defender was only shown a yellow card by Anderson. 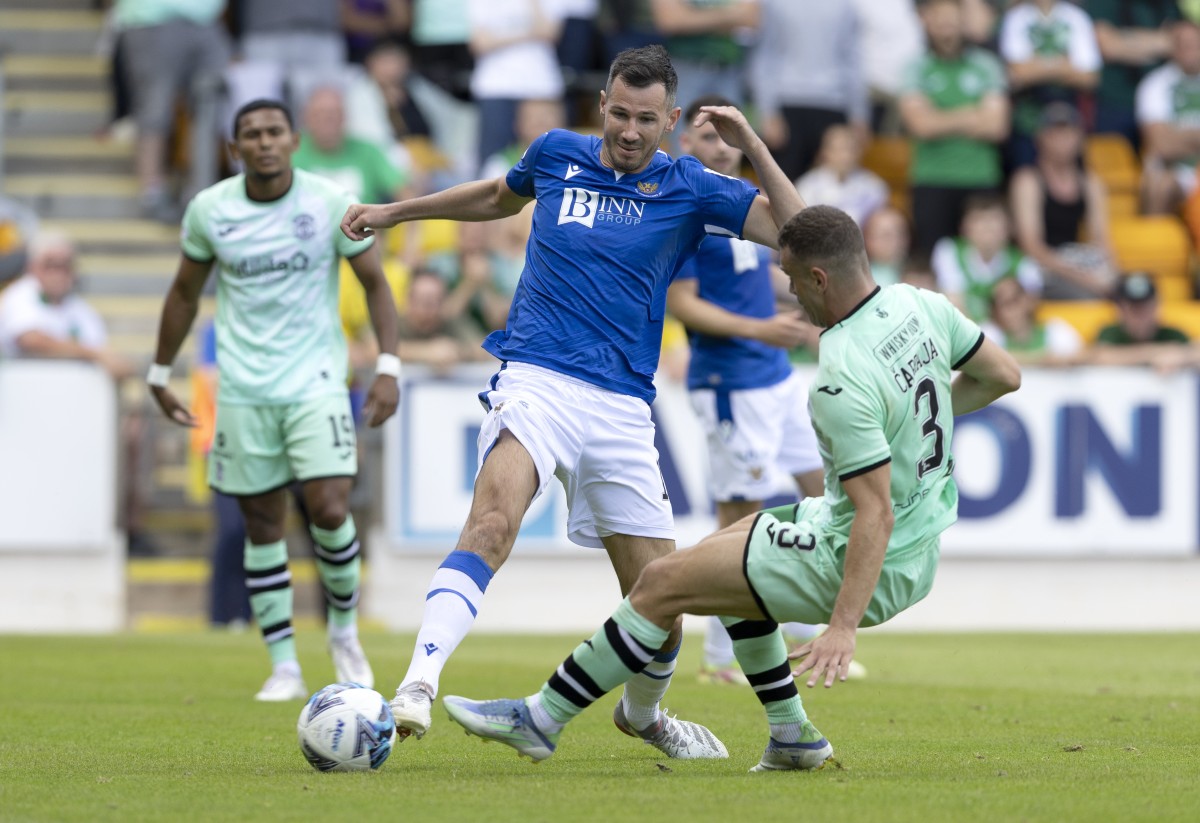 With 5 minutes remaining Saints made another change as Melker Hallberg was replaced by James Brown.

It was looking like ten-man Saints were going to hold out for a draw however, in the final minute of the match Hibs got the winner. A Henderson corner from the left was met by substitute Josh Campbell at the back post and he headed the ball towards goal and it ricocheted off MacPherson before it nestled in the net.