Saints put in a brave performance at McDiarmid Park this evening before eventually going down 4-2 to Galatasaray with the Turkish side winning the match 5-3 on aggregate.

Mbaye Diagne gave the visitors the lead just before the half an hour mark but Saints were back on level terms with 9 minutes of the first half remaining after Galatasaray keeper İsmail Çipe had flapped at Chris Kane’s close range header.

However, in the second half Galatasaray showed their clinical edge as goals from Kerem Aktürkoğlu, Sofiane Feghouli, and Emre Kilinç secured the win for Fatih Terim’s side.

Saints got a second goal deep into stoppage time as Michael O’Halloran tapped home from close range after a great run by Shaun Rooney down the right.

Saints will now drop into the UEFA Conference League play-offs and they will face LASK with the first leg due to take place in Austria next week.

Saints are next in action on Sunday afternoon as they start the defence of the League Cup with a trip to take on Arbroath at Gayfield, kick off 2pm.

McDiarmid Park was packed this evening as Saints welcomed Galatasaray to Perth for the second leg of their UEFA Europa League Third Qualifying Round match. Saints drew 1-1 with Motherwell on Sunday afternoon and manager Callum Davidson made five changes to his starting eleven for this evening’s game. James Brown, Jason Kerr, Murray Davidson, Chris Kane and Michael O’Halloran came in to replace Shaun Rooney, Hayden Muller, David Wotherspoon, Glenn Middleton and Stevie May. Faith Terim made four changes to the side that started last week’s 1-1 draw in Istanbul as İsmail Çipe, Arda Turan, Sofiane Feghouli and Mbaye Diagne came in to replace Fernando Muslera, who was suspended after getting sent off last week, Aytaç Kara, Ryan Babel and Mostafa Mohamed.

The Saints fans were in great voice as Liam Craig got the match underway for the Perth side. Saints were shooting towards the Ormand Stand in the first half and on 4 minutes they were awarded a free kick in a promising position following a foul on Murray Davidson. Craig took the free kick and he floated the ball into the Galatasaray box but The Lions keeper İsmail Çipe comfortably gathered the ball.

The visitors then went on the attack a minute later as Sofiane Feghouli had an effort at goal which was straight at Zander Clark.

It was a lively start to the match as both sides were creating chances and on 17 minutes a slick move down the right by Galatasaray saw Sacha Boey play in Arda Turan but the effort from The Lions captain was saved by Clark.

The visitors took the lead just before the half an hour mark as Kerem Aktürkoğlu played in Mbaye Diagne and the forward used his pace to get in-between Jason Kerr and Liam Gordon as he raced into the Saints box before calmly slotting the ball between Clark’s leg to give the Istanbul side the advantage.

However, Saints were back on level terms on 36 minutes. Ali McCann’s deep corner from the left was headed back across goal by Jason Kerr and Chris Kane got up to make a connection with the ball at the back post as the forwards header took a touch off Galatasaray keeper Çipe before crossing the line. The Turkish side were claiming there had been a foul on Çipe by Kane but the referee Andris Treimanis awarded the goal. 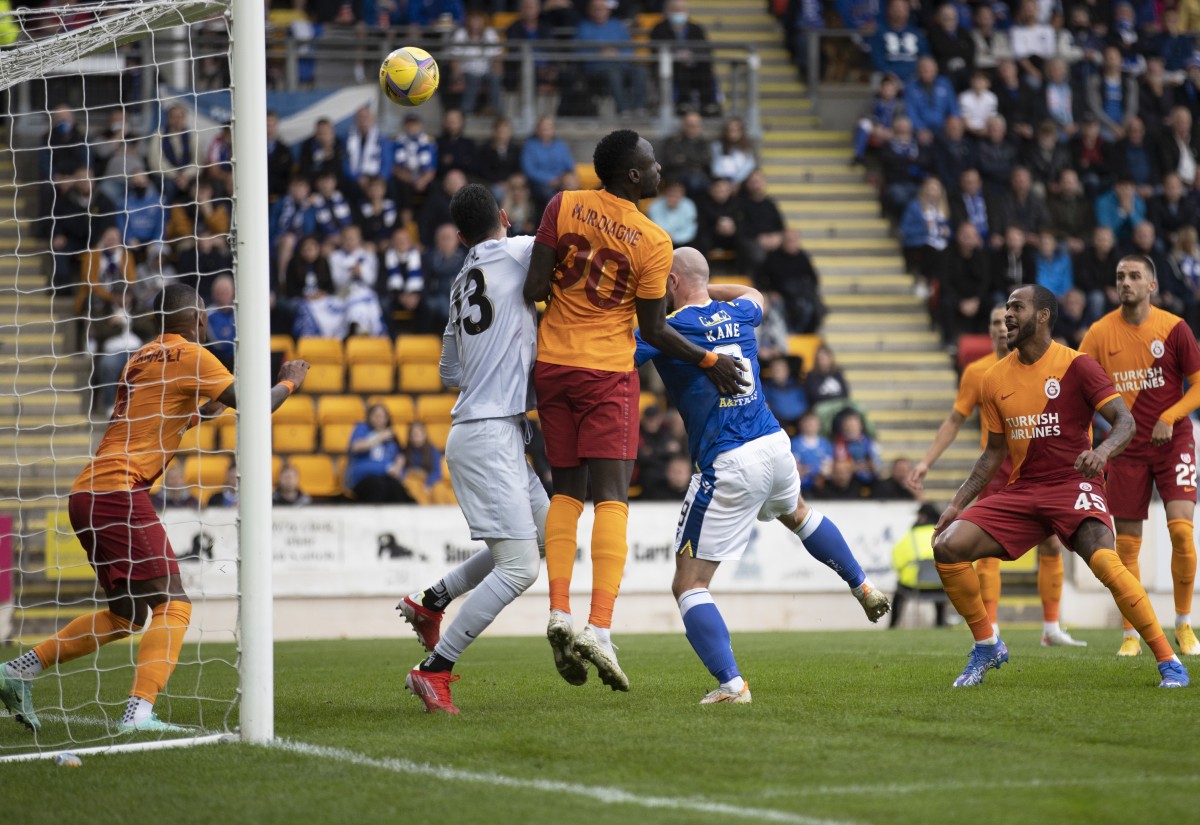 Saints tails were now up and a Liam Craig free kick on 43 minutes was met by Gordon however, the big defender couldn’t direct his header on target.

Galatasaray started the second half the brighter of the two sides and they regain the lead on 64 minutes as Turn played the ball into the path of Aktürkoğlu who powered into the box before slotting the ball into the net.

Callum Davidson then made a double change as Stevie May and Shaun Rooney came on to replace Chris Kane and James Brown.

The visitors were starting to look clinical and they created another chance on 67 minutes but Clark was equal to Feghouli’s strike.

Then a minute later Saints got a sight of goal however May’s strike was saved by Çipe.

Galatasaray got their third goal of the evening on 70 minutes as Aktürkoğlu played in Feghouli and the Algerian winger coolly slotted the ball low past Clark.

Saints then made another change as Callum Hendry was introduced into the action, replacing Liam Craig as they looked to try and get back into the match.

The Turkish Süper Lig side were passing the ball about well and on 73 minutes Boey played a good pass to Taylan Antalyali but his strike was saved by Clark. 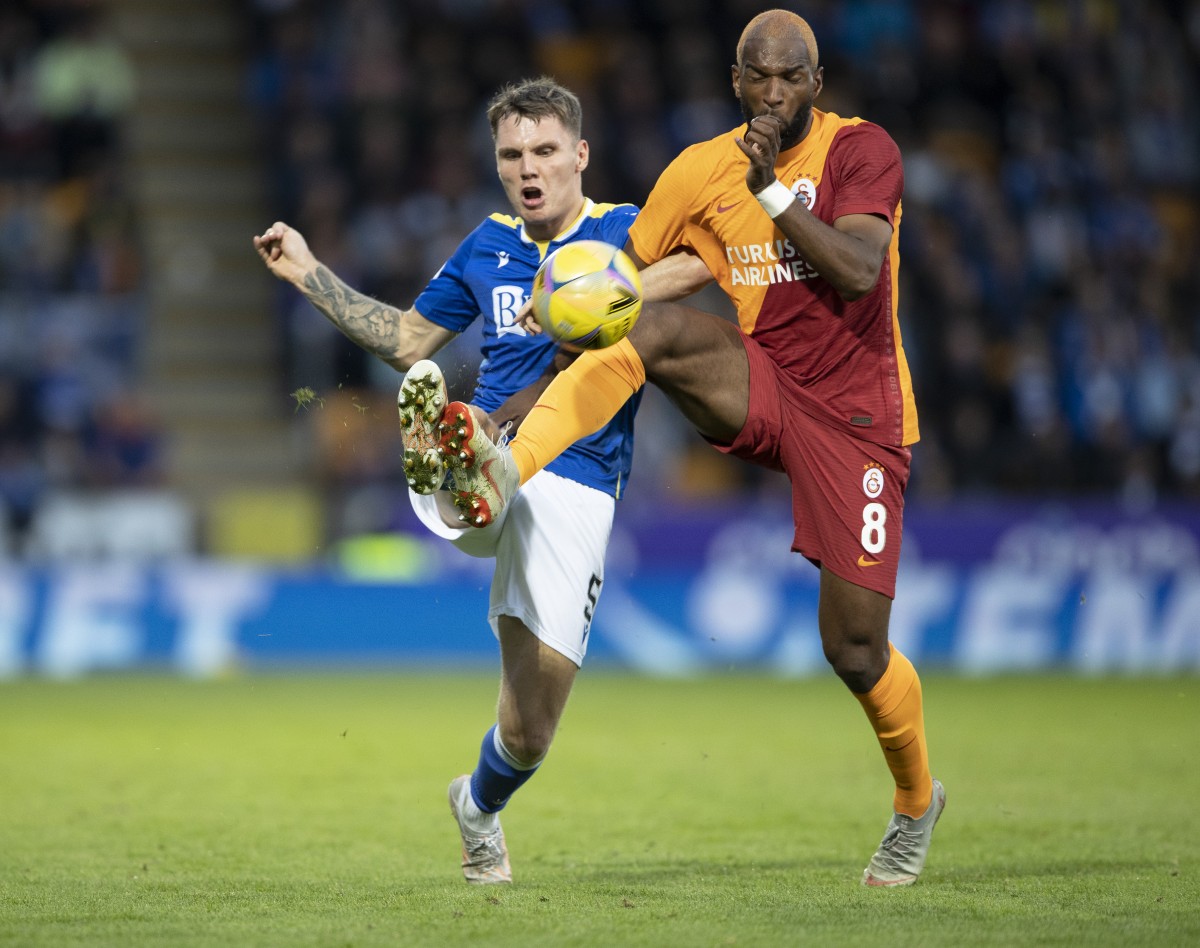 PHOTO: Jason Kerr and Ryan Babel challenge for the ball

On 82 minutes Saints made their fourth change of the evening as Reece Devine came on to replace Callum Booth. Then a minute later Michael O’Halloran did well to win Saints a corner which was taken by McCann. The delivery into the Galatasaray box by the Northern Ireland Internationalist was only partly cleared by Fatih Terim’s side and McCann gathered the loose ball however, his delivery back into the danger area was too high as it went behind for a goal kick.

Patrick van Aanholt almost scored an own goal in the final minute of the ninety but Çipe reacted well to the slack pass back by the Dutch defender. Then as the match entered 4 minutes of additional time Galatasaray got a fourth as Emre Kilinç volleyed the ball home after the Turkish winger took advantage of a rare mix-up in the Saints defence.

O’Halloran scored a consolation for Saints deep into stoppage time after a brilliant run from Rooney which saw him cut inside before sending the ball across the face of the goal which O’Halloran tapped home from close range. 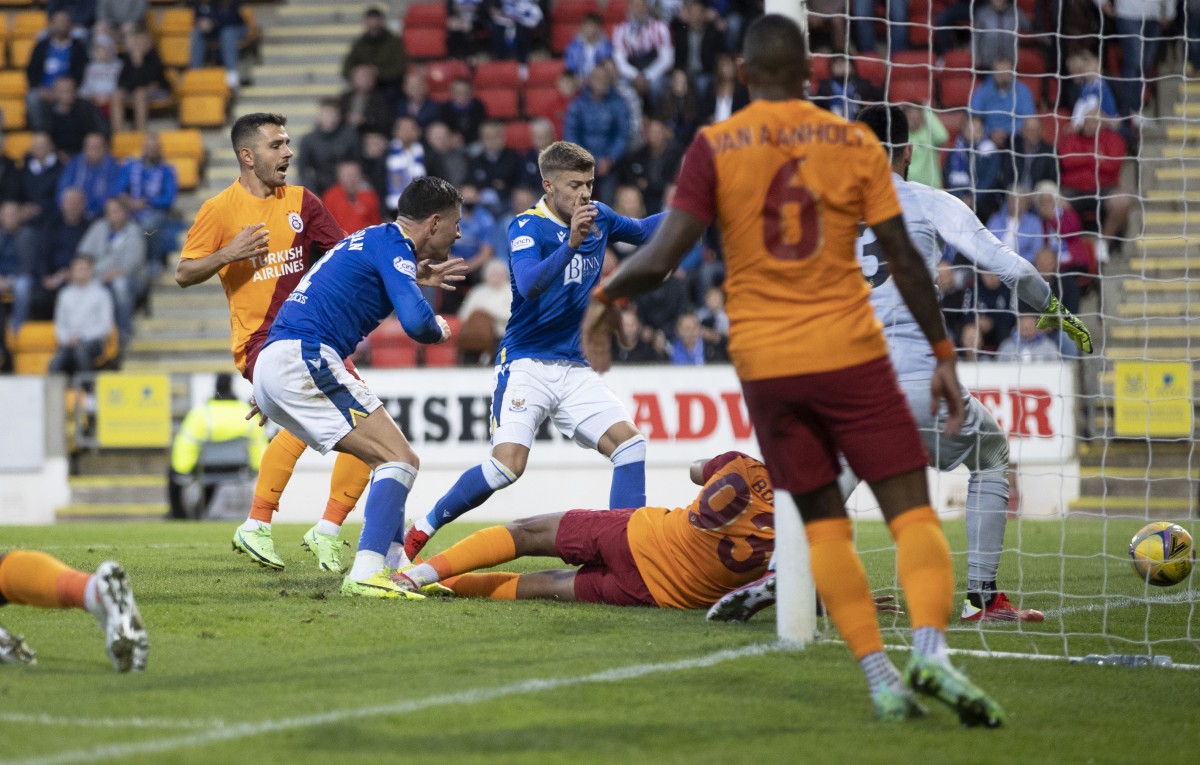 Overall, Saints can be proud of their performance over the two legs against Galatasaray and they can now look forward to their UEFA Conference League play-off against LASK.

Picture: Ali McCann gets away from Kerem Aktürkoğlu