Saints got their cinch Premiership league campaign underway this afternoon as they battled out a goalless draw with Ross County in Dingwall.

The best chance of the first half fell to the hosts as former Saints player Ross Callachan fired inches wide after being setup by Coll Donaldson.

Saints were presented with a great chance to take the lead in the second half as they were awarded a penalty for a foul on Reece Devine. It was taken by Ali McCann but the Northern Ireland internationalist blasted his effort over.

Then late on substitute Liam Craig saw his sliding effort crash off the outside of the post.

Next up for Saints is a trip to Istanbul to take on Galatasaray in a Europa League Third Round Qualifier on Thursday evening, kick off 7pm.

Saints got their league campaign underway this afternoon as they made the trip up the A9 to take on Ross County at The Global Energy Stadium. Saints drew 0-0 with Fleetwood Town in their final pre-season friendly last weekend and Callum Davidson made four changes to the side that start against The Cod Army. Shaun Rooney, Murray Davidson, Ali McCann and Michael O’Halloran came in to replace James Brown, Liam Craig, Craig Bryson and Chris Kane. The Staggies defeated Montrose 4-1 in a Premier Sports Cup Group Stage match in Dingwall last Saturday and manager Malky Mackay made two changes to his starting eleven for this afternoon’s game. Jake Vokins and Alexander Robertson dropped out to be replaced by Connor Randall and Regan Charles-Cook.

The travelling Saints fans were in good voice as David Wotherspoon got the match underway for Saints.

PHOTO: The Saints fans applaud as the players make their way onto the pitch

The first chance of the match came on 3 minutes after County had been awarded a free kick following a foul by Liam Gordon on Dominic Samuel. Blair Spittal took the free kick and he played it out wide to Reagan Charles-Cook who then cut the ball back to Spittal. The midfielder whipped over an inviting cross to the back post picking out former Saints player Keith Watson but the Staggies captain put his header wide. Then shortly after Charles-Cook put his header over after he had got on the end of Samuel cross from the right.

It was fast start to the match by both sides and Saints created their first chance of the match on 9 minutes as Reece Devine saw his strike deflected behind for a corner by Coll Donaldson. David Wotherspoon took the corner from the left, playing it short to Michael O’Halloran who carried the ball along the edge of the box before unleashing a fine strike but his effort was saved by Staggies keeper Ross Laidlaw.

The first booking of the game came on 31 minutes as County’s Jordan White was shown a yellow card for a foul on Jamie McCart. 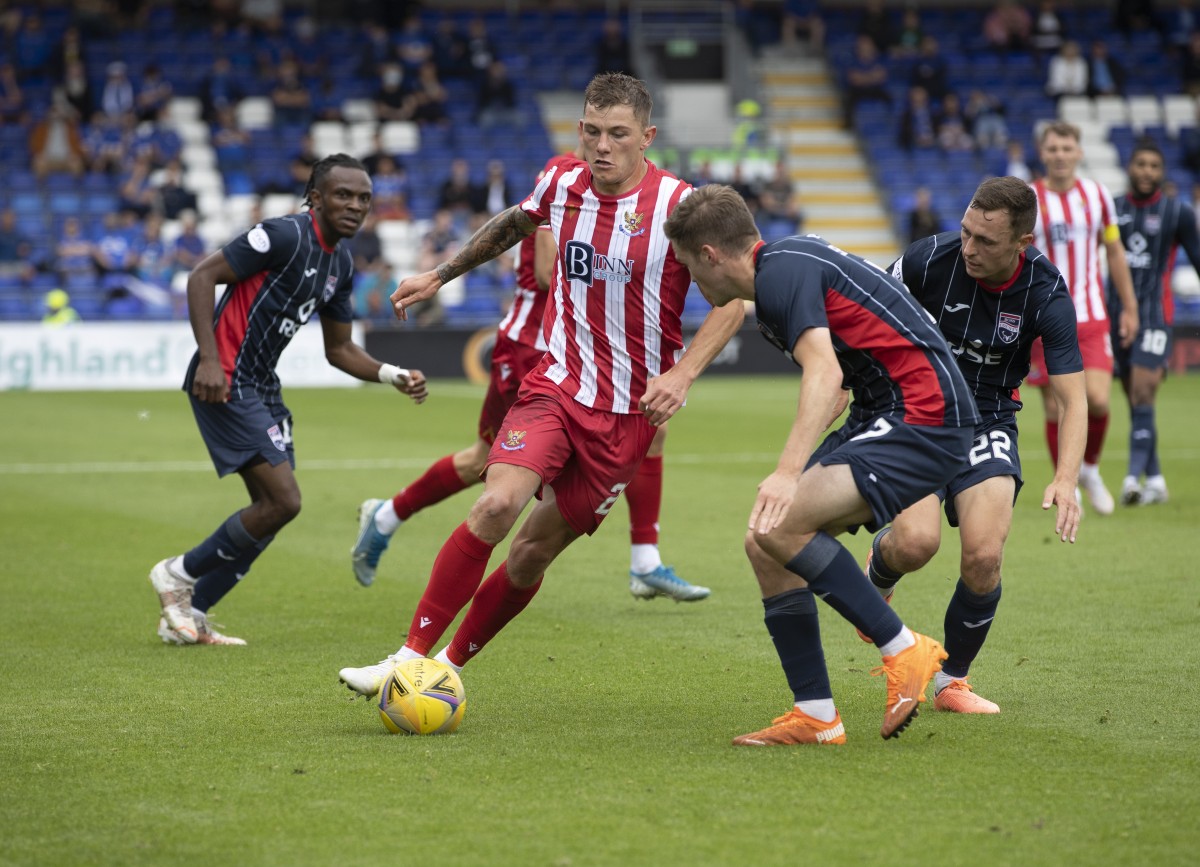 PHOTO: Callum Hendry is closed down by Blair Spittal

Saints were looking dangerous going forward but it The Staggies who almost took the lead with 9 minutes of the first half remaining. Donaldson went on a fine run down the right before slipping a neat ball to former Saints player Ross Callachan but the midfielder put his effort inches wide.

Just before half time a nice pass by Shaun Rooney played in O’Halloran but his left footed effort didn’t trouble Laidlaw.

On 50 minutes Saints were awarded a free kick after Callum Hendry had been fouled by Donaldson. Wotherspoon took the free kick and sent over an inviting ball from the left into the County box however, no Saints players could get on the end of it as the ball went behind for a goal kick.

A good Saints move on 62 minutes saw Wotherspoon play in O’Halloran who used his pace to break forward, evading the challenge from Watson. O’Halloran then tried to pick out Hendry with his cross from the right however, his cut-back was cleared. 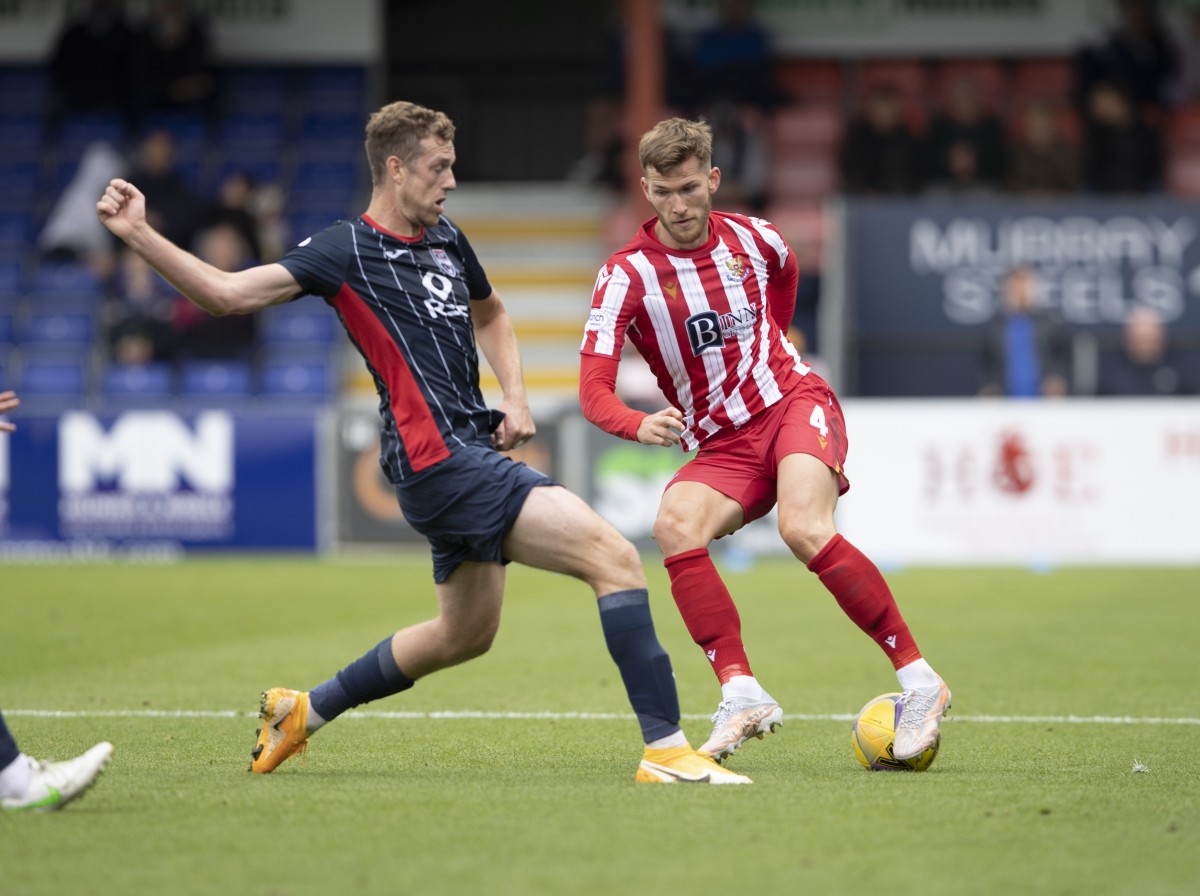 Saints were now on top and 3 minutes later they were awarded a penalty after Devine showed great skill on the ball near the bye-line but was then tripped in the box by Donaldson and referee Colin Steven pointed to the spot. McCann stepped up to take the penalty but he blasted his effort well over the bar.

On 76 minutes Saints made a double change as Chris Kane and Stevie May came on to replace Callum Hendry and Michael O’Halloran.

That was followed by another change on 83 minutes as David Wotherspoon was replaced by Liam Craig and it wasn’t long until the midfielder was involved in the thick of the action. A minute later Kane played the ball back to May who poked an effort towards goal which was palmed by Laidlaw and Craig slide in as he tried to direct the ball over the line but his effort crashed off the outside of the post.

Saints continued to search for that all important goal and they were awarded another free kick out wide on the right after Jason Kerr had been fouled by Harrison Paton. Craig took the free kick and his low effort was turned behind for a corner by Tillson. The corner was taken by Craig but his left footed delivery from the right was headed clear by Shaw.

The one-way traffic continued and Saints got another corner on 89 minutes after a free kick from Craig was headed behind by Shaw. This time the corner was taken from the left and Craig’s delivery picked out May but the Saints forward put his header over as both sides had to settle for a share of the spoils.