A resounding 4-0 win for Saints against Inverness CT this evening saw Callum Davidson’s side defeat the Highlanders 6-2 on aggregate to retain their cinch Premiership status.

After a goalless first half Saints took the lead 50 seconds into the second half as substitute Stevie May smashed the ball home from close range after Melker Hallberg’s header had been saved on the line by Mark Ridgers. Saints then doubled their lead on 53 minutes thanks to a deflected Cammy MacPherson strike.

Callum Hendry added a third on 87 minutes as he dinked the ball over Ridgers and then in the final minute of the match Shaun Rooney rounded off the scoring with a fine finish to spark wild celebrations.

All eyes were on McDiarmid Park this evening as Saints welcomed Inverness Caledonian Thistle for the second leg of the cinch Premiership Play-Off Final to decided who would play in next seasons cinch Premiership. Inverness CT came from two goals down to draw 2-2 with Saints on Friday evening and Callum Davidson made one change to his starting eleven this evening as John Mahon came in to replace the injured Jamie McCart. There were four changes to the Inverness CT starting eleven this evening as Head Coach Billy Dodds brought in Wallace Duffy, Danny Devine, Logan Chalmers and Austin Samuels to replace Lewis Hyde, Aaron Doran, Cameron Harper and Joe Hardy who all dropped to the bench.

The atmosphere inside McDiarmid Park was electric as Murray Davidson got the match underway for Saints. Caley Thistle created the first opportunity of the match as Robbie Deas played the ball into the feet of Logan Chalmers but the strike from the on-loan Dundee United forward was comfortably gathered by Zander Clark.

The first booking of the game came on 5 minutes as Cammy MacPherson was shown a yellow card for a foul on Kirk Broadfoot. Caley Thistle captain Sean Welsh took the free kick as he played it into the box to Danny Devine but the defender put his header wide.

The visitors came close to taking the lead on 9 minutes as Zander Clark took a fresh-air swipe at a Dan Cleary back pass but luckily for Saints the ball rolled just wide of the post for a corner. 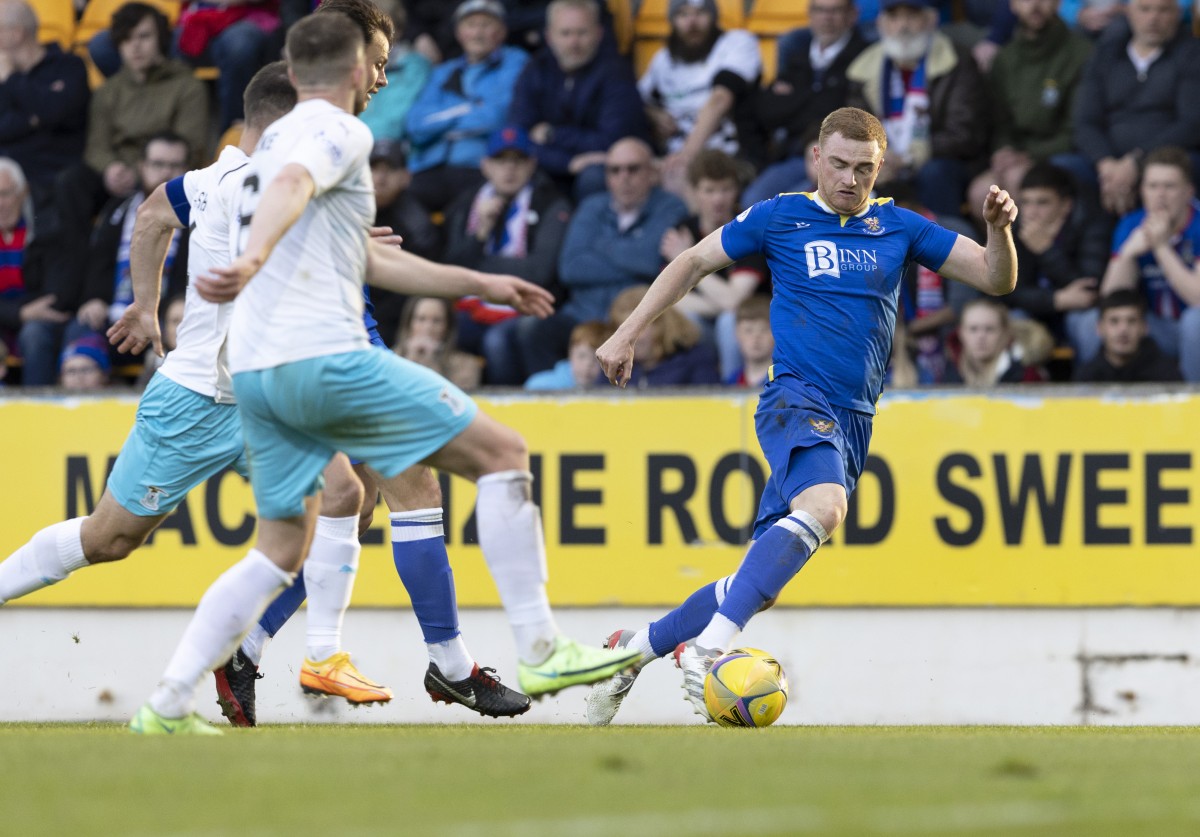 On 15 minutes Saints were awarded a free kick on the byline after James Brown was fouled by Broadfoot however, Hallberg’s delivery into the box from the free kick was cleared by the Caley Jags rearguard.

Inverness were looking a threat going forward and 5 minutes later Billy Mckay had a strike at goal saved by Clark.

A determined run shortly after by Shaun Rooney down the right saw him win Saints a corner. It was taken from the right by Hallberg and his delivery was met by Dan Cleary but the defender couldn’t direct his header on target. 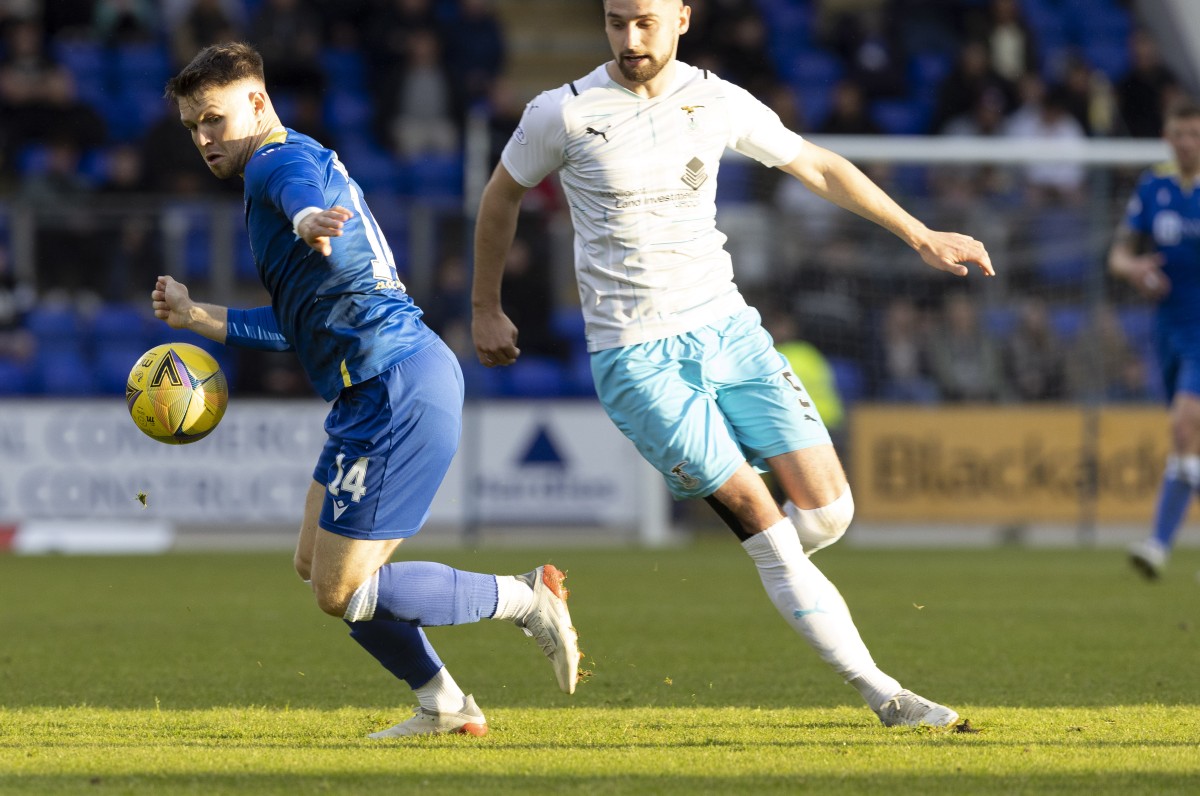 The visitors continued to create the better of the chances and just before the half an hour mark Mckay found Austin Samuels in the box and his strike was parried by Clark before Saints were awarded a free kick after Samuels was judged to have fouled Liam Gordon as he went for the rebound. The Saints skipper was involved in the thick of the action again on 32 minutes, this time he made a crucial challenge to turn the ball behind for a corner after Samuels had been played in by David Carson.

As the match approached half time there were chances at both ends as firstly the ball dropped to Callum Hendry in the box however, he couldn’t get his shot away as Inverness cleared their lines. Play then quickly switched to the other end as Samuels looked to hit Saints on the break but Clark was quick off his line to clear the danger.

Callum Davidson made a change before the second half could get underway as Stevie May came on to replace Glenn Middleton and the substitution would have an immediate impact. Barley a minute into the second half Saints took the lead as Brown’s cross into the box was met by Hallberg but Mark Ridgers made a smart save from point blank range as he clawed the ball off the line. However, May reacted quickest to the loose ball to slam it home from close range. 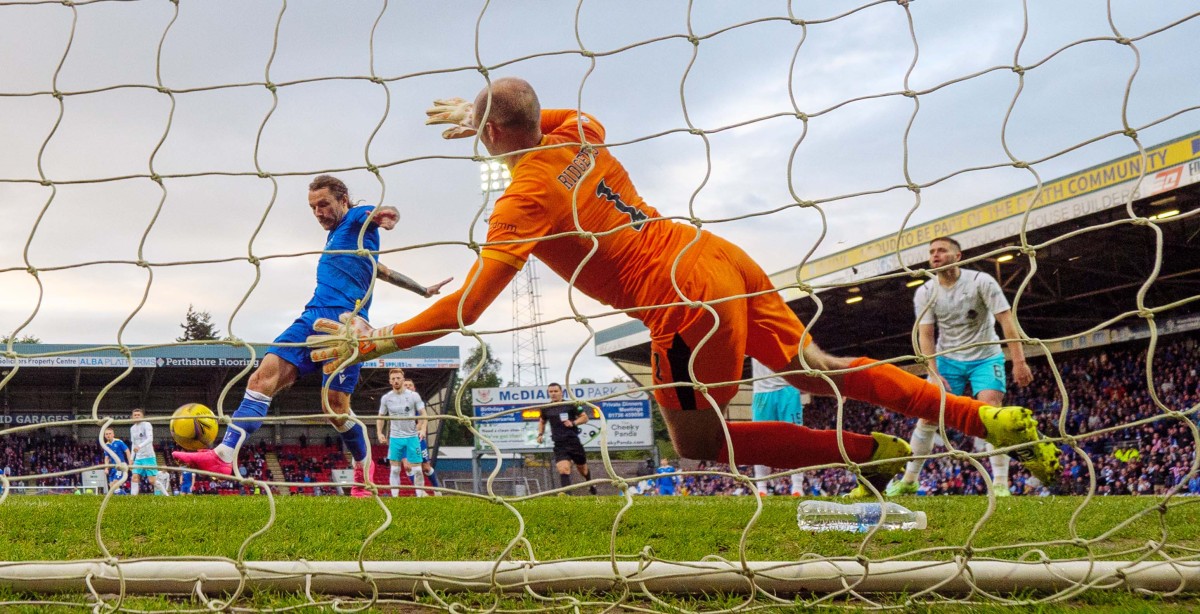 PHOTO: Stevie May opens the scoring for Saints

Saints then gave themselves some breathing space as they doubled their lead on 53 minutes. Brown played the ball into the feet of Cammy MacPherson who unleashed a strike from 25 yards which took a deflection off Sean Welsh to take it past a helpless Mark Ridgers in the Caley Jags goal.

The quick attacking football we saw from Inverness during the first half was non-existent during the early exchanges in the second half hour on 62 minutes space opened up for Samuels as powered his way to the edge of the box but Clark got down well to make a smart save.

Inverness made their first change of the game on 65 minutes as Logan Chalmers made way for Aaron Doran who was quickly involved in the action. 2 minutes later the Irish winger played a corner in from the right which was flicked on to Wallace Duffy and the former Saints defender unleashed a shot at goal which was brilliantly blocked by John Mahon. Doran then had a go himself shortly after as he collected the ball on the edge of the box from Robbie Deas but his right-footed effort went wide of the target.

Saints continued to push for a third knowing that a goal for Inverness would pull them back into the tie and on 77 minutes Hallberg saw his left footed strike go wide. Saints though could feel more relaxed with 3 minutes remaining as Hendry did well to peel off to remain onside as he was played in by Hallberg and the Saints forward then raced into the Caley Thistle box before lifting the ball over Ridgers and into the net to spark wild celebrations. 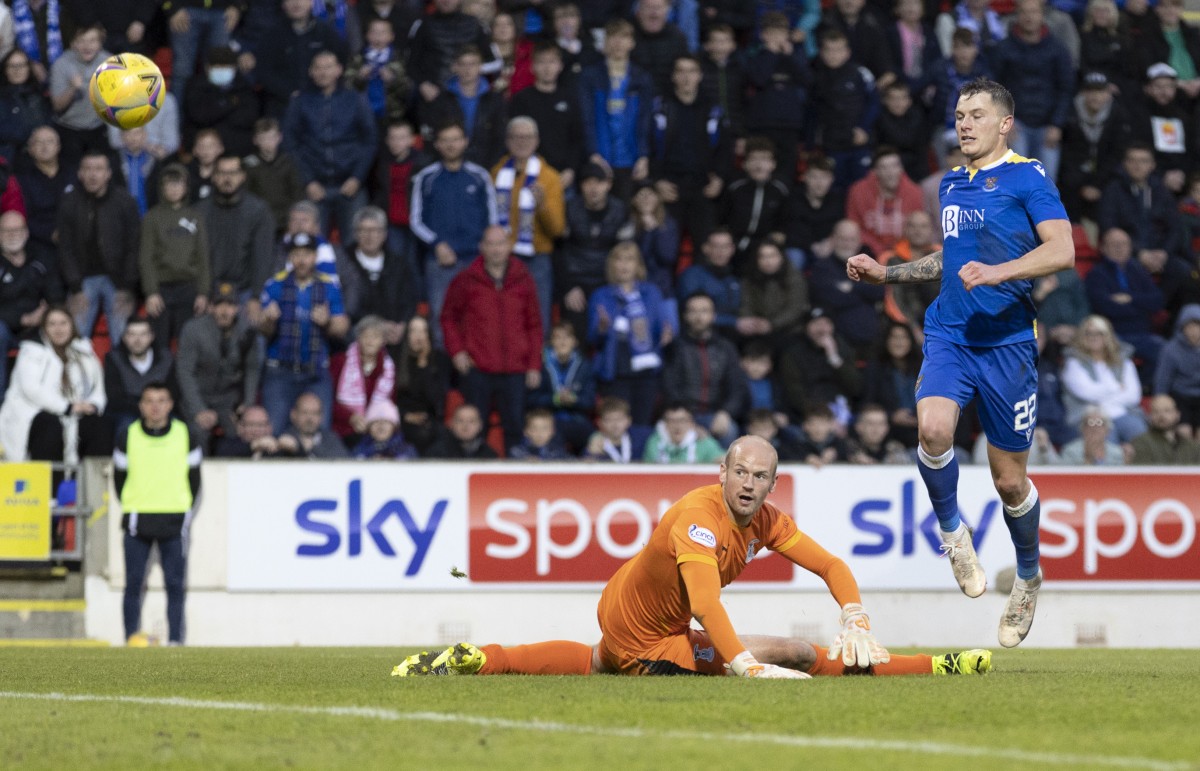 Saints though were not done and the icing on the cake came in the final minute. Cleary carried the ball forward into midfield before playing in Rooney who burst forward in what was almost a carbon copy move to Hendry’s goal and as Rooney got into the box he dinked the ball over Ridgers to seal a resounding victory for Callum Davidson’s men. 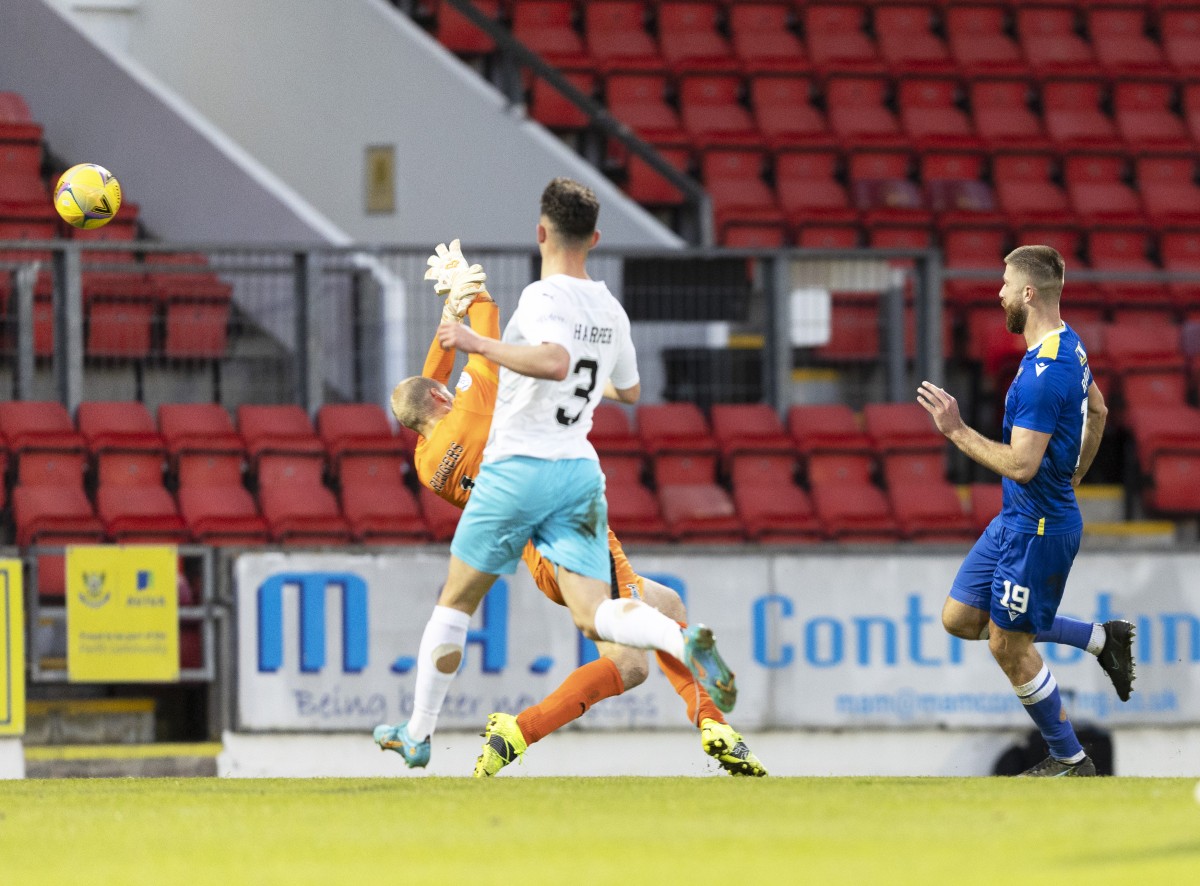 PHOTO: Shaun Rooney seals a resounding win as he dinks the ball over Mark Ridgers

Samuels almost netted a consolation for the visitors in stoppage time as he was played in by substitute Joe Hardy however, the former Wolverhampton Wanderers forward fired wide of Clark’s goal.

Referee Nick Walsh then blew for full time and there was an outpouring of relief and emotion both from the stands and the players and management team as Saints secured a fourteenth consecutive season of top flight football. Mission accomplished.